Impudent Turkey and its airspace 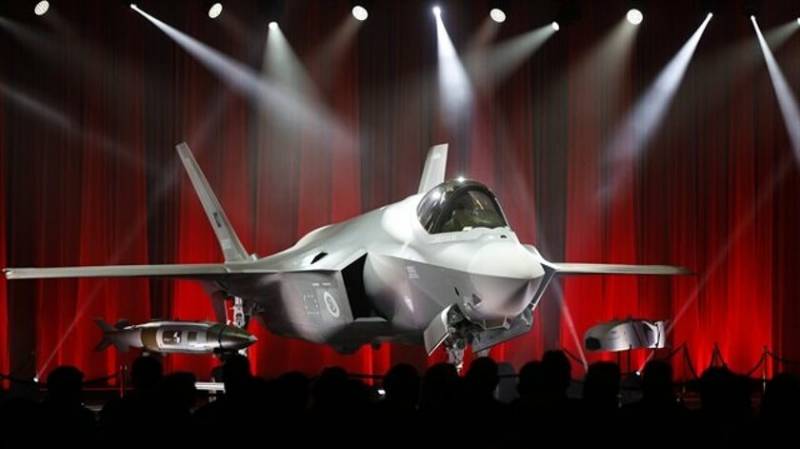 The first Turkish F-35A was introduced at the Lockheed Martin factory in Fort Worth in June 2018, after which delivery was suspended by the U.S. Congress.

The United States and Turkey have been part of the same NATO bloc since 1952 and have some common and vital interests, but the strategic relationship, apparently, between the two countries has ended. Although Turkey formally remains a NATO ally, it is not currently a US partner. Turkey has vowed to continue the fight against American-backed Kurdish formations, which it considers a terrorist organization, after President Donald Trump warned of economic chaos that would overtake Ankara if she dared to attack the Kurdish militia after a hypothetical withdrawal of the US military.

Regular tensions between Washington and Ankara escalated again in March 2019, when NATO Supreme Commander-in-Chief General Curtis Scaparotti warned that if Turkey buys Russian S-400 anti-aircraft systems, the United States will not supply F-35 fighters and will be forced to consider a ban on the purchase other military technologies. In addition to the concerns expressed about the joint operation of the S-400 complex in conjunction with American aircraft, Scaparotti also did not ignore the incompatibility of the Russian anti-aircraft complex with NATO systems. In response to the general’s statement, Turkish President Erdogan said the deal on the Russian S-400 complex has nothing to do with the Pentagon and should not in any way affect the purchase of F-35 fighters.

Since the start of the F-1999 Joint Strike Fighter (JSF) fighter program in 35, Turkey has been a third-level Lockheed Martin partner, resulting in the first aircraft delivery ceremony held in Texas in June 2018. 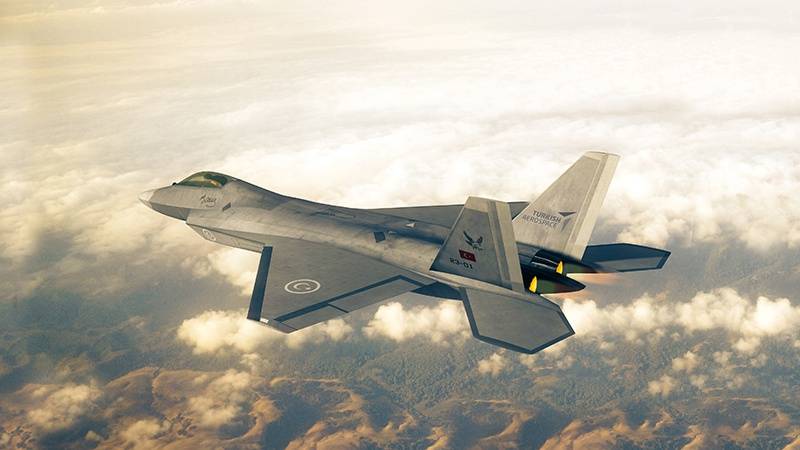 However, the sale of the F-35 to Turkey was postponed by the US Congress in August 2018 as part of the National Defense Powers Act, pending the Pentagon’s report on evaluating the necessary measures and the full cost of reducing F-35 shipments to Turkey; deadlock continues to this day.

Any delay in adopting the F-35A will be a serious concern for the Turkish Air Force, which is still recovering from the effects of the failed military coup in July 2016, which was supported by some Air Force officers, while others defended the government. More than 200 officers, including the former chief of staff, and a large number of pilots were arrested and dismissed from service.

However, TAI, recently renamed Turkish Aerospace, implements a number of ambitious military programs. At the top of this list is the TF-X program, officially known as National Combat Aircraft, whose goal is to replace F-16 fighters. The fifth-generation TF-X fighter will have a maximum take-off weight of 27215 kg, a length of 19 meters and a wingspan of 12 meters. 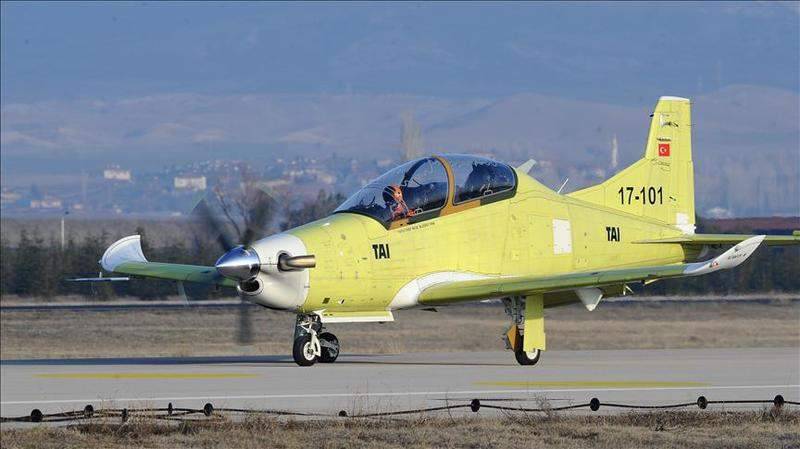 The first of the 15 basic Hurkus-B training turboprop aircraft for the Turkish Air Force took off in January 2018
It will have two turbojet engines with an afterburner with a capacity of 90 kN each. It is expected that it will have an operational range of over 1100 km, a practical ceiling of over 16700 meters and a maximum speed of Mach 2. The TAI said that it was planned to use the TF-X with F-35A fighters, which were supposed to be purchased by Turkey from the United States, adding that the TF-X was planned to be produced until 2070. According to Ankara’s policy on local defense assets, TAI and its industrial partners aim to produce gliders with a small effective reflection area, TF-X engines, ammunition, situational awareness components with the function of merging signals from different sensors in Turkey.

In November 2018, the Turkish Minister of Defense said that the TAI with the Ministry of Defense, in accordance with its obligations, should conduct the first flight tests of the TF-X prototype with the General Electric F110 engine in 2023, while noting that this is the "main goal" of the Turkish government.

In January 2015, TAI and the Department of Defense issued a BAE Systems contract worth over £ 100 million to help design the TF-X. Under a four-year contract, BAE must provide TAI with 400 man-years of engineering advice and technical support. Upon completion, BAE is expected to receive another contract to support the development of TF-X in Turkey.

As for the TF-X turboprop engine program, the Turkish Ministry of Defense emphasized that its options are still being considered. At the same time, the British government issued an export license to Turkey, allowing Rolls-Royce to cooperate with the private Turkish company Kale Group, as a result of which in May 2017, the TAEC joint venture Ucak Motor Sanayi AS was created. Rolls-Royce planned to train 350 Turkish engineers and use the technical capabilities of Turkey as part of the development process. 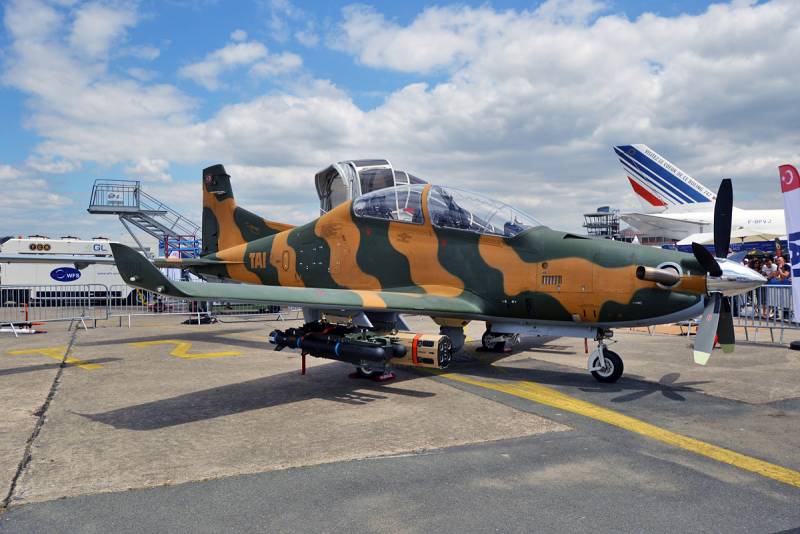 12 Hurkus-C light reconnaissance / attack aircraft equipped with optoelectronic reconnaissance and sighting system ordered by Turkish Air Force
However, the Turkish Ministry of Defense made it clear that Turkey will not depend on one country in the TF-X program, saying that “when you work with one company or when you depend on one country, you may encounter various problems at different stages of the project ". Turkey also launched its own TF-X engine development program with the organization of the TRMotor consortium, which could include foreign companies.

In December 2018, it was reported that Rolls-Royce and its partner Kale Group offered the Turkish government improved conditions for the development of the TF-X fighter, although at the same time, the British company confirmed that it was limiting its participation in the project. Disagreements between the two sides arose due to problems related to the transfer of intellectual property, and although this was not confirmed by Rolls-Royce, they stated that it was still participating in the project and continued to explore opportunities with its Turkish partner.

At the 2018 Farnborough International Airshow, TAI showed off a mockup of its training single-engine fighter, Hurjet. According to the TAI representative, according to the schedule, Hurjet is supposed to make its first flight in 2022, and the first aircraft should be adopted by the Turkish Air Force in 2025. In July, TAI, the Defense Procurement Administration and the Turkish Air Force signed an agreement on the Hurjet project to build five prototypes in two different configurations - the AJT (Advanced Jet Trainer) training fighter and the LCA (Light Combat Aircraft) light combat aircraft. TAI intends to create a fighter with a speed of Mach 1,2, which will allow pilots to seamlessly switch from a turboprop fighter to a 5th generation fighter. The new Hurjet will replace the fleet of T-38 aircraft, which TAF updated in 2011-2016. 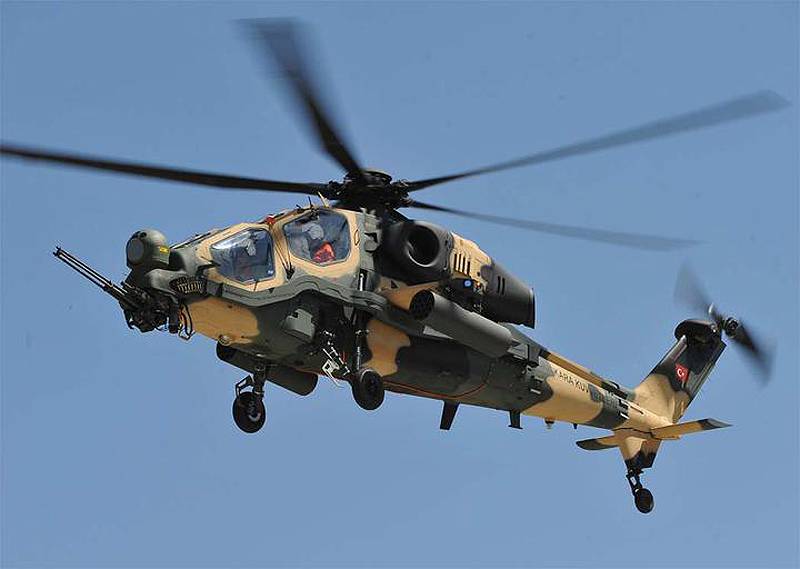 Attack helicopter T129 ATAK is supplied by the Turkish Air Force, and also selected by the Pakistani army
TAI's Hurkus-B base turboprop trainer is equipped with the BAE Systems lightweight LiteHUD projection on-board indicator in the front cockpit, multi-function computer displays and Martin-Baker Mk T16N ejection seats. The Air Force ordered 15 of these machines. Turkish Aerospace is also developing a light assault / reconnaissance version of the Hurkus-C, which is equipped with seven attachment points (three under each wing and one on the fuselage) that can carry an external load of up to 1500 kg. The aircraft can carry a fuel tank of 318 liters in external suspension. The weapons complex includes Roketsan UMTAS / LUMTAS anti-tank missiles, 70-mm Roketsan Cirit laser-guided air-to-surface missiles, GBU-12 laser-guided bombs, MK.81 and MK.82 unguided bombs, BDU-33 and MK-106 and HGK-3 INS / GPS and KGK-82 guidance kits for universal bombs. The aircraft can also be armed with a 12,7 mm machine gun and a 20 mm machine gun.

Turkish Aerospace is actively involved in the design and manufacture of rotorcraft, including the twin-engine twin-engine attack helicopter T129 ATAC based on the AgustaWestland AW129 Mangusta. A total of 59 T129s were delivered, and in June 2018, Pakistan signed a $ 1,5 billion contract with TAI to supply 30 T129 ATAK attack helicopters. However, after the deterioration of relations between the United States and Turkey, the US Department of Defense refused the export license necessary for the T800-4A turbo engines for T129 manufactured by LHTEC, a joint venture between Honeywell and Rolls-Royce. 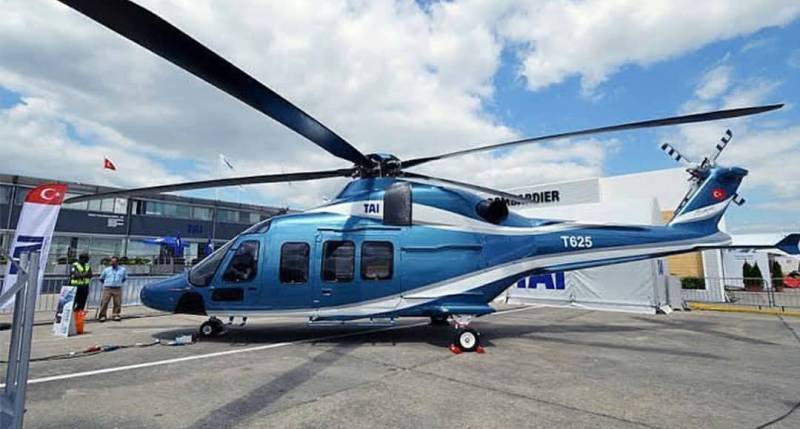 The multi-purpose six-ton ​​T-625 with turboshaft engines is designed to perform both civilian and military tasks
In February 2019, the Turkish Defense Procurement Authority signed a contract with Turkish Aerospace for the Heavy Class Attack Helicopter project. The Heavy Class Attack helicopter, designated T130 ATAK-2, will have two engines that rotate the five-blade main propeller and an armored cockpit of a tandem configuration for the pilot and gunner. A modular avionics kit will be installed in it, which includes a four-coordinate autopilot and helmet-mounted displays for the crew. Turkish Aerospace will design and build an advanced attack helicopter capable of carrying a large target load, resistant to external factors and equipped with modern tracking and visualization systems, electronic countermeasures, navigation, communications and weapons. The Heavy Class Attack Helicopter, which is scheduled to take off in 2024, will be another project designed to play an important role in reducing the external dependence of the Turkish defense industry.

Tusa Engine Industries (TEI), a subsidiary of Turkish Aerospace, leads the development of a 1400-hp turboshaft engine. for the ATAK-2 Heavy Class Attack Helicopter helicopter and the T-625 multipurpose helicopter, which made its first flight in September 2013. A new generation T625 helicopter weighing 6 tons with two engines, accommodating two crew members and 12 passengers, is intended for military, paramilitary and civilian tasks. Its modern avionics, new transmission and propeller system allow the helicopter to feel great in hot climates and alpine conditions. 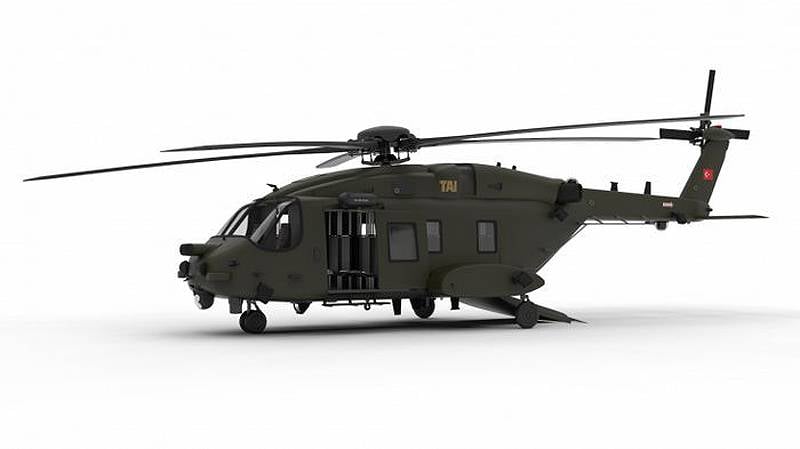 Turkish Aerospace is also actively developing unmanned aerial vehicles aviation systems. The long-duration medium-altitude UAV ANKA made its first flight in December 2004. The UAV is 8 meters long and has a wingspan of 17,3 meters and is equipped with a 155 hp engine. An initial order for 10 ANKA Block-B drones and 12 ground control stations has been delivered to the Turkish Air Force. In October 2013, Turkish Aerospace began a new project to create the next model, designated ANKA-S. 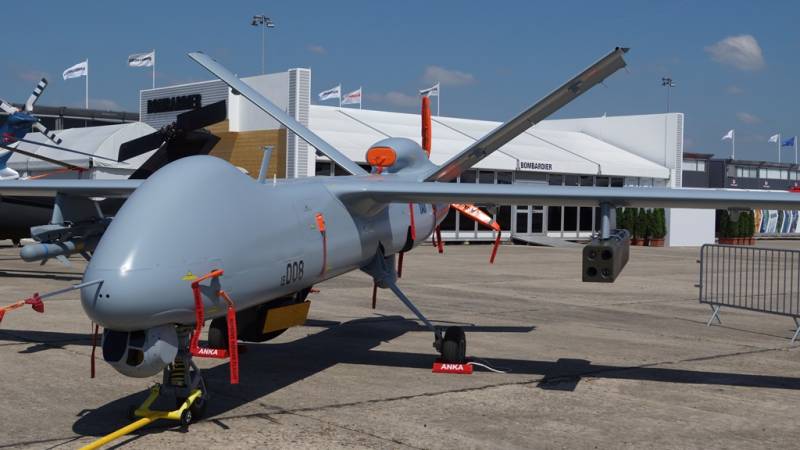 Long-range mid-range drone ANKA-B is supplied by the Turkish Air Force, while the ANKA-S version is still under development
Subsystems developed in the country, such as the Aselsan CATS optoelectronic camera in addition to the ASELFUR 300T and SARPER systems, are installed on the ANKA-S UAV. If the UAV ANKA Block-B due to the Link Relay system can have a flight range of more than 200 km, then the new version of ANKA-S has satellite equipment that allows you to fly autonomously out of direct line of sight. The ANKA-S ground control station can control up to six UAVs simultaneously using Ku-band satellite communication channels with a bandwidth of 10 Mbps. The location system developed in Turkey, the national friend or foe system, MILSEC-3 radio communication with data encryption, and radio relay communication were integrated into the ANKA-S drone. Technical and flight training on the system supplied by the Turkish Air Force began in October 2017 and was successfully completed.

Despite the political turmoil that is tearing the country apart, Turkey is preparing to significantly increase its defense budget for 2020, and Turkish Aerospace, which seeks to develop its success in the Turkish defense industry through the competent use of international and national experience, will be one of the main beneficiaries.