Anti-torpedo protection by J. G. Jones. A step away from the breakthrough 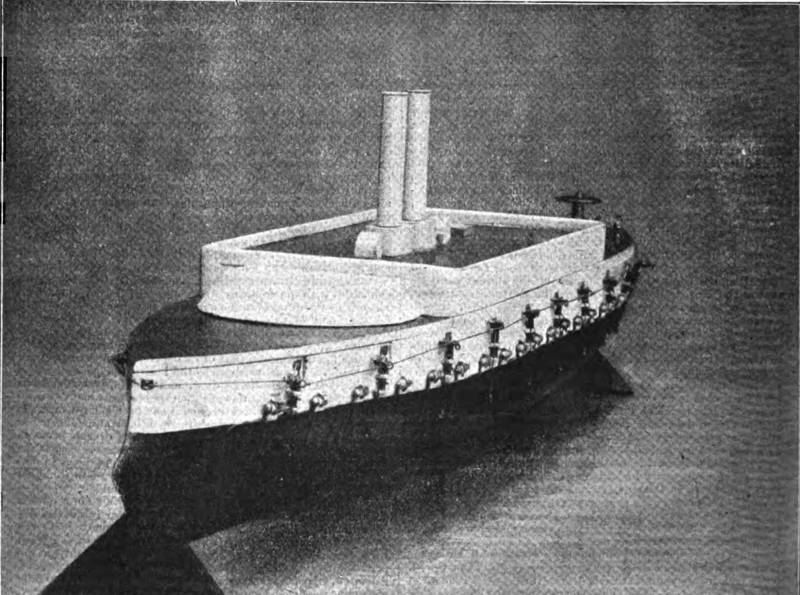 The layout of the ship with the protection of Jones. Photo by Marine Engineer / vova-modelist.livejournal.com

Self-propelled mines or torpedoes, which became widespread at the end of the XNUMXth century, were a serious threat to any warships. Various methods of protection against them were created and tested, but not all such inventions showed the desired result. At the turn of the century, British inventor Dr. George Horatio Jones offered his protection options.

The appearance of torpedoes provoked the development of anti-torpedo protection, and by the end of the XIX century. practically applicable results were obtained. The protection of ships at that time was divided into two main areas: the struggle against torpedo launchers and the prevention of hits were provided weapons into the ship.

To protect the ship from torpedo hit, special nets were used that were lowered into the water around the hull in the presence of a threat. However, setting up the network took a lot of time and was complicated, and with the deployed network the ship drastically lost speed and maneuverability. In addition, the network interfered with casemate artillery and thereby reduced the combat qualities of the ship. The answer to this protection was special cutting devices mounted on torpedoes.

The nets were useless, and therefore new anti-torpedo protection projects provided for the improvement of the ship's design. It should be finalized and improved with the expectation that hitting a torpedo would not lead to the death of the ship, and preferably even to the loss of combat readiness.

The first draft of J. Jones

In 1894, J.G. Jones applied for the registration of the invented means of protecting ships from torpedoes. Later, in 1897, an article by the inventor under the loud title “The Defenseless Navies of the World” was published in the British journal Marine Engineer and Naval Architect on March 1. It described the basic principles and advantages of the invention. 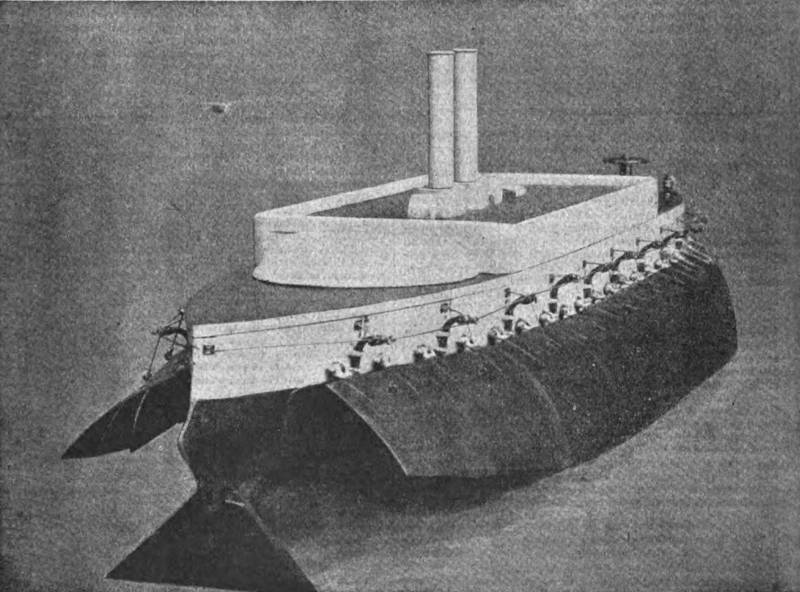 Shields in a fighting position. Photo by Marine Engineer / vova-modelist.livejournal.com
The invention of J. Jones was to equip the underwater part of the ship's hull with additional shields, the shape of which would repeat the contours of the sides. Shields should be made of steel with the desired strength characteristics. On the upper edge of the shield, nodes were provided for suspension to the board. Some means for controlling the position of the shields were to be included in the defense complex. However, technical details of this kind were not given in the article.

In the transport position, the shields literally stacked on the underwater part of the hull sides. The inventor believed that due to this they would not spoil the characteristics of the ship. In the event of a threat, the shields should be raised and placed at an angle to the hull. Curved aggregates were supposed to form an additional fence around the body, covering its side projections.

As conceived by G. Jones, the torpedo was supposed to hit the shield and detonate. The significant distance between the shield and the hull side reduced the effect of the shock wave on the ship. The proposed design was believed to have significant advantages over existing anti-torpedo networks. She could block all dangerous angles, did not interfere with casemate guns, and her transition to a combat position took less time.

The inventor managed to enlist the support of several officers of the UK Naval Forces and the development of some of the necessary documentation. Also made a model of the ship with the original anti-torpedo protection. However, things did not go further. A potential customer in the person of the Admiralty criticized the invention and did not want to help with its development.

The main complaint concerned the mass of the structure. In fact, it was proposed to equip the ship with two sides, which led to an understandable increase in mass and displacement, as well as to obvious losses of various kinds. In addition, the question of the system of raising the shields remained unresolved. She could take up space inside the case, needed some drives, etc.

Dr. Jones continued his work and a few years later proposed a new version of anti-torpedo protection. He took into account criticism of the previous project and reworked it in the most serious way. Only basic provisions of architecture and principles of work remained unchanged. In 1899, the inventor completed the project and applied for a patent. 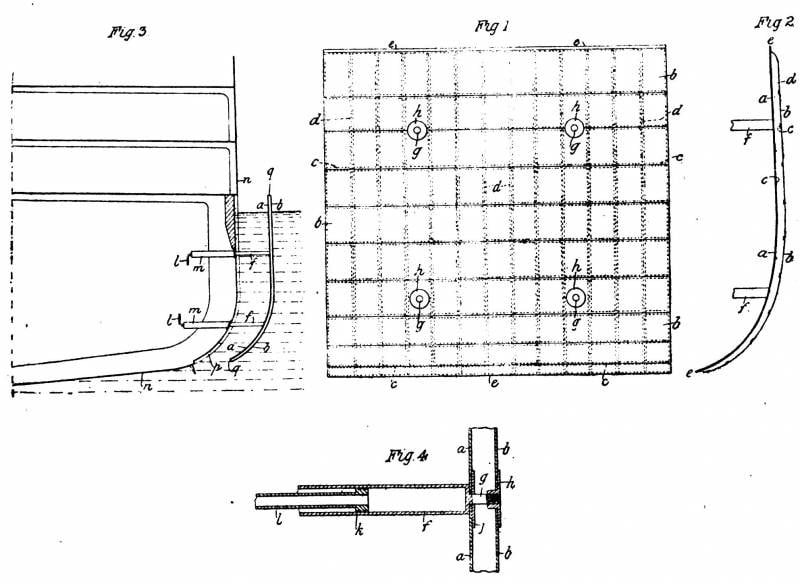 The protection scheme of the second version. Graphics from Shipbuilding and Marine Engineering International / vova-modelist.livejournal.com
A description of the updated anti-torpedo protection was published in October 1901 in the journal Shipbuilding and Marine Engineering International. The article “The Jones Buoyant Torpedo Guard” recalled the previous project and reviewed a new one.

As before, it was proposed to equip the underwater part of the ship with side shields that repeat the shape of the hull. The shield was proposed to be made in the form of a box-shaped system based on a trellised power set with metal sheathing and sealing joints. The internal cavities were supposed to create Archimedean force and, at a minimum, compensate for the weight of the structure.

The previous project involved mounting the shield on a hinge. Now, J. Jones proposed using a set of hydraulic or other cylinders placed across the body. In the transport position, the shield should literally lie on the hull, and in combat - should be advanced with the help of cylinders to a predetermined distance from the side.

The inventor again hoped that the torpedo would explode when hit by a retractable shield. The distance between it and the hull was supposed to help dissipate the energy of the explosion and thereby protect the ship from damage.

Thus, in the second draft, Dr. Jones solved the main problems of the first, but managed to maintain all of his positive qualities. Properly designed retractable shields did not affect the mass of the ship, nor did they interfere with artillery, almost did not spoil the running characteristics, etc. 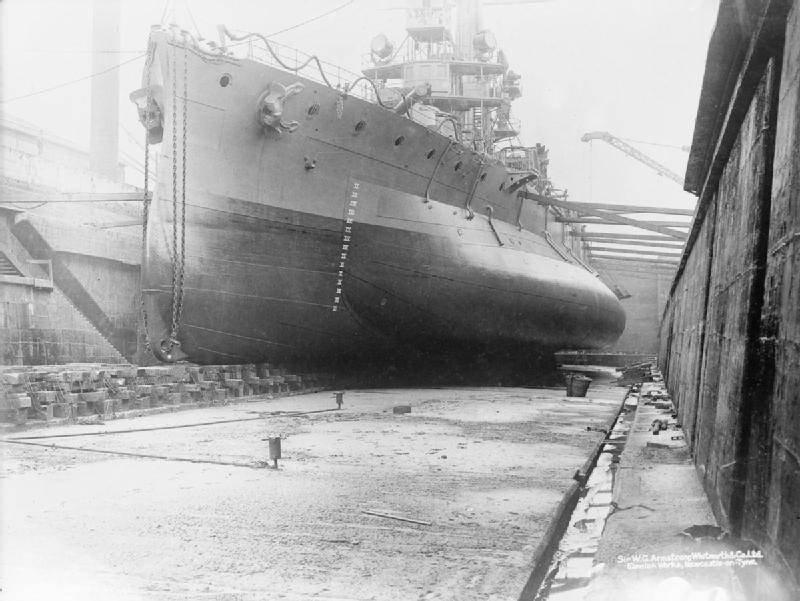 HMS Glatton Coast Defense battleship in a dry dock. The full anti-torpedo port on the port side is clearly visible. Imperial War Museum Photos
However, this time, the potential customer was not interested in the offer. However, other work to create anti-torpedo protection continued, and subsequently led to real results. With all this, the second draft of J. Jones probably did not even reach the construction of the layout. KVMF preferred other developments.

A step away from the breakthrough

In the years 1894-1901. Dr. George Horatio Jones proposed two options for equipping ships for protection against self-propelled mines, but none of them reached practical implementation. After the second failure, the inventor took up other projects in other areas and no longer returned to the topic of anti-torpedo protection. And, it seems, in vain - he stopped literally a step away from a real engineering breakthrough.

The second option of protection, like the first, could be developed with some changes. So, it was possible to abandon the idea of ​​extending the shields and simply fix them at a distance from the body. To improve the flow around such a structure, it was necessary to close the gaps between the upper and lower faces of the shield and the side of the hull. The resulting cavity could be drained.

A similar design work a few years later was done by other engineers. This type of protection confirmed its characteristics and then became widespread under the name "anti-torpedo bul." Such units were used on many warships from different countries and repeatedly confirmed their potential in a real battle. Also, various options for exploded reservations, remotely similar to the J. Jones systems, were explored.

For unknown reasons, Dr. Jones did not develop the second version of his project and was unable to get ahead of the competition in the invention of effective remedies. However, we should not forget that at that time scientists and engineers did not have our knowledge, and they had to search for optimal solutions - by the method of successive trial and error. And this process did not always immediately give the desired result.

We are in Yandex Zen
"Sea Spider" in the fight against torpedoes
Coastal Warships: Modern Approach
47 comments
Information
Dear reader, to leave comments on the publication, you must to register.