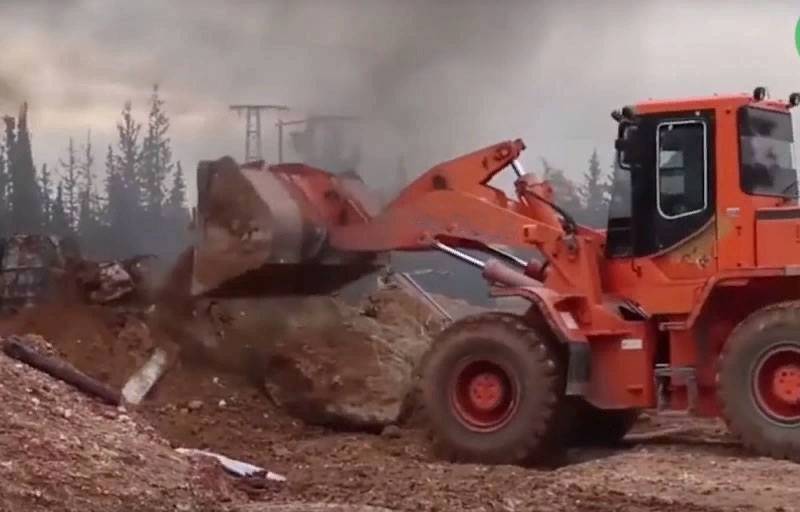 Turkey seems to have heeded the Russian and Syrian demand for the release of the M4 highway in Idlib province. The militants of the pro-Turkish formations began dismantling the obstacles and barriers that they themselves created.


Bulldozers owned by pro-Turkish armed groups have begun clearing sections of the M4 highway. According to available information, the Turkish military command issued an order to clear the road. However, according to other information, the militants clear the way only for passing Turkish patrols, and they do not intend to let the Russian military police through.

In turn, Syrian government forces are busy clearing the M5 Hama Aleppo highway from Khan Sheikhun to Maardabs, which is close to the recently liberated SAA Serakib. The work involved specialists from the Syrian transport department and the military. They cut off the shafts with bulldozers and removed the barriers established by the militants of the pro-Turkish formations at a time when the latter still controlled this region.

A little earlier, information appeared about the entry into the territory of Idlib province of the next Turkish military convoys of 90 cars. The Turkish column passed the Kafr-Lyasin checkpoint. However, then an unidentified explosive device exploded on the route of vehicles.

After the explosions in the area of ​​the village of Mukhambal, unknown militants attacked the Turkish military. To repulse the attack, additional forces of Turkish troops and pro-Turkish formations were deployed in the area, and unmanned aerial vehicles of the Turkish armed forces appeared in the sky above the attack area.

They suspect that the attack on the Turkish column is not the government forces of Syria or the Shiites, but the militants of Khurras Ad-Din, the Syrian branch of Al-Qaeda banned in Russia.

Interesting news came from the province of Deir ez-Zor. In the southeast of the province, unknown planes inflicted aviation attacks on the positions of pro-Iranian Shiite armed groups. The area of ​​Abu Kemal was attacked by air.

It is clear that the air forces of countries participating in the Western coalition led by the United States are suspected of carrying out the attack. After all, it was precisely American aviation that bombed the area on March 12 of this year. Then, as a result of the air raid, 26 Shiite fighters were killed.

In the province of Aleppo, in the vicinity of the settlements of Akiba, Kafr-Antun, Deir Jamal and Soganaka, pro-Turkish militants opened fire on the positions of Kurdish forces. The militants are supported by the regular armed forces of Turkey.

Thus, during the day of March 20, the situation in Syria remains quite usual for this long-suffering country: skirmishes, attacks on convoys, air strikes. Tension is felt not only in Idlib, but also in other Syrian provinces. As you can see, the Air Force of the pro-American coalition, which continues to attack the Shiite militia from the air, does not calm down at all.

The only really good news is the clearing of the M4 and M5 roads in Idlib. This indicates that Turkey nevertheless decided not to impede, at least externally, the implementation of the agreements in Moscow.

We are in Yandex Zen
Allegedly flight of militants from Khan Sheikhun and allegedly interception of Turkish aircraft by Russian Su-35
Syrian army launched the assault on Khan Sheikhun
25 comments
Information
Dear reader, to leave comments on the publication, you must to register.