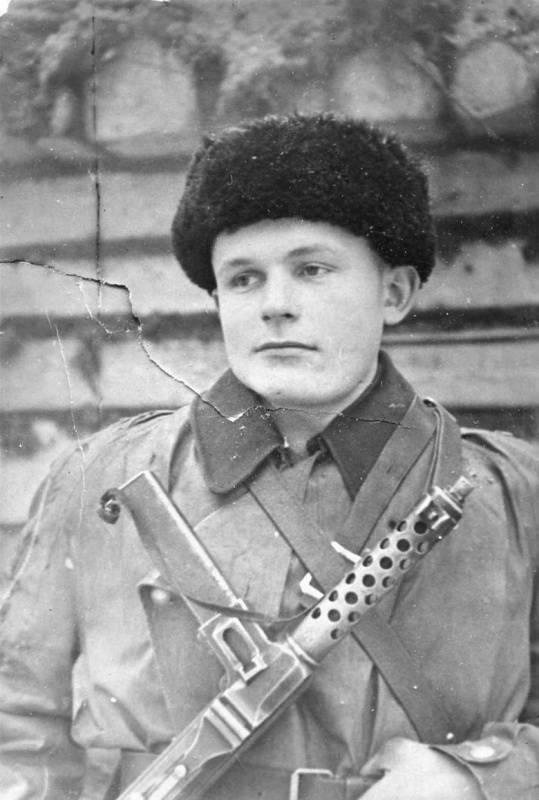 On the Internet, there is often a photograph of a young partisan in an SS coat and a rare Steyr-Solothurn assault rifle on his belt, buying up a signature under a photo: S.S. Jankovic. What did this guy do when he was 17?


A book is stored in the National Library of Belarus, which describes the exploits of Stepan Yankovich under the heading “Fearless Demoman”.

Stepan Stepanovich Yankovich during the Great Patriotic War (from May 1942) fought in the partisan detachment named after V.P. Chkalov brigade named after Y.M. Sverdlov. For military merits awarded many government awards.

Under the combat characteristic of Stepan Stepanovich Yankovich is the date: July 25, 1944. The characteristic is signed by the commander of the brigade named after Sverdlov I.P. Marinyako, commissioner of the brigade G.A. Dudko, commander of the unit named after V.P. Chkalova P.L. Gubarev. Behind her mean and concise words is the image of the people's avenger, who has accounted for more than 40 military operations. Among them are the destruction of 12 echelons, participation in the routs of the Peskovsky and Sporovsky garrisons, in numerous battles with punishers.

In Old Sands, the Germans appeared on the fourth day of the war. The enemy noted his arrival by the mass shooting of activists of the Soviet regime. The brutal occupation regime was, according to the Nazis, to break the will of the Soviet people. But just two weeks after the invaders arrived, the 17-year-old Stepan Yankovich received the first combat mission from servicemen P.I. Gubareva and V.M. Monakhov (foremen of the 459th rifle regiment of the 42nd rifle div.), Who lodged before the war with a neighbor Yankovichi: to collect cartridges and grenades, "which are now needed as bread." 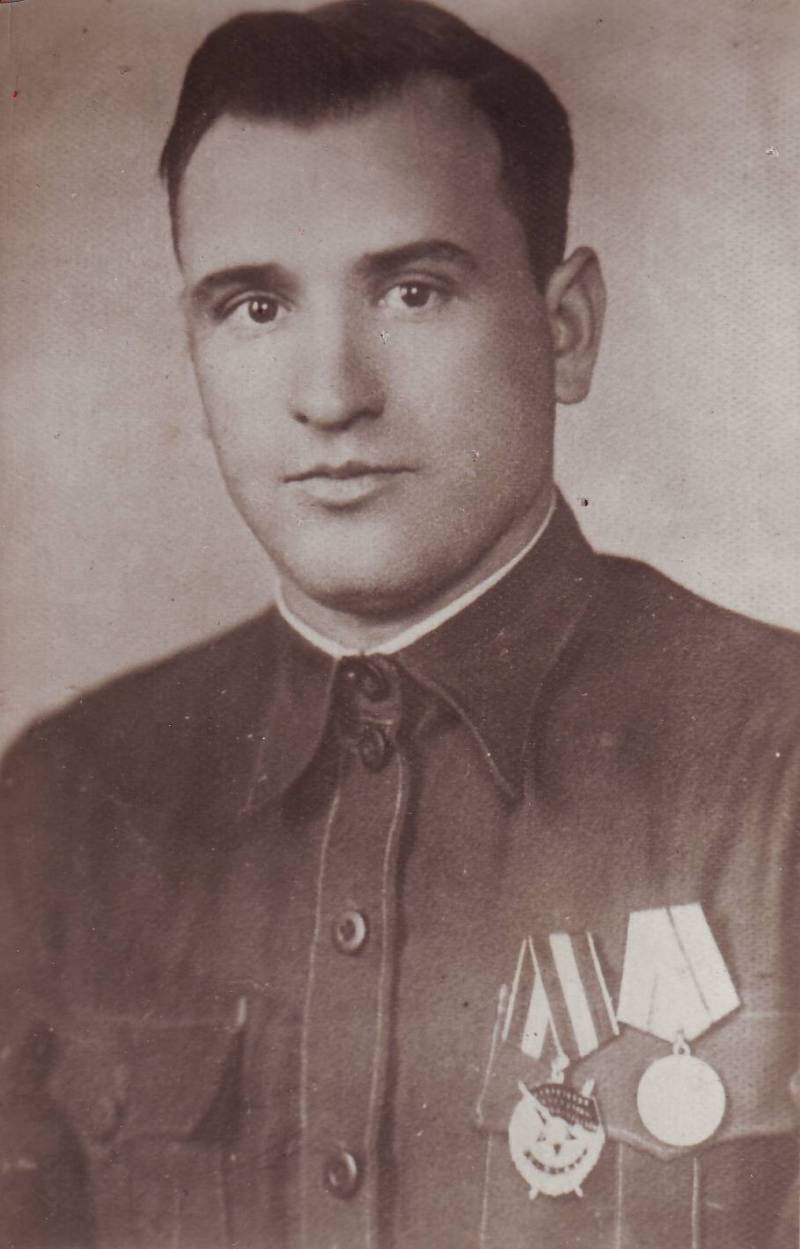 V. M Monakhov
Stepan willingly took up this assignment. Together with peers S. Mshar, P. Yankovich, V. Volk, he was looking in the forests weapon, took out cartridges, grenades and gun grease, transferred bread, lard, and shag to the forest. They tried to do everything secretly, but soon noticed that they were being monitored by the police. This guarded the guys. And on one of the May nights of 1942, the young patriots quietly one by one left the village and disappeared into the forest. And the next day with the partisans of the detachment to them. V.P. Chkalov they took part in the attack on the Peskovsky police station. 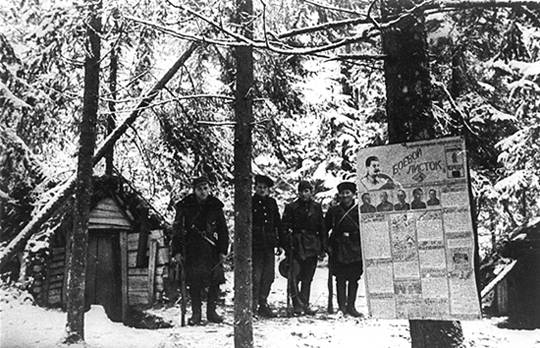 Partisans detachment them. Chkalov brigade them. Sverdlov
Under cover of darkness, the partisans entered the village, killed police officers, took away their weapons and, having released the arrested, set fire to the building in which the cells of pre-trial detention were equipped.

This was the first baptism of fire of Stepan and his peers. Success inspired the people's avengers, and they decided to consolidate it - to commit sabotage at the crossing near the Bronnaya Gora station, having dismantled the rails.

The operation was a success - at high speed the echelon with the enemy’s manpower flew downhill. The diversion was seriously alarmed by the German authorities. Rail security in the Bronnaya Gora area has been strengthened. But soon near the Bronnaya Gora a group of partisans led by Stepan Yankovich derailed the freight train, which was transporting food to the front. The Germans took a series of emergency measures. For each kilometer of the railway track, they fielded 7-8 soldiers, forcing the population of the surrounding villages to cut down the forest along the canvas. But these measures did not help either - as before, Stepan Yankovich, together with a group of demolition officers, regularly performed tasks of the detachment command. When the Germans mined the slopes, the Yankovich sabotage group began to operate on the Drogichin-Kovel railway.

To disrupt the movement of troops and cargo, partisans ambushed on highways, blew up bridges, and damaged communications.

On the Moscow highway between the villages of Zarechye and Smolyarka there was a twenty-eight meter bridge. Jankovic was instructed to destroy him. Stepan found that every night 5-7 Nazis, patrolling a section of the highway, pass through the bridge every hour exactly. Having decided to play German punctuality, Stepan along with Andrey Prokurator from Sporov brought a cart of straw to the bridge, scattered it on the flooring and doused it with kerosene. Stepan laid the ignitor with a Bickford cord tied to it. He quickly stepped over to the side of the road and set it on fire. After 10-15 minutes, the bridge burned like a torch. Random shooting began, but the partisans were already at a safe distance.

The Nazis attached great importance to the bridge over the Zhegulianka River on the Moscow highway. Sentinels stood here day and night, machine gun trunks stuck in different directions from the bunkers. It was impossible to approach the place. However, ingenuity also helped out here, Jankovic decided to use the old horse. Harnessed her at night, put a 50-pound artillery shell in the wagon. A fuse was attached to the shell with a tied telephone wire 150 meters long. In the dead of night, the wagon was sent to the bridge, and the demoman remained in the shelter. The horse walked slowly forward. Stepan unwound the wire and listened.

- Wait! Who goes! Shouted the German.

“What if the horse stops, then my idea breaks down, all the work disappears,” thought Stepan with excitement.

But the horse slowly trudged forward. One could hear the hoofs clattering muffled across the bridge. “Well done, old, did a good job,” whispered Jankovic and jerked hard at the end of the wire. There was a deafening explosion. Immediately cracked machine guns and machine guns. What's the point!

Once reconnaissance reported that a hundred Germans should move from Birch to Sands. A group of partisans of about 40 fighters advanced towards uninvited guests. They approached the ambush site at dawn, disguised themselves, set up hidden posts and patrols. I did not have to wait long. From the secret they reported the approach of the Nazis. The detachment prepared for battle. As soon as the enemy appeared on the road and caught up with a wide swampy clearing, a command was heard. Partisan machine guns, assault rifles, rifles were in a friendly manner. Surprise increased the force of the blow. Enemies were at a loss and in a panic began to scatter. In this battle, 26 soldiers were killed, as many were wounded, three were taken prisoner. There were no casualties among the partisans. The defeat of the column made a stunning impression in the Berezovsky garrison. The corpses of enemy soldiers lay in a clearing for a long time - the invaders were afraid to return to this place.

In December 1943, Yankovich, along with his military friend Andrei Procurator, was tasked with taking important information from a liaison officer in the village of Sokolovo. Stepan changed into German uniform, Andrei - in the uniform of a policeman. Let's go on the cart. Having passed a little, they noticed that a wagon was moving towards them.

- The Germans are in the sleigh! Three. What do we do?

The wagons got closer. Two officers and a soldier sat in a sleigh. Stepan raised his hand and in broken German asked:

“Who are you and where are you going?” The commandant of the Peskovsky police station is talking to you.

- It is very dangerous to move along this road. According to our data, partisans mined it in several places. We'll have to go around, ”Stepan finished.

While talking, from Sokolov, about half a kilometer from them, a string of carts with the Germans appeared. The situation is very complicated. Stepan frantically sought a way out of this situation.

“That's what, panov,” he told the officers, pointing to a moving train, “let's call in to my commandant’s office, I’ll take my people and they will be good guides to you.”

The officers consulted and agreed to be guests of the "commandant’s panel."

- I think, panov, everyone should not go. Someone should stay here and warn our people about the danger.

“I ask the gentlemen in my sleigh,” invited Stepan.

The officers relocated, and Jankovic launched the horse in a big trot.

Ahead appeared the beautiful house of Ignat Trutko. Stepan abruptly stopped the horse.

- Here is the commandant’s office. Get off, get warm, ”he suggested to the Germans.

Stepan, like a real owner, walked 5-7 steps ahead of his guests, quickly pulled out a gun in the canopy.

The Germans were taken aback and immediately obeyed the order. Andrew quickly disarmed them. Literally right in front of the enemy’s nose, the daredevils slipped into Voitešin, and from there through the Black Lake to the village of Chryso. The officers were delivered to the brigade headquarters.

Soon after, a resident of the village of Yartsevichi Tsibulsky came to the detachment and said that two unknown persons had wandered into his farm and were interested in the partisans. A group of partisans led by Yankovitch immediately went to the farm. There they saw two men - one was about forty-five, the other no more than thirty.

“We want to fight the enemy.” Take us to the squad, ”they declared with one voice.

The partisans arrived in the detachment late at night and, under the reliable guard of the sentries, went to rest. Jankovic purposely settled next to the guests and pretended to be asleep. It took about an hour and a half. And suddenly Stepan heard a whisper. Spoken in German:

- Clearly, we didn’t get there. And, perhaps, we’re unlikely to get out of here.

- By all means it is necessary to flee at the first opportunity.

After waiting for the morning, the partisans thoroughly searched the newcomers, ripped apart clothes, shoes and discovered suspicious documents. During interrogation at the headquarters, it turned out that these were spies who were given the task of scouting the place of deployment of the partisans and of killing the commanders.

It was February 1944. On one of these days, the detachment spread heavy news: Stepan Yankovich was seriously wounded by a torn mine during the next mining, both hands and eyes were damaged. Partisan doctors did everything that could be done in the field. The first plane arrived from the mainland, the fearless demoman was sent for treatment. Even the doctors themselves doubted that the human body could cope with such a serious wound. But Jankovic survived. Soon after the area was liberated from Nazi invaders, the former partisans returned to their native Sands. But the meeting with the most expensive people did not take place - the Nazis vented their anger on the parents of a brave partisan: they shot their mother, brother and sister, their father was taken to Germany.

Soon Stepan started a family, became a permanent resident of the village of Niva, in 1954 joined the Communist Party.

Pyotr Mamertovich Kowalski described these and a number of other events that occurred in the partisan detachment named after Chkalov brigade them. Ya.M. Sverdlova in her book “In the Brest Forests. Notes of the partisan. " 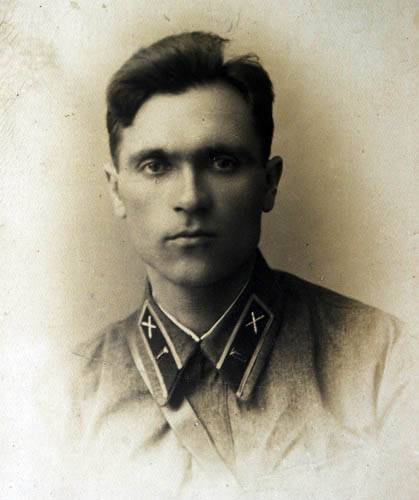 Kowalski P.M. 1929
The article is based on the book by Ivan Shamyakin “Memory. Historical and documentary chronicle of the Berezovsky district of the Brest region ”(1986).

We are in Yandex Zen
Thank you for being born!
To remember. My native women in the war
17 comments
Information
Dear reader, to leave comments on the publication, you must to register.