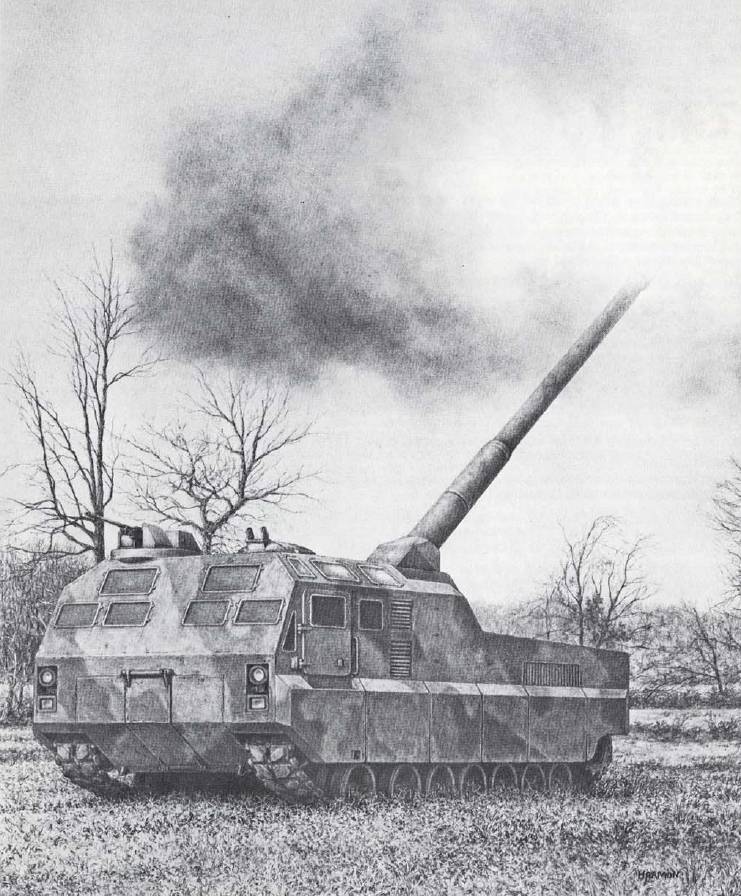 In the mid-eighties, the United States studied the question of creating a promising 155-mm self-propelled howitzer to replace the existing M109 Paladin, which ultimately led to the launch of the AFAS program and the emergence of an experimental self-propelled guns XM2001 Crusader. During this period, a self-propelled artillery complex project was proposed and worked out on the basis of the main combat chassis tank M1 Abrams.

M1 as a platform

The concept was developed by a team of specialists led by Major General Robert J. Sunnell. They offered to make a whole family of vehicles on the M1 chassis called AFV (Armored Family Of Vehicles - “Family of armored vehicles”). This family, along with other machines, included a self-propelled gun mount and a transport-loading machine for it.

The concept remained relevant for a long time and even lived up to the start of the AFAS program (Advanced Field Artillery System - “Advanced Field Artillery System”). At this stage, the self-propelled guns received the designation AFAS / M1. TZM for her was called - FARV / M1 (Future Armored Resupply Vehicle - "Promising armored loading vehicle").

As the basis for self-propelled guns and TZM, a redesigned MBT M1 chassis was proposed. The volume and nature of the improvements depended on the type of equipment under construction, since self-propelled guns and TZM were noticeably different from each other. At the same time, some unification of the new units was provided. Ready tank chassis simplified the production and operation of equipment, but the processing of armor excluded the work in the same order with MBT.

General view of the proposed self-propelled gun
In the AFAS / M1 project, the turret and the most powerful elements of the frontal armor were removed from the chassis. On TZM FARV / M1 also removed the roof of the body. In the nose of such a platform there was a unified crew cabin. In the lower frontal part, under the cabin, a hatch for the transfer of ammunition was provided. Behind the cabin was a superstructure of the desired shape and a tower. The engine-transmission compartment was maintained in the stern.

Self-propelled guns and TZM retained the standard Honeywell AGT1500 engine rated at 1500 hp and transmission. The hydraulic and electrical systems have changed. The undercarriage was not processed, but the possibility of using a hydropneumatic suspension was considered.

AFAS / M1 self-propelled howitzer could have an unusual design and significantly differ from most self-propelled guns. The project involved the use of a non-standard layout, wide automation of processes and a developed defense complex.

In the front of the AFAS / M1 hull there was a cabin with the workplaces of four crew members - the driver, commander, gunner and operator of the artillery system. The cockpit was given developed glazing with a good forward view. There were doors on the sides, a hatch in the roof. The commander had a turret with a machine gun. The habitable compartment was to be equipped with a collective system of protection against weapons mass destruction.

The cabin was part of a horseshoe-shaped superstructure. The rear parts of this superstructure were on the fenders. Over the regular shoulder strap of the case there was free space. The superstructure, including the cockpit, had bulletproof booking. 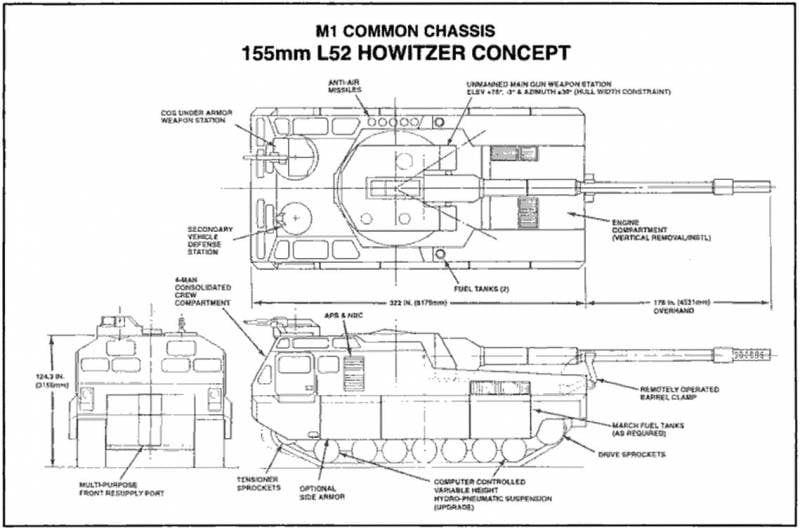 An uninhabited module with the main armament was placed in place of the tank tower. In the transport and combat position, the barrel of the howitzer was heading back in the direction of travel. Horizontal aiming was carried out within the sector limited by the superstructure.

AFAS / M1 self-propelled guns proposed to equip a 155-mm German-made JBMOU gun. The gun under the separate-shotgun loading was fixed on the installation with automatic guidance. A barrel of 52 caliber with a slotted muzzle brake was used. Due to its high power, the howitzer needed advanced recoil devices.

In the tower and in the housing next to the tower were placed the mechanisms of the automatic loader. Nearby, under the cab and in the center of the hull were mechanized piling. Ammunition could include up to 60 rounds with shells for various purposes and modular variable charges MACS. All operations with ammunition, from receiving the car to being sent to the chamber, were to be carried out automatically by crew commands.

It was planned to use a special conveyor for reloading ammunition with TZM. He was on a loading machine and could connect to a self-propelled gun through a hatch in the lower frontal part. After this, the TZM could transfer shells and charges to the combat vehicle. Self-propelled guns automatically laid them on the cells stacking. 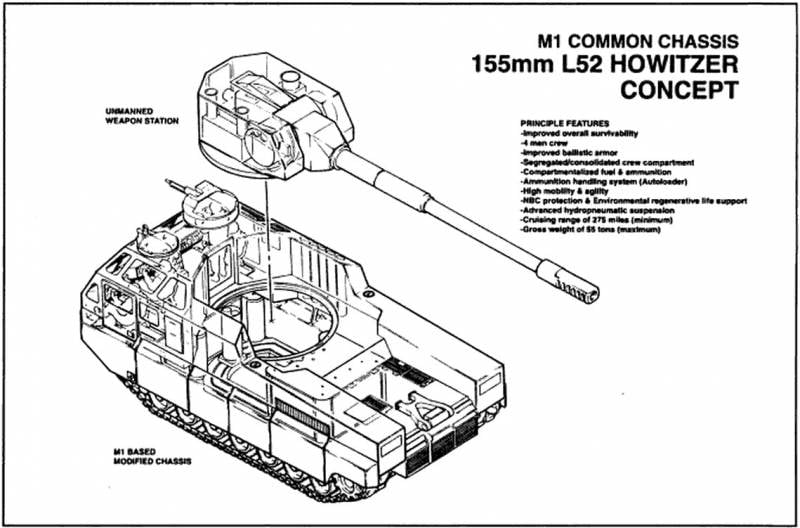 Chassis and combat module
According to the calculations of engineers, the automatic loader allowed to make the first 3 shots in 9,2 seconds. With long-term shooting, the pace was set at 9 rds / min. The shooting was under way in a “barrage of fire” mode. A series of 4-8 shots with projectiles being pulled out onto different trajectories took only 4 seconds.

For self-defense, the AFAS / M1 could carry two different systems at once. On the command tower, the designers placed a machine gun of normal or large caliber. At the starboard side of the superstructure behind the cabin, it was planned to install five cells for the TPK with guided ground-to-air missiles. Thus, the crew could protect themselves and their vehicle from both infantry and aviation.

To work with self-propelled guns, we developed a unified TZM FARV / M1 on the same chassis with a similar cab. The design of other units and the composition of the equipment differed and corresponded to the role of the machine.

FAVR / M1 received a longer box-shaped superstructure with aft ledges. For its installation it was necessary to remove the roof of the building with a place for the tower. At the front of the superstructure was the cockpit; all other volumes were given for ammunition and their storage / transfer means. 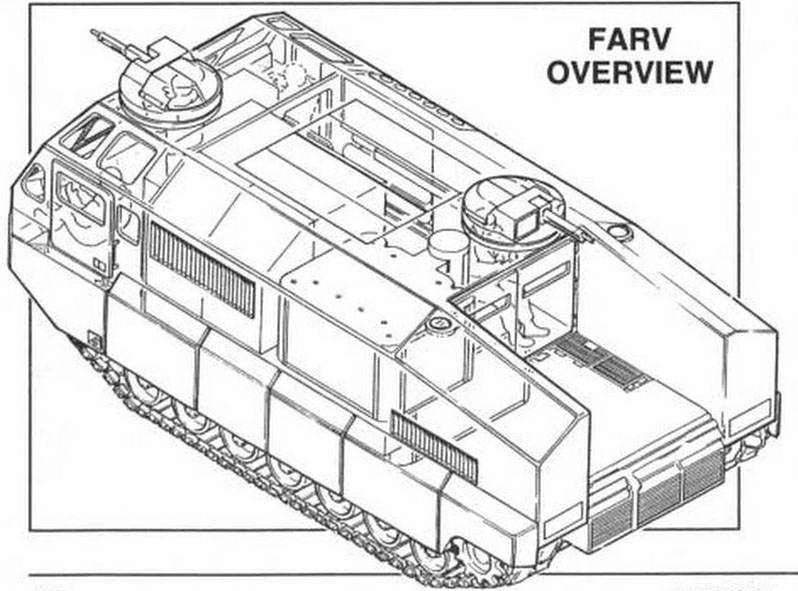 Transport and loading vehicle FARV / M1
The crew of the TZM also consisted of three people and was placed in the cockpit. The cabin kept doors, a hatch and a machine-gun turret. If necessary, one of the crew members could go to the stern of the superstructure, where the second machine-gun turret was located.

To load ammunition containers, the superstructure was equipped with a stern door and a sunroof. This made it possible to take containers from cars or using a crane. Inside the hull and superstructure were placed cells for 180 rounds of separate loading - three full ammunition for self-propelled guns.

To transfer ammunition to the combat vehicle, the VAS (Vehicle Aligment System) was intended. From the hatch in the bow of the TZM, a structure in the form of a truss with a conveyor was to be advanced. She entered the corresponding hatch of the self-propelled guns and gave her shells with charges.

Two main operating modes of the FAVR / M1 and its TZM were proposed. The first involved reloading the ammunition in the reserve position. Loading the entire ammunition took 20-30 minutes. The second mode offered the connection of two vehicles directly at the firing position. In this case, the AFAS / M1 self-propelled guns could fire continuously at targets, and the FAVR / M1 TZM would immediately deliver shells to it. This mode ensured a continuous rate of fire at the level of 10-12 rds / min. 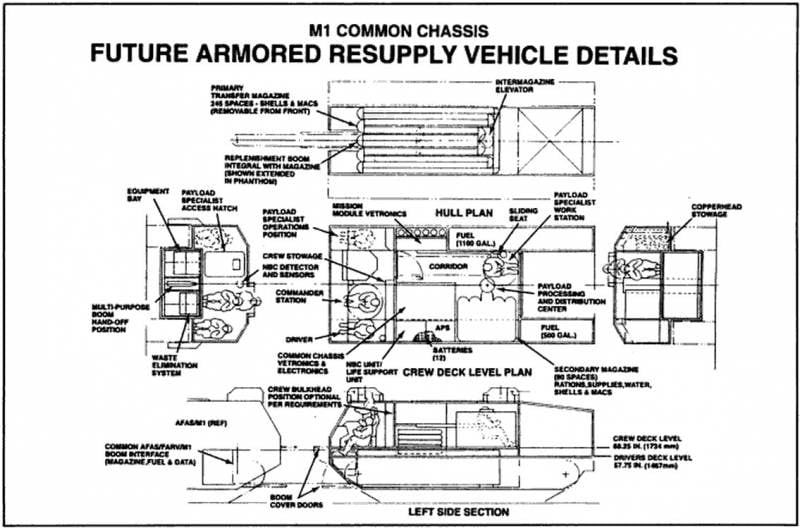 Unlike self-propelled guns, TZM could carry two machine guns for self-defense. There was also a unified onboard compartment for anti-aircraft missiles. The presence of the latter presented certain requirements for on-board electronics.

The AFAS / M1 complex concept had a number of positive features and advantages over other self-propelled guns. Machines of this kind could well find a place in the army. Both unification with serial MBT and expected combat qualities received high marks.
For AFAS / M1, the JBMOU gun was offered. With its help, self-propelled guns could attack targets at distances of up to 35-40 km, including using guided munitions. The maximum automation of the preparation for the shot gave a serious increase in performance, and also eliminated the human factor and a decrease in parameters as the work continued. In the future, such a gun showed high performance and found application on self-propelled guns PzH 2000.

The FAVR / M1 transport-loading machine, saturated with automation, was believed to be able to carry out its tasks as simply and efficiently as possible. In addition, the presence of two modes of operation was a plus.

According to estimates of the eighties, the design of self-propelled guns and TZM could take several years. Adoption could take place in the mid-nineties. The operation of such equipment was supposed to last at least until the mid-twenties of the XXI century. By this time, the appearance of fundamentally new samples was expected .. 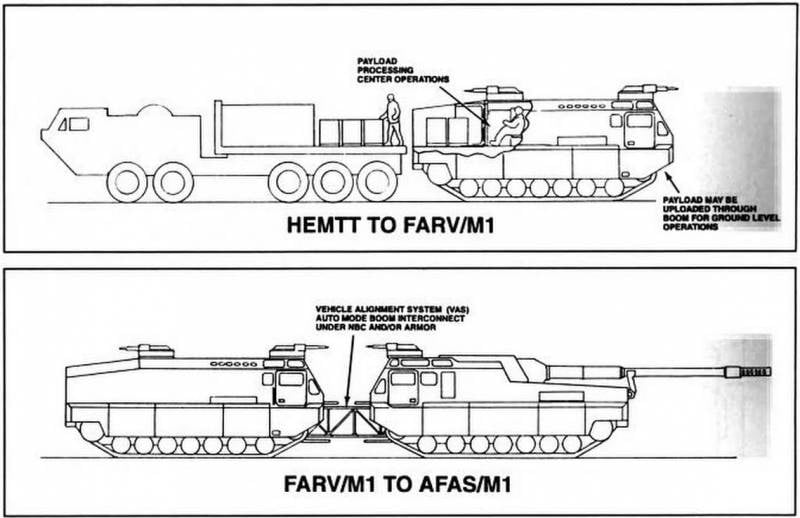 The use of TZM. Above is the procedure for receiving ammunition from a vehicle; below - work with self-propelled guns
According to some estimates, the AFAS / M1 - FAVR / M1 complex had significant advantages over others in its class. In particular, such self-propelled guns and TZMs could favorably differ from the XM2001 Crusader and XM2002 ARV. The advantages over them were associated with the use of a ready-made chassis and fewer overly new and bold solutions.

However, the AFV or AFAS / M1 project remained at the concept stage. The army examined the available offers and chose the best of them. The creation of the new self-propelled guns was entrusted to the companies United Defense and General Dynamics - they soon created the product XM2001. This sample reached the test, but did not advance further. The Crusader turned out to be too complicated and expensive, and in 2008 it was abandoned.

It is difficult to say how the development of American self-propelled artillery could go if the Pentagon became interested in the concept project of R.J. Sunnella. The use of ready-made chassis and weapons to a certain extent simplified the project, but the engineers had to develop many other systems. At this stage, one would expect serious difficulties or problems.

Thus, it is quite possible that an attempt to create an AFAS / M - FAVR / M1 complex or other projects of the AFV family would end in the same way as work on the XM2001 Crusader. but история He does not know the subjunctive mood, and currently the US Army has to once again modernize the existing M109 self-propelled guns, and replacing them remains a matter of the distant future.

Ctrl Enter
Noticed a mistake Highlight text and press. Ctrl + Enter
We are
SAU XM2001 Crusader. Bad past and look to the future155-mm self-propelled howitzer XM1203 NLOS-C (Part 1)
118 comments
Information
Dear reader, to leave comments on the publication, you must to register.