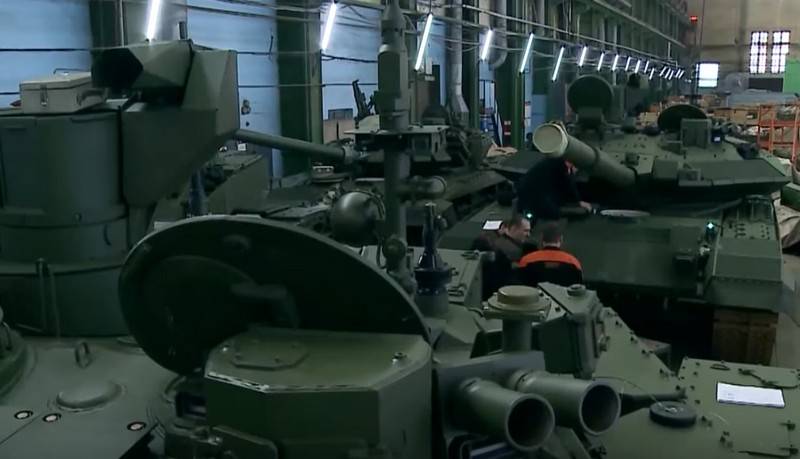 Newest Production Party tanks T-90M "Breakthrough" manufactured by Uralvagonzavod. These tanks are prepared for shipment to Moscow to participate in the Victory Parade on May 9 on Red Square. Video about the preparation of tanks provided the channel "Star".


As previously reported by the Ministry of Defense, the newest T-90M "Breakthrough" tanks will be shown for the first time at a parade dedicated to the 75th anniversary of victory in the Great Patriotic War. It also became known that the tests of the newest Russian tank T-90M "Breakthrough" were successfully completed, the timing and volume of serial deliveries of tanks to the troops will be determined by the Ministry of Defense. It is also known that funds for the purchase of T-90M tanks have already been allocated, the delivery of serial vehicles is expected in 2020.

According to available information, in the period 2017-2018, the Ministry of Defense concluded two contracts for the supply of 60 T-90M tanks. Under the first contract, the enterprise was supposed to supply 10 tanks of new construction, and another 20 will be converted in the course of major repairs and modernization from T-90 tanks. Under the second contract, 30 tanks should be delivered, upgraded to T-90M from T-90.

Ctrl Enter
Noticed a mistake Highlight text and press. Ctrl + Enter
We are
Reports from the militia of New Russia for 27-28 September 2014 of the yearYuri Drozdov: Russia prepared the role of the sacrificial calf
51 comment
Information
Dear reader, to leave comments on the publication, you must to register.