To the 35th anniversary of Gorbachev's perestroika: a clear plan or complete improvisation of the USSR authorities 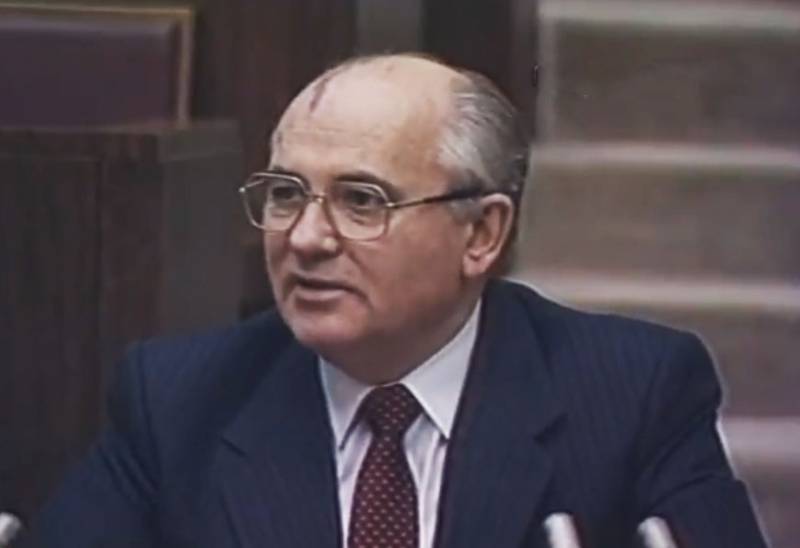 35 years have passed since the energetic young leader Mikhail Sergeyevich Gorbachev came to power in the country and the party, immediately declaring himself to be a reformer of the socio-political and economic system in the USSR. The same Gorbachev, who first set the course for "acceleration" and then for "perestroika".


A month and a half after being elected General Secretary of the CPSU Central Committee, Gorbachev held a plenary session of the Central Committee, at which he proclaimed a course to accelerate the economic and social development of the USSR. The previous period (not particularly outlining its time frame) at the plenum was described as “stagnant”.

Historians argue whether Gorbachev had a plan to modernize the country and its political system. Some claim to be. As an argument, they recall a certain plan of economic reforms, as if being developed in 1983-1984 on behalf of the Secretary General of the CPSU Central Committee, Yuri Andropov.

The argument is extremely doubtful. Due to the fact that it contradicts the real policy of Andropov, imprisoned for the Bolshevik coercion of the people to labor discipline. In addition, party practice at that time included a discussion of plans and programs being developed in primary organizations and at plenary sessions of higher committees. None of this was close.

Therefore, we agree with the position of those who call Gorbachev's reforms improvisation. What was seen in them quite definitely was the policy of changing the party elite. It was implemented, as they say, in all the blades. Within a year and a half, the composition of the highest political leadership (Politburo of the Central Committee of the CPSU) was renewed by 70%, and the heads of republican and regional party organizations by 60%. The government of the country has split even stronger. Of the 115 members of the Council of Ministers of the USSR who were appointed before 1985, Gorbachev left only 10.

He began his reforms with an anti-alcohol company and quickly destroyed the country's budget. The fact is that the sale of alcohol accounted for a quarter of the revenue of trade entering the treasury. Approximately the same share was accounted for by alcohol in the volume of the cost of production of the food industry.

In total, the country's budget has lost more than 40 billion rubles (of the total fees of 390 billion). The lost income could not be replaced. But ordinary Soviet people responded to a reduction in the sale of alcohol by an increase of 18% in sugar consumption (by 1,4 million tons).

It is estimated that 140-150 million decalitres of moonshine were made from it. But it is reliably known: from 1985 to 1987, 577 thousand citizens were detained for moonshining! At the same time, sales of alcohol-containing glue BF increased to 1000 tons (32%).

Be that as it may, these throwings by Gorbachev and his team will be called the first stage of Perestroika. The second will begin in January 1987 with a plenum of the CPSU Central Committee, which proclaimed radical changes in economic and political relations in the country and its foreign policy.

In the economy, individual labor activity was stimulated, cooperatives and joint ventures with foreign companies were created. In domestic politics, they announced the democratization of society, the reform of political institutions and publicity in the media. In international relations, the New Thinking doctrine has become dominant, proclaiming the rejection of the class approach in diplomacy and the improvement of relations with the West.

Under these new revolutionary directions of state policy, in a good way, there should be a base worked out in specialized research institutes of that time. Among them, for example, was a whole institute of socio-economic research.

However, the party leadership took as its basis not scientific knowledge, but its own point of view. As a result, it shook the whole country. In the economy, a conflict arose between regulated wages at state enterprises and free - in private business. This caused widespread discontent among people.

In public relations. The lifting of a number of justifiable bans paved the way for the creation of nationalist and separatist organizations. From that time, for example, the Ukrainian party "RUH". Initially named as the “People’s Movement of Ukraine for Perestroika,” it quickly mimicked into a radical nationalist organization, from which later the leaders of all Ukrainian Maidans left the ranks.

In international politics. Improving relations with the West has led to the unilateral surrender of the country's geopolitical position. Now, some experts interpret these actions of the highest leadership of the USSR as a betrayal. Let us dwell on a milder assessment - “ill-conceived policy”.

In any case, this reflects the lack of a detailed action plan. It is this approach that characterizes the second (1987–1989) base stage of Perestroika. At this time, conditions were formed for the further degradation and destruction of the country and the party. It is no coincidence that historians attribute the third stage (1989–1991) to the period of destabilization of the social and political situation that directly led to the collapse of the Soviet Union.

People say: measure seven times - cut one. Improvisation in politics, which Mikhail Gorbachev allowed himself, brought many Soviet people suffering and misery, brought down a great country. We must always remember this bitter lesson.

Ctrl Enter
Noticed a mistake Highlight text and press. Ctrl + Enter
We are
The tragedy of the American army ("The Atlantic", USA)Situational analysis of the death of the MH17 flight (Malaysian Boeing 777), made on the basis of engineering analysis from 15.08.2014
112 comments
Information
Dear reader, to leave comments on the publication, you must to register.