In the US: Trump may postpone election due to coronavirus and remain president indefinitely 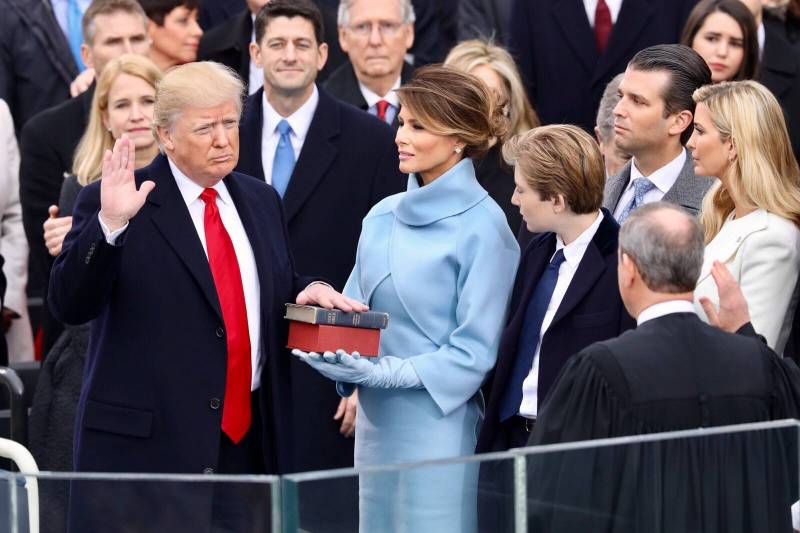 Along with the enormous damage that has already been done to the global economy, the COVID-19 pandemic has brought a hefty mess to the political life of many states. The United States was no exception in this matter. This year’s precious and inviolable presidential election is likely to interfere. But it will only be committed not by mythical "Russian hackers", but by a very real invasion of the coronavirus, which is spreading more and more rapidly throughout the country.


There are precedents for canceling due to the widespread illness of various elections and referenda. London Mayor Sadik Khan will remain at his post for another year - the re-election of the mayor of the British capital has been postponed. After March 15 in France, the first round of local elections, at which the turnout was extremely low, they decided to postpone the second stage of voting. So far - until June 21, and there it will be seen. The parliamentary elections in Serbia, referenda on various issues that were to be held from March to May in Italy, Switzerland, and Armenia were also postponed. Western media have already called the outbreak of the virus “a difficult test for democracy,” with good reason.

In the United States, this test fell at the very height of the election race, the main stage of which traditionally begins after the primaries - the primary party elections. Events are usually noisy and crowded, and here the Central Concert Hall categorically advised against holding any meetings with the number of participants exceeding 50. In the White House, they insistently advised more than 10 people not to gather. How to be here? As a quarantine measure, the primaries have already been rescheduled to Kentucky, Ohio, Louisiana, Maryland. In line, it is quite possible, and other states. This may automatically lead to the fact that by the time of the all-American presidential election scheduled for November 3, all necessary preliminary procedures will not be properly observed.

In a country where filing lawsuits for any reason has long turned into a “national hobby”, such clues may well create for someone a great opportunity to challenge the results of the vote. However, there are fears of a different kind. So, the senator from the Democratic Party Sherrod Brown has already expressed concern that the current head of the White House, using as an excuse the rescheduling or canceling primaries in certain regions, may try to postpone the elections themselves for an indefinite period. “In the era of Trump, this is possible,” the senator summed up. It is noted that this will allow Trump to remain president without an election for an indefinite period.

On the other hand, all these issues can be discussed exclusively within the framework of the best scenario for the development of the epidemic in the United States. One in which the vast majority of Americans will receive news about COVID-19 from the screens of their own TVs and smartphones, and not from an observing doctor or commandant of the quarantine camp ... In case the disease swallows the country and breaks it into enclaves enclosed from each other with a more or less favorable epidemiological situation, about no elections, it’s clear that we’ll no longer be talking. Yes, in order to postpone their date at least for a day, according to the current regulatory documents, a new federal law is needed, approved by Congress and signed by the president. And, again, to be appealed to the courts. Let's not forget that the centuries-old oaths of the new Congress and the beginning of the term of the next president (January 3 and 20, respectively) are recorded in the US Constitution.

Nevertheless, if we evaluate the prospects of how much the current head of the American state could, having slightly “moved” the foundations and traditions due to emergency circumstances, continued to remain “at the helm” even after de jure expiration of his own term of government, then it’s just Donald Trump, apparently, in such a situation, especially hesitate and will not be shy. As a matter of fact, he has already proclaimed himself "the president of wartime." True, at the moment we are talking about the extraordinary powers of the head of the White House solely in economic matters, and even then, Trump promised to use them only if it comes to the “worst case scenario”. However, the beginning is very promising ...

The thing is that the troubles that erupted - both the pandemic and the oil "collapse", which is now pushing for the American "shale", and the crisis and recession that will inevitably follow, the beginning of which the American bankers have already announced, actually negate all of Donald’s efforts Trump in gaining the popularity of voters just by improving their standard of living. In fact, his entire presidential term was crossed out by the insane events of recent months. Is this fair? You can argue for a long time. However, the fact that what is happening to Mr. President is utterly insulting is indisputable. Will he resist the temptation to “correct his fortune” by taking advantage of force majeure that spoils his political “karma”? See you soon.

Ctrl Enter
Noticed a mistake Highlight text and press. Ctrl + Enter
We are
The situation in the south-east of Ukraine. Chronicle of events 11 MayDecember 2010 years. Russian March. Senseless and merciless? Notes not a Russian person
41 comment
Information
Dear reader, to leave comments on the publication, you must to register.