July 26 2012
20
American troops are adopting the next modification of the Stryker armored vehicle - 120 mm high precision mortar APMI - Accelerated Precision Mortar Initiative. When installing new mortar systems 120 mm caliber American BBM "Stryker" gets the designation "Double-V Hull Mortar Carrier Vehicle" or abbreviated "MCVV". Interesting fact, weapon begins to be considered accurate in the United States Army if 50 percent of shots fall in the 10-meter circle with a target in the middle. As tests have shown, the new mortar not only fits into the framework of high-precision weapons, but also hits the set targets from the first shot.

Today, 120 mm mortars are already used in the US peacekeeping units in Afghanistan and continue to enter into the armaments of tactical units. Mortars can also be used as portable mortar systems. This is the eighth modification of the Stryker BBM, and although there is already a M1129 modification, known as a mortar conveyor, these are two different machines. 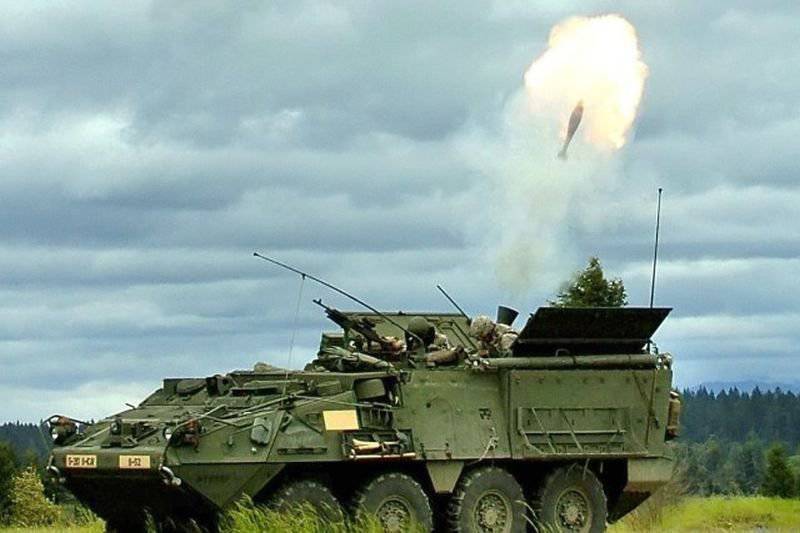 Armored fighting vehicles "Stryker"
BBM "Stryker" is a series of intermediate type armored vehicles, created on the basis of Piranha armored transporters for the ground forces of the United States bearing the same name. To create the car, two companies joined together - “DDGMC” and “General Dynamics Land Systems”, which create a new car based on “LAV III”. BMM gets the name of the 2-s distinguished American servicemen - in World War II and Vietnam awarded the medals of Honor (posthumously).

The first vehicles arrived at the Stryker units from 2002, which embodied the ideas of the land general Shineski. He believed that the concept of ground forces that existed at that time was already lagging behind the rapid changes in the use of ground units in military conflicts and tried to create fast and maneuverable units using more powerful equipment (BBM Stryker) and existing infantry units. Lightning delivery of such units was planned to be carried out through continuous cooperation with the Navy and Air Force. These new divisions became, in fact, advanced ground forces invading enemy territory. 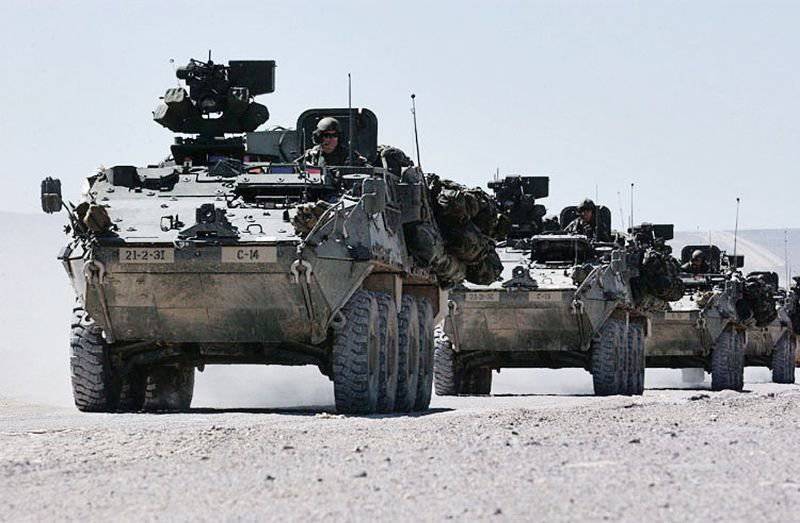 The new program of creating units “Stryker” using the BBM “Stryker” is adopted in the Ground Forces of America, but on the way of creating machines they decide to modernize, and they become heavier and slower than even the machines on the basis of which they were developed, and are not well adapted for the transfer by air. Mobile ground units with such machines were presented to the US Congress by the military as military forces that solve the full range of tasks. However, the Stryker BBM was in fact lightly armored vehicles vulnerable to large-caliber weapons and RPGs. The use of new machines in military conflicts has shown that there are many comments and unresolved problems on them that need to be worked and worked on. The car turned out to be quite bulky, high and overloaded, which eventually led to a rollover on poorly equipped roads.

According to the initial plans of the land military command, it was planned to create 6 brigades "Stryker", the main technique of which will be the various versions of the execution of the machines "Stryker". The estimated cost of 6 brigades is 15 billion, where about five billion are unforeseen expenses and price rises.

Iraqi experience cars "Stryker"
All the results of combat operations in Iraq were analyzed and evaluated, and even a separate special report was compiled on the Stryker BBM. The main conclusion drawn up by military experts from the report is that combat vehicles almost completely do not correspond to the tasks assigned to them, and their continued use in the troops is under great doubt. 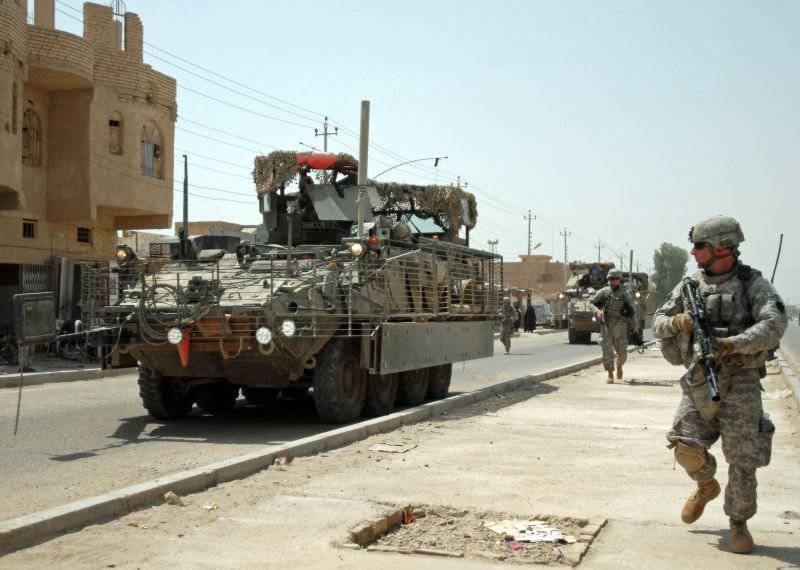 The main disadvantages are:
- unreliability in combat conditions;
- weak protection even against small arms;
- low firepower;
- some design flaws.
- a high probability of destroying a BBM with a single shot from a grenade launcher; 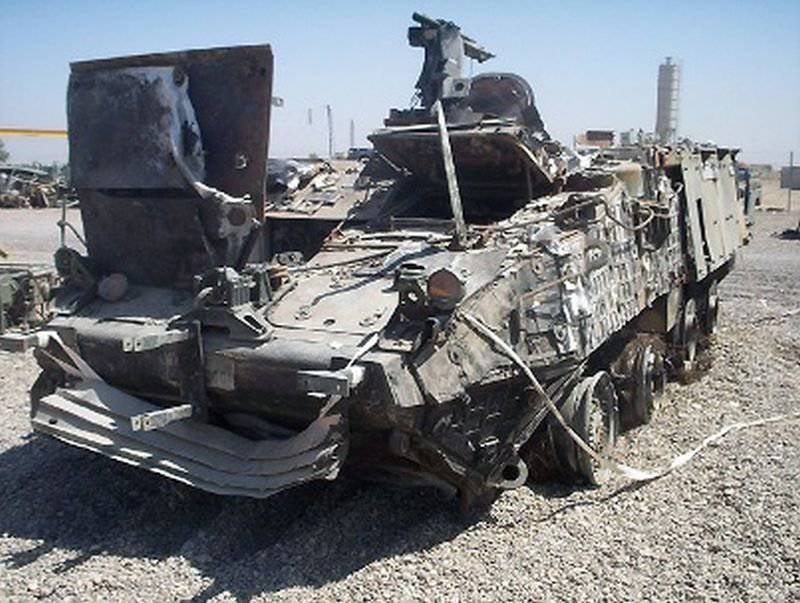 The main method of dealing with weak protection was the installation of anti-cumulative grids, which only overloaded the car and reduced mobile performance. Overloading led to a very fast tire replacement, and became a problem with heavy rainfall. After the rains, BBMs generally tried not to use, so the cars got stuck even on the roads and installed not very powerful engines in such conditions failed. Among the shortcomings of the design solutions, it is worth noting the inconvenient solution of seat belts, which even led to the death of several American servicemen. There were, of course, claims from the infantrymen and to the standard armament of the machines, however, against the background of the aforementioned deficiencies, they can be ignored.

The main loss of crews of vehicles - 17 military personnel, and this despite the fact that BMM began to be used in Iraq, after the active phase of military intervention. The main attacks on the vehicles were made by irregular Iraqi groups, the main armament of which was old grenade launchers and outdated types of mines. Back in Iraq, it became clear that the “Strikers” are rather unsafe, first of all, for the US military, and their use in solving various tasks was significantly reduced.

However, as is often the case, the US military does not reject this military equipment. The new modernized machines, which have received dynamic protection, come into service with the units of the ground forces of the United States. In addition, mounted machines are equipped with mounted dynamic protection systems, which are designed to minimize the main weakness of the armored vehicle - weak protection against large-caliber weapons and grenade launchers.

Device and design of BMM "Stryker"
The machine has retained the layout characteristic of the Piranha wheeled armored conveyors:
- Department of management - in the bow on the left;
- MTO - in the bow on the right;
- troop compartment - the central and aft part of the machine;
The crew of the BMP "Stryker" two people - the commander of the car and the driver-mechanic. In the troop compartment can accommodate 9-infantry in full gear. The wheels of the machine are connected to the centralized paging system. The entrance and exit of the infantrymen into the car is carried out through the stern ramp, which has a built-in door and two hatches in the rear part of the car’s hull on the roof. Formula wheels 8x8, with the ability to disable the drive 2-x bridges.

The driver-mechanic is provided with three M17 periscopes and a night vision device. The main equipment installed at the commander of the machine:
- digital data transmission system FBCB2;
- system display and refinement of tactical situation;
- navigation system "Raytheon" AN / TSQ-158;
- Periscope М45 - 7 units;
- display display from a video camera and thermal imaging information;

The MTO is equipped with a Caterpillar 3126e / C7 diesel engine, with HP 350 power characteristics. The transmission is automatic, transmission “MD3066P” 6-ti speed from the company “Allison”. Armored fighting vehicle is not a floating type. 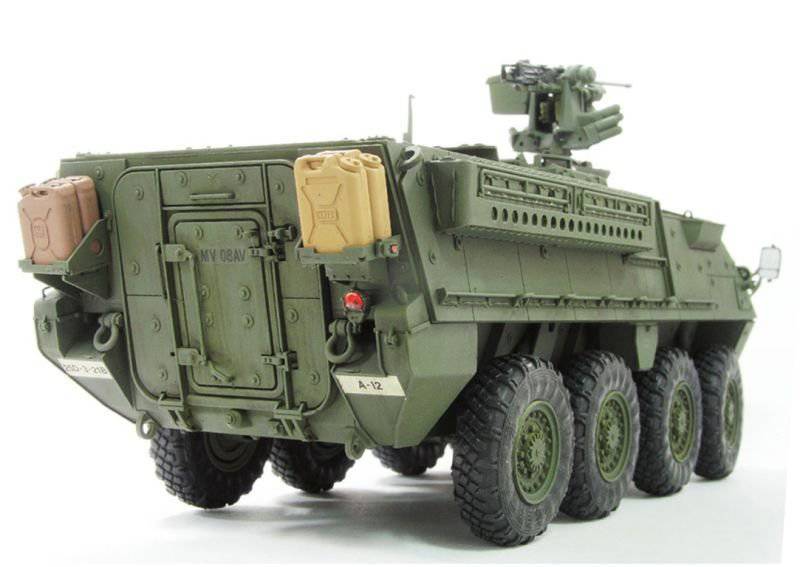 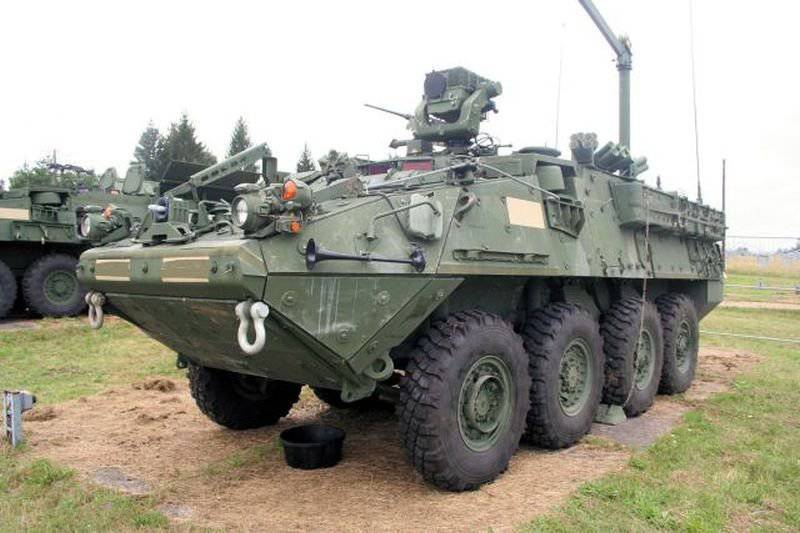 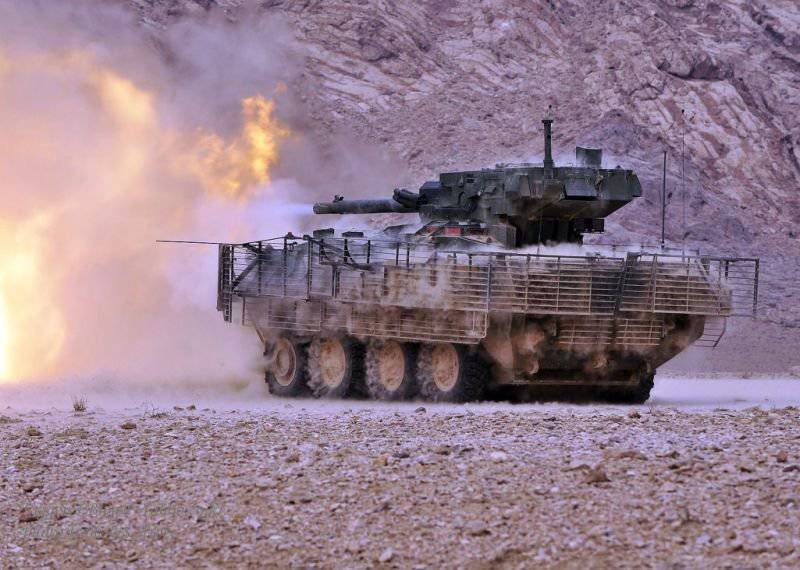 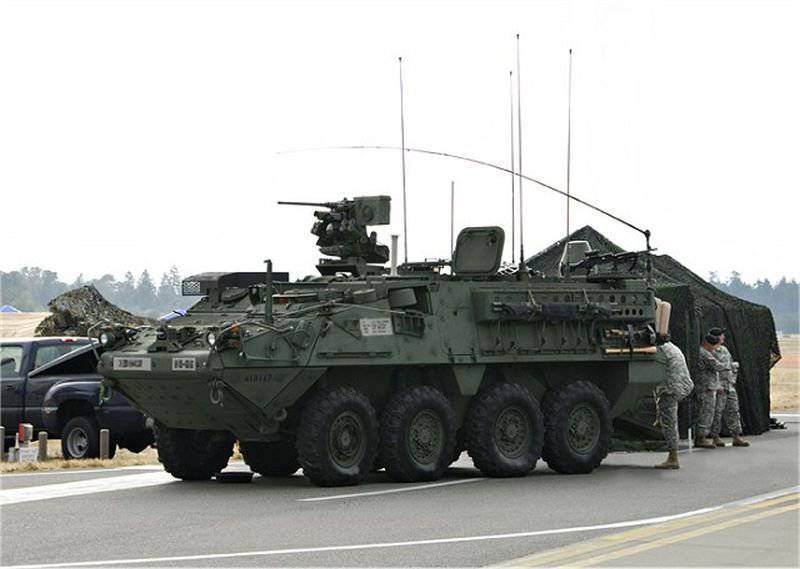 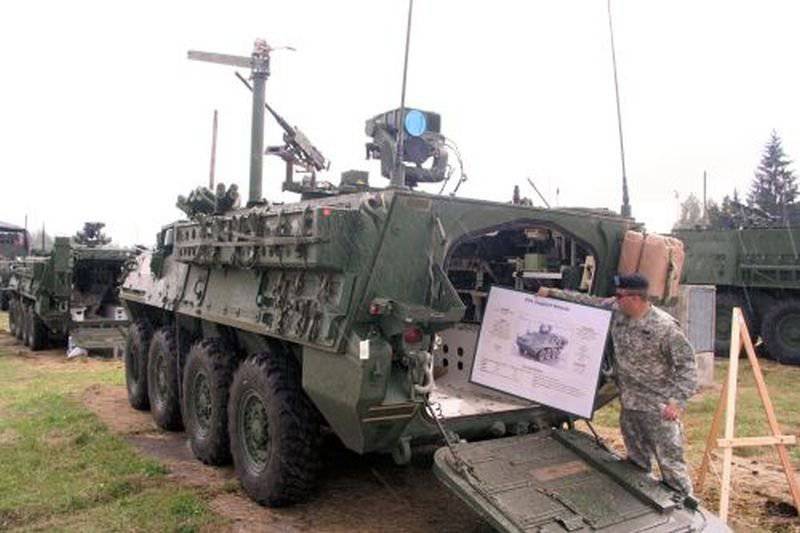 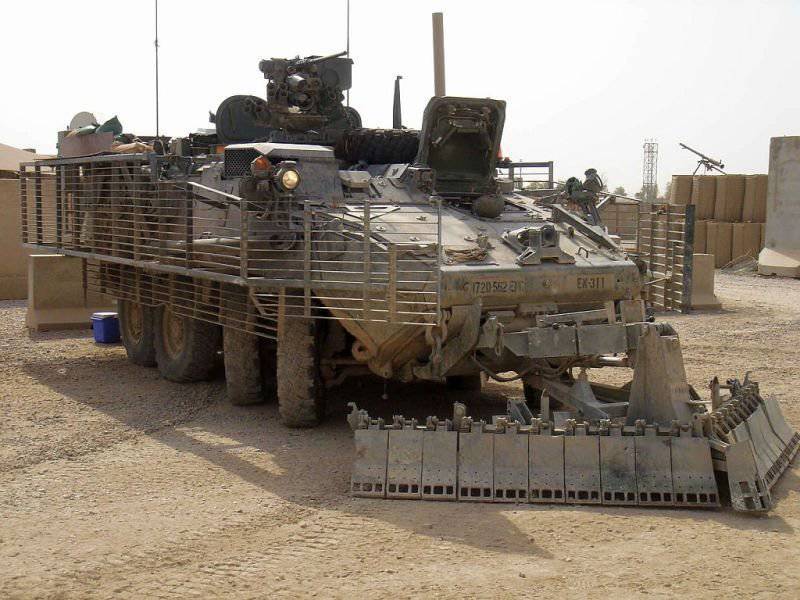 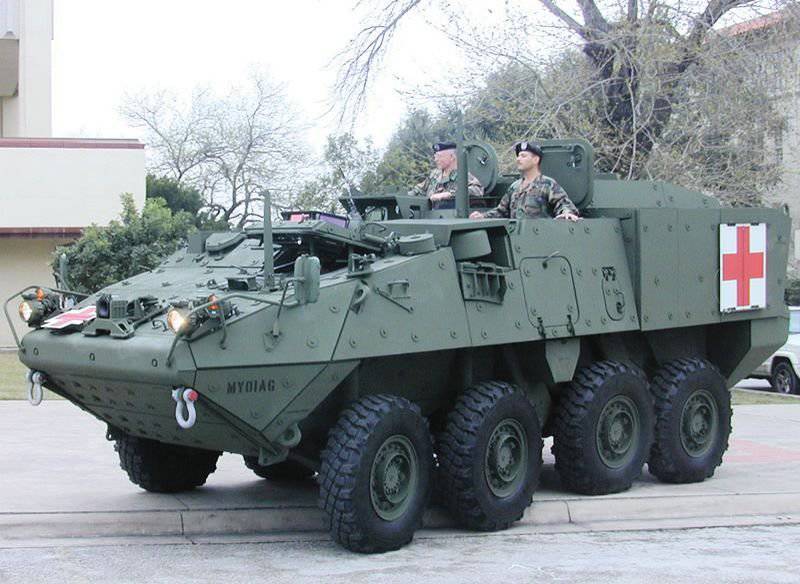 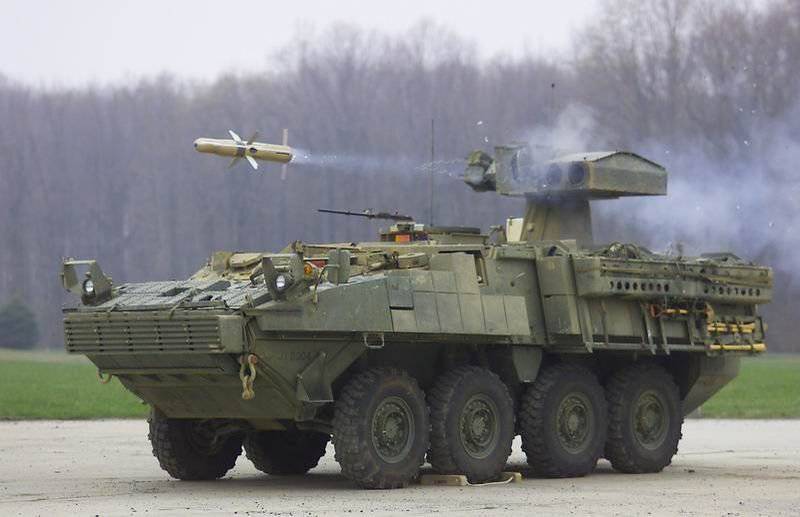 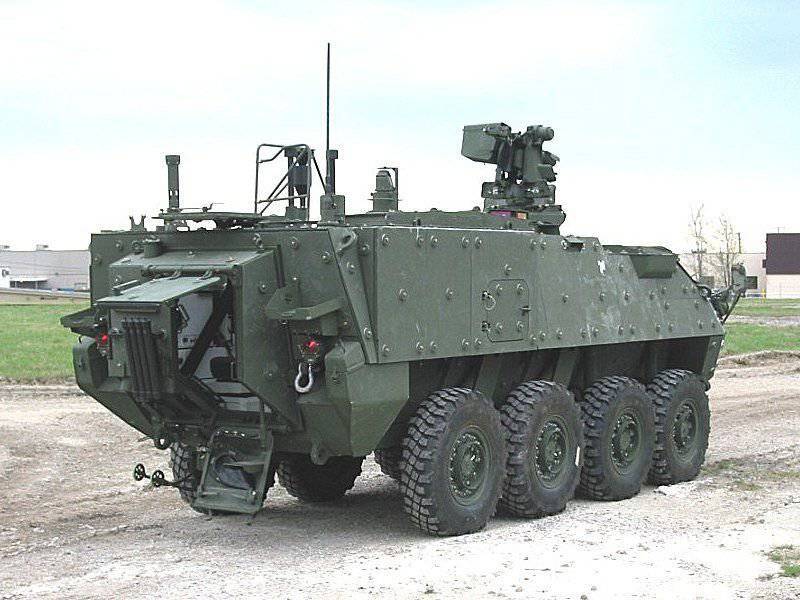