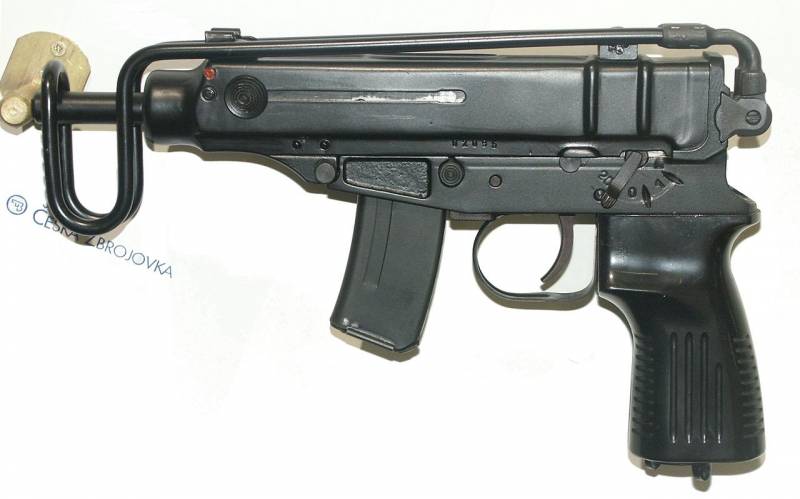 GDR industry produced small arms weapon all major classes, but self-developed submachine guns were not produced until a certain time. In the mid-sixties an attempt was made to create such weapons, which had limited success. The resulting WG-66 submachine gun showed acceptable characteristics, but could not win the competition and lost to the foreign model.

The decision to develop a new submachine gun was made by the GDR Ministry of Defense in 1966. At that time, the National People's Army (NNA) was armed with licensed copies of Soviet Kalashnikov assault rifles and Makarov pistols. The command considered that the NNA needed a new weapon that could occupy an intermediate niche between these products.

Earlier, the military managed to get acquainted with the Czechoslovak submachine gun Šcorpion vz. 61 and became interested in him. As a result, the terms of reference for their own sample were made taking into account the characteristics of foreign weapons. The new product was supposed to have similar dimensions and weight, and also show similar firing characteristics.

In June 1966, a competition was launched, which attracted several arms manufacturers. As expected, the Czechoslovak Scorpio participated in the competition. Also tested were the Polish PM-63 RAK. GDR at the competition was to represent the company VEB Geräte- und Werkzeugbau Wiesa (GWB) from the city of Visa (Saxony).

Until the beginning of 1967, GWB was engaged in preliminary research and the search for technical solutions. After that, the design of the finished submachine gun began. At this stage, the weapon received the WG-66 index - by the name of the developer and the year the work began. At first it was designated as a "rapid-fire pistol" (schnellfeuerpistole), and later transferred to the category of "small" machine guns - MPi or Klein-MPi.

Experienced submachine gun WG-66 of the first version chambered for 7,62x25 mm TT
R&D began with the search for a cartridge capable of providing all the required characteristics. Of the several ammunition in service with the NNA GDR, the Soviet 7,62x25 mm TT was chosen. Its energy and ballistics provided the desired combat qualities, and its small size made it possible to reduce the store and the weapon itself. Finally, the army had large stocks of such cartridges, although their production was stopped in 1959.

One of the objectives of the project was to reduce the cost and complexity of production. As a result, the design of the WG-66 was based on the simplest and most common ideas, although it could not do without some original suggestions. At the level of basic ideas, it was a submachine gun with automatic equipment based on a free shutter with several fire modes and a folding stock.

WG-66 was assembled on the basis of a receiver with a top cover and a removable trigger guard. A 7,62 mm rifled barrel was rigidly fixed in the box; outside, a slotted arrester was screwed onto it. To reduce the length of the weapon, a L-shaped bolt with a massive front part was used. Behind the shutter was supported by a return spring. Shooting was carried out with an open shutter. Technical rate of fire - 860 rds / min.

The trigger mechanism of the trigger type was placed in its own casing. Its design was based on the USM Kalashnikov assault rifle and had minor differences. In particular, the choice of the fire regime was carried out using the flag on the left side of the weapon, above the pistol grip.

Shops were placed in the receiving shaft in front of the trigger guard. For WG-66, they created two own stores for 10 and 35 rounds. The design of the store provided a protrusion for the slide delay. In the working position, the magazine was held by a rear latch. 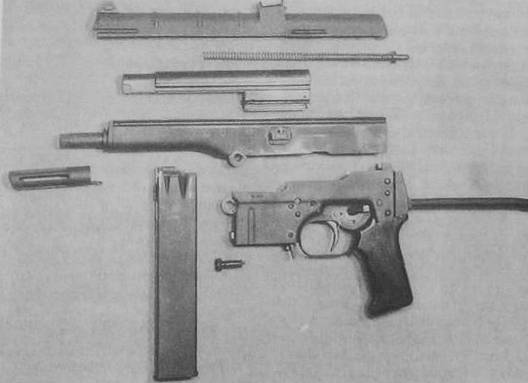 The product is disassembled. Visible design of the receiver, shutter and other details
On the front cut of the receiver cover was a front sight. In the central part of the lid there is an open sight in the form of a drum with slots. By turning the drum, a firing range of 50, 100, 150 or 200 m was set.

The submachine gun received a plastic pistol grip pad. A folding metal butt was attached to the rear of the USM casing. If necessary, it was folded by turning to the right and forward, after which the shoulder rest could be used as a front handle.

Experienced "quick-fire pistols" WG-66 were sent for testing in November 1967. The first firing ended with mixed results. Technical specifications were acceptable, although there were some difficulties. Much more problems arose with ergonomics. The controls were uncomfortable, the butt staggered and interfered with aimed shooting. The front of the receiver was heated from the barrel and could burn the arrow. Thus, the submachine gun needed to be finalized part of the units. 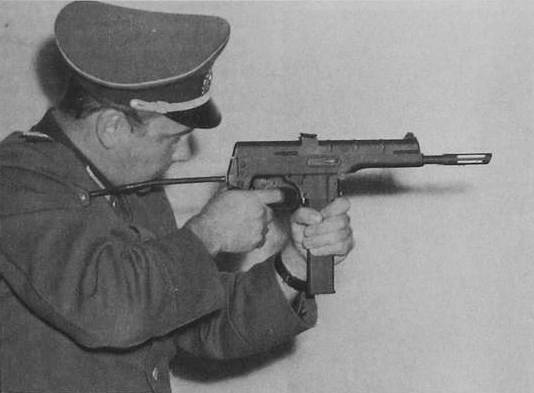 At that time, the Ministry of Defense determined rough plans for future purchases. NNA required about 50 thousand units of new weapons. It soon became clear that the real number of submachine guns would be greater - other law enforcement agencies became interested in the WG-66 project and the army competition as a whole. They needed about 3-5 thousand "small machines".

WG-66 at the competition

In November 1968, the modified and improved WG-66 was again sent to the landfill. Comparative tests of three submachine guns - one domestic and two overseas - began. Army experts fired at all modes from different ranges and for different targets, which made it possible to determine all the technical and operational characteristics of the weapon.

The findings of the testers were very curious. The East German Klein-MPi WG-66 was inferior in size and weight to its competitors - the Czechoslovak "Scorpion" with an unfolded butt had a length of only 522 mm and even weighed less than 1,5 kg with a store. The Polish PM-63 was slightly larger and heavier than the Scorpion, but it still turned out to be smaller and lighter than the WG-66.

However, in terms of combat characteristics, the WG-66 was superior to other models. The 7,62x25 mm cartridge provided an initial bullet speed of 487 m / s and a muzzle energy of 680 J. For comparison, competitors accelerated bullets to 300-320 m / s with an energy of not more than 310 J. Due to this, WG-66 hit further and more precisely, and also showed greater penetrative effect, especially at considerable distances.

NNA began to study other parameters, and at this stage WG-66 revealed new problems, this time of an economic nature. It turned out that the serial submachine gun of this model will cost at least 410 marks. Imported Šcorpion could be purchased at a price of 290-300 marks apiece. 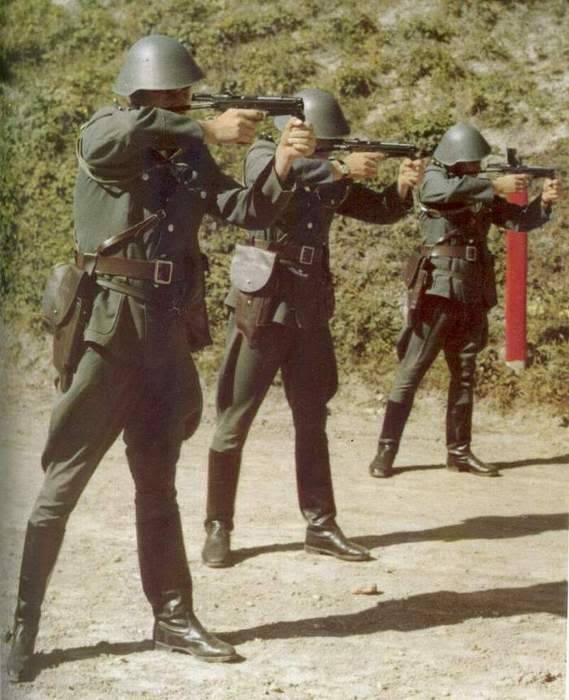 Fighters NNA GDR with submachine guns PM-63 RAK Polish production
Calculations showed that the preparation and launch of production of WG-66 would be advisable only with a series of at least 300 thousand products by 1975. This was about six times more than the plans of the Ministry of Defense and other structures, which became a new reason for criticism. “Excess” products could be sold to foreign countries, but access to the international market was a separate problem, and its success was not guaranteed.

In addition, in the future there would be problems in the production line. The GWB factory could handle an order for 50 thousand submachine guns - but not 300 thousand. The existing production facilities were already loaded with the release of products of strategic importance: Kalashnikovs and washing machines.

Having examined the results of comparative tests, the Ministry of Defense of the GDR conducted additional research work comparing 7,62x25 mm TT and 9x18 mm PM cartridges and determining the most successful and promising. According to the results of this study, a 9x18 mm cartridge was recommended for further use. In this regard, there was a proposal to transfer the WG-66 submachine gun to a new ammunition.

Calculations showed that the WG-66 under the PM cartridge will have acceptable combat characteristics, but it will be 300 g lighter than the basic version. In addition, such a product in the series would cost about 330 brands - against the original 410. However, the proposal for modernization did not receive much support. The customer was already disappointed in the base WG-66, and its new version was not taken seriously.

In early 1970, the prospect of WG-66 was finally closed. The military department ordered to stop all work on this model. To equip the NNA, it was now planned to purchase foreign products. Following the army, such a decision was made by other structures. On this история A curious project ended, and the Polish PM-63 RAK and Czechoslovak Šcorpion vz.61 entered service.