Cargo-passenger ferry for the Far East laid in Kerch 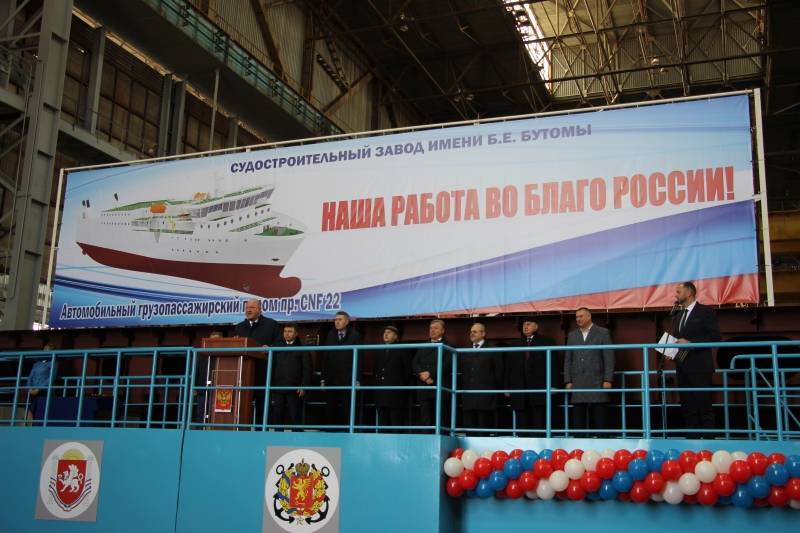 In Kerch, a freight and passenger ship (ferry) of the CNF22 project was laid. The ceremony was held at JSC "Shipbuilding Plant named after B.E. Butoma" (former Shipyard "Gulf"). This was reported by the Federal Agency for Sea and River Transport (Rosmorrechflot).


A cargo and passenger ferry is being built to organize regular passenger traffic between the seaports of the Far East. It is specified that the ferry will connect Kamchatka, Sakhalin and the Primorsky Territory. Now this function is mainly performed by air carriers.

The ship will be delivered on December 15, 2021, the ferry will be transferred to the customer at the pier of the seaport of Petropavlovsk-Kamchatsky. The construction cost is 3 billion 100 million rubles.

The CNF22 project vessel is designed to carry 150 passengers, cars and trucks, buses, wheeled and tracked vehicles, 20- and 40-foot containers. It has a feed cargo handling scheme. Main exploitation area: Sea of ​​Japan, Sea of ​​Okhotsk and the Bering Sea, including the islands of the Kuril Ridge and the adjacent Pacific Ocean.

The autonomy of the vessel in terms of fuel, oil and provisions is 25 days. The vessel autonomy in terms of water reserves is 5 days.

Photos used:
Federal Agency of Sea and River Transport of the Russian Federation

We are in Yandex Zen
Laid the keel of the first Soviet-era icebreaker with a capacity of 25 megawatts
List of CIA-funded Russian public organizations
86 comments
Information
Dear reader, to leave comments on the publication, you must to register.