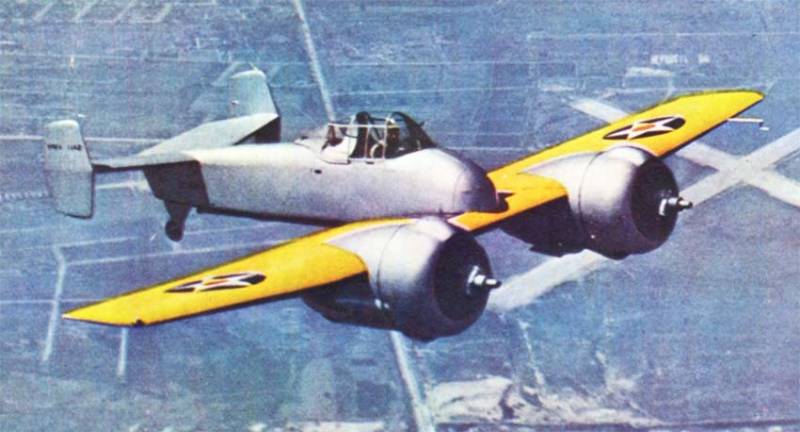 To deck aviation special requirements are imposed, which can lead to the appearance of unusual designs. A striking example of this is the American project Grumman XF5F Skyrocket, according to which the Navy could get its first twin-engine fighter.

In September 1935, the U.S. Navy Aeronautics Bureau issued requirements for a promising carrier-based fighter. Document SD-24D stipulated the creation of an aircraft with the highest possible flight characteristics, surpassing existing models. Several aircraft manufacturing companies joined the work. Soon, the fleet considered several projects, but not a single one arranged it.

In January 1938, the Bureau formed a new terms of reference SD112-14, taking into account the experience of previous work and recent progress. In accordance with the new document, the future fighter with a mass of 9 thousand pounds (4,1 tons) was to reach speeds of more than 480-500 km / h and show the highest possible rate of climb. The take-off distance with a headwind of 25 knots was limited to 60 m. Armament - two 20 mm guns and two 7,62 mm machine guns, as well as 90 kg of bombs. The developers were recommended to consider a single and twin engine scheme. 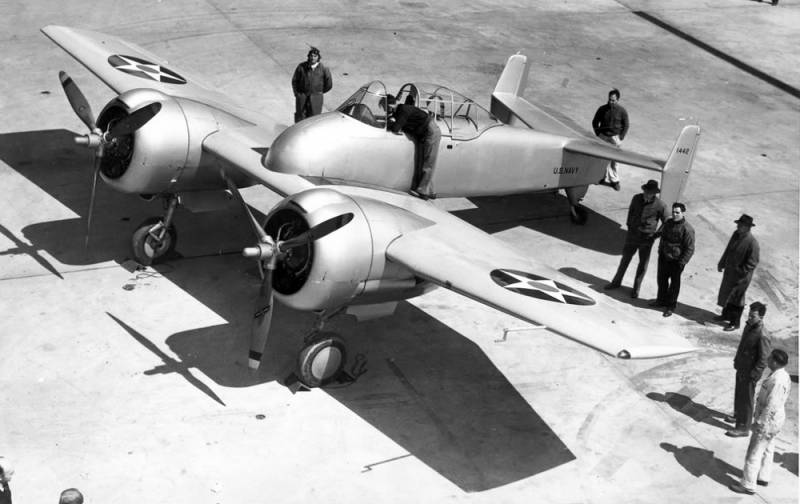 Preparing for departure. Photo Aviation-history.com
In April, Grumman presented its project with a working designation G-34. He proposed the construction of a twin-engine fighter with air-cooled engines and a special layout of the airframe. According to calculations, the new design made it possible to obtain all the desired flight characteristics.

The following months were spent on studying the project, and on July 8 a contract appeared for the completion of work, construction and testing of an experimental aircraft. Project received navy XF5F designation, and the future prototype is the XF5F-1 index. The name Skyrocket was also used. Already in October, began testing the model in a wind tunnel.

According to the results of the purges, the final appearance of the future XF5F was formed. The design was based on the traditional architecture of twin-engine aircraft with wing nacelles, but major changes were made to it. The rearrangement of the power plant, fuselage and plumage made it possible to obtain both general advantages and benefits in the context of operation on aircraft carriers.

Airplane with folded consoles. Photo Aviation-history.com
The aircraft received a direct wing with two spars, equipped with hinges for folding. On the center section there were two engine nacelles, maximally displaced inward. Inside the wing, it was proposed to place the protected fuel tanks with a neutral gas filling system.

Due to the close proximity of the engines and screws, it was necessary to abandon the protruding nose of the fuselage, and its fairing was located directly on the wing. As a result, the fuselage was distinguished by a smaller elongation, which gave the aircraft a specific appearance. The nose compartment of the fuselage was intended for mounting weapons; behind it was a single cockpit and an instrument compartment.

The tail unit was built according to the H-shaped scheme. Keels were placed in line with the engines. This improved the plowing airflow and increased the efficiency of all rudders. 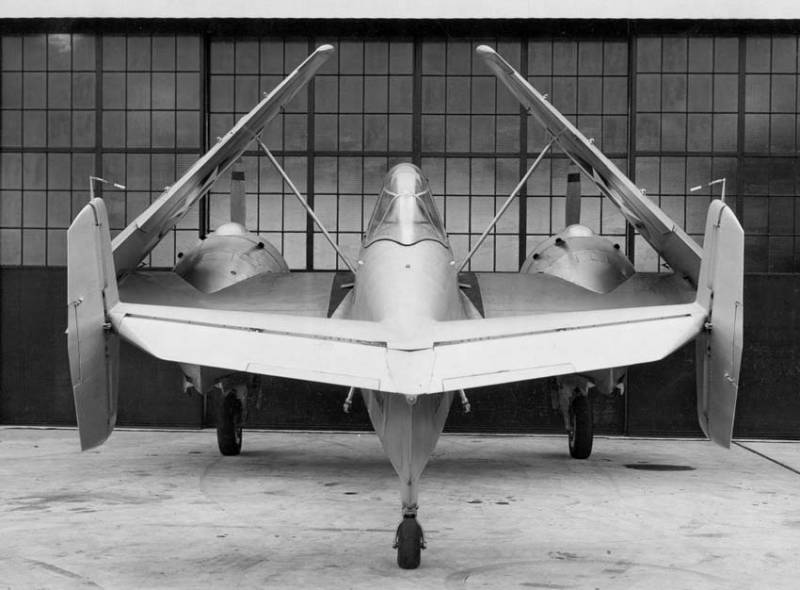 With the wing folded down, the machine’s diameter decreased almost threefold. Photo Airwar.ru
For some time, the issue of engines was resolved. The development company insisted on the use of well-developed Pratt & Whitney R-1535-96 engines with a capacity of 750 hp, but the Navy wanted to use Wright XR-1820-40 / 42 products (two versions with different directions of rotation) with a capacity of 1200 l .with. For obvious reasons, the final version of the project included more powerful engines, which required some modification of the airframe. XR-1820 engines were equipped with Hamilton Standard three-blade propellers.

The chassis included two retractable main struts under the engines and a fixed tail wheel on the fuselage. At the tail of the aircraft was also a landing hook with a hydraulic drive.

The initial requirements included arming the aircraft with two guns and two machine guns. At the turn of 1938-39. 7,62 mm weapon demanded to replace 12,7 mm systems. It was also proposed to equip the fighter with 40 light anti-aircraft bombs. In the future, their number was reduced. 20 bombs managed to be placed in special containers under the wing. Nevertheless, the XF5F-1 prototype aircraft did not receive regular weapons and was tested without it. 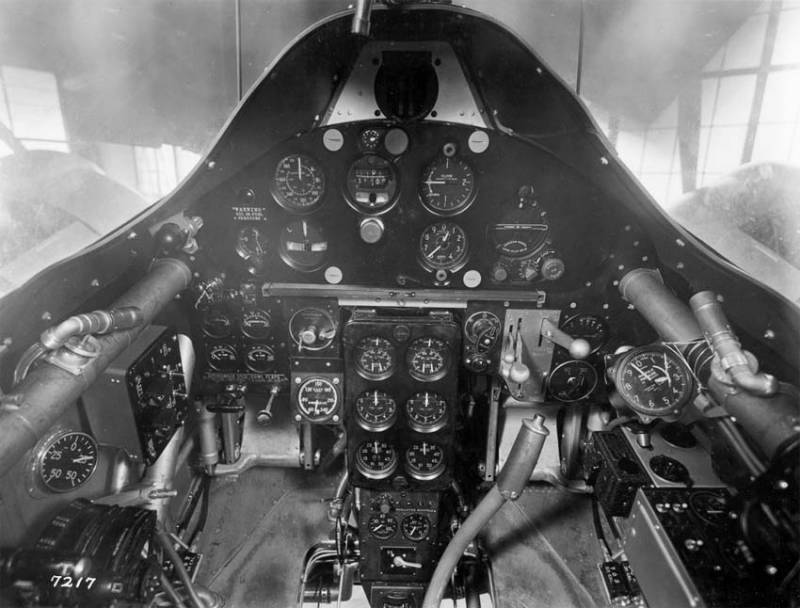 Aircraft controls. Photo Airwar.ru
In the last months of 1939, Grumman began building an experimental fighter, and the machine was ready early next year. It had a wingspan of 12,8 m (6,5 m when folded), a length of 8,75 m and a parking height of less than 3,5 m. Dry weight did not exceed 3,7 tons, normal takeoff - 4,6 tons, maximum - 4,94 tons. By weight characteristics, the aircraft did not meet the requirements, but the developers managed to negotiate with the Navy and settle this problem.

On April 1, 1940, the Grumman test pilot first flew the prototype XF5F-1 into the air. The plane performed well, but showed some flaws. Over the next few months, experts were engaged in testing the equipment, determining its characteristics and eliminating identified shortcomings. The first test phase, conducted at the airfield of the developer, lasted until the beginning of 1941 and included approx. 70 flights.

During the tests, a maximum speed of 616 km / h was achieved. The rate of climb exceeded 1200 m / min - by 50-60 percent. higher than other fighters. The ceiling is more than 10 km, the practical range is 1250 km. Thus, in range or rate of climb, the experienced XF5F-1 exceeded existing deck aircraft, but lost them in speed.

One of the test flights. Photo Aviation-history.com
The aircraft had good maneuverability, but in some cases there were excessive loads on the control stick. The special design of the fuselage did not interfere with the forward vision. The aircraft could continue flying with one engine running. However, some time had to be spent on fine-tuning the oil cooling system, hydraulics and other units. In addition, the issue of armaments remained unresolved. Requirements of this kind constantly changed, and the XF5F-1 remained unarmed until the very end of the test.

After completion of the refinement, in February 1941 the pilot aircraft was handed over to the Navy for further testing. Over the next few months, the XF5F-1 Skyrocket was compared with other promising samples.

Quickly enough it became clear that the experienced Grumman fighter has no decisive advantages over competitors and, most likely, will not win the competition. The development company began to lose interest in its own project, although it continued to cooperate with the Navy. Soon, negative forecasts came true. The winner of the program was Vought. In the summer of 1941, she was given an order for 584 F4F-1 fighters.

Experienced XF5F-1 with an elongated nose, April 1943. Photo by Aviadejavu.ru
However, the XF5F-1 was not abandoned. This machine received the status of a flying laboratory, and it was planned to be used in new studies in the interests of carrier-based aviation. Flights and tests of various kinds continued over the next several years and provided the collection of necessary data. In 1942, two accidents occurred, after which the aircraft was restored and returned to operation.

In 1942-43 experiments were carried out with a complex of weapons. We studied the installation of different sets of machine guns and cannons. One of the consequences of this was the appearance of a new nose of the fuselage. The enlarged fairing protruded beyond the leading edge of the wing.

The last flight of the XF5F-1 took place on December 11, 1944. Due to a landing gear failure, the pilot had to land “on the belly”. The plane was seriously damaged, and they decided not to rebuild it. Soon, the damaged machine became a kind of simulator for practicing the rescue of pilots. A few years later she was sent for scrapping. 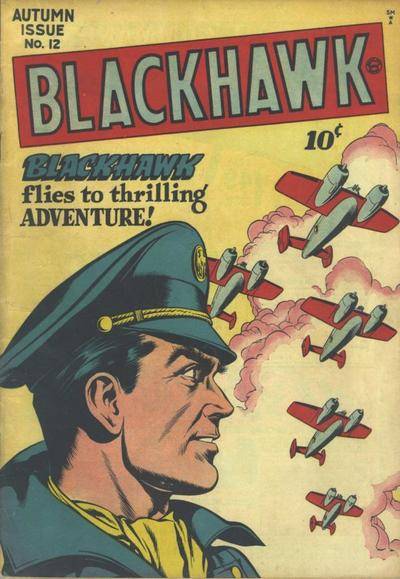 F5F Skyrocket Aircraft is a fictional Blackhawk squadron. The cover of the 12th issue of the magazine, 1946. Quality Comics Publishing House
Meanwhile, one of the publishers released a Blackhawk comic book series about the adventures of a fighter squadron. In the fictional world, the F5F Skyrocket fighter has reached the series and exploitation; the main characters used this technique from 1941 to 1949. Obviously, the authors of the comic were not attracted by the combination of technical characteristics, but by the unusual and recognizable appearance of the aircraft.

The aim of the XF5F Skyrocket project was to create a promising carrier-based fighter with enhanced flight performance. Such a problem was only partially solved. The resulting aircraft had good maneuverability and rate of climb, but lost in other ways. Such a mixed result did not suit the customer, and the project was abandoned.

In parallel with the deck XF5F, the ground fighter XP-50 was being developed. He repeated the main decisions of the base project - and the result was similar. The XP-50 could not compete with other machines and did not go into the series.

Despite the abandonment of production, the XF5F-1 proved to be useful in a new quality. In 1941-44 he was used to gain experience in operating twin-engine fighters, and then he helped prepare rescuers. U.S. Navy carrier-based aviation was on the verge of a new era, and soon the experience gained practical application.

We are in Yandex Zen
Deck F-8 Crusader, its predecessors and descendants (Part of 1)
An-12 in Afghanistan
14 comments
Information
Dear reader, to leave comments on the publication, you must to register.