Rule, Bolivia, by the seas! 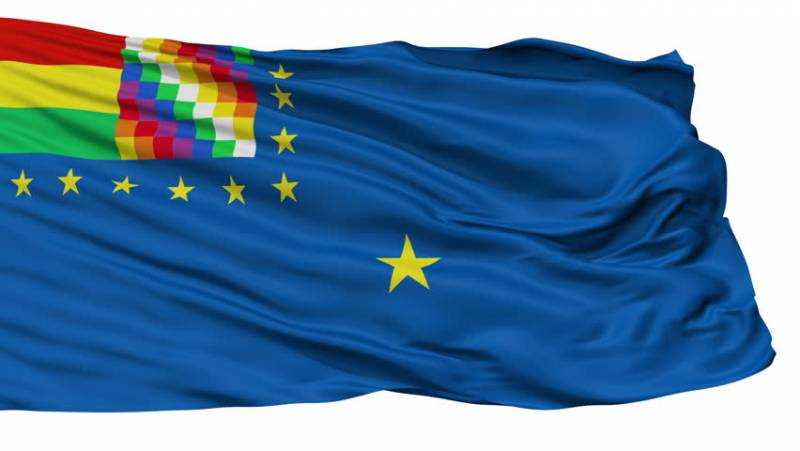 Flag of the Navy of Bolivia

If you talk about the Navy of Bolivia, then you will be suspected of either problems with geography or problems with your head as a whole. However, oddly enough, the Navy of Bolivia, a landlocked country, in principle, does not just exist, but even brought the strength of sailors to 5000. This is probably one of the most powerful fleets among countries that do not have access to the sea surface. And the very original name of the Navy of Bolivia for the Russian ear is perceived as something grandiose - Armada Boliviana.

The stolen dream of the sea

In fact, behind the pretentious "Armada Boliviana" lies an old complex of territory loss. Until 1883, Bolivia not only had access to the Pacific Ocean, but also operated several ports on the 400-kilometer strip of the coast. The end of Bolivia’s oceanic dreams was laid by the Second Pacific War, also known as the Navy War, because the conflict broke out solely on the basis of the struggle for the right to extract natural resources, in this case, saltpeter. 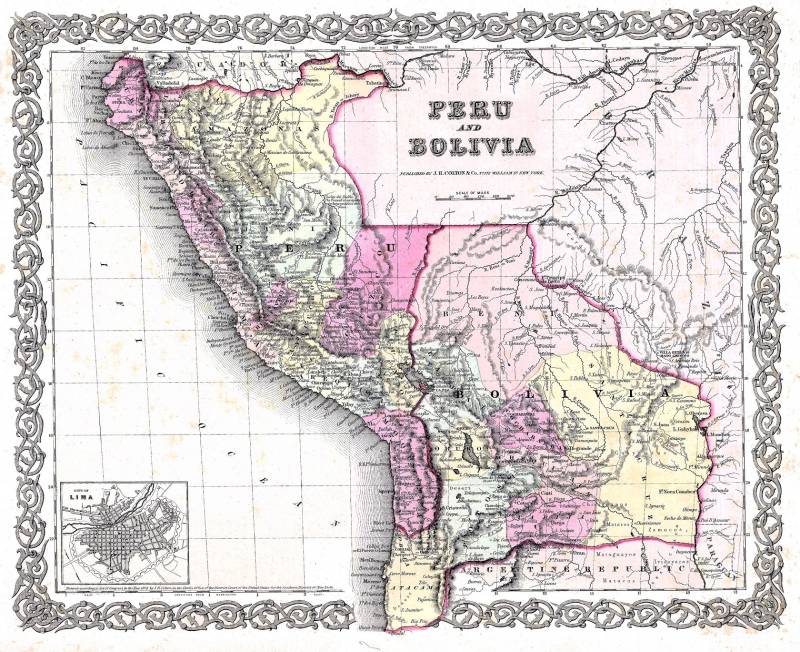 Map of Bolivia before the war
Bolivia, united with neighboring Peru, opposed Chile. As a result, Bolivia lost the war, having lost simultaneously with access to the ocean large south-western territories. The defeat was so painful for the country's Navy that it is still on the Bolivian flag fleet in the lower right corner a lone star flaunts, symbolizing the memory of the Bolivians about the lost territory and the vastness of the ocean.

Another reminder of the phantom pain of the lost territory is the country's national holiday without sea open spaces - Sea Day, celebrated every year on March 23. On this day, of course, the navy also takes part in the celebrations. For the most part, this is a sad day for the Bolivians, because, as you know, countries that do not have serious international influence often have huge ambitions. Even schoolchildren take part in the Sea Day parade, in which from childhood they bring up the spirit of revenge and return to the Pacific coast.

The beginning of a new "fleet"

A peculiar beginning to the modern Bolivian fleet was laid back in 1939, when the army command realized the need for the availability of watercraft in the country strewn with rivers for the prompt delivery of military units to a particular area. Therefore, in the city of Riberalta, at the confluence of the Madre de Dios into the Rio Beni, the School of Mechanics and Navigation was founded. It is worth noting that from the first days one of the goals of schooling was the formation of “marine self-awareness” among cadets. Another evidence of hopes for access to the ocean. 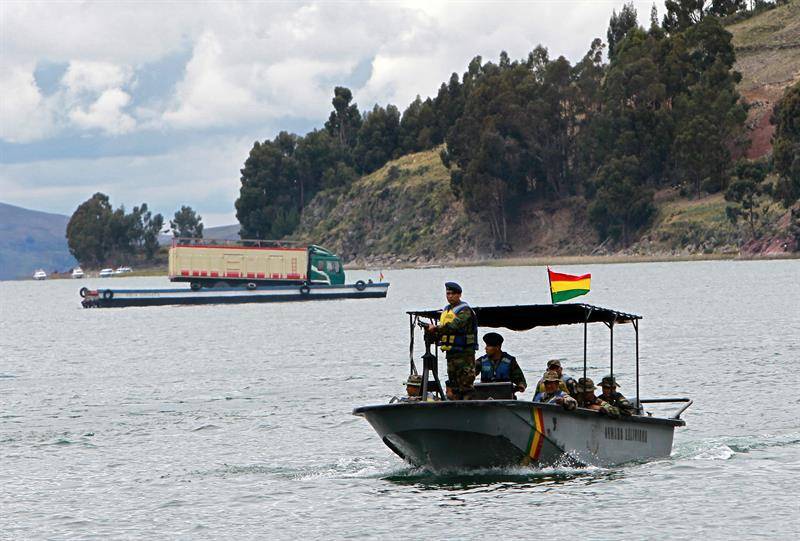 The official foundation of the future Navy took place in January 1963, when the "military forces of rivers and lakes" were formed. There are plenty of rivers and lakes on the territory of Bolivia, and the country is forced to share the large alpine lake Titicaca with its former ally - Peru. In the beginning, the new “forces” consisted of four American boats with 1800 personnel. "Sailors" almost all were picked up from simple infantry units. Soon, the painful syndrome of loss of access to the sea prevailed, and the “forces of rivers and lakes” were renamed Armada Boliviana.

At the moment, the Bolivian fleet is armed with 70 to 160 different vessels, including inflatable motor boats and non-self-propelled boats for the transport of quick reaction groups. The backbone of patrol vehicles are Boston Whaler boats, which in fact are just motor boats, and boats purchased in China from type 928 YC. The fleet also has eight assault boats, several transports, hospital ships, a training ship, etc. 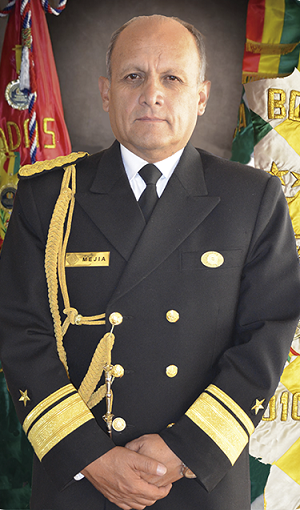 Orlando Mejia Heredia Mage
The fleet includes the marine corps, naval military police and even aviation, the basis of which are light-engine aircraft of the American company Cessna. The Navy special forces are somewhat different: the naval intelligence service, a diving training center, a quick reaction group and the Blue Devils special unit.

This invincible armada was commanded by Admiral Palmiro Gonzalo Yarjuri Rada, who graduated from the Bolivian Navy Naval Academy with a warrant officer degree in December 1986. But after the coup he was removed from command. Now the head of the fleet is Orlando Mejia Heredia Meige.

Return to the ocean

The revanchist sentiment in Bolivia associated with the loss of the coast is more than strong. Therefore, in 1992, the country's leadership signed a contract for a 99-year lease of a five-kilometer strip of coast with Peru, i.e. with a former ally. The project received a very symbolic name "Boliviamar". However, at that moment Bolivia never received a direct access to the sea. Various interstate disagreements and interventions of a third party - Chile, which would never want to allow the defeated party any hope for a true fleet, interfered. 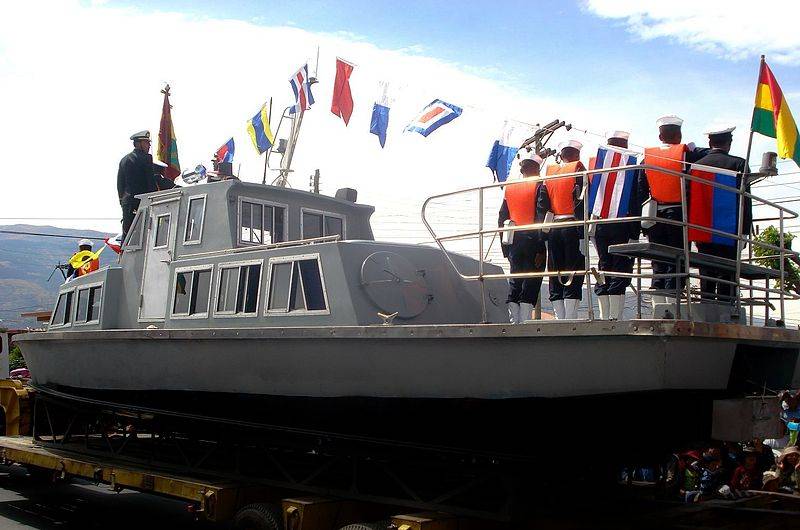 Bolivian Navy Parade
Finally, in 2010, the project was implemented. True, in a somewhat truncated form. The strip of the "Bolivian" coast was an absolutely deserted unequipped territory without the slightest hint of any roads or other infrastructure. But the warships of Bolivia received the right to freely enter the Ilo port of Peru on the rivers. But the government paid much more attention not to the native fleet, but to trade and tourism projects.

The then president, Evo Morales, shared truly Napoleonic plans. He hoped to build a port, hotel in the new "Bolivian" territory and open a free trade zone. A little later, however, it was announced the construction of a naval school, where they would train fleet officers. In honor of these events, a very peculiar monument was even installed on the deserted coast. 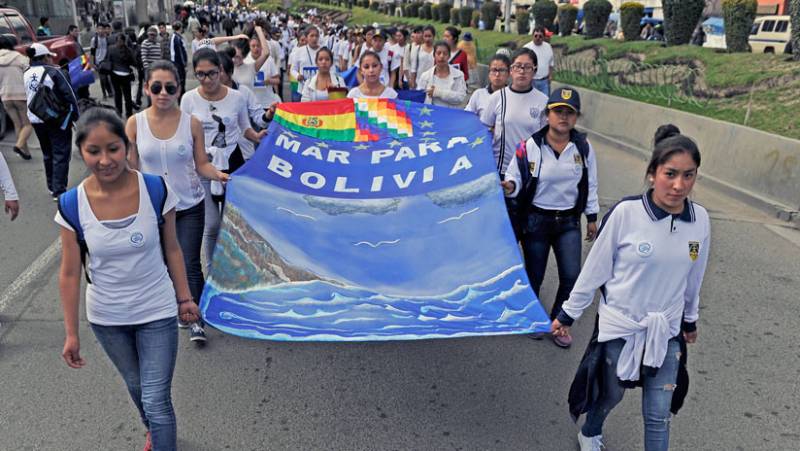 At the same time, all this time Chile in every possible way impeded the realization of the dream of Bolivian sailors to return to the "big water". The stumbling block was the results of the aforementioned Second Pacific War. This regional war for resources has acquired for Chileans and Bolivians no less significance than the Great Patriotic War for us. Bolivia, which bombarded international courts demanding not only to calm the enemy, but also to return the seized territory to them, was not inferior. 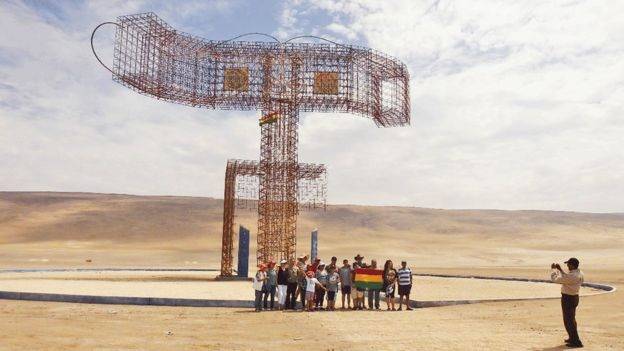 Bolivians on Boliviamar
After the coup that overthrew Morales, the situation around the Boliviamar hung. Actually, like an international court. Will Bolivian “children's” fleet ever plunge into the “adult” ocean pool? Who knows, if you recall the number of military coups in South America, which have become almost a tradition ... And no one guarantees that turbulent coup flows will not begin in Chile itself.

We are in Yandex Zen
We are building a fleet. Theory and Purpose
About the future of underwater robotics
24 comments
Information
Dear reader, to leave comments on the publication, you must to register.