By the thirties of the last century, cars had learned to develop very high speeds, which resulted in the need to study aerodynamics. In our country, remarkable results of this kind were obtained in 1934. The first domestic streamlined car was the experimental GAZ-A-Aero designer Alexei Osipovich Nikitin.

Work on a new topic started in 1934 and was carried out by the automobile department of the Military Academy of Mechanization and Motorization of the Red Army (VAMM RKKA) at the initiative of A.O. Nikitina. Other organizations that had the necessary scientific and technical base were involved in the research.

By that time, cars had reached speeds of up to 100-110 km / h, which was facilitated by the use of new chassis designs, more powerful engines, etc. Foreign experience has shown that an additional increase in performance can be obtained by improving the car body and reducing air resistance. 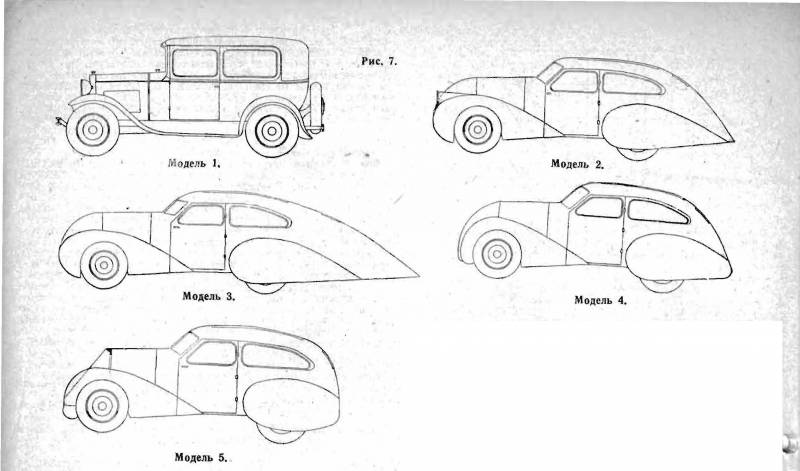 Variants of models for blowing in a wind tunnel. 1 - serial GAZ-A; 2 - future prototype; 3,4,5 - other options for aerodynamic configurations. Graphics of the magazine "Motor"
Research at VAMM began with a theoretical study of existing issues and the search for optimal solutions. I managed to find the main ideas that contribute to improving the performance. At the same time, they could be combined in different ways and get different results.

A. Nikitin and his colleagues worked on four options for the streamlined body and assembled the corresponding large-scale models for blowing in the wind tunnel of the Moscow Aviation Institute. Together with them, it was planned to test the model of the GAZ-A car with the original body type “phaeton”. Four test models had significant similarities, but differed in the forms of different aggregates, and, accordingly, in characteristics.

Tests showed a sharp decrease in the coefficient of air resistance with direct blowing of the model. For different models, it amounted to 31-66 percent. from the characteristics of the original car. Crosswind studies have also been carried out, showing the clear advantages of the new bodies. 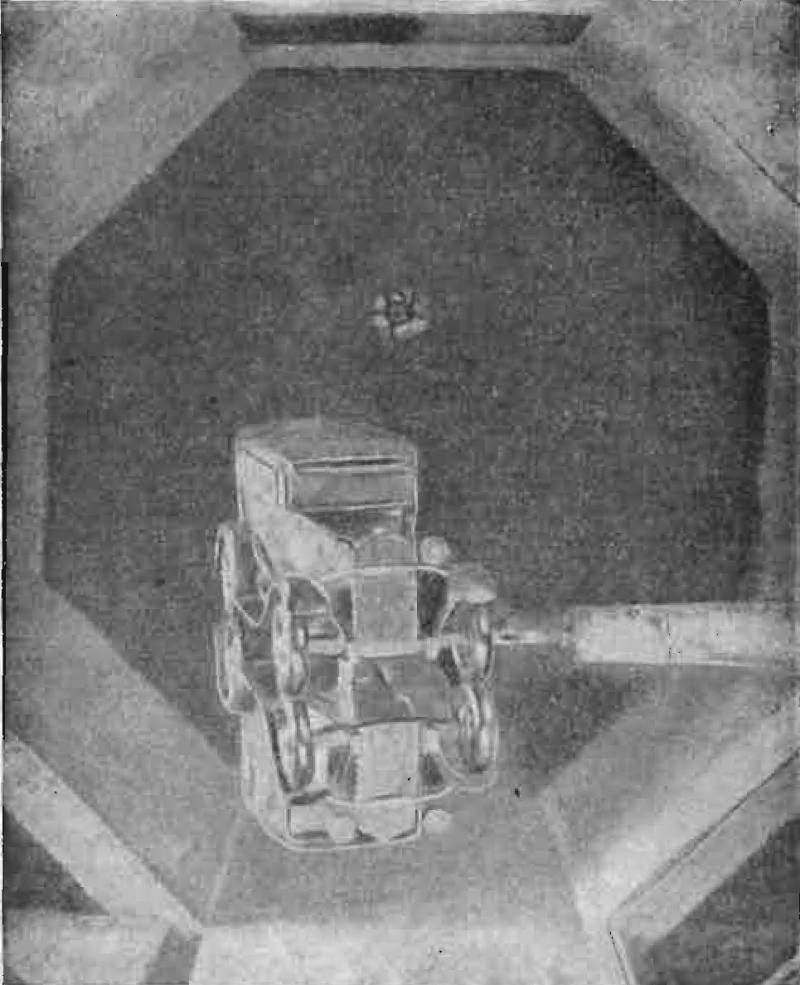 Tests of the GAZ-A model in a wind tunnel. Photo of the magazine "Motor"
Detailed results of calculations and tests were published in the magazine Motor, No. 2 for 1935. A. Nikitin himself was the author of the article "Streamlined car on a GAZ-A chassis".

In 1934, the VAMM RKKA together with the experimental workshop of the Gorky Automobile Plant built and tested a prototype car with a streamlined body. The basis for it was the modified GAZ-A chassis - for this reason, the experimental car later received the name "Streamlined GAZ-A" or GAZ-A-Aero. To control the results, a second GAZ-A car was used in the basic configuration.

The prototype car retained the frame and chassis of the base GAZ-A. The power plant at different stages of testing included a full-time engine or its forced version. The motor was modernized by installing an aluminum head and increasing compression, which led to an increase in power to 48,4 hp. The mechanical transmission has not changed. Governing bodies remained the same. 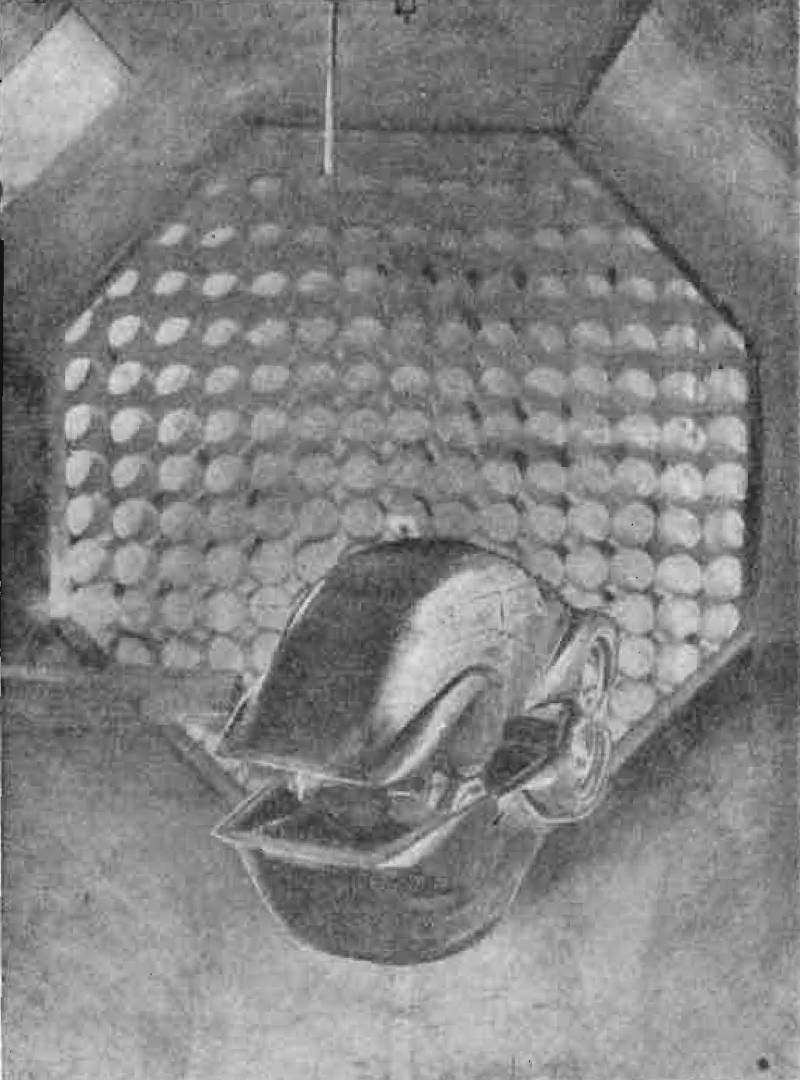 Tests of the model of the future GAZ-A-Aero. Photo of the magazine "Motor"
The new streamlined body had a mixed design. Curved steel sheets of various shapes were mounted on a wooden frame. To improve aerodynamics, mainly curved parts of different curvatures were used. The engine was covered with a curved frontal fairing with shutters and sides of a similar design. Behind the hood was a V-shaped windshield. The roof of the body smoothly passed into an inclined tail with a pointed rear.

The wheels were covered with teardrop-shaped wings. The front fairings had side cutouts for the steered wheels, and the rear fairings were solid. On the front wings, semi-recessed headlamp fairings were provided.

Due to the large wings had to abandon the rear doors. The front doors received small handles. In addition, they completely overlapped the steps. All this was due to the need to reduce air resistance. 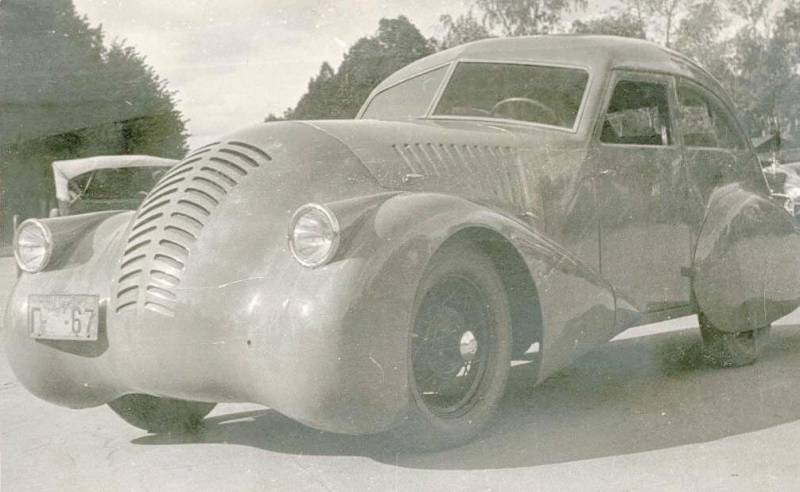 Prototype on trials. Photo Denisovets.ru
The car GAZ-A-Aero due to the special body had a length of 4970 mm. Despite the new wings, the width remained at the level of the base machine - 1710 mm. Height - 1700 mm. Curb weight with refueling and spare parts - 1270 kg, i.e. almost 200 kg more than the GAZ-A. It was assumed that further improvement of the design will make it possible to equalize the mass of two bodies. During the tests, the vehicles carried measuring equipment and a team of five testers. At the same time, the mass of GAZ-A reached 1625 kg, and GAZ-A-Aero - up to 1700 kg.

GAZ-A-Aero tests were carried out on the routes of the automobile plant and on the roads of Gorky. Experienced and control cars over several weeks traveled thousands of kilometers in different conditions and helped to collect a lot of data for subsequent analysis. In general, it became clear that the streamlined body has serious advantages over the standard chaise.

The streamlined car had better dynamics. Acceleration from standstill to 70 km / h took 27,5 seconds against 35,5 s for GAZ-A. A production car with a lot of drag slowed down faster. So, the attenuation of speed from 70 to 40 km / h occurred at a distance of 330 m. GAZ-A-Aero under the same conditions passed 440 m. 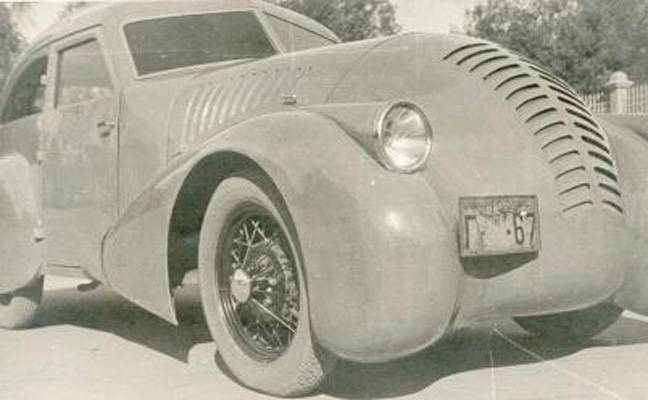 View from a different angle. Photo Denisovets.ru
In a city, a streamlined car showed very modest savings. At an average speed of 30 km / h, this car spent 5 liters of gasoline on 46,7 km of track, and fuel economy was only 3%. In other conditions, the benefits were brighter. So, on the highway with continuous movement at a speed of 50 km / h, the savings reached 12% relative to the consumption of GAZ-A. The maximum gasoline savings of 26,2% were obtained at 80 km / h. Comparison at higher speeds was not possible due to the limited characteristics of the GAZ-A.

The power spent to overcome the resistance to movement was measured. At 50 km / h GAZ-A spent 12,2 hp on this, GAZ-A-Aero - 8 hp (saving 34%) At a speed of 90 km / h, these parameters reached 46 and 29 hp, which corresponded to savings of more than 36%. At the same time, the experimental machine had a power reserve for further acceleration, and at a speed of 100 km / h the cost of resistance reached 37 hp.

The streamlined car showed the best performance in crosswinds of different strengths at different angles. In addition, the high-speed ride was less noisy. On the serial chaise there was a breakdown of the vortices from the windshield and the rear of the body, which caused additional noise. On the new body, there were no such problems.

Side view. The profile of the body and individual elements are clearly visible. Photo Denisovets.ru
Professionals and the public were able to find out the detailed results of sea trials from the article by A. Nikitin “Road tests of a streamlined car on the GAZ-A chassis”. She was published in the March issue of Motor magazine in 1935.

According to the test results of two cars VAMM RKKA and GAZ made several key conclusions. The main one concerned the general benefit of streamlined bodies. Even when installed on a fairly old chassis, such a product gave a noticeable increase in running and economic characteristics. At the same time, the GAZ-A-Aero body was far from optimal from the point of view of aerodynamics - the limitations imposed by the chassis design affected.

It was proposed to continue the study of automotive aerodynamics and take it into account when creating new samples. The development of automotive technology and roads in the future should have led to a new increase in speed, which is why streamlining became a decisive factor. New solutions could be implemented on small-scale sports cars, and then transferred to general-use equipment, as was often done abroad.

View of the characteristic tail. Photo Carakoom.com
In 1934, after completion of the tests, the GAZ-A-Aero prototype was handed over to the Automobile Council of Avtodor Society for new research. There is no information about his future fate.

After the success of the GAZ-A-Aero pilot project, the specialists of the VAMM RKKA automobile department continued theoretical research in a number of areas, including on the topic of aerodynamics. Soon, new theoretical results appeared, recommended for use in future projects of cars.

However, active work in this direction lasted only a few years. In the late thirties, scientists had to deal closely with the subject of military vehicles, and experiments with streamlining went by the wayside. Real successes in this direction were obtained only after the war. During this period, the production of modern cars with a streamlined body started, and the achievements of A.O. Nikitin and his colleagues.

We are in Yandex Zen
Multi-axle rocket carriers
Prospects for the development of military vehicles for the period to 2020 g
11 comments
Information
Dear reader, to leave comments on the publication, you must to register.