March 19, Russia marks the Day of the Submariner 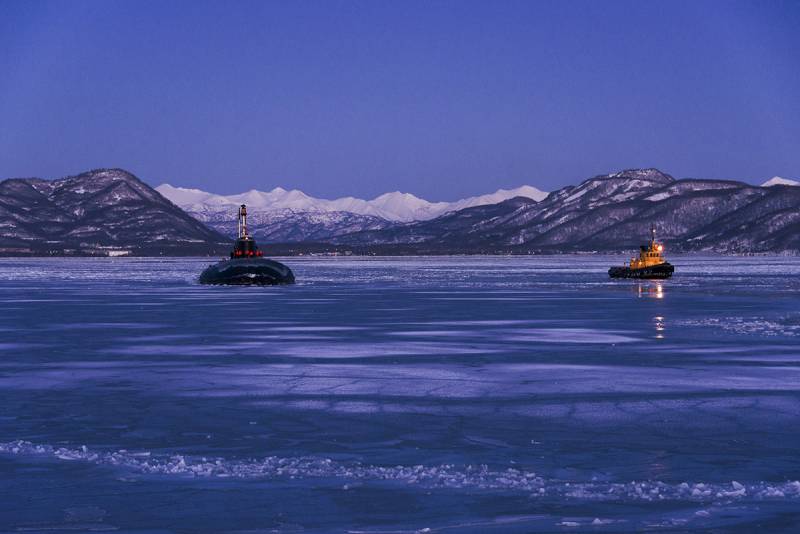 Every year on March 19, Russia celebrates the Day of the Submariner. This professional holiday is celebrated by all military personnel, veterans, as well as civilian personnel of the submarine forces of the Russian Navy. Despite the fact that the first submariners appeared in the Russian navy as early as the beginning of the 1996th century, they gained their professional holiday only in XNUMX.

March 19 (March 6 in the old style) of 1906, by decree of the Russian Emperor Nicholas II, submarines were officially included in the list of classes of ships of the Russian fleet. The same decree, signed personally by the emperor, included the first 20 submarines built and purchased at that time in the Russian fleet. Thus, our country became one of the first states to acquire its own submarine fleet. Exactly 90 years later, in 1996, the date March 19 was chosen to establish the annual professional holiday in the country - Day of the Submariner.

In this way, история The Russian submarine fleet officially totals 114 years. The first base of the Russian submarine fleet in 1906 was determined the Libava naval base, located today in Latvia. By order of the Maritime Department of the Russian Empire, new ships were not only allocated to an independent class, but also received a name. In those years they were called "hiding vessels", this name also reflects the nature of the use of combat submarines.

At the same time, the idea of ​​building submarines was not new and first appeared in the 1700th century in Holland. In Russia, Peter I turned to the idea of ​​building such ships in the XNUMXs. Naturally, all developments of those years were very primitive due to the insufficient level of industrial development of countries. A breakthrough for the submarine fleet was the XNUMXth century. In Russia, interesting developments that led to the creation of full-fledged submarines date back to this time. 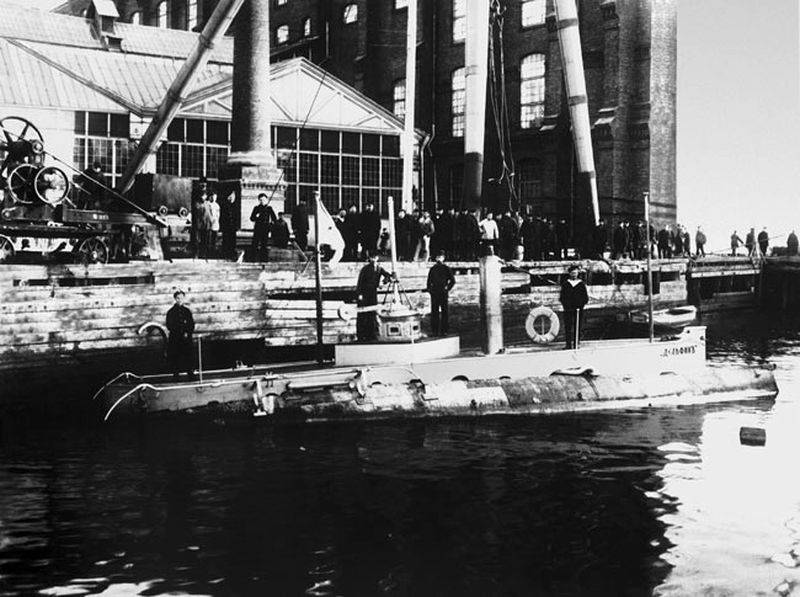 The first Russian combat submarine "Dolphin"
In 1834, in St. Petersburg, at the facilities of the Alexander Foundry, according to the project of the military engineer K. A. Schilder, it was possible to build a submarine, which the designer armed with missile launchers (the boat had three launchers from each side). In fact, the development of Schilder was the prototype of the shock submarines of the future with the vertical launch of missiles of various classes. The submarine was driven by 4 special strokes, the design of which resembled the shape of the legs of an ordinary duck. Rowers were arranged in pairs on each side of the boat, outside the sturdy hull. The construction was driven by sailors-rowers. At the same time, the underwater speed of such a boat was seriously limited and did not exceed 0,5 km / h, and this is with great efforts from the crew. In the future, a military engineer expected to equip the boat with an electric motor, but progress in this area in those years was so slow that the idea was never realized.

Only half a century later, the Russian inventor S.K. Dzhevetsky achieved tangible success in this direction. In 1884, he managed to install an electric motor on board a submarine of his own design. It was a small motor with a capacity of only 1 liter. s., but the decision itself was a breakthrough. In addition to the electric motor, Dzhevetsky also used a completely new source of electricity for his time - a rechargeable battery. Dzhevetsky’s boat was tested in the Neva, where it could go against the river at a speed of 4 knots. This submarine became the first submarine in the world to receive an electric motor.

The first combat submarine was built at the famous Baltic Shipyard in 1903-1904. It was a Dolphin submarine equipped with a gasoline engine and electric motor. The author of the project of this submarine was I. G. Bubnov. Despite the inevitable problems with the operation of a new vessel for the fleet, the sailors who served on the Dolphin, with dedication and enthusiasm, worked out the methods and rules for the daily operation of such warships, as well as the methods for the combat use of submarines. 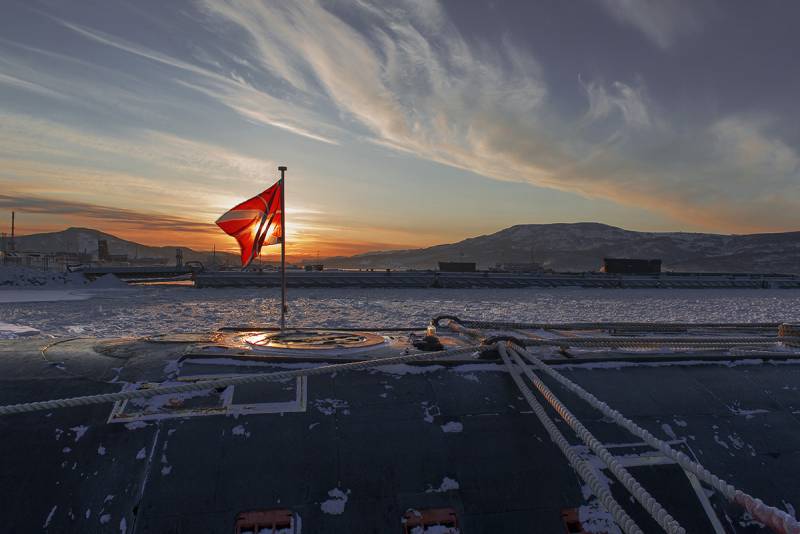 The most combat submarines in the history of the Russian submarine fleet are rightfully considered to be the Shch type submarine, they are also the Pike. Boats have become the most massive and one of the most famous projects of submarines during the Great Patriotic War. 44 such submarines took part in the war, of which 31 boats were killed for various reasons. Many decades after the end of the war, search engines continue to find dead ships of this project in the Baltic and Black Seas. Submarines with an underwater displacement of more than 700 tons continued their service even after the end of World War II. In total, 86 ships of this project of several series, which had serious differences, were built in the USSR. "Pike" served in all fleets, and the last of them left the fleet only in the late 1950s.

The most massive submarines in the domestic fleet were Project 613 boats, according to the NATO codification “Whiskey”. "Whiskey" was mass-produced in the USSR from 1951 to 1957. During this time, 215 diesel-electric boats were transferred to the Soviet fleet, which were developed under the influence of the latest German submarine projects at the end of World War II. The boats were very successful and remained in the service for several decades. Project 613 submarines had an underwater displacement of about 1350 tons, good underwater speed - 13 knots, and good autonomy - 30 days. During the entire service, the Soviet fleet lost only two boats of this project. Subsequently, 43 boats of the USSR were transferred to friendly countries, and another 21 submarines for this project were built in China for the Chinese fleet.

The fastest submarine in history was built in our country. This is a submarine K-162 (then K-222). The nuclear submarine built under Project 661 Anchar was nicknamed the Golden Fish. This was largely due to the high cost of building a submarine, which was made of titanium. The boat was built in a single copy, later the experience gained by the designers was used to create the 2nd and 3rd generation SSGNs, and the main work was aimed at reducing the cost and reducing the noise of the boat. Until now, it was the "Golden Fish" that holds the world record for underwater speed. In tests in 1971, the submarine demonstrated an underwater speed of 44,7 knots (almost 83 km / h). 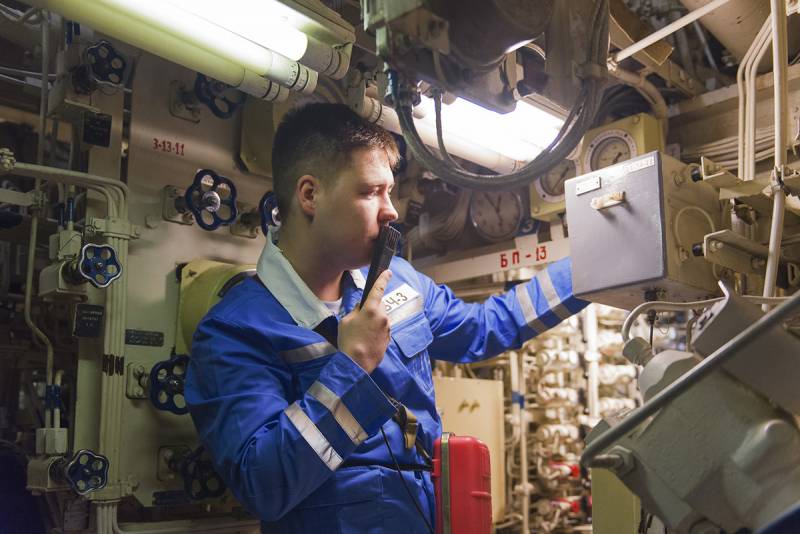 The largest submarines in history have also been created in our country. We are talking about the nuclear submarines of Project 941 Shark, according to the NATO codification Typhoon. The underwater displacement of the boats of this project amounted to no less than 48 thousand tons, which is practically comparable to the displacement of the only Russian aircraft carrier Admiral Kuznetsov. It is worth noting that the Sharks are twice as superior in submarine displacement to the modern Russian nuclear strategic boats of the Borey project and 18 times to the diesel-electric submarines of Project 677 Lada.

Submariner is a courageous profession

Service in a submarine is always fraught with risk, which exists even in peacetime, and during the hostilities increases many times over. The submarines of the Soviet fleet passed the test of the Great Patriotic War with honor. For military merits, approximately a thousand submariners were presented to government awards, twenty submariners became Heroes of the Soviet Union.

In battles with aggressors, the Soviet fleet suffered serious losses. In total, more than 260 submarines of various classes and projects took part in the Great Patriotic War. At the same time, during the years of World War II, the USSR submarine fleet lost 109 submarines for various reasons of a combat and non-combat nature. 3474 did not return to their native bases from the campaigns. Such data are published in the book "Martyrology of the dead submarines of the Navy of the Fatherland" by Vladimir Boyko.

The profession of a sailor remains dangerous in peacetime. We all have heard the disasters that have occurred in our fleet over the past few decades. This is the death of the Komsomolets nuclear submarine of the USSR Navy on April 7, 1989, which claimed the lives of 42 submariners, and the death of the Kursk nuclear submarine on August 12, 2000, killing 118 crew members. These disasters left scars not only in the hearts of sailors, but also ordinary citizens of our country. 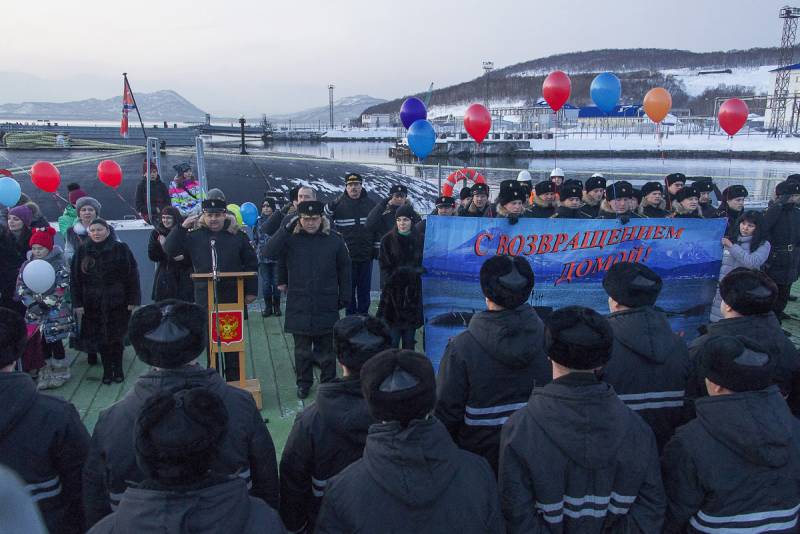 It is no coincidence that submariners have always been considered representatives of one of the most courageous, heroic and at the same time romantic professions. These people are distinguished by courage, courage, courage and selfless devotion to military duty. It is these qualities that explain the people's love and recognition of submariners, who, plunging into the depths of the oceans, are similar to astronauts departing for another flight beyond the Earth. Both submariners and astronauts work in environments that are unusual and aggressive for humans.

March 19, "Military Review" congratulates all citizens directly involved in this heroic profession, especially the submarine veterans of our fleet, on their professional holiday. Always come back home!

We are in Yandex Zen
19 March - Day of the Sailor Submariner
2010 Results of the Year (Part II)
48 comments
Information
Dear reader, to leave comments on the publication, you must to register.