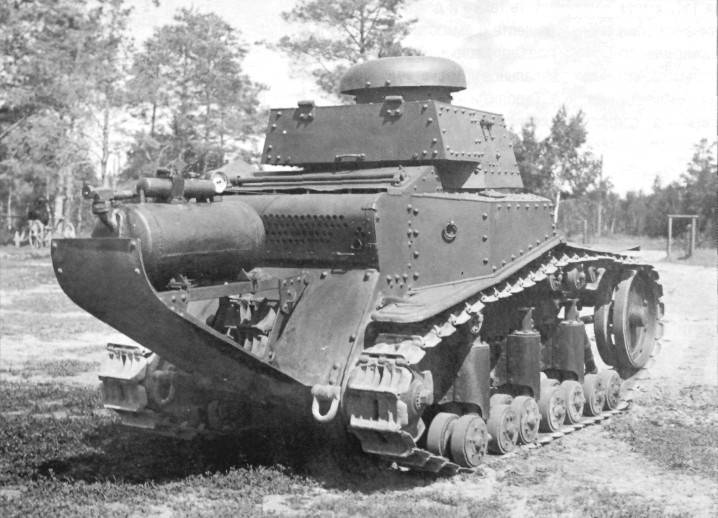 Chemical tank HT-18. On the beam of the "tail" installed device TDP-3

In the early thirties, work was carried out in the USSR on the so-called chemical armored vehicles capable of infecting and degassing the area or placing smoke screens. Soon, the so-called removable tank TDP-3 smoke device, with the help of which it was possible to create several types of chemical tanks with minimal effort. Some of them were able to reach exploitation in the army.

Early designs of chemical armored vehicles had a significant drawback. They proposed the construction of equipment from scratch or a significant alteration of finished samples, which did not allow to simplify production. In this regard, a new concept soon appeared, providing for the production of a universal chemical device suitable for installation on different platforms.

In 1932 (according to other sources, only in 1933) the Moscow Compressor plant created the first such set of equipment under the name “TDP-3 tank smoke device”. The complete assembly weighed 152 kg and had the smallest possible volumes. This made it possible to mount it on any existing tanks or vehicles. Different carriers could receive either one or two sets. In the latter case, minor pipeline processing was envisaged.

The main element of the TDP-3 device was a cylindrical metal cylinder with a capacity of 40 l, designed to store liquid "payload" of all permissible types. They used a cylinder for compressed gas, which creates pressure for the supply of chemicals, a spray device, a set of tubes, pressure gauges, etc.

The simplest version of the TDP-3 included the installation of all devices on the largest tank. It was also possible to rearrange the kit with the installation of parts together or at a distance from each other - depending on the characteristics of the carrier machine. 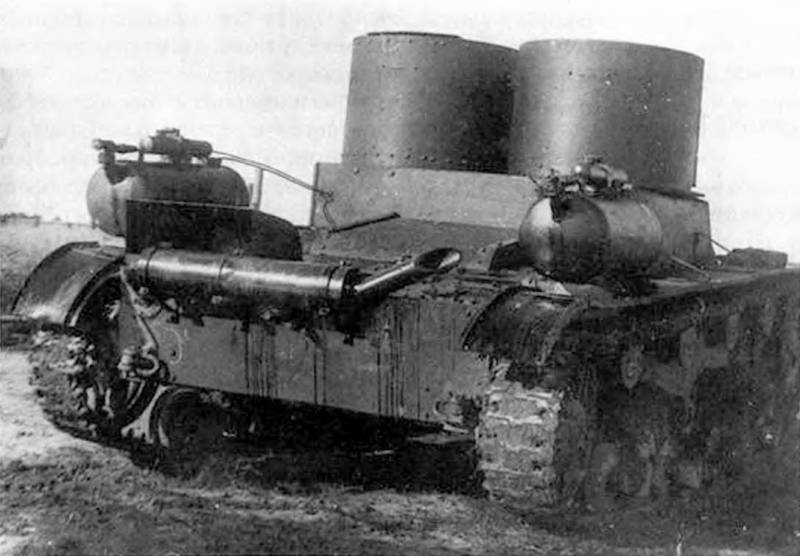 Chemical modification of the two-tower T-26, rear view
Using compressed gas from a cylinder or compressor of the machine, a working pressure of 8 to 15 kgf / sq.cm was created in the system. In this pressure range, 40 l of liquid was enough for 8-8,5 minutes of operation. When driving at a speed of 10-12 km / h, a chemical armored vehicle with 40 liters of mixture could process a section up to 1600-1700 m long.

Like other kits, TDP-3 could use different liquids. Using this device, it was possible to spray BWA or liquid for degassing. Also used to create a smoke screen. Regardless of the type of liquid, the principles of operation of the device were the same.

The first carrier of the TDP-3 kit was the HT-18 chemical tank. This sample was created in 1932 by the Institute of Chemical Defense under the guidance of engineers of Prigorodsky and Kalinin. The HT-18 was built by equipping the serial tank with a new universal device.

The base was taken by the light infantry tank T-18 / MS-1 arr. 1930. At that time, it was one of the main armored vehicles of the Red Army, and it was proposed to use it for various purposes. The HT-18 project retained almost all the components and assemblies of the tank and added new ones. The TDP-3 smoke device was placed on the upper beam of the so-called tail. Chemical equipment was located behind the stern sheet, and from the attacks from the front corners it was covered by the tank body.

In the fighting compartment, at the commander’s workplace, a simple control panel was installed. The nebulizers were driven by a sector with a lever, which was responsible for the intensity of the aerosol emission.

The HT-18 chemical tank lost a 37-mm gun in the tower; machine gun weapons remained the same. Otherwise, it was as similar as possible to the base T-18. Due to this, the chemical and linear tanks did not differ from each other in mobility, security, etc.

Experienced HBT-5
In 1932, the Institute of Chemical Defense, with the assistance of the Compressor plant, built the first and only experimental HT-18 tank. He was sent to the Scientific and Research Chemical Testing Ground of the Chemistry Improvement Courses for Commanding Officers (NIHP KhKUKS).

The KhT-18 passed the tests and showed the main tactical and technical characteristics at the level of the base sample. Accurate data on the TDP-3 tests are not available. The smoke appliance could probably do its job, but its characteristics were limited. The KhT-18 carried only 40 liters of chemicals, while other experimental chemical armored vehicles of that time had a stock of 800-1000 liters.

According to the test results, the HT-18 chemical tank did not receive recommendations for adoption. At the same time, his target equipment was considered suitable for use in new projects, and soon these ideas were put into practice. It should be noted that during this period the smoke instrument had to face competition: in parallel, other sets of similar purpose were created and tested.

In January 1933, two variants of chemical tanks with TDP-3 devices were immediately proposed by the Compressor Design Bureau. Two new models were built on a different base and had similar target equipment. The first of the new armored vehicles was to be built on the basis of the light tank T-26 in a two-turret version. This sample did not receive its own designation and remained in stories as the “T-26 chemical tank with the TDP-3 device."

In July 1933, the Experimental Plant Spetsmashtresta them. CM. Kirov assembled an experimental T-26 with TDP-3. The work was completed in the shortest possible time, since a serious alteration of the tank was not required. The standard weapons were removed from the towers of the experimental T-26, two sets of TDP-3 were mounted on the aft of the fenders, and control sectors were installed in the fighting compartment.

Chemical devices were used in their original configuration. A cylinder was attached to the shelf, on which the remaining parts were located, including sprayers. Using a pair of pipes, the TDP-3 was connected to the inhabited compartment of the tank; they housed cable management wiring. The presence of two cylinders with chemicals allowed to increase the duration or intensity of spraying. 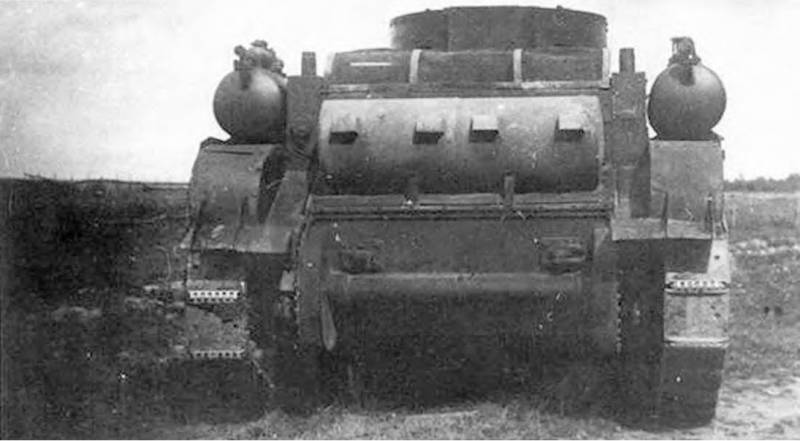 The same car, rear view. Clear placement of smoke appliances
The performance characteristics of the tank after the alteration as a whole have not changed. The installation of two sets with a total mass of more than 300 kg was partially offset by the lack of weapons. By mobility, protection, etc. T-26 with TDP-3 devices was not inferior to similar machines in the basic configuration.

The military tests of the experimental T-26 with two TDP-3 continued until October 1933. Specialists of the Red Army did not recommend this model for adoption. Probably, the capacity of regular cylinders for mixtures was again considered insufficient. In addition, a significant problem was the open placement of cylinders, which, unlike the KhT-18, were not covered by the armor of the carrier tank.

In parallel with the T-26 restructuring project, the installation of chemical equipment on the latest BT-5 wheeled-tracked tank was being worked out. This modification of the machine was called HBT-5. As before, the project was not difficult.

The HBT-5 chemical tank received two TDP-3 smoke devices, newly placed in the stern on the fenders. The kits were open and without reservation. In addition, they were outside the frontal projection of the hull and tower. TDP-3 devices were connected to the fighting compartment of the tank using pipes with control cables. Since the BT-5 used the same chemical equipment as the T-26, the characteristics of contamination or degassing, as well as smoke, remained the same.

During the construction of the experimental HBT-5 tank, the standard cannon weapons were removed from the existing BT-5 machine. In the swinging installation of the tower there was only a DT machine gun. Removing the gun and installing smoke devices led to the preservation of driving performance. 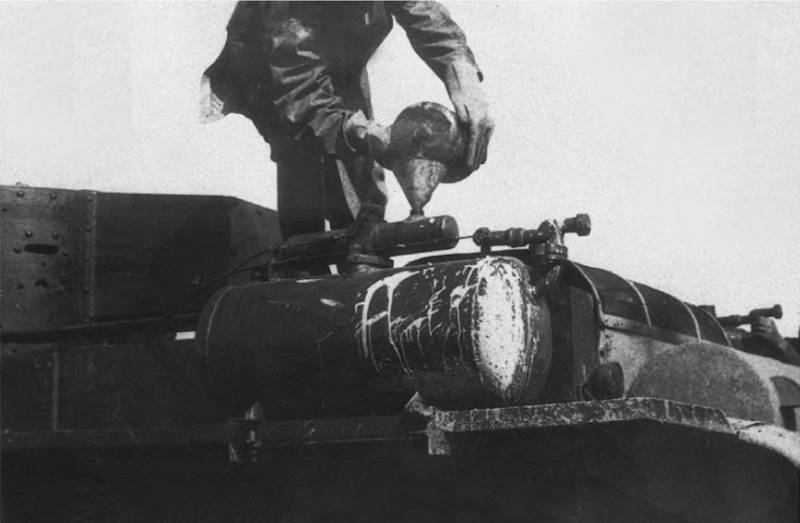 Refueling a smoke device on the HBT-5 tank
In the same 1933, the HBT-5 tank was tested at the KhKUKS NIHP. Due to the platform in the form of BT-5, such a machine was superior to other models in mobility, however, TDP-3 again showed limited capabilities. With all this, HBT-5 was considered suitable for further development with a view to adoption.

In 1936, the original HBT-5 project was slightly revised, after which the serial restructuring of the linear tanks began. Ground forces received a number of TDP-3 products; they had to independently mount them on existing tanks. According to various sources, no more than a few dozen linear BT-5s received such equipment.

Serial HBT-5, rebuilt by military workshops, remained in service until the start of World War II. At the time of the German attack, the Red Army had about 12-13 of these machines. Like chemical armored vehicles of other types, they participated in battles as carriers of cannon-machine gun weapons and did not use chemical equipment.

In the same 1933, the TDP-3 device was experimentally mounted on a T-35 tank, and again the results were far from expected. The already known problems reappeared, limiting the prospects of a new model. At the same time, the carrier tank gave some advantages.

The TDP-3 product and equipment with its use were of limited interest to the Red Army. As a result of testing several chemical tanks, a demand arose to create a new kit with improved characteristics, and soon the industry introduced such a project. A new sample of a tank smoke device was tested on the T-35 and received more interesting results.