Hood. Not a dish, but a uniform 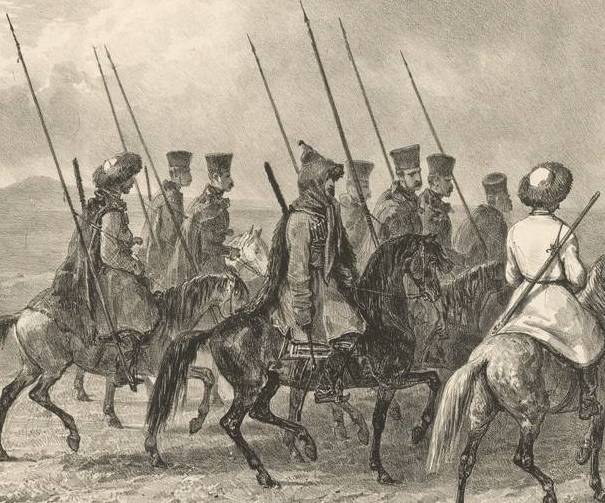 According to the Encyclopedic Dictionary of Brockhaus and Efron, the concept of “head” has Turkish roots and means “head cover in the form of a large cap made of cloth for protection against inclement weather”. According to another version, “bashlyk” does not refer directly to the Turkish language, but rather to Turkic. And this name is a derivative of the word "bash", ie head.

The first mentions of tricks are from the beginning of the 16th century. Thus, the commander, writer and ruler of the Mughal Empire, Zahir ad-din Muhammad Babur, writes about the tradition of giving the headpiece. However, according to the 18th-century authors who traveled around the North Caucasus, rampant fashion for tidbits took place then.

At the same time, Bashlyki gained a strong position among almost all the peoples of the Caucasus. For example, Julius von Klaprot, a German traveler and author of the book “Journey to the Caucasus and Georgia, undertaken in 1807-1808.”, Indicated in his works that Karachai women not only made cloaks for their men, but also made them for sale in Imereti and Abkhazia. The headpiece was widespread among Kabardinians and Circassians. And since the headgear of almost all the mountaineers was considered the most important element of clothing and had a peculiar ritual meaning, the pads got their own rules for wearing. For example, unlike a hat, the headpiece was necessarily removed at the entrance to the house, but it immediately folded neatly and became inviolable to everyone except the owner.

The prevalence of balyshki and a certain fashion for them can be judged at least by Russian literature. The great Mikhail Lermontov wrote in the poem “Hadji Abrek”:

Their clothes were rich,
The cap of their hats covered:
One recognized Bey-Bulat,
No one else recognized.

How they were made and worn

Bashlyk was most often made from homespun cloth from sheep or camel hair (depending on the region). It was sewn from a piece of cloth folded in half, and the seam itself passed behind. The front rounded ends of the head drop down in the form of wide and long blades. However, the cut and finish had, of course, a number of different variations depending on the imagination of the author. There was, for example, a ceremonial and even a mating version of a shawl. If a young man was driving after his bride, he usually wore a richly decorated headpiece with galloons and gold embroidery. And sometimes the bride, in order to show her skills as a skilled housewife, gave her narrowly decorated festive dress-up to her betrothed. 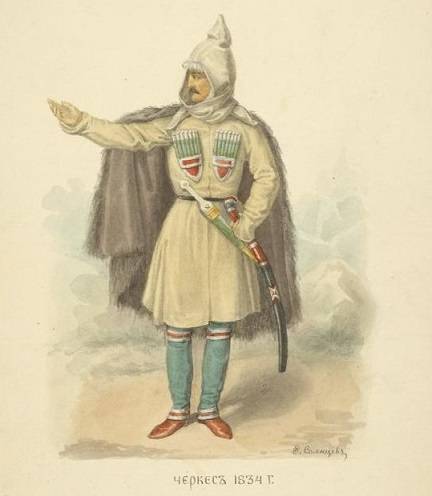 When the cap was put on the hat, the ends were wrapped around the neck, dropping back. In good weather, the head-piece hung on the shoulders, lowered by the hood and blades back. Sometimes the headpiece was worn on the shoulders, crossing the ends on the chest. Most often, this option was worn by the elderly for warmth.

In addition to its direct functionality, i.e. To protect the owner’s head from rain, wind, snow and other inclement weather, heels were used as a kind of scarf. And during the sowing season seeds were poured into it. The shepherds carried lamb and food in the trolleys. The cloaks received a special place from the Abreks. These warlike and dangerous antisocial elements of the mountains of the Caucasus hid their faces with the help of a headpiece during their gang raids.

Pieces of elegant dressing made of white, black, gray and painted red cloth of fine work with galloons, gold embroidery and button-downs (the baron is a patterned woven braid) became gifts to distinguished guests. And some pieces of camel wool of a special Ossetian and Kabardian decoration were presented to the Emperor himself.

Bashlyk in the Imperial Army

Now, probably, few people will remember the phrase of Captain Viktor Myshlaevsky performed by Vladimir Basov in the film “Days of the Turbins”: “But he didn’t understand what was under my shoulder strap ...” And who remembers, it is unlikely to know what it means this word is a headdress, and when this headpiece appeared in the Russian army. And by the way, the Russian troops quickly appreciated the functionality of this Caucasian garment. 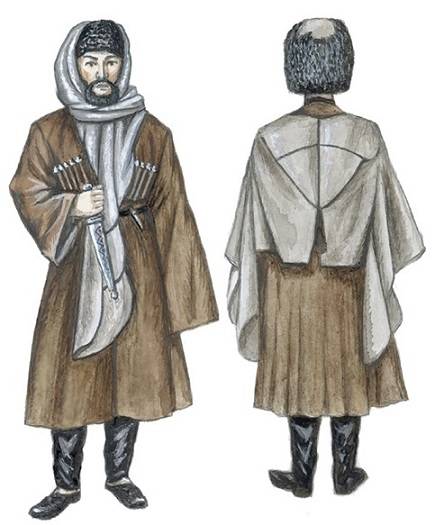 The first who began to adopt the practice of wearing a turban, of course, were the Cossacks. At first, of course, the headgear was worn unofficially, but, given the realities of the Caucasian war, most of the authorities looked at it through their fingers. Most likely, the first Cossack cloaks appeared already at the beginning of the 18th, and perhaps even in the 17th century. Moreover, by the 19th century, their Cossack customs of wearing a tambourine had already developed. So, if the cap is crossed on the chest, then the Cossack follows his official duties. If he is tied on his chest, the Cossack has served military service. If the ends of the head are abandoned behind the back, the Cossack is currently free from service.

But only in 1862, the headdress as a uniform headdress appeared among the Don and Terek Cossacks. Then this headdress for the Russian troops was sewn from camel cloth of yellowish color. However, there were also Caucasian "budget" options made of fleece.

Since 1871, the boshlyki began to enter in other parts of the imperial troops, until they came to the fleet. By 1892, two types of shawls were approved: one officer, the other for lower ranks. At the same time, like everything in the army, the dimensions, style and material were strictly defined. So, for the lower ranks, the cap was sewn from camel cloth. At the same time, the length along the back seam of the hood was 43-44,5 cm, along the front - 32-33 cm, width - up to 50 cm, length of the ends - 122 cm, and their width at the notch was 14-14,5 cm, then gradually decreasing, at the free rounded edges it was 3,3–4,4 cm. The bashlyk was sheathed and turned with thread braid at the edges and along the seams, as well as in a circle in the center of which was the top of the hood. 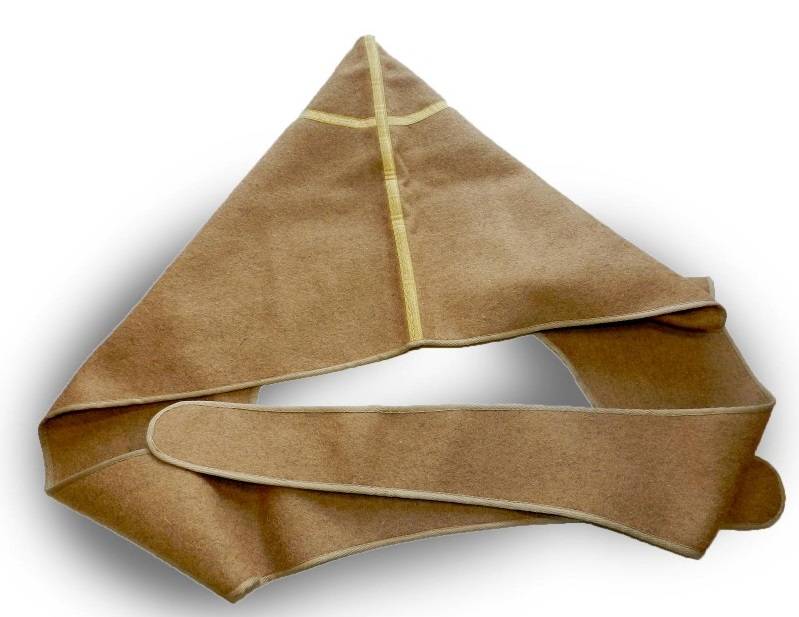 Golden galloon officer headdress
The officer cap was different from the cap of the lower ranks just by the hem. The stitch was not made with ordinary braid, but with a galloon of gold and silver colors. True, the edges were trimmed with garus braid to the main color of the hood.

But this headdress was not static, it developed: it was modernized to the needs of the army. In 1896, a winter lining made of cotton wool or camel hair appeared at the headquarters. This innovation was only beneficial in case of sharp changes in temperature in the mountains and indeed in the harsh climate of the Russian Empire.

The wearing of the headdress in the Russian imperial army was not much different from that of the highlanders. In the stowed position, the head-piece was worn on the shoulders over the overcoat, and the top of the hood was behind. The ends of the blades were skipped under the epaulettes and laid crosswise on the chest. In bad weather or at lower temperatures, a hood was worn over the headgear, and the ends served as a scarf.

Having successfully demonstrated himself as a uniform in the Russian Empire, Bashlyk began his march through European countries. True, according to one version, in Europe this headdress was known before it was officially adopted as a uniform in the Russian troops, since many European countries, from France to Britain, were looking for mutually beneficial “friendship” with the highlanders hostile to Russia. One way or another, but in 1881 the expeditionary detachment of the French troops sent to Tunisia was equipped with towels. It is believed that this decision was influenced by the practice of using the headpiece during the Russian-Turkish war of 1877-78. 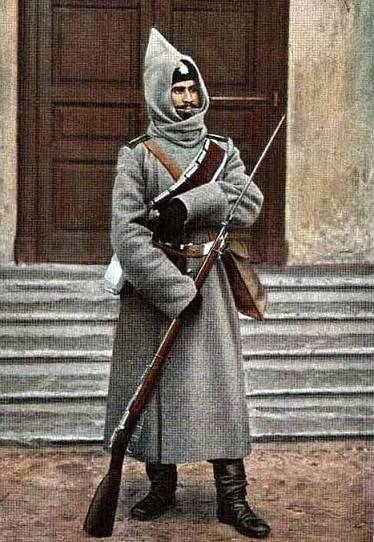 Sometimes military uniforms involuntarily became a trendsetter. Now all this has shifted to an area called "military." That is exactly what happened with the head. The Russian beau monde put on his headpiece to the theater or to the ball. Leo Tolstoy in the novel "Anna Karenina" dresses the main character in an elegant female head with tassels. At the end of the 19th and the beginning of the 20th century, the headgear was worn by high school students and cadets. There were exclusively childish types of bobble heads.

Post-revolutionary reality, it would seem, erased the Cossack traditions and uniforms of the old time forever. But in 1936, the creation of Cossack units began again. Therefore, by order of the People's Commissar of Defense of the USSR No. 67 of April 23, 1936, the cap was introduced as an element of clothing for Soviet Cossacks. The cap for Terek Cossacks was made of light blue fabric, for the Kuban - red, and for the Don - gray-steel color. However, already in 1941 the wearing of the headpiece was again canceled. But there was a service life of this uniform, and therefore in some units the Bashlyks survived the Great Patriotic War. 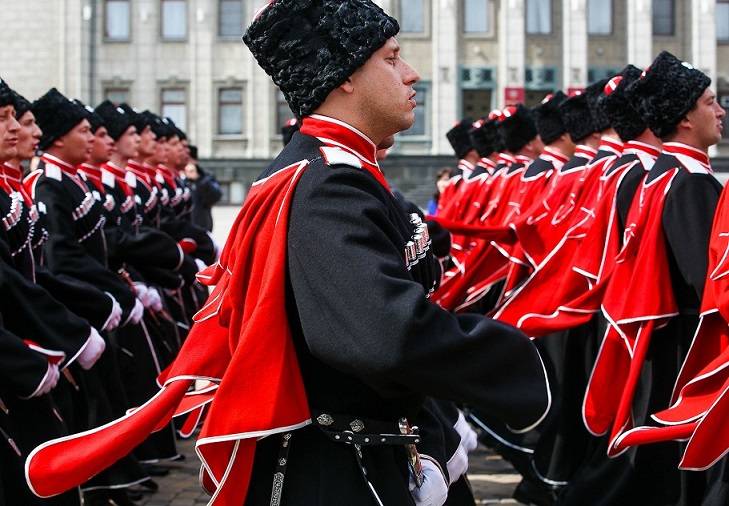 Kuban Cossacks in red trousers at the parade
In the 21st century, of course, the functionality of the headset came to naught. But as part of the traditional costume, it was not only preserved, but was also documented. So, he was enshrined as a Cossack uniform in the decree of the President of the Russian Federation dated February 9, 2010 “On the uniform and insignia on the ranks of members of Cossack societies entered in the state register of Cossack societies in the Russian Federation”.

We are in Yandex Zen
David Nicole on the Mughal Warfare (part of 1)
14 February 1483 was born Babur-Tigr, the great conqueror of India
32 comments
Information
Dear reader, to leave comments on the publication, you must to register.