Lithium batteries: a long journey into the submarine fleet 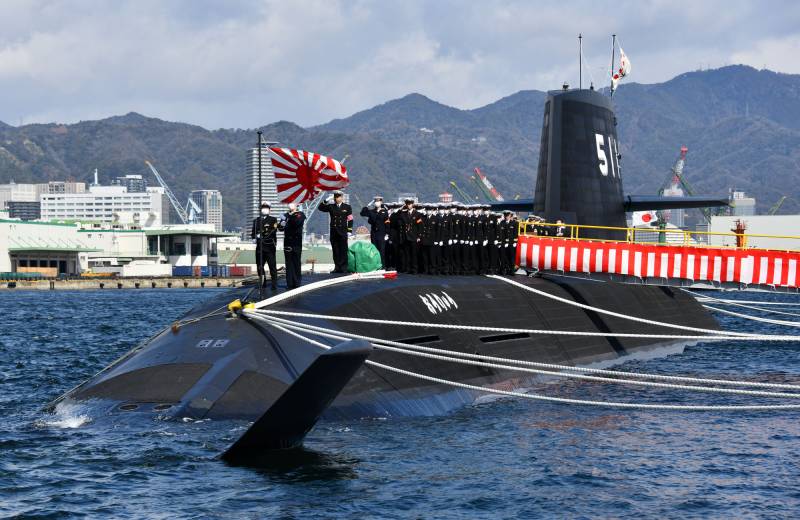 The commissioning of the submarine SS 511 Oryu

On March 5, 2020, in the Japanese city of Kobe, the 11th submarine of the Soryu series was launched. The boat will be part of the naval forces of Japan under the designation SS 511 Oryu. The new Japanese diesel-electric submarine became the first combat submarine in the world to receive lithium-ion batteries, it was also the first such submarine in its series.

According to experts, through the use of new types of batteries that have long been prescribed in smartphones, the Japanese will be able to abandon the use of submarines not only traditional lead-acid batteries, but also non-volatile Stirling engines. It is very curious and iconic for underwater fleet event, since even the non-volatile power plants themselves at one time became a real breakthrough for diesel boats, eliminating the need for submarines to often rise to the surface while sailing. By the way, Russia does not have a single serial submarine equipped with an air-independent power plant.

Launched a new Japanese submarine with lithium-ion batteries has become the 11th boat in the series. In addition, the Japanese fleet has 11 Oyashio-type submarines (including two training boats), which are also difficult to attribute to old models, since the boats were designed in the 1990s, and the last of them was transferred to the fleet in 2008 year. It is already known that in the near future the Japanese fleet will receive another Soryu project submarine (SS 512 boat) with lithium-ion batteries, after which in Japan they will proceed to build a new project submarine, known as 29SS (the first SS 513 boat). In total, the Japanese fleet now has 22 submarines, the oldest of which went into operation in 1998.

The ceremony of putting into operation the Naval Self-Defense Forces of Japan of the first combat submarine with SS 511 Oryu lithium-ion batteries was held in Kobe on March 5, 2020. The ceremony was held at Kobe Shipyard & Machinery Works, owned by a large corporation Mitsubishi Heavy Industries, which in Japan covers a huge number of industrial areas. The new boat was already the 11th in a series of Soryu-type boats, and a total of 12 such ships will be built, of which the last two with lithium-ion batteries. The construction of the SS 511 Oryu boat began in March 2015, the boat was launched on October 4, 2018. 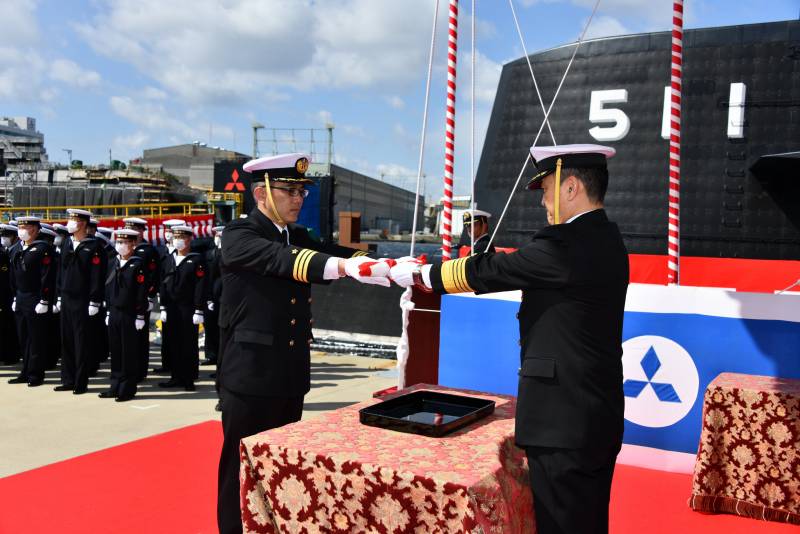 The commissioning of the submarine SS 511 Oryu
It is known that the construction of the 11th boat cost Japanese taxpayers an amount in excess of the cost of any of the ten built boats of the same project. It is reported that the cost of building the SS 511 submarine amounted to 64,4 billion yen (approximately 566 million dollars, according to other sources, the boat cost even more - 66 billion yen). In any case, this is a quarter more than the tenth submarine of the SS 510 Shoryu series (51,7 billion yen or $ 454 million). Almost the entire difference in cost between the tenth and eleventh boats of the series is accounted for by the cost of new lithium-ion batteries, as well as the alteration of the entire accompanying electrical system of the submarine and the change of design.

The twelfth of the planned boats of the Soryu series is to enter the fleet in 2021. The SS-512 boat has already been launched, this happened in November last year. Both boats with lithium-ion batteries in the coming years will become a real testing ground for testing the batteries and their operation in real operating conditions, including in conditions close to combat. The test results are very important, as they will allow the Japanese admirals to adjust the programs for the construction and development of the submarine fleet, as well as to develop the design of the next-generation strike submarines.

It is worth noting that the Japanese fleet has long been hatched plans for the use of lithium-ion batteries in submarines. The appearance of the SS 511 Oryu was the culmination of research and development, which continued for several decades. It is known that the first work in this direction by Japanese designers began back in 1962, and the first lithium-ion battery, designed to be placed on board the submarine, was ready in 1974.

Despite these successes, the first batteries were far from ideal, did not meet the specified requirements for operation, and did not suit the military in many respects. At the same time, such batteries were very expensive for a long time. This was superimposed on a higher danger of such batteries, which were prone to spontaneous combustion and explosions, which on board the submarine is fraught with a real catastrophe. The associated risks and high price, coupled with the still not sufficiently “mature” technology, forced the Japanese admirals to turn their attention to air-independent power plants (VNEU). In 1986, it was decided to develop and build submarines with the VNEU Stirling system, focusing on successful Swedish experience. 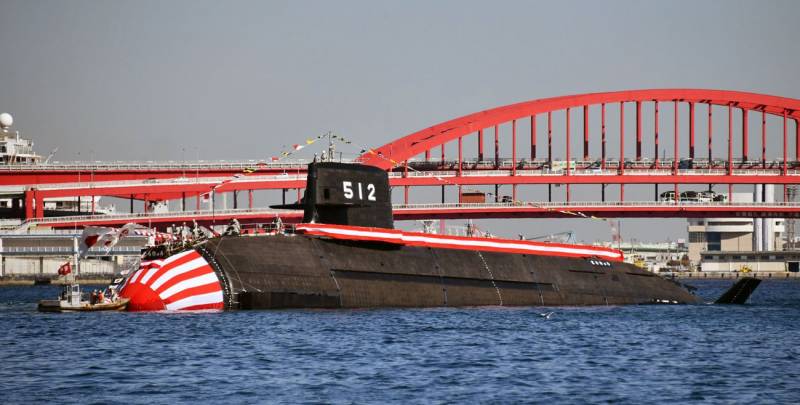 The last serial submarine such as Soryu, will enter the fleet in 2021
Yet the day of lithium-ion batteries aboard the submarines has arrived. New technologies can significantly change the entire submarine fleet. Many experts already attribute such diesel-electric boats to fifth generation submarines. At the same time, in order to switch to the use of new rechargeable batteries, Japanese designers had to substantially redesign the Soryu-type boat project. First of all, new rechargeable batteries required a redesign of the project to maintain stability and ballasting of boats, since the lead-acid batteries installed on the first 10 submarines of the series are significantly heavier than lithium-ion ones. Moreover, part of the weight “left” completely from the new submarines due to the dismantling of Stirling engines.

During the work, the engineers had to completely revise the entire power system on board the SS 511 Oryu. Also on the submarine installed more powerful diesel generators designed to recharge batteries. In addition, the designers had to tackle snorkel remodeling, this is necessary to increase the volume of air supply and at the same time exhaust exhaust, since the charging speed of lithium-ion batteries is much higher than standard lead-acid ones.

Already today, lithium-ion batteries provide submarines with a duration of underwater running comparable to boats using VNEU. And in the future, the technical characteristics of such boats will only grow. At the same time, the high capacity of the batteries allows submarines to move under water for a long time at high speed - about 20 knots. High duration of underwater travel at high speed is a very important indicator for submarines. This can help when attacking a surface target and when evading enemy attacks. The faster the boat leaves the danger area, the better.

At the same time, unlike submarines equipped with VNEU, the new submarine is able to constantly replenish the energy reserve in lithium-ion batteries, using battery recharging using a device to operate the engine under the water of the RPD. Also, the advantages of lithium-ion batteries include a longer service life. Such batteries do not require maintenance, and the electrical systems built with their help are easier to manage and design. Also, lithium-ion batteries differ from lead-acid batteries in a shorter charging time due to the greater current strength, which is very important for divers. 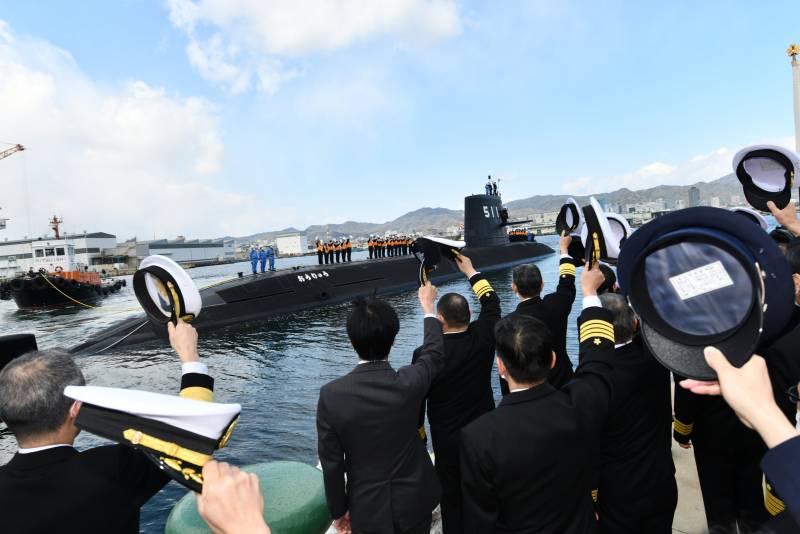 The commissioning of the submarine SS 511 Oryu

Submarine capabilities of the Soryu type

Soryu-type submarines with a standard surface displacement of 2900 tons and underwater - 4200 tons are being built in Japan since 2005 (the first boat of the series was laid). The length of the Soryu submarines is 84 meters, the width is 9,1 meters, and the average draft is 8,5 meters. The crew of the boat consists of 65 submariners (including 9 officers).

The first ten diesel-electric submarines built under this project were distinguished by a combined power plant consisting of two Kawasaki 12V25 / 25SB diesel-electric units with a capacity of 3900 hp each and four Kawasaki Kockums V4-275R Stirling engines developing a maximum power of 8000 l .c (underwater course). The power plant of the ship operates on one propeller shaft. The maximum surface speed of the boat is 13 knots (approximately 24 km / h), the maximum speed of underwater speed is 20 knots (approximately 37 km / h). 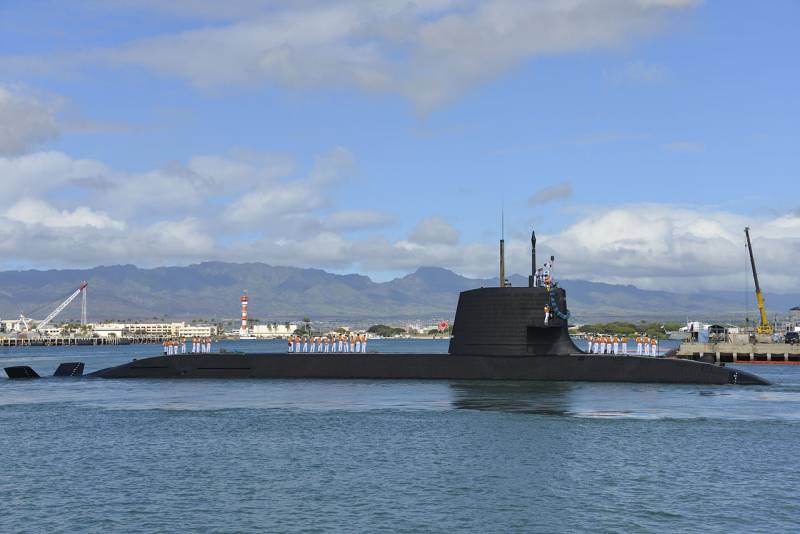 Soryu submarine
The working depth of the submersibles of the Soryu type is 275-300 meters. Autonomy of swimming - up to 45 days. For boats of this project equipped with a non-volatile power plant, the cruising range is estimated at 6100 nautical miles (approximately 11 km) at a speed of 300 knots (approximately 6,5 km / h). It is reported that new submarines receiving lithium-ion batteries will be able to stay in the submerged position even longer, in fact, their capabilities will be limited only by the supply of provisions and fresh water on board.

The main armament of Soryu-type boats is anti-ship torpedoes and missiles. The submarine has six 533-mm torpedo tubes HU-606. The ammunition of the boat can consist of 30 torpedoes "Type 89". Modern torpedoes develop a maximum speed of 55 knots (102 km / h), at which speed a torpedo can go under water for 39 km. Also, these torpedo tubes can be used to launch UGM-84 Harpoon anti-ship missiles. Modern versions of such missiles can hit targets at a distance of up to 280 kilometers.

We are in Yandex Zen
Japanese "Dragon-phoenix" will not be reborn from the ashes
Submarine "Lamprey"
108 comments
Information
Dear reader, to leave comments on the publication, you must to register.