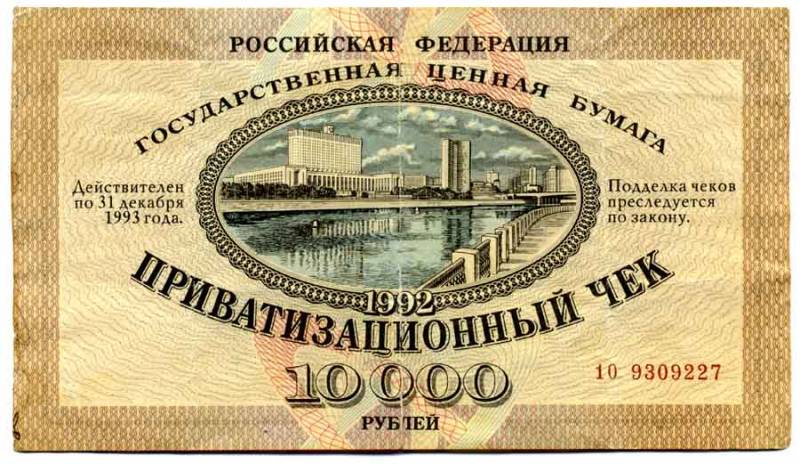 The recent decision of the Hague Court of Appeal, which again insisted on paying the shareholders of the scandalous Yukos company enormous amounts of compensation for violation of their rights by the Russian authorities (supposedly), gives rise to certain doubts. However, they do not appear regarding the legality of decisions of domestic law enforcement and judicial authorities regarding those who brazenly robbed the country through front-line offshore companies, but was it worth it to limit the “analysis” of the results of more than ambiguous privatization of the 90s by Yukos alone?


According to thematic sociological surveys, 80-90% of Russians consider the privatization unjust and illegitimate. No wonder the people dubbed it "privatization." However, no one hid that this is not about honesty. Anatoly Chubais, the “father,” the mastermind and organizer of privatization in the country, subsequently honestly admitted that the goal was not so much building capitalism as preventing the Communists from returning to power in the 1996 elections, which would lead to a halt in the work of the reformer team in the country's collapse. “The choice was between gangster capitalism and gangster communism, so we chose ...” These are his own words. You can’t tell more honestly ...

The industrial and mining giants sold for mere pennies, what was it? "Creating conditions for entrepreneurship" or is it still wrecking, outright robbery? The vast majority of these and other objects went into private hands at prices that did not closely match their real value. About potential - and nothing to say. Amounts are openly announced today: the state budget received 2 trillion rubles (about $ 60 billion) from this whistle. The cost of being put under the hammer of the state and public property was underestimated dozens of times. As a result, the treasury missed 1,5 trillion in relying on privatization. dollars. This is not to mention the fact that the country's industrial and economic potential was dropped to the level of the 60s.

"Voucher privatization" was the original deception of the population. Everything was built in such a way that all the “certificates” generated by it, using which yesterday’s Soviet citizens had to “take and share” (and to be honest) everything that they and their fathers and grandfathers had created and defended for decades, naturally turned into a pile of empty pieces of paper. Well, as for the so-called collateral auctions, as a result of which the most expensive and attractive objects of state property have sailed to the dexterous dealers, there is no need to guess. Everything was played out as if on notes - commercial banks credited the government on the security of the same Lukoil, Norilsk Nickel or Yukos. It wasn’t just a loan, but a veiled sale at extremely low prices - nobody was going to give “debts”, the amounts for this were not even laid down in the state budget.

Today, the market value of pennies for enterprises and companies has grown by orders of magnitude. For example, Norilsk Nickel, bought for $ 170 million, is now worth 13 billion in the same currency. There is a price increase of 76 times! What to do about it? Incidentally, the "Yukos affair" sets an excellent precedent. Isn’t it time to admit not only what has been going on around this particular company for many years, but also the entire privatization of the 90s? Declare illegal at least collateral auctions, review the results of at least the most egregious deals, during which the state and people were deceived in a completely unimaginable way?

It is unlikely that anyone in the Kremlin will go to the complete abolition of “privatization” - by its results this decision will be tantamount to a new 1917 year. It is unlikely that they even dare to demand payment from their new owners for their property not at an understated price, but at a real price at the time of purchase. Nevertheless, from a legal, political, and even purely moral point of view, this would be more than justified. Not to mention how Russia's budget would have been replenished.

We are in Yandex Zen
Results of the week. "And you do not confuse your personal wool with the state!"
Situational analysis of the death of the MH17 flight (Malaysian Boeing 777), made on the basis of engineering analysis from 15.08.2014
137 comments
Information
Dear reader, to leave comments on the publication, you must to register.