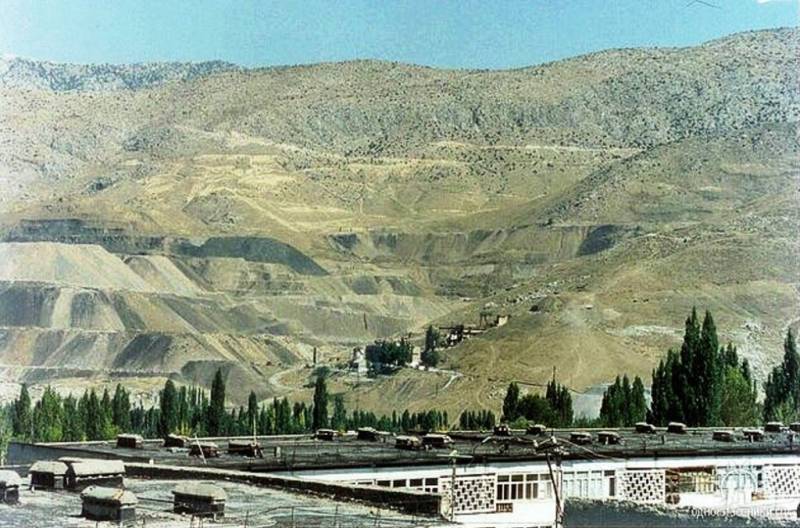 Khaidarkan is a picturesque place. In the photo - dumps and processing plant of a mercury plant

Sometimes when discussing ammunition, in particular, cartridges, one can come across the assertion that the lead azide used in capsules is such a more powerful and modern initiating explosive as compared to mercury fulminate, more commonly known as explosive mercury. Usually this is presented as a truth beyond doubt.

In addition, lead azide, obtained in the form of needle-like crystals, has much lower flowability and compressibility than explosive mercury powder, and this is important for the accurate composition of the mixture for the capsule charge. However, 0,36 grams of detonating mercury is required to initiate TNT, and 0,09 grams are required for lead azide. These substances have their own advantages and disadvantages.

The reason for the replacement was clearly different and rooted in military-economic considerations. It is difficult to obtain mercury, and it can not be obtained everywhere, while lead is extracted in volumes of thousands and even tens of thousands of tons. Making lead azide is easier.

The emergence and use of lead azide

Lead azide, as you might guess, appeared in Germany. It was first received in 1891 by the German chemist Theodor Curtius. The military quickly drew attention to this discovery, and already in 1907 the first initiating charge with lead azide was patented in Germany. In 1910, the Rhine-Westphalian Joint-Stock Company of Explosives patented a mixture of lead azide, nitrogen sulphide and diazolbenzene nitrate for detonator caps.

Work on lead azide has also been carried out in France, the United States, Russia and other countries. By the way, in Russia, lead azide was studied, but it did not go into widespread use, because there was a lot of mercury in Russia. Its production began in the XVIII century in Transbaikalia. In 1879, the Nikitovskoye deposit was discovered in Ukraine, the production of metallic mercury began in 1887. From 1887 to 1913, about 6762 tons of mercury were extracted, of which 5145 tons were exported, which gives an average annual production of 260 tons and exports of 197 tons. In addition, there was also imports of cinnabar and mercury, in 1913 56 tons of cinnabar and 168 tons of mercury. This was a curious farm, of import and export; most likely, primary mercury was refined abroad. In general, there was enough raw material for the production of explosive mercury, and there was no particular need for lead azide.

In Germany, the situation was the opposite. Germany’s own resources were small and, at best, produced 4-5 tons of mercury per year. Germany imported 1913 tons of mercury in 961, mainly from Italy, buying up almost all of its Italian production. With the outbreak of World War I and the transition of Italy to the Entente camp, this source fell away. But a lot of mercury was from an ally - Austria-Hungary, which had the second largest cinnabar mine in the world, in Idria, in Slovenia. It was one of the most important enterprises in the empire. However, the fighting between the Austrian and Italian armies put this source in serious jeopardy. In the summer of 1917, the Italian army approached a distance of only about 12 miles to Idria. This circumstance forced the German command to quickly help the Austrian army in organizing the offensive, during which the Italians were driven back

Due to the possibility of mercury loss in Germany, lead azide was produced and put into use even during the First World War. Although it cannot be said that everywhere and everywhere the replacement of explosive mercury with lead azide was good. For example, in shells for anti-aircraft guns, lead azide led to frequent explosions in the barrel. In March 1918, on the Western Front, 43% of anti-aircraft guns were disabled by shell explosions in the barrel. The reason was that lead azide manufacturing technology was changed, and it became so sensitive to shock that it exploded when fired. The Germans were forced to replace the entire stock of shells for anti-aircraft guns.

After the war ended, when the world mercury market collapsed, production decreased to 2100 tons in 1923 (in 1913 there were 4000 tons), lead azide began to seize positions. Coal mines needed detonators now, and cheaper for mining. The Rhine-Westphalian Society established a very large production of this substance. One factory in Troisdorf until 1932 produced 750 tons of lead azide.

During World War II, Germany did not pay much attention to lead azide, because by the beginning of the war Germany had the largest mercury producers: Spain and Italy. Especially Italy, which was in dire need of German equipment and German coal. In 1938, Italy produced 3300 tons of mercury, which would be enough for all imaginable needs. By the way, the former Austrian mercury mine ended up in the Slovenian region occupied by the Italians and included in the Venice-Giulia region of Italy.

As far as one can judge, lead azide played a slightly different role in the warfare of Nazi Germany. Its use, especially in a mixture with lead trinitroresorcinate, allowed to save the consumption of scarce copper on the production of fuses. Lead azide with copper forms a very unstable and prone to spontaneous explosion of copper azide, so the fuses were made of aluminum. Rattlesnake, on the other hand, requires a copper tube, since it forms an amalgam with aluminum. On a production scale of tens and hundreds of millions of pieces of ammunition, replacing copper with aluminum yielded very tangible savings.

What does losing mercury mean?

October 29, 1941 a catastrophe happened - the Germans captured Gorlovka in Ukraine. Next to it was Nikitovka, where there was the only mercury mining and smelting plant in the USSR. In 1940, it produced 361 tons of mercury, and in January-September 1941 - 372 tons. The plant was technically advanced (even Germans noted), processed ore with a very low mercury content. True, he did not cover all the country's needs for mercury, which reached 750-800 tons, and before the war the USSR purchased mercury abroad, primarily in Italy. 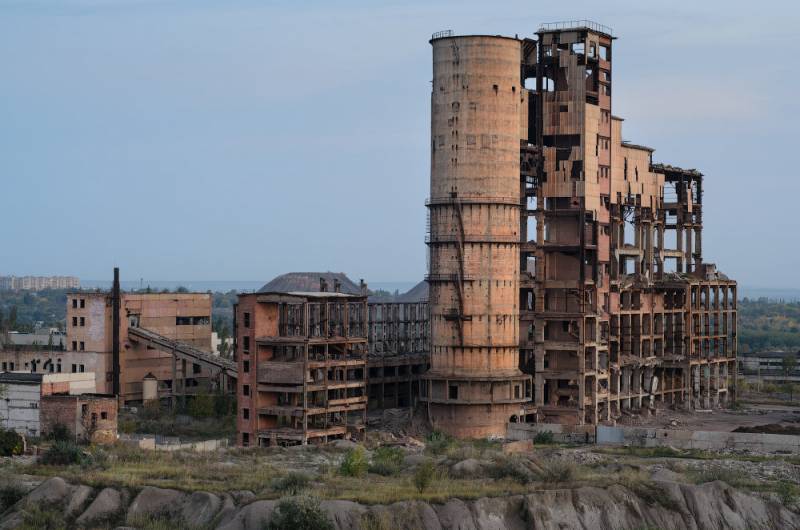 Once again, the Nikitovsky Mercury Plant underwent military ruin. In the photo the remains of the production complex; now these ruins are already demolished
Now all the sources have disappeared. Meanwhile, according to the Glavredmet of the People’s Commissariat of Non-Ferrous Metallurgy of the USSR, consumption in the 4th quarter of 1941 for military commissariats was 70 tons (including the Commissariat of ammunition - 30 tons), and for civilian commissariats - 69 tons (RGAE, f. 7794, op. 5, d. 230, l. 36). The annual estimated consumption in the production of ammunition alone was 120 tons; total military consumption per year - 280 tons, total - 556 tons.

Of course, all possible mercury was sent to the military industry, right up to the seizure of mercury in laboratories and civilian enterprises. They were selected for mercury switches and for gold mining by amalgamation.

The equipment and workers of the Nikitovsky Mercury Plant were hastily transferred to Kyrgyzstan, to the Khaidarkan mining field, which had been explored in the early 1930s. This is a huge deposit of fluorspar mixed with mercury and antimony. There, the new mercury plant was built at an accelerated pace, based on the already existing pilot production. In 1941, Khaidarkan gave 11,6 tons of mercury, and the plan for 1942 was set to 300 tons. So much, of course, the new plant did not melt. Even in 1945, smelting of mercury amounted to 193,7 tons. But nevertheless, Khaidarkan's mercury allowed to survive in 1942-1943, during the most difficult period. And there the allies already helped (Lend-Lease delivered 1 tons of mercury before January 1945, 818,6), and on September 5, 1943 Gorlovka was liberated, and experts from the USSR People's Commissariat for Non-Ferrous Metallurgy rushed to Nikitovka.

The data on mercury production was a very interesting archival find, which allows us to say that the acute shortage of ammunition, especially artillery shells, which was noted from the end of 1941 and approximately in the spring of 1943, was associated not only and not so much with the relocation of industry as with acute lack of raw materials for the production of explosive mercury.

Under these conditions, lead azide, of course, was to be used as a substitute for explosive mercury. Only information about this has to be obtained approximately like gold in the Kolyma, in placers of information. For example, there is evidence that the factory number 5 named. I.I. Lepse in Leningrad (also known as the Okhta Shipyard) used to have shell production for naval artillery, and with it there was a lead azide production workshop. Because this workshop was closed in connection with the allocation of shell production in a separate plant. In September 1941, part of the plant was evacuated, but in connection with the expansion of the production of weapons and ammunition in Leningrad, the former workshop was remembered and restored.

Apparently, the Soviet leadership learned a lesson from the epic of the loss of the Nikitov mercury plant and after the war paid the most serious attention to the mercury industry: it went up. The extraction of primary mercury in the USSR in the early 1980s amounted to about 1900-2200 tons per year, and in 1966 a special decree was issued obliging enterprises to send all mercury-containing waste to the Nikitovsk Combine for processing. The plant received secondary mercury of about 400 tons per year. Domestic mercury consumption in the 1980s ranged from 1000 to 1250 tons per year (even 1985 tons in 1307), exports ranged from 300-450 tons per year, and the remainder was stockpiled.

About 20% of domestic consumption went to military needs, including for the production of explosive mercury, that is, from 200 to 250 tons per year. And about 500-600 tons of mercury per year was stored in the reserve, apparently also for military needs, in case of a major war. In principle, 1000-1500 tons of mercury in a warehouse could meet the requirements for the production of ammunition for two or three years of war.

Lead azide is a substitute for explosive mercury in the absence of it. The current prevalence of lead azide is due to the fact that mercury production has declined sharply. In the 1970s, the global primary mercury market was about 10 thousand tons per year, now production has decreased to about 3 thousand tons per year. This is significant because a significant part of the mercury is consumed irrevocably. At the same time, the Minamata Convention on Mercury was signed in October 2013, which aims to sharply reduce the use of mercury and prohibits the production of mercury switches, lamps, thermometers and pressure measuring instruments since 2020.

With the drop in mercury production, the sale of stocks (Russia also sold its stocks of mercury in the 1990s) and the prospects for an even greater drop in mercury production, of course, the spread of lead azide is not surprising. If the UN decided to strangle the global mercury industry, then something must be fought for democracy or against it, and explosive mercury will replace lead azide.

We are in Yandex Zen
Is the old well forgotten to become the new? Part-2. By call of honor and duty
An-12 in Afghanistan
25 comments
Information
Dear reader, to leave comments on the publication, you must to register.