In India, they announced a change in the strategy of a possible war on two fronts - with China and Pakistan 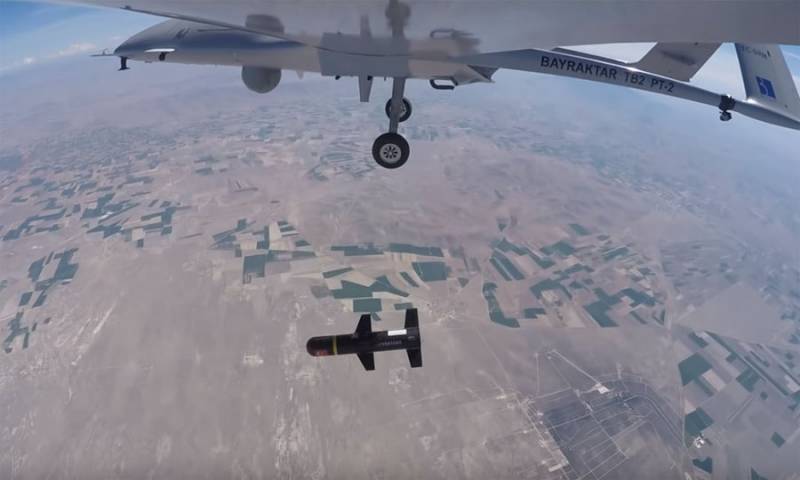 The Eurasian Times has published columnist Nitin Tiku reporting India’s decision to change its strategy for waging a possible war on two fronts - against Pakistan and China. In the article, the author refers to Major General of the Indian Army M. Naravane, who announced the change in the general concept and military strategy for such a confrontation.

Keeping in mind the impending threats, the Indian army initiated the process of acquiring at least 100 portable drones, which will play a decisive role in the destruction of enemy targets near the border. The Loiter drone system should provide guaranteed use in Indian terrain and climatic conditions. There must be warheads to destroy manpower and lightly armored targets.
We are talking about the so-called "wandering" ammunition or kamikaze drones.

It is proposed to take into account the Turkish experience of using drones in Syria. At the same time, there was previously no evidence that the Turks in Idlib used kamikaze UAVs.

From the material of Nitin Chiku:

Such drones are much more profitable to acquire and operate than fighter jets or American attack drones. Two Turkish UAV systems, Bayraktar-TB and Anka-S, are successfully operating in Syria. Bayraktar has also been widely used in the civil war in Libya, where Turkey also intervenes and proves its skills with drone technology. There are currently no signs of a deal between Turkey and Pakistan, but experts predict that Bayraktar could be a potential prospect for Pakistan.
The material reports that China is building up a drone fleet, which also equips Pakistan with various types of UAVs.

We are in Yandex Zen
Israeli company Elbit Systems presented the kamikaze drone
Reports from the militia of New Russia for 27-28 September 2014 of the year
48 comments
Information
Dear reader, to leave comments on the publication, you must to register.