Germany stocked in cash: Europeans are preparing for the crisis 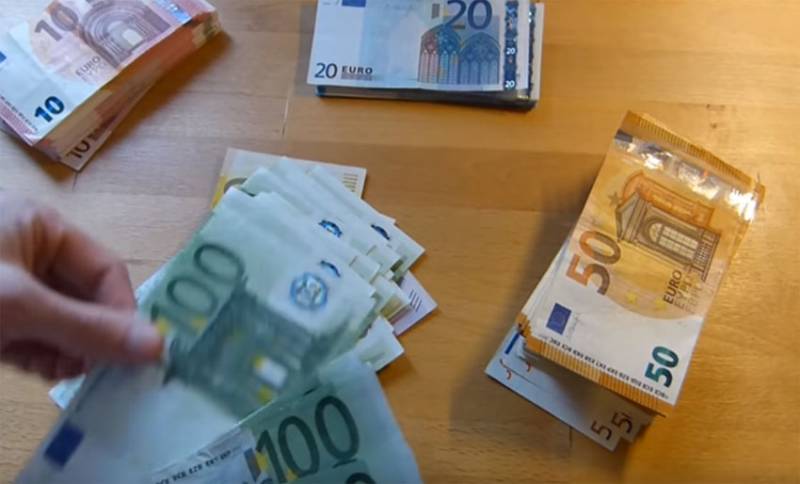 Recent turmoil in global currency and stock markets has led experts to talk about an impending economic crisis. Meanwhile, there is an opinion that the world has not completely overcome the consequences of the financial crisis of 2008-2009. He still makes itself felt.

On Thursday, the Governing Council of the European Central Bank (ECB) decided to maintain the base interest rate at 0% per annum. On deposits, they left a negative rate at –0,5%. Another important part of the ECB press release was the announcement of an increase in the quantitative easing program by € 120 billion by the end of the year.

Behind this crafty term lies the banal emission of Eurocurrency. During the days of the financial crisis, the ECB actively used it, pouring money on the fire of the crisis. This was done not by a direct injection of unsecured money into the economy, but through the purchase of debt obligations of governments and central banks of the eurozone countries.

The ECB continued this practice in subsequent years. So for the period from 2015 to 2018, the bank poured into the European economy over 2,6 trillion euros. It was expected that these funds will revive her. However, the effect of the action was minimal. When this became clear, the ECB stopped its printing press, but kept the discount rate at 0%, and the deposit rate in the negative zone.

The ECB introduced a negative rate on deposits back in 2014. The logic of his actions was to save money became unprofitable, because the owners of free funds will spend it on consumption or investment. This was to revive the stagnant European economy.

Now, over the years, it is clear - the bankers miscalculated. People simply switched to cash and began to store them at home, as was always the case in times of crisis for the economy. It is curious that while Russia is introducing its own payment system and encouraging cashless payments, Europe does not part with cash.

In 2017, the ECB calculated the average amount of money in wallets from citizens of European countries. Each resident of Germany turned out to be 103 euros, followed by the citizens of Luxembourg and Austria - 102 and 89 euros, respectively. The French are accustomed to keep around 32 euros, while the Portuguese - only 29 euros. On average, Europeans carry 65 euros in their wallet.

It turned out another interesting detail. In everyday calculations, the Germans prefer to use cash. Long-term observations of the Bundesbank show that cash payments make up about 80 percent of Germany’s retail turnover, and this figure has hardly changed over the years.

The European Bank has tried to influence this trend. Back in 2014, he stopped printing the largest banknote of 500 euros, and then completely removed it from circulation. The ECB attributed this step to the fight against corruption. In fact, reducing the face value of settlements, the bank impeded the circulation and storage of cash.

It is estimated that a billion euros in banknotes of 500 euros pulls 2,24 tons. And the weight of the same amount in banknotes of 50 euros exceeds 18 tons. Naturally, this difference makes cash collection and storage difficult. So over time, the problem has acquired a scale, measured not in wallets, but in tons of bank vaults. Recently, the media reported that cash storages in Germany were overflowed, there was no longer enough storage space for cash.

According to the Bundesbank, by the beginning of 2020, the total cash reserves in the credit institutions of Germany reached a record 43,4 billion euros - tripled over the past five years. And this is not the whole available resource of Germany. Many Germans began to keep money at home. Now manufacturers of safes work in all blades. For example, the largest of them, Burg-Waechter, increased its sales by a quarter, and demand continues to grow.

Experts see two reasons here. First of all, the fact that Germany is the largest economy in the European Union, the people in it are prosperous and have free means. The second reason lies in the thrift of the Germans. The pace of their savings is about 10 percent of income - twice as high as the Eurozone average. Now they are made in the form of cash.

Have this stories There is another aspect. I remember that on the eve of the 2008-2009 crisis, the famous Russian billionaire Mikhail Prokhorov sold his assets and went into the cache, as economists call cash on their slang.

From this operation, Prokhorov against the background of colleagues who lost their fortune due to a drop in the value of assets, then he won a lot and rose sharply in the Forbes rating. It is possible that the Germans also live in anticipation of the crisis. In vain did their companies and ordinary people, instead of investing in production, drag money into bank vaults!

This made it hot for banks: credit processes slowed down, and the lack of storage space became a headache. And then the ECB turned on its printing press again. However, experts doubt that this measure will save Europe from the impending crisis.

We are in Yandex Zen
"Glazyevtsy" against "Kudrintsev": the battle for the right to manage the budget
Russia is taken to the Golden Billion
105 comments
Information
Dear reader, to leave comments on the publication, you must to register.