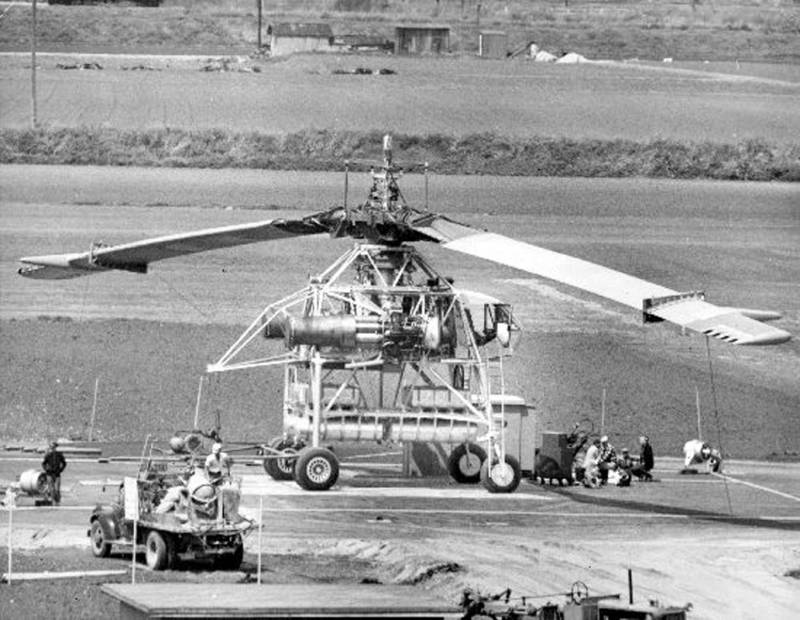 In 1952, the first flight of the experimental transport helicopter XH-17 Flying Crane developed by Hughes Aircraft took place in the United States. During the tests, this machine showed a unique carrying capacity for its time, but at the same time had a lot of serious drawbacks. As a result, “Flying Crane” did not go into the series - although it served as the basis for a new project.

Wishes of the military

History Project XH-17 dates back to the mid-forties and was initially written without the participation of Howard Hughes. By that time, the US Department of Defense had studied the available helicopters and understood all the prospects for this area. Already on January 31, 1946, a tactical and technical task for a promising transport vehicle appeared. By the standards of the time, it was a “heavy” helicopter. 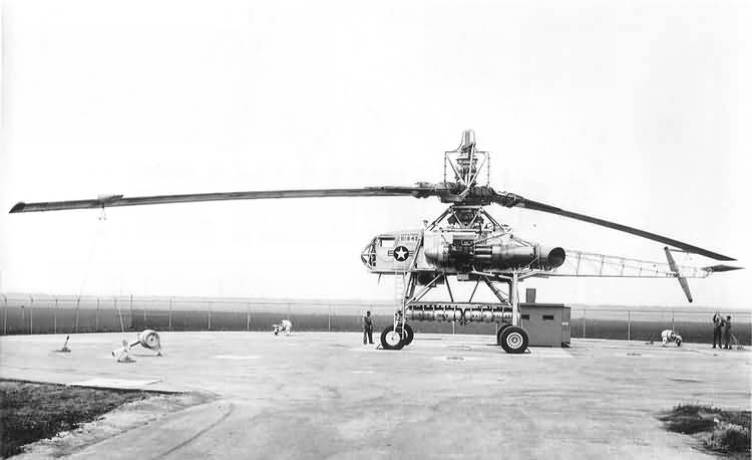 Helicopter stand soon after the rebuild. Photo US Air Force
The military wanted a helicopter capable of transporting 2,44 x 2,44 x 6,1 m cargo weighing 10 thousand pounds. He had to fly at a speed of up to 105 km / h, climb to a height of at least 900 m and have a tactical radius of 160 km, provided that he was 30 minutes at the maximum distance from the base. The design should have been collapsible - for the transfer of equipment by land transport.

Scientific organizations from the US Air Force conducted research and clarified requirements. It turned out that the current level of technology and adopted solutions do not allow creating a helicopter with the required characteristics. The search began for alternative designs with the desired potential. One of them was proposed by a German specialist, Friedrich von Doblhof. He came up with the concept of a rotor-propelled helicopter. According to this idea, the engine in the fuselage was supposed to supply compressed air to the nozzles on the blades responsible for the rotation of the screw. 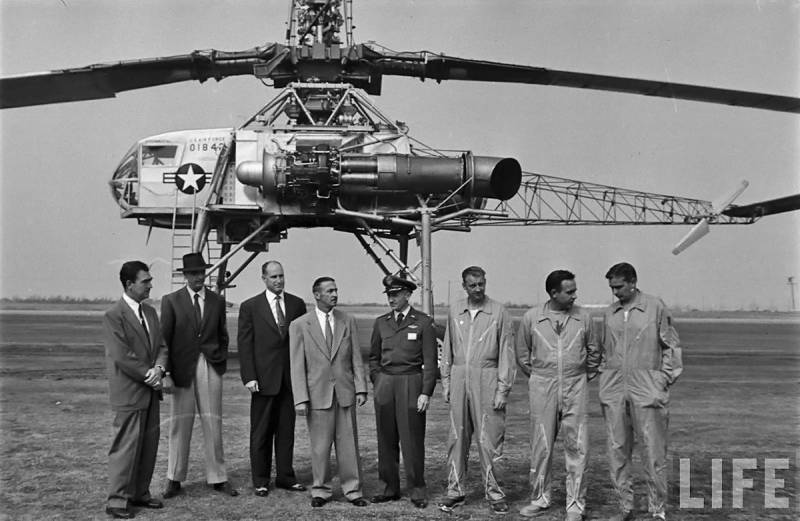 Several aircraft manufacturing companies took up work at once. By order of the Ministry of Defense, they worked out the issue of creating a ground-based stand simulating helicopter assemblies of unusual architecture. On May 2, 1946, the Kellett Autogiro Corporation from Pennsylvania won the competition for the development of a pilot system. She should have completed the research and design, which was given for a year.

New calculations showed the complexity of the task. So, it turned out that none of the available jet engines will not allow you to create sufficient thrust on the nozzles and provide the desired rotor speed. In this regard, it was necessary to develop a larger diameter screw with the required load-bearing characteristics. In addition, the power plant was forced to supplement the second engine. 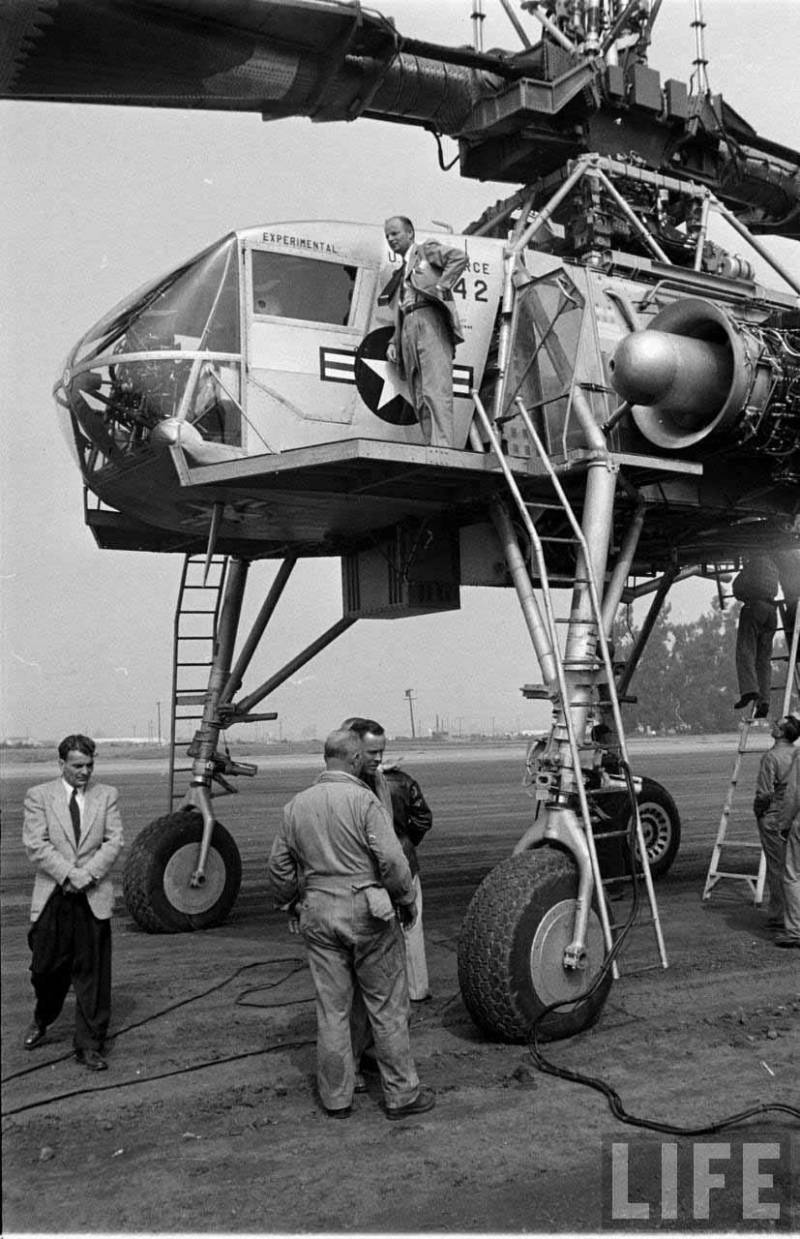 Preparing for the flight. LIFE Photos
On August 27, 1947, they signed a contract for the construction of a ground stand. This document also stipulated the future restructuring of the stand units into a full-fledged experimental helicopter - it was assigned the working designation XR-17 (a new one will be introduced later - XH-17). In a few months, Kellett completed part of the construction work, but then the situation changed.

Kellett was faced with financial difficulties, and in 1948 the project had to be sold. The buyer was Hughes Aircraft. She paid $ 250 (about $ 2,75 million at current prices), for which she received all the project documentation and an unfinished booth. In addition, G. Hughes lured all the responsible project participants into his company. The US Air Force did not object to this, since the most important project passed into the hands of a long-known and reliable contractor.

Units and documents were transferred to the Hughes Aircraft site in California, and then completed construction. By this time, the stand was actually a full-fledged helicopter, which so far was not going to be lifted into the air. Nevertheless, he already had almost all the components and assemblies necessary for this. 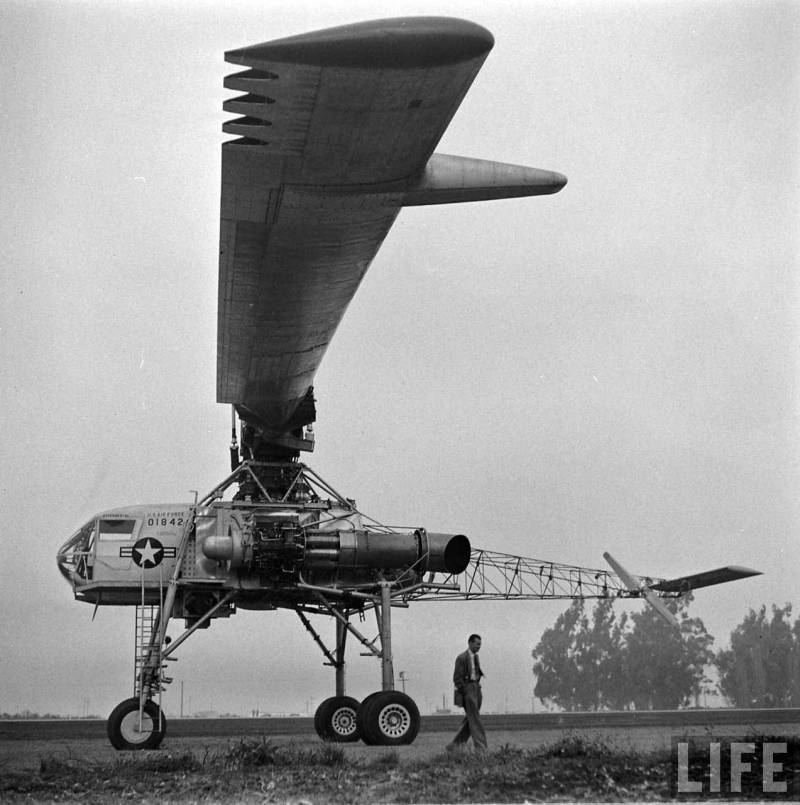 Spectacular view. You can consider the design of the blades. LIFE Photo / oldmachinepress.com
The basis of the helicopter stand was a welded frame of a characteristic appearance. It was distinguished by high landing gear, a massive base under the screw hub and a long tail boom. To save most of the units borrowed from serial technology. So, the cabin was taken from the Waco CG-15 glider. Behind her, a 2400-liter fuel tank from the B-29 bomber was installed. The landing gear wheels were borrowed from the B-25 and C-54 aircraft.

On the sides of the helicopter fixed engines General Electric 7E-TG-180-XR-17A, made on the basis of the serial GE J35. Engine compressors had a compressed air extraction system. Through pipelines, it was fed into the rotor hub, and then through a complex system of pipes and movable joints into the blades. Also in the sleeve there were connections for transferring fuel to the blades.

Two rotor blades were built on the basis of a tubular spar providing air supply to the tips. In the end part of the blade there were four combustion chambers where air and fuel were supplied. The thrust from the cameras was supposed to provide rotation of the screw. Due to the large size and mass of the blades, it was necessary to develop a special screw hub with appropriate fastening means and a reinforced automatic swash plate. 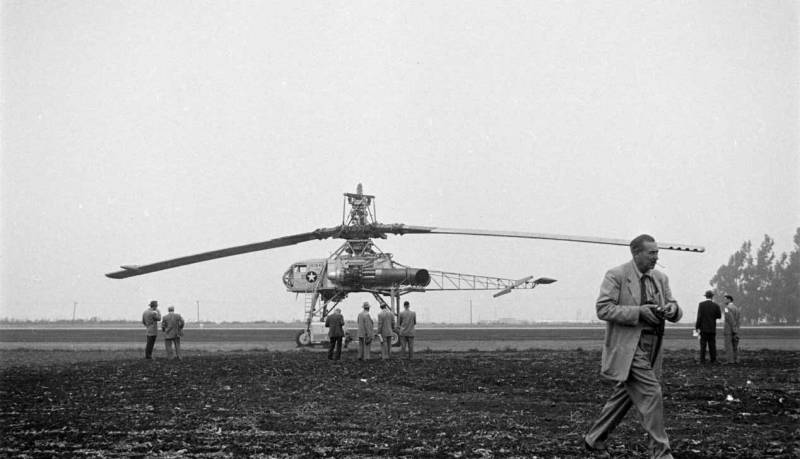 Preflight preparation. Photo US Air Force
The main rotor of a record diameter of 39,62 m was supposed to rotate at a speed of 88 rpm. - slower than other helicopters of that time. The total power of the power plant reached 3480 hp, which ensured that the basic requirements of the customer for carrying capacity were exceeded.

On the ground and in the air

On December 22, 1949, Hughes specialists completed the first launch of the XH-17 booth. The mechanisms confirmed their efficiency, but could not do without "childhood diseases." Correction of the identified shortcomings took several weeks. After that, full-scale ground tests began. 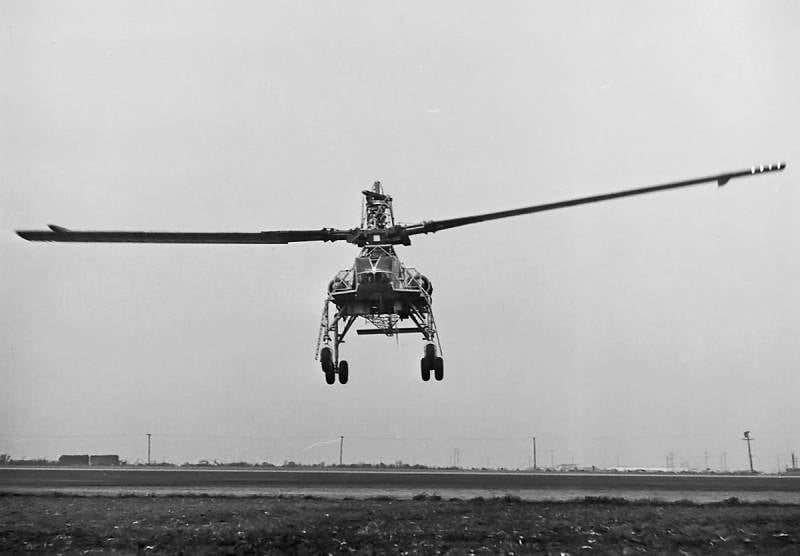 XH-17 in flight. On the right, fuel combustion is observed in the blade chamber. Photo US Air Force
In June 1950, during another test, a serious breakdown of the swashplate occurred. The stand was in need of complex repair, but the customer was not worried and was optimistic. The development companies were recommended to repair the stand, rework some units - and raise the helicopter into the air. However, this time the list of necessary improvements turned out to be quite long.

Most of the units underwent some modifications. In addition, a completely new hydraulic control system was developed for the helicopter. A tail rotor taken from an H-19 helicopter was placed on the tail boom. He had to develop a drive with power take-off from engines. It is noteworthy that the main rotor with the original drive did not create a significant reactive moment, and thanks to this, the main task of the tail rotor was heading control. 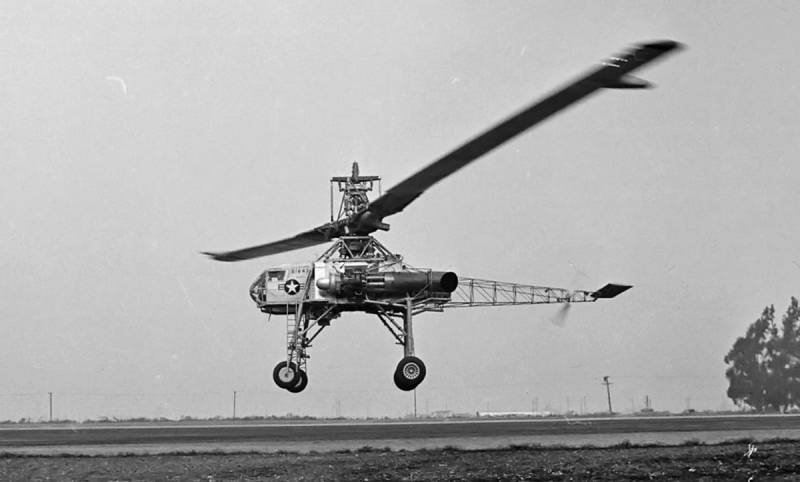 View from a different angle. Photo US Air Force
The XH-17 helicopter was brought out for testing only in the summer of 1952. Once again, they conducted a full cycle of ground tests, after which they received permission for the first flight. On October 23, pilot Gail Moore first took the XH-17 into the air. The flight lasted about a minute. Having taken off, the pilot noticed an excessive load on the controls and immediately landed.

After adjusting the control systems, flights continued. New features were constantly demonstrated, as well as various shortcomings were identified and immediately corrected. At the same time, it was not possible to get rid of the vibrations of the rotor. Despite this, it turned out to conduct an almost complete test cycle, incl. with the definition of the main characteristics.

The helicopter, 16,25 m long and 9,17 m high, had a dry weight of 12956 kg and could lift the required load of 1 thousand pounds. During the tests, a flight was carried out with a maximum mass of 19,7 tons and a cargo twice as large as required by the customer. Payloads of various kinds were suspended between the landing gears. The maximum speed of the car reached 145 km / h, range - 64 km. 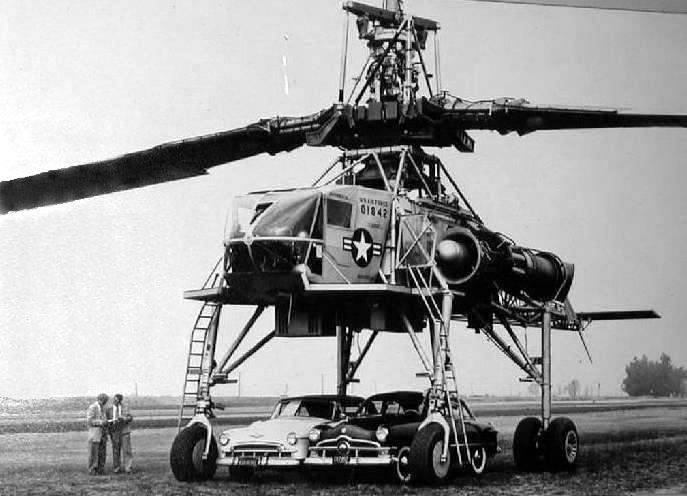 Demonstration of the size of the helicopter on the example of cars. Photo US Air Force

In early 1952, Hughes received an order to develop a new helicopter. Based on the experience of the XH-17 project, the XH-28 helicopter should be created - a full-fledged machine suitable for operation in the army. Work on the XH-28 continued until mid-1953, after which the customer refused to further support the project.

In this regard, the prospects of the existing XH-17 helicopter were called into question. It was used to research and develop experience in the interests of the following projects, but now all these works did not actually make sense. However, Hughes Aircraft did not stop testing and continued its scientific work, even without real prospects. 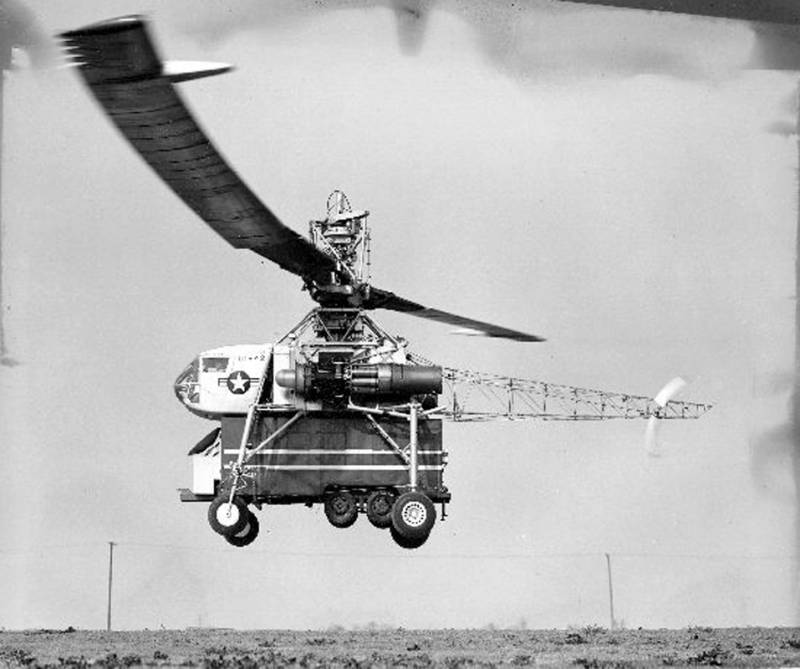 Transportation of a standard trailer. Photo by San Diego Air and Space Museum / travelforaircraft.wordpress.com
Flight tests of the experimental Hughes XH-17 Flying Crane continued until the end of 1955 and were completed in connection with the development of the resource of the rotor blades. By this time, all the required data had been collected, and the project lost its real future. Therefore, the production of new blades was considered appropriate.

In terms of performance, the helicopter generally met the previously stated requirements. He could carry all the planned cargo - and even more. After refinement, the helicopter was distinguished by a low level of vibration in the cockpit and an effective control system based on hydraulics. 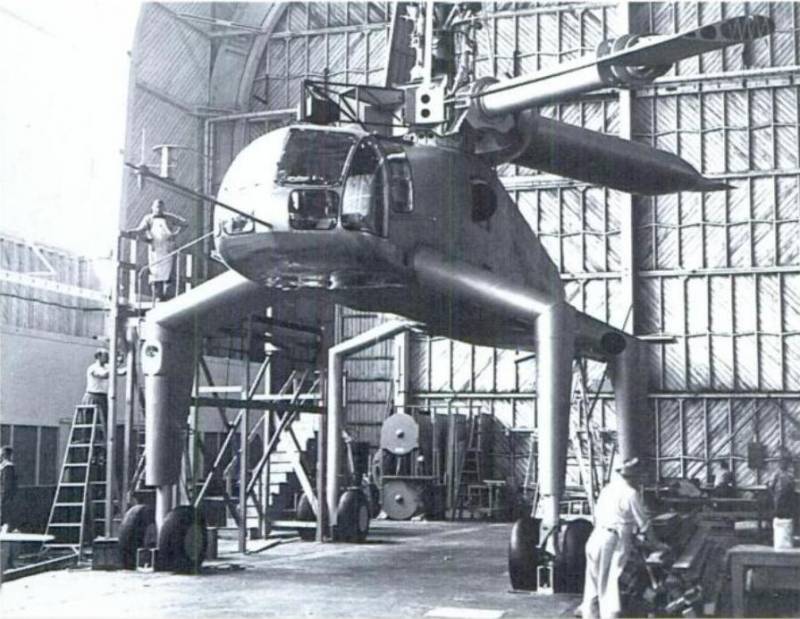 Unfinished model of the XH-28 helicopter. Photo Secretprojects.co.uk
At the same time, the car was not sufficiently maneuverable and carried out commands with a noticeable delay. During the tests, the lack of reliability of some units was manifested, because of which the helicopter was regularly sent for repair. Perhaps the main problem was the excessive fuel consumption of two engines. Because of this, the practical radius was limited to only 64 km instead of the required 160 km.

The main developments on the XH-17 helicopter were used in the new XH-28 project, but it was not completed. After testing, the experienced XH-17 went to the parking lot with no clear prospects. Later it was dismantled as unnecessary. The same thing happened with the full-size layout of the XH-28.

Despite the lack of real results, the “Flying Crane” of Kellett and Hughes remained in the history of American and world helicopter engineering. He showed record features and special features - by the standards of his time. Further development of the helicopters led to new achievements, but one of the XH-17 records still remains untouched. Its rotor to this day is the largest among the built helicopters. However, this did not help the car reach the series and operation.

We are in Yandex Zen
Mi-28 - combat helicopter
An-12 in Afghanistan
7 comments
Information
Dear reader, to leave comments on the publication, you must to register.