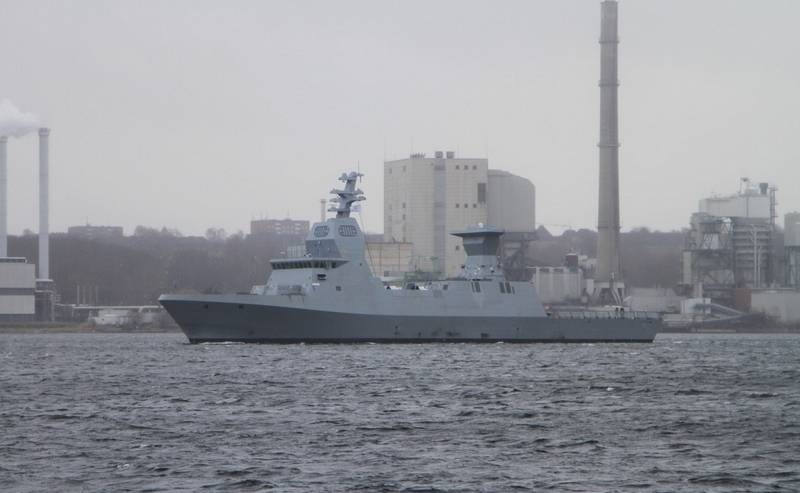 The head corvette of the Saar 6 project, built in Germany for the Israeli Navy, went to factory sea trials. According to Israeli media, the corvette, called Magen, after the end of sea trials will go to Israel, where it will be installed weapon and electronic equipment.


An intergovernmental agreement on the construction in Germany of four Saar 6 corvettes for the Israeli Navy was signed in 2015. According to the agreement, only the ships themselves are being built at German shipyards, and Israel will independently install armaments and electronic equipment. The Magen head corvette is planned to be handed over to the customer in the spring of this year, the next three ships will be surrendered at intervals of about six months, with the delivery of the fourth at the end of 2021. Israeli Navy plans that after installing weapons and equipment corvettes will be part of fleet in 2021-2022 years.

The lead ship of the series was launched on May 14, 2019 in Kiel from the boathouse of the German Naval Yards Kiel shipyard and Kieler Werft TKMS was moored for completion, where the baptism procedure took place, during which it was named Magen.

Corsets of the Saar 6 project were developed on the basis of the German project MEKO A100 (and variations for the German Navy of the K130 project). The total displacement of the Saar 6 Corvette Project is in 1900 tons, the ship’s length is 92 m, the width is 13,5 m and the draft is more than 4 m. The crew is about 70 people.

The corvettes of this project are distinguished by quite powerful anti-aircraft and anti-missile weapons for a ship of this size, which includes the 32-charging installation for vertical launch of the medium-range and long-range Barak 8 SAM and two 40-charging launchers of the tactical missile defense system C-Dome (marine version of the Iron Dome).

In addition, the ships will be armed with 16 PU PKR, 324-mm torpedo tubes for anti-submarine torpedoes Raytheon Mk 54 and helicopter Sikorsky SH-60 Seahawk. Artillery armament will be limited to two 25-mm Rafael Typhoon remote-controlled artillery mounts (with the possibility of using also Rafael Spike-ER missiles from these mounts).

The basis of the electronic armament of the ship will be a multifunctional radar complex IAI Elta EL / M-2248 MF-STAR with fixed placement of radar antennas with AFAR.

We are in Yandex Zen
In Germany, the head corvette project Saar 6 for the Israeli Navy launched
Reports from the militia of New Russia for 27-28 September 2014 of the year
129 comments
Information
Dear reader, to leave comments on the publication, you must to register.