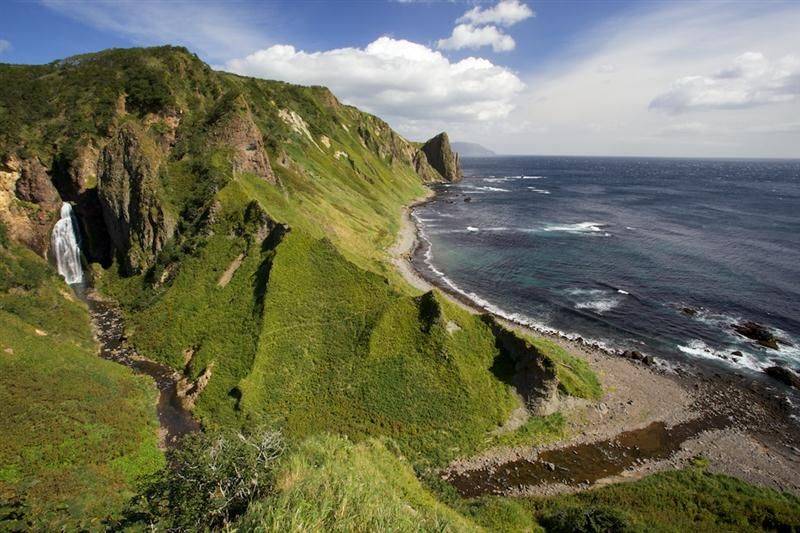 In Japan, they are looking for "loopholes" in the country's Basic Law regarding the Kuril Islands. Japanese media are vividly discussing an amendment to the Russian Constitution prohibiting tearing off the country's territory. Commentators at Asahi Shimbun, Nihon Keizai, Hokkaido Shimbun and other newspapers agreed: “Russia claims that the Northern Territories (South Kuril Islands) belong to it by right, and if such an amendment is made, it will complicate further Japanese Russian negotiations. " [center]

Who forgot the story of the joint Declaration

The metropolitan newspaper Toyo Keizai categorically does not agree with this conclusion, or rather, the diplomat (as the publication positions him) Masaru Sato, who posted his lengthy article in this publication. Reading it, you recall the comedy by Alexander Ostrovsky, "For every sage, quite simplicity."

The simplicity of the diplomat Sato rolls over. In his opinion, Japanese journalists writing about Russia did not carefully study the Russian Constitution, so they turn into a matter of dispute what is not.

First, Sato refers to the text of the current Constitution of Russia, adopted in 1993: “In accordance with the procedure established by the Constitution of the Russian Federation, the president takes measures to protect the sovereignty of the Russian Federation, its independence and state integrity, ensures the coordinated functioning and interaction of state authorities.”

From the cited short story, the author concludes that this is a "ban on the alienation of territories." However, it does not prevent President Vladimir Putin from negotiating a new status for the “northern territories”. It is appropriate to recall here that only specially authorized persons of the State Duma and the Federation Council are entitled to legal interpretation of legislative acts. A particular view of the problem (in this case, the diplomat Sato) cannot be the norm applied in bilateral relations.

Moreover, the article of the Constitution mentioned in the Toyo Keizai did not prevent the Russian territories from being torn off in the Chinese and Azerbaijani border areas and the Bering Sea. So, the Basic Law of Russia in this part requires additions and clarifications.

Further - from the series about Kiev uncle. Out of connection with the Constitution of the Russian Federation, Masaru Sato recalled the meeting in Singapore on November 14, 2018 of Russian President Vladimir Putin and Japanese Prime Minister Shinzo Abe. At it, the parties "reached an agreement to expedite negotiations on a peace treaty on the basis of the Soviet-Japanese declaration of 1956." Hence the conclusion: everything that was agreed before the adoption of the amendments is not subject to revision.

He draws his flimsy argument to the succession of Russia and concludes: “Russia is the successor of the USSR, therefore it bears the responsibility of fulfilling the international rights and obligations of the Soviet Union.”

Masaru Sato forgot that back in 1960, the USSR refused to transfer the Kunashir and Iturup islands to Japan, since Tokyo did not fulfill the main condition of the Declaration. She was tied to the conclusion of a peace treaty, which would have fixed the neutral status of Japan.

Instead, the Japanese government signed the "US-Japan Interaction and Security Treaty," allowing Americans to use military bases on its territory. By the way, at one of the meetings with Abe, Putin told him something like this: we will give you the islands, and you will launch the Americans with missiles there. The Japanese prime minister, as the media wrote, did not find what to answer.

Perhaps you should not evaluate the other arguments of Masaru Sato. They are from the same series that are already given. Continuous Wishlist to return the "northern territories", not taking into account the interests of Russia, its concerns and risks, not to mention the new approaches in the legislation, which the Japanese diplomat so clumsily referred to.

Meanwhile, among the Japanese there are really thinking people. One of them, Itiu Inui, writes in Viewpoint, a Japanese English-language publication:

Discussions about the territorial issue in Japan have always been one-sided, and the Japanese do not fully understand the military value of the Kuril Islands, which they represent for Russia. They are her "defensive bastion", harboring from the United States.
The author recalls Stalin's post-war statement that the Kuril Islands will henceforth play the role of a “breakwater” protecting the USSR from attacks from the Pacific Ocean, as well as the role of a support base for advancing into the Pacific Ocean.

“Non-freezing sea lanes located in the southern part of the Tishima archipelago between the islands of Kunashir, Iturup and Urup (Kunashir Strait, Catherine Strait, Frieza Strait, etc.) are important sea gates leading to the Pacific Ocean,” writes Itiu Inui and adds, “The value of the Kuril archipelago that Stalin spoke of has not changed to this day.”

Here, the Japanese author is not quite right. Six years ago, the UN Commission on the Limits of the Continental Shelf recognized the central part of the Sea of ​​Okhotsk as Russian territory. Affected, in particular, and the internal Russian character of this water area. Now almost the whole sea is ours. The transfer of the southern islands of the Lesser Kuril Range to Japan may change the current status of the Sea of ​​Okhotsk.

What, of course, you need to agree with the author of Viewpoint, is that "the chances of Japan returning the" northern territories "are extremely low." Itiu Inui explains his conclusion by strengthening the Russian military potential in the Far East and finds a sound justification for this: “The Kunashir and Iturup Islands effectively“ cover ”the Sea of ​​Okhotsk from breaking through the American naval forces.” Simple and without amateurish frills in the Russian legislation.

Nevertheless, the Japanese were not in vain worried about changes in the Russian Constitution: it also protects the country's security from possible short-sighted decisions of the highest authority.

We are in Yandex Zen
Kuriles - an integral part of our homeland
After Senkak Japanese take up the Kuril Islands?
38 comments
Information
Dear reader, to leave comments on the publication, you must to register.