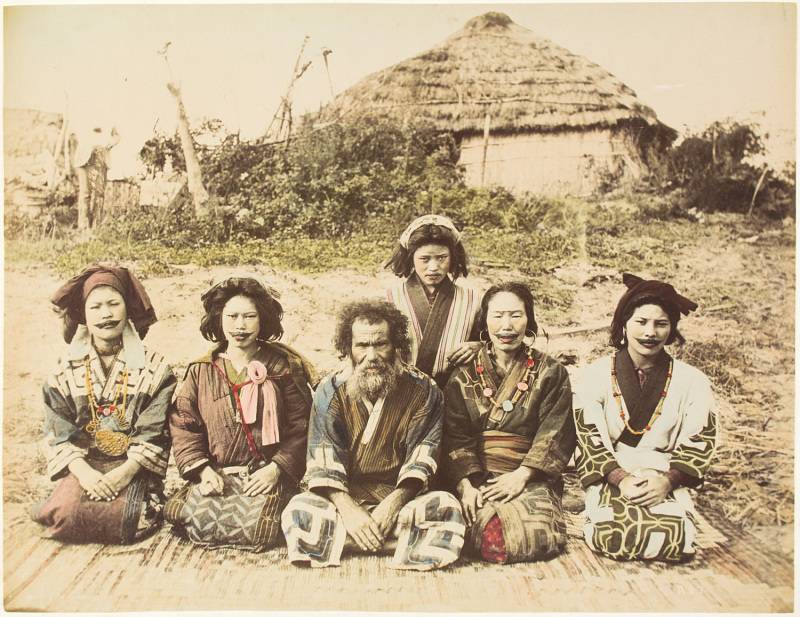 A 1890 photo of the Ainu from the National Museum of the American Indian in Washington.

At the crossroads of civilizations. В past Ainu material, the mysterious people who are considered the indigenous people of the Japanese islands, we talked about him stories based on materials from the Japanese Ainu Museum in Hokkaido. But not only the Japanese are engaged in Ainu, not at all. Materials related to their history and culture ended up, for example, at the Museum of the American Indian in Washington, although the Ainu themselves did not seem to appear in America. How did this happen? And here's how: when the Americans “discovered” Japan in the XNUMXth century, they also visited Hokkaido. They took pictures of local residents, bought samples of clothing and weapons of labor. And then all this fell into the famous Smithsonian Institution, on the basis of which the Museum of the Indians was created. But our historians are also on the alert. So, Sakhalin archaeologists recently found two monuments at once, which say that the Ainu were in Russia, or rather, on the Kuril Islands. This is a burial on the island of Shikotan and traces of the ancient Ainu settlement on the island of Tanfilyev, which is part of the Lesser Kuril ridge. Yes, actually, why don't they swim here? After all, if they settled the Japanese islands back in the Neolithic era, then the ocean level was lower than now, there is more land, islands are closer. That is why it was easier for them to master them. 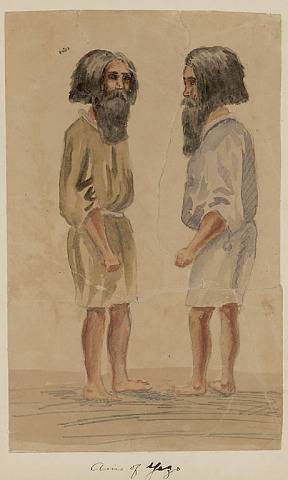 Ainu, watercolor by an American artist in 1853 (National Museum of the American Indian, Washington) 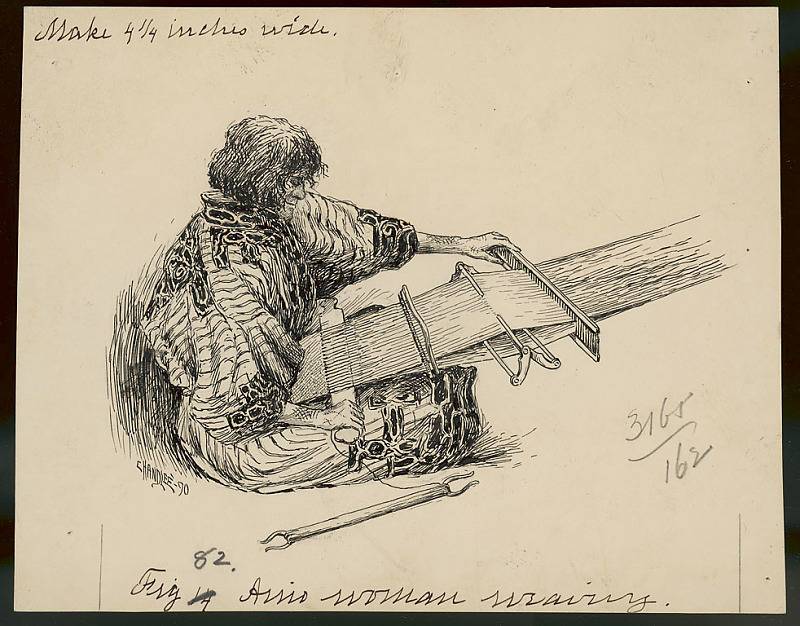 Ainu woman spins on a horizontal spinning machine. Fig. 1890 (National Museum of the American Indian, Washington)
Today, the Ainu mainly live in Japan. The census showed that there are about 25 of them, but there are also unofficial data that say that they really are more - about 000. Moreover, they are very different from the native Japanese, they have either Australoid or Caucasoid features. Well, such a feature as a thick beard is not atypical for the Mongoloids. That is, when we see in the photographs the faces of the Japanese, who are actually not similar to the Japanese, the reason here can be many factors, including the presence of Ainu among their ancestors. What is not so incredible. Famous Japanese families with Ainu roots that were related to other families, so the presence of Ainu genes in many Japanese people is not excluded. 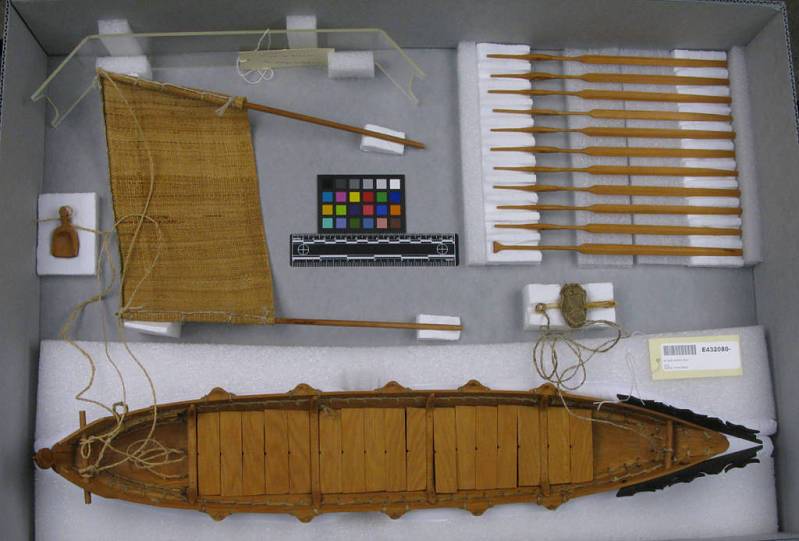 The layout of the Ainu boat. National Museum of the American Indian, Washington
For a long time, the Ainu were believed to be aliens from Micronesia, since in the summer they tried to walk in only one loincloth. And their language was not like either Japanese or other eastern languages. Now it seems to have been established that the ancestors of the Ainu, before reaching the Japanese islands, visited Tibet, and, obviously, went through China, and only after that settled here. 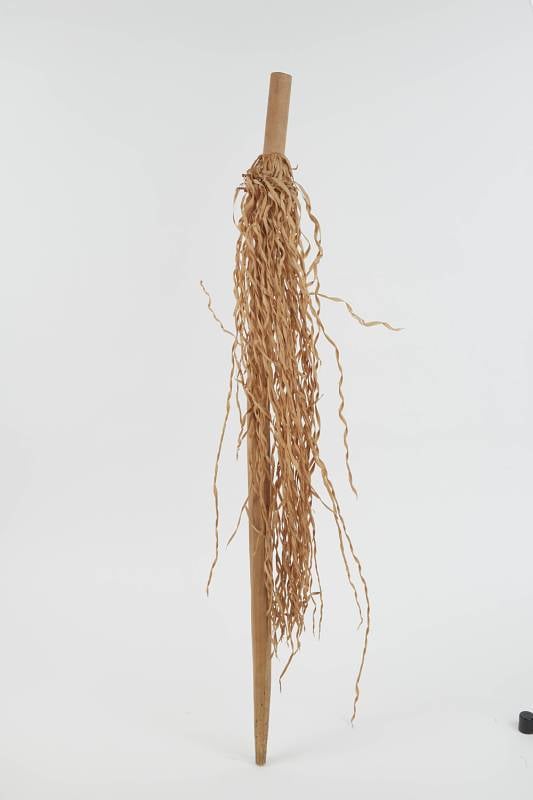 Wand with zastrugi. The subject of the Ainu cult. National Museum of the American Indian, Washington
It is possible that in the territory of Russia the Ainu habitat was wide enough. This could be the lower reaches of the Amur, and the south of the Kamchatka Peninsula, the entire island of Sakhalin and the Kuril Islands. And yes, indeed, they also managed to find them in Russia, only it turned out to be very few, about a hundred people, mainly from Kamchatka. Interestingly, they believe that their distant ancestors lived on the islands of Iturup, Kunashir, Shikotan and Habomai. 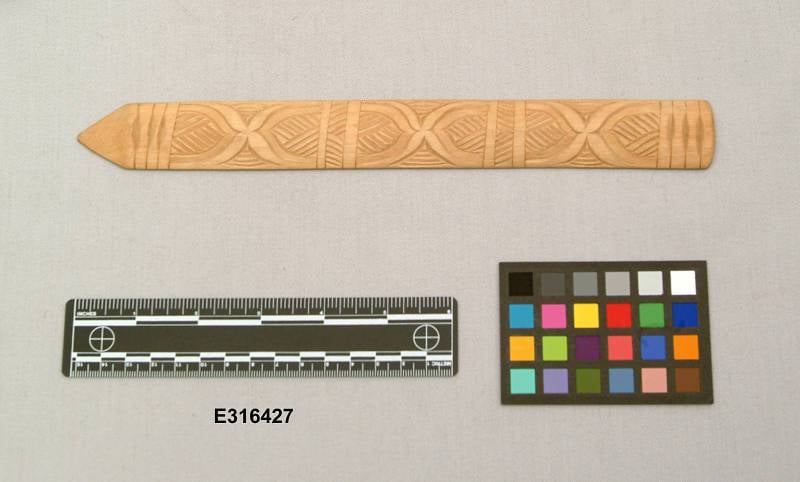 Also a very interesting cult item. A mustache was held with such sticks, and they were also dipped in sake and sprayed with them as a sacrifice to spirits. National Museum of the American Indians, Washington)
So on Shikotan they found several dozen burials of Ainu. It is possible that they came here in the XNUMXth century from the Northern Kuril Islands, from where the Japanese brought them during the division of island lands with Russia. It is known that resettled Ainu usually had a very hard time. But about life under the rule of the Russian Empire, they have preserved quite good memories. Judging by their stories, they were satisfied primarily by the fact that the Russians did not interfere in their affairs and turned out to be much more merciful to them than the Japanese ... 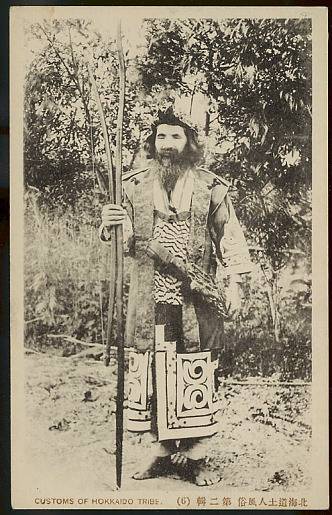 Typical Ain from Hokkaido. National Museum of the American Indian, Washington
Apparently, this is why many Ainu were baptized and began to profess Orthodoxy. They eagerly made contact with Russian travelers exploring the Kuril Islands. And those, in turn, noted in their diary entries the characteristic features of this people. For example, the Russian navigator and researcher Ivan Kruzenshtern, who sailed in these waters, wrote the following about Ainu:

“Such truly rare qualities, to which they owe not to an exalted education, but to nature alone, aroused in me the feeling that I regard this people as the best of all the others that until now have been known to me.”
That's even how - and all this is due to nature! 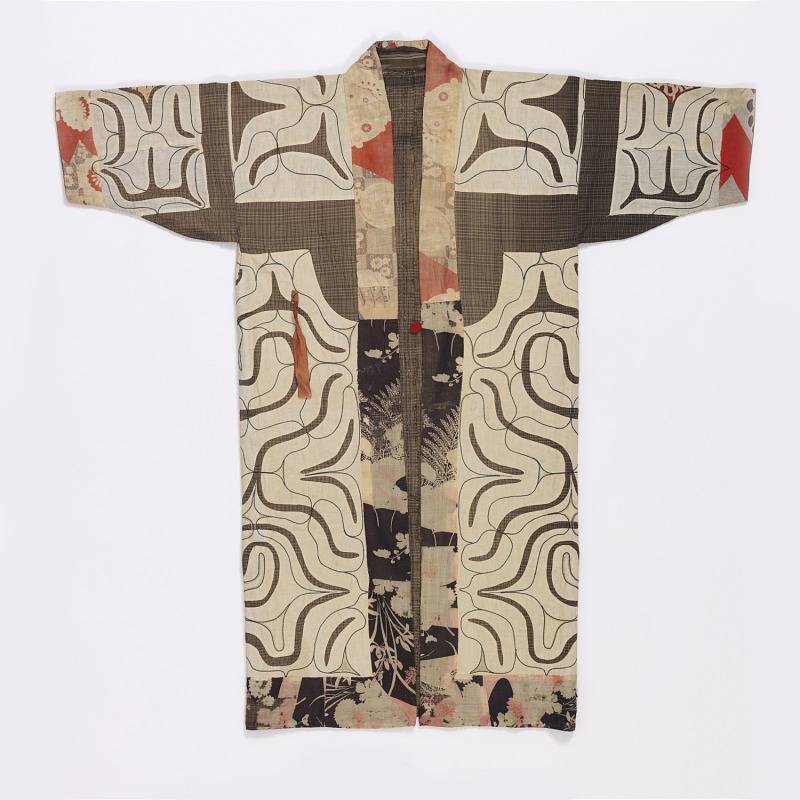 Ainu clothes are truly decorative and exotic! National Museum of the American Indian, Washington
For example, on the island of Tanfiliev, almost the smallest of the Kuril Islands (its area is only 15 square kilometers), the remains of ceramic vessels characteristic of the Ainu and several other artifacts were found. Ceramics clearly belonged to the Jemon culture (as evidenced by the spiral patterns applied to it), it is very ancient, it is about eight thousand years old. And what is surprising is that the Ainu were able to somehow preserve their primitive culture for millennia! 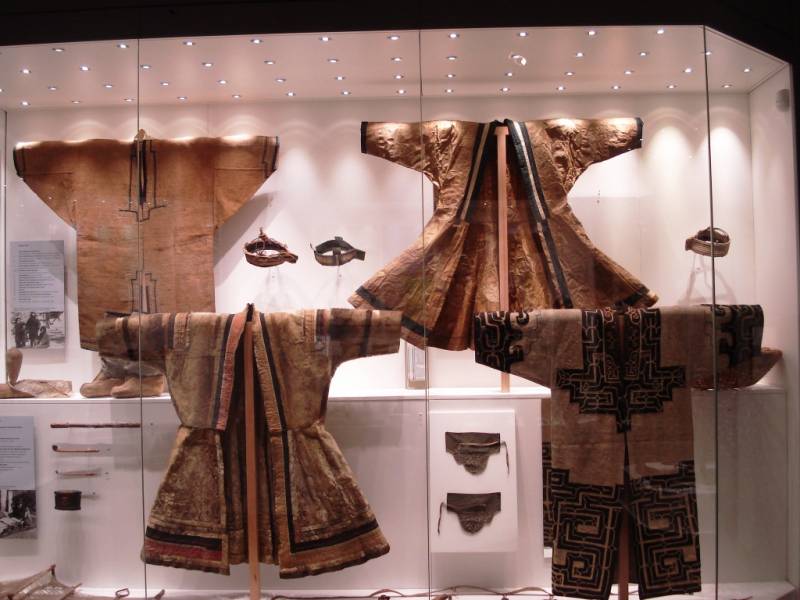 It should be noted that in our country the Ainu culture was reflected in museums, and (and this should be emphasized especially) in the modern and beautifully decorated Sakhalin Regional Museum of Local Lore. It is clear that it is not easy for us, residents of central Russia, to get there, but the museum’s website has an excellent interactive tour and a very interesting (and I would say, unique in some way) gallery of artifacts stored in it. Here, for example, is how their national clothes are represented there. 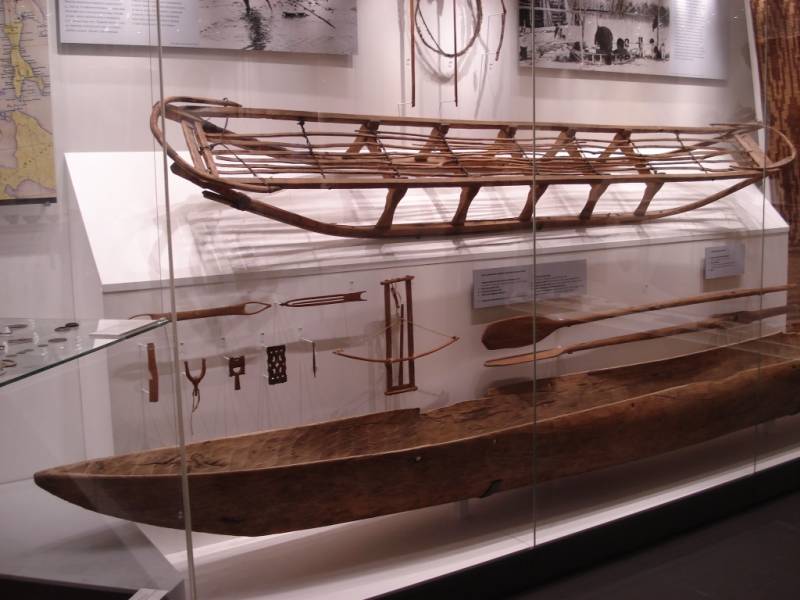 And these are “vehicles” (Sakhalin Regional Museum of Local Lore)
Other nations succeeded, but many of them lived in isolation, while the Ainu of ancient Yamato kept in contact with the ancestors of today's Japanese. Yes, they learned to drink sake, but ... well, that's all. Well, our archaeologists have work here, on the edge of the earth, to find out how long people lived here and who they were. 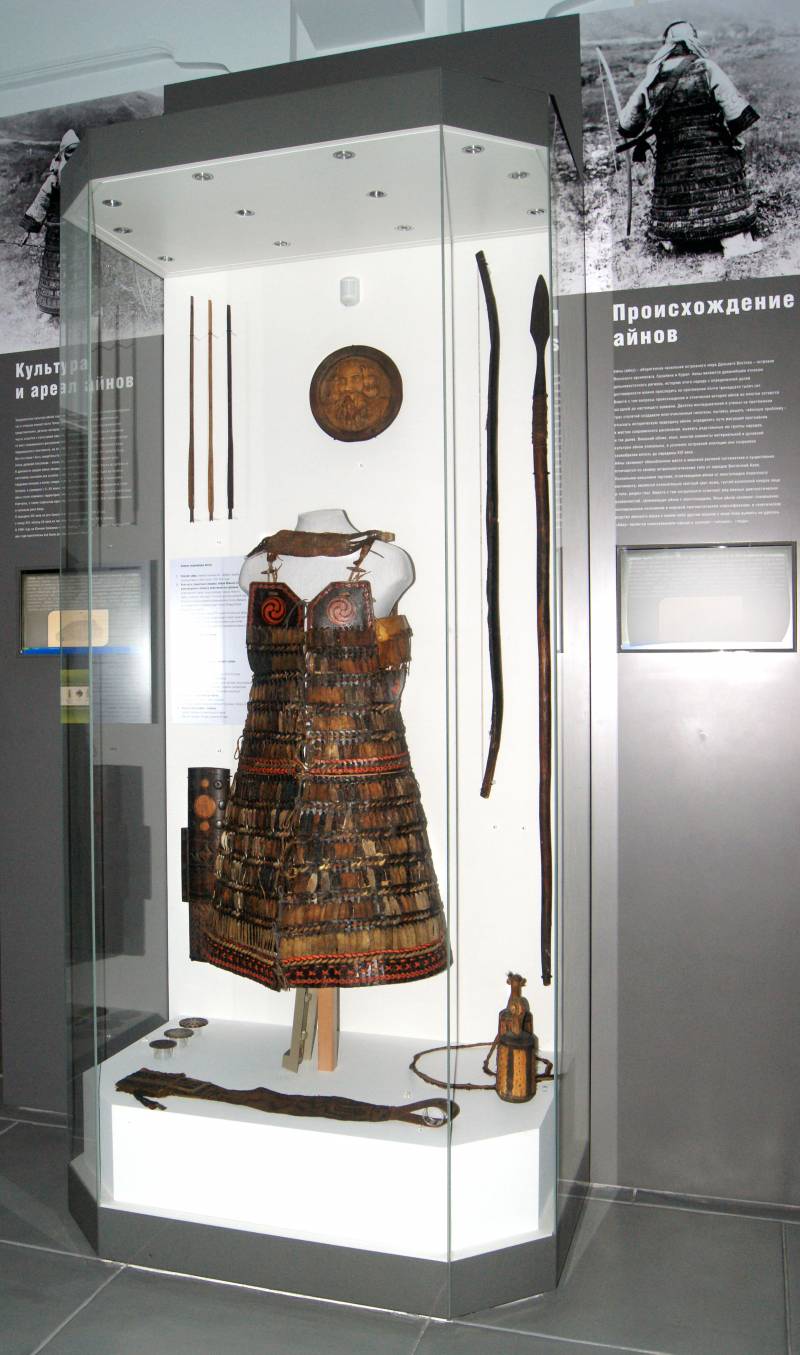 An interactive tour will show you a close-up and a completely unique exhibit, which this museum can rightfully be proud of: Ainu armor made of hard leather plates, connected again by leather straps. It looks like a showcase in which Ainu weapons and this armor are displayed. The plates on the chest have the characteristic shape of ancient Chinese shells. And here's what is interesting, who borrowed what from whom in this case? Ainu among the Chinese or Chinese at the Ainu? (Sakhalin Regional Museum of Local Lore)
It is interesting that the Ainu today are most actively seeking to participate in the dialogue on the Kuril Islands and to reconsider the question of their affiliation, given their Ainu interests. After all, Japan, they say, has appropriated our lands where we once lived. So, while excavating, we may well encounter an interesting paradox: are Japan and Russia entitled to share all these lands among themselves? Indeed, back in the XNUMXth century, old-timers of Sakhalin Island said this: "Sakhalin is the land of the Ainu, there is no Japanese land on Sakhalin." 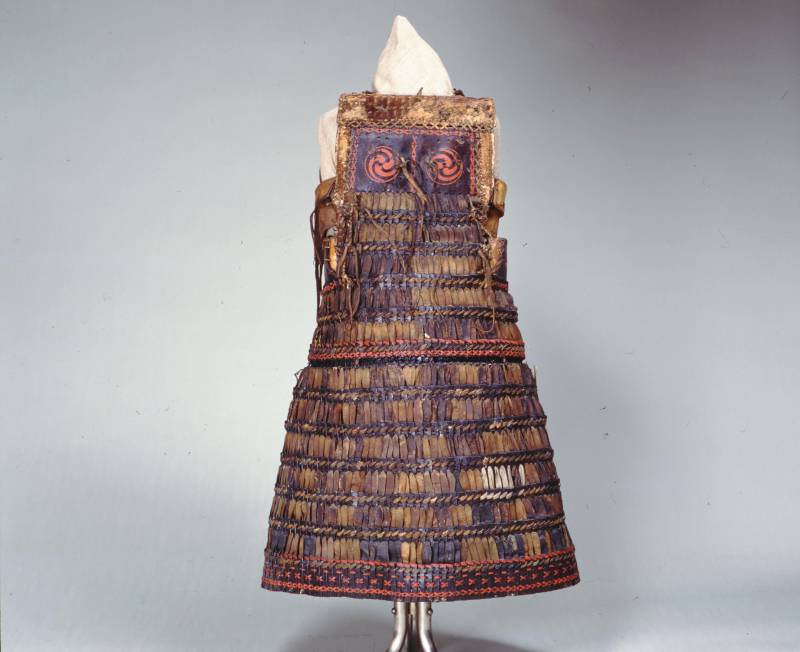 And this armor looks like this from the back. A very rare photograph provided by the museum administration to the author
There is also a unique diorama in the museum’s exposition - a model made by exiled convicts of the early twentieth century, which depicts the famous Ainu bear festival. Moreover, its uniqueness lies primarily in the material from which it is made. This is our ordinary brown bread, which, by the way, is an excellent material for modeling. This is a historical monument, and good information for thought to the organizers of small businesses. “Figures made of bread according to the technology of Russian convicts from Sakhalin at the beginning of the twentieth century” - advertising at least where, right? And here you can make whole sets of figures "Russian Fair," Russian Bath "and" Religious procession ", and all the same Ainu -" An exact copy of the diorama of the beginning of the twentieth century ... from the museum on Sakhalin "and many, much more in the best traditions Russian culture! 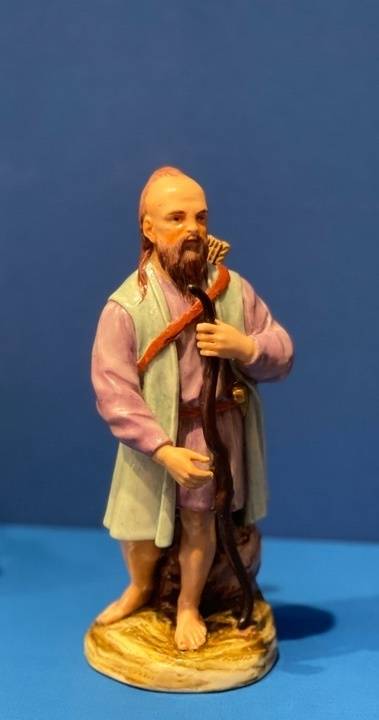 Kurilets (most likely, Ain). State Russian Museum. Sculptures from the series "Peoples of Russia". Porcelain, overglaze polychrome painting, gilding, silvering. 1780-1790s Model author Jacques-Dominic Raschett. Photo by Anastasia Timofeeva
And now, not only oral traditions, but also material evidence confirm that the Ainu in the past, and in the historically not so long ago, lived on Sakhalin and on many Kuril Islands.

PS The site administration and the author of the material personally thank the directorate of the Sakhalin Museum of Local Lore for permission to use their photo materials.

Author:
Vyacheslav Shpakovsky
Articles from this series:
Ainu: a long way through the centuries