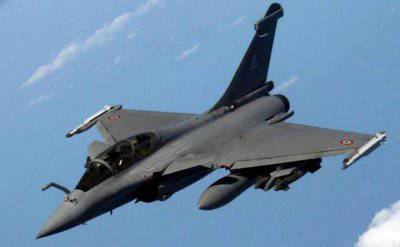 Estonia intends to provide an opportunity to conduct missile firing and bombing training to the NATO allies' military airplanes patrolling the skies of the Baltic countries in 2014, the lieutenant colonel Jaak Tarien, head of the republic’s air force, told reporters on Tuesday.

According to him, the flight crews of the North Atlantic Alliance countries, which in turn carry out patrols in the skies of Estonia, Latvia and Lithuania from the Lithuanian airbase Zokniai, require not only training flights, but also shooting practice, ITAR-TASS reports.

“Since the beginning of the NATO mission in the 2004 year (by the allies), concern has been expressed that pilots cannot fully train. The importance of the mission requires us to create the necessary (for shooting and bombing) sites, ”said Tarien. He clarified that in certain sectors of Estonian airspace, the Allies can now train not only at an altitude of three kilometers, as it was before, but also at an altitude up to 200 meters.

“Some countries want to conduct training bombing and air-to-ground missile firing. By the end of 2014, the NATO aircraft will be provided with such an opportunity based on the central range, ”the head of staff said. “At the NATO summit in Chicago in May, the previously achieved, extremely important agreement for Estonia was approved. Our allies decided to indefinitely extend the mission to protect the airspace of the Baltic countries. This meant an understanding of the fact that for Estonia, Latvia and Lithuania, in a financial sense, it is impossible and unwise to buy airplanes themselves, ”Delfi quoted Estonian Eesti Päevaleht.

However, the NATO allies, who create an umbrella for a six-month rotation, do not make such decisions out of goodwill. Estonia, along with Latvia and Lithuania, also had to make its proposal, that is, a package that would help the planes flying here to cover a little.

Igor Korotchenko, chairman of the Public Council under the Ministry of Defense of the Russian Federation, commented in an interview with Delfi: “if a test site is really created, then in Russia this, of course, will be met negatively”. He said that low-altitude flights with attacks would be perceived in the context of NATO’s unfriendly military policy and subsequently projected onto Estonia.

Korotchenko believes that Russia's reaction will be to strengthen the cover of its air border with Estonia, “first of all, by deploying new anti-aircraft missile systems and increasing radar stations in order to monitor what is happening in the adjacent airspace in order to identify possible threats to Of Russia. "

The political reaction, taking into account the “overall cool content of Russian-Estonian relations,” will follow in any case, since Russia does not increase its military presence on the border with Estonia. “In our case, on the contrary, the groups in the Western Military District are on the whole shrinking. Therefore, there is no need for a harsh reaction from Estonia to any military threats from Russia. They simply do not exist, ”said Igor Korotchenko.

“Of course, we do not see the danger of war as such, but it’s still unpleasant. It’s as if your head began to make some shots - not at you, but somewhere close. Therefore, the elementary logic of military response says that it will not go unnoticed, ”the expert believes. On the question of whether it is not too risky games for such a small country as Estonia, the Russian expert answered that such behavior is inadequate.

“It seems that Estonia does not want to look at the world around us, which is changing. These are Soviet phobias raised to a cube. It reminds me of an American Minister of Defense, who jumped out of the window, shouting “Russians are coming!”