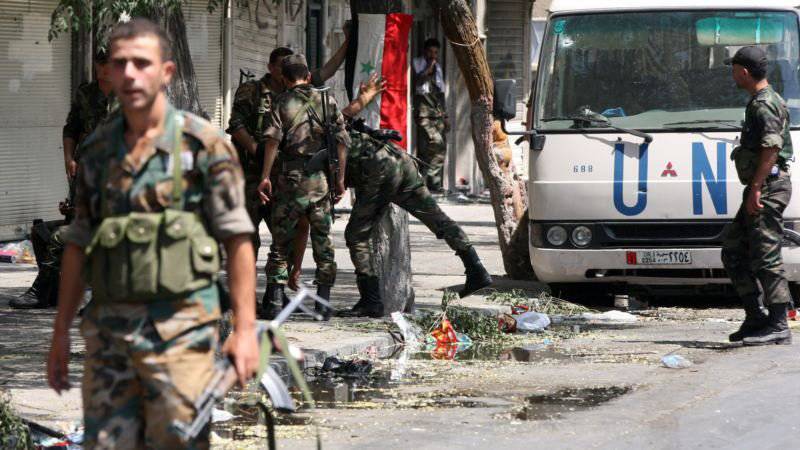 Sources of information - as sources of drinking water.

You will be “drinking” information from the BBC, Al-Jazeera or some “independent-new” newspaper - you will become a kid.
One of my acquaintances is an active blogger and an even more active organizer of the parent movement against the introduction of juvenile justice in Russia; rally in St. Petersburg Mikhail Bogdanov got the opportunity to get in touch with his acquaintance living in Damascus.

Here is the first-hand information about events in Syria ...

“Events in Syria, which are so deeply disturbing to the“ world civilized society ”, have come to the fore today in news news agency tapes. We are told that people who are outraged by the "unjust and oppressive regime" are trying to overthrow this very regime.

However, remembering history With Libya and a number of other countries in the north of the African continent, these statements by the media and politicians cause more and more doubts among viewers. And the main question that arises here is why suddenly “the people rebelled against the authorities”. He lived before that for thirty years calmly, and then he went out into the streets with weapons in hand. And, by the way, where did the "people" come from with very specific weapons, such as grenade launchers and sniper rifles, which are shown on television?

To try to understand what is happening and to make sure that the information coming from Syria is true, we will try to record events, receiving information from various sources: from the residents of Damascus and from the aforementioned media, we have the opportunity today ...
So, let's begin.

According to the information of our compatriot who today works directly in Damascus (we will not name his position and name yet), the situation in the city is calm, and only a cannonade is heard from time to time - these are troop formations “smoked” by provocateurs - militants from the outlying residential areas of the city.

The tactics of these people, armed with machine guns and sniper rifles, are simple: they, in groups of 50 - 100 fighters, penetrate into a residential area, disperse through the streets and begin shooting at the military, who will be noticed: at roadblocks, at patrols, along separately moving military.

Here it should be clarified what Damascus “residential neighborhoods” are. Remember the episode with the hero Andrei Mironov in "The Diamond Arm", when he got lost in a Mediterranean city? He ran there through the streets where the two cyclists would not go, and where from one house you can go to another, located on a nearby street? This is a typical eastern city - the same is arranged, for example, old Jerusalem, and so is Damascus. Accordingly, in such areas it is very easy to hide, move unnoticed, and arrange all kinds of ambushes.

So, for example, the minaret of the parish on the outskirts of Damascus, from where the militant fired for some time at targeted representatives of the "bloody regime", became the ambush site for one of the snipers the other day. The sniper was aiming his victims until they planted him on tank - the most effective, albeit unfriendly way to neutralize not only a combat unit, but also the firing point itself. Now the minaret gapes with a huge hole in the "workplace" of the muezzin and, most likely, cannot be restored.

When I asked why the militants should arrange these ambushes and armed clashes, my interlocutor said that, apparently, their task is to destabilize the situation in the city, to force the situation. And, quite possibly, the main thing is to demonstrate to the world that “the battles are already going on in Damascus itself”. The effectiveness of these “battles” is almost nonexistent, especially after the new defense minister announced a new tactic to combat terrorists: a total sweep of the areas where they are found. The previous leaders of military operations, who died as a result of the 18 terrorist attack, tried to “negotiate” with the militants and “smoke out” them from residential areas only with the help of scatter work. A new tactic of government troops is reduced to the fact that the quarter in which the militants were found is blocked, residents are evacuated from it, and then tanks, specially introduced for this purpose, are now working in the city, along the firing points of the militants. And no opportunity to "come to terms" - only a total sweep of the quarter.

This, of course, is not a peaceful process at all, but the militants do not go to peaceful conditions, arguing that they are not going to put up with the “Assad regime”. And since Assad is none other than the legitimate leader of the country and his “regime”, this is legitimate authority, the people of Damascus, with whom my interlocutor has to communicate, are not at all against such tough measures. By the way, the locals treat the Russians and the position of Russia in relation to the conflict in Syria with undisguised respect, and the portraits of Assad hang in almost all public places: cafes, shops, hairdressing salons ...

This situation in the “burning war” of Damascus is observed by the eyes of my old comrade and friend at the moment. We agreed with him that we would call each day and that, if possible, he would tell what he saw — heard — learned — in the past tense. Since he is not a journalist, he refused to write, but he promised to share his impressions by phone on a daily basis. Well, I will try to expose his stories in text form and pass them on to readers in Russia. This will be a kind of response to the messages of “unnamed residents of Damascus”, on whose “opinion” the information policy of “independent media” telling about the horrors of “Assad’s crimes” and his military junta. "
The next communication session is in the evening 23.07.2012. ”

PS From myself I will add - I completely agree that the main goal of the "cannon fodder" that the militants threw into the streets of Damascus is to create the appearance of a "struggle" and "rebellion" of the people. Fools and mercenaries die on the streets of the Syrian capital ... for the sake of the picture on the TV of the western man in the street. And in the end - for the sake of pushing the UN resolution with the resolution of the intervention.

Remember throwing independent journalists about Gaddafi’s flight from Libya and the massive transfer of Libyan army soldiers "to the side of the people." After the terrorist attack in Damascus, a wave of the same lies started: allegedly B. Assad fled, and the army "moves" to another camp. "