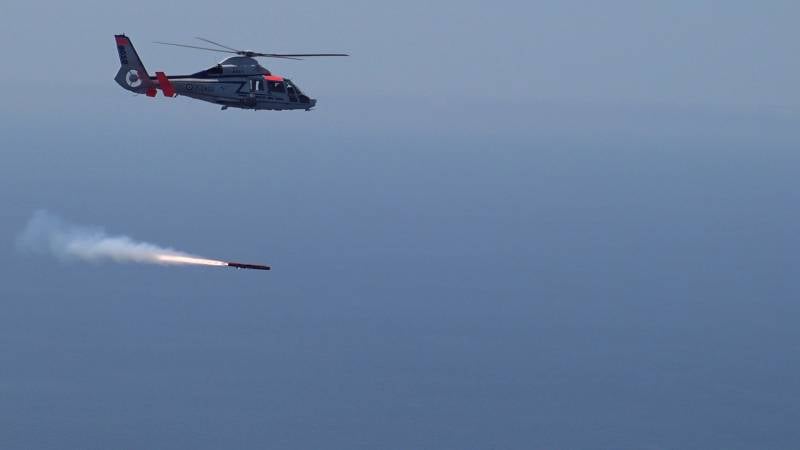 Recently, the European international company MBDA published data on recent tests of the promising anti-ship missile Sea Venom / Anti-Navire Léger. This was the third test launch of such a product, the purpose of which was to verify operation on one of the combat modes. Experienced RCC successfully coped with the task and hit the target. These events bring the moment of adoption of Sea Venom / ANL into service.

The latest launch at the moment - the third in the framework of the flight test program - took place on February 20 at the French marine training ground near about. Levan (Mediterranean Sea). The events involved an Airbus AS365 Dauphin helicopter, which is the standard carrier of anti-ship missiles, the missile itself and the floating target.

The rocket was launched from the minimum permitted height. After that, the product gained speed and reached a cruising height, not more than a few meters above the surface of the water. At the final section of the trajectory, the operation of control systems was checked. An infrared homing head monitored the water area and transmitted data to the complex operator. He found a training target and sent RCC at it. The missile successfully captured the target and showed high accuracy. 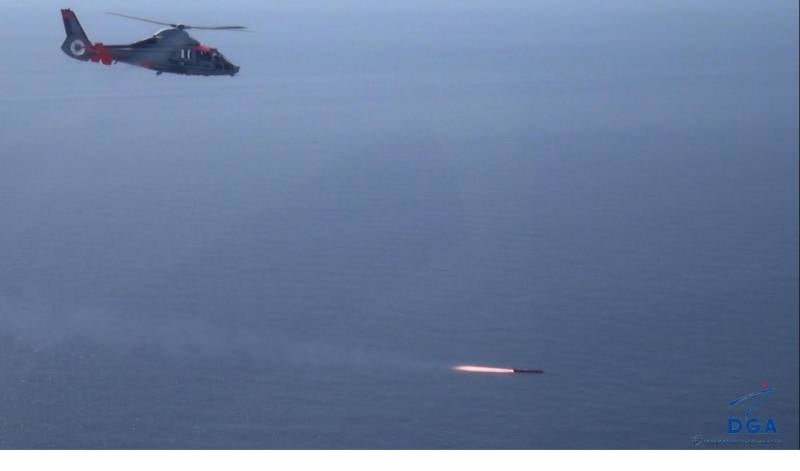 Engine starting
The MBDA press release notes that so far, there have been three test launches, including the last. In all cases, experienced Sea Venom / ANL anti-ship missiles confirmed their ability to fly at a low altitude above the sea, and also demonstrated three GOS operating modes that provide greater flexibility of use.

The aim of the Sea Venom / Anti-Navire Léger project is to create a promising light anti-ship missile for use on various platforms. While the product is being developed only for use by marine helicopters aviationbut in the future the range of carriers will expand. The missile is designed to destroy a variety of surface targets and coastal in various conditions.

In developing the rocket, the specifics of recent armed conflicts were taken into account. In this regard, much attention was paid to the defeat of small-sized targets with a small displacement. Thanks to this, it is alleged that RCC Sea Venom / ANL can successfully attack and destroy a wide range of targets, ranging from small boats. Effective defeat and incapacitation of targets up to corvettes is provided. Larger ships Sea Venom / ANL deals significant damage. 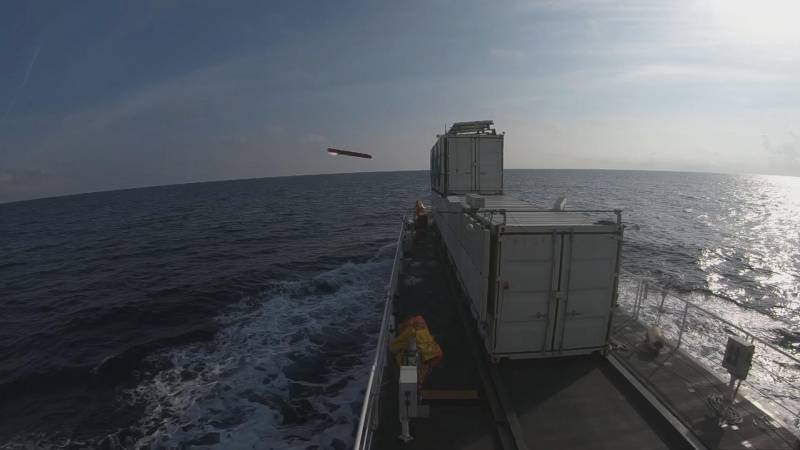 A moment before the target is hit
The possibility of effective work and target search in difficult conditions, for example, in the presence of active maritime traffic, is declared. The solution to such problems is simplified due to the presence of several operating modes of the GOS and autopilot.

Sea Venom / ANL is a single-stage solid-fuel rocket designed to launch from a helicopter carrier. It has a cylindrical body of large elongation with a series of protruding parts and two sets of planes. The total length of the anti-ship missiles is 2,5 m with a case diameter of 200 mm. Starting weight in the current configuration is 110 kg.

The missile is equipped with a multi-mode infrared seeker, the operation of which has already been tested in practice. An IIR type head with an uncooled matrix is ​​capable of taking a target for auto tracking before dropping from the carrier or after the start of the flight. These application methods weapons were tested during two previous test launches. The ability of a rocket to independently reach a given area has also been demonstrated, after which the operator remotely finds and assigns a target for the attack.

GOS has the ability to target a specific area of ​​the target, due to which it is possible to increase the effectiveness of the attack. An autopilot is able to launch a rocket at a minimum height and carry out an attack aboard or make a “slide” and hit a target from the upper hemisphere. 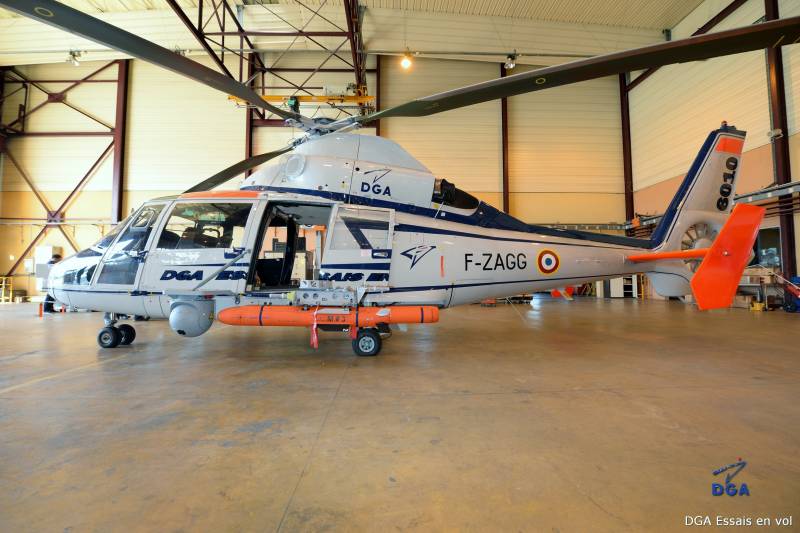 Panther helicopter and experimental rocket involved in the second test launch
Sea Venom / ANL carries a warhead weighing 30 kg. The type of this product is not specified; a penetrating high-explosive charge is probably used. Such warheads are designed to defeat watercraft with a displacement of up to 450-500 tons or certain ground targets.

The missile is equipped with a solid-fuel engine with unnamed parameters. Cruising flight speed is defined as “high subsonic”. Range - “out of line of sight”, approx. 20 km

An important feature of the Sea Venom / ANL project is the minimization of operating costs. The set of tools and infrastructure for the use of such weapons is partly borrowed from existing anti-ship missiles, which are in service with the UK Navy and the French Navy.

Helicopters in the arsenal of the British and French fleets are now considered as carriers of promising anti-ship missiles. Such equipment has already been used as part of flight tests of missiles and has confirmed its capabilities. MBDA also claims that Sea Venom / ANL can be used by a number of other modern helicopters of European and foreign design. 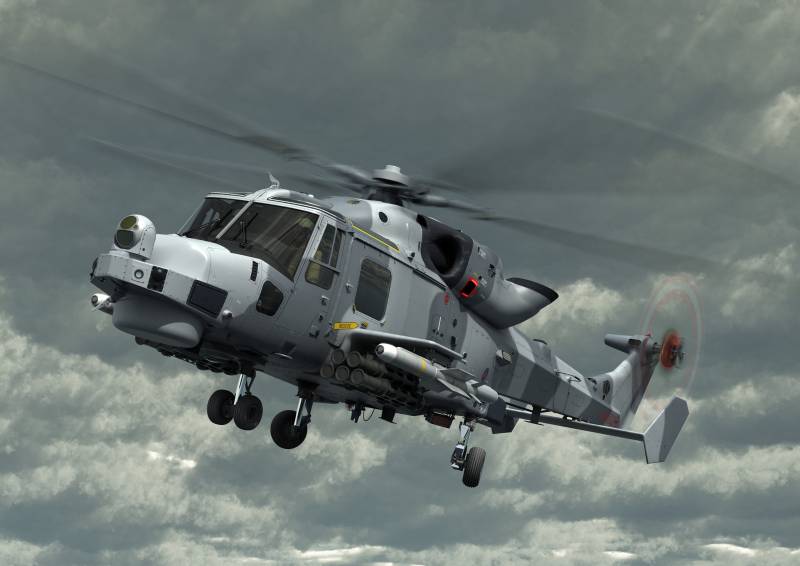 AW159 helicopter with Sea Venom / ANL rocket
Design work is underway to create a land complex based on helicopter anti-ship missiles. The possibility of developing a ship complex with the same weapons was not revealed. Perhaps such a modification of the rocket was considered unnecessary.

From project to re-equipment

The Sea Venom / Anti-Navire Léger project was launched in 2014 and is being developed in the interests of the fleets of the two countries. It was expected that the new weapons will enter service in 2021 and replace existing models. In the future, the terms were adjusted. The date of the adoption of anti-ship missiles was shifted to the right by a year.

Design work took about three years, and in June 2017 the first test launch from the AS365 helicopter took place. In May 2018, the second tests were conducted, this time the AS565 Panther helicopter became the carrier of the rocket. A few weeks ago passed the third test. Will there be new launches, and when they take place - not specified.

According to current plans, in the coming years, the Sea Venom / ANL anti-ship missiles will go into service with Great Britain and France. In the Royal Navy, the missile will be used under the name Sea Venom and will become a replacement for the obsolete anti-ship missile system Sea Scua. The latter was developed in the seventies and entered service in 1982. To date, this missile is outdated and needs to be replaced. 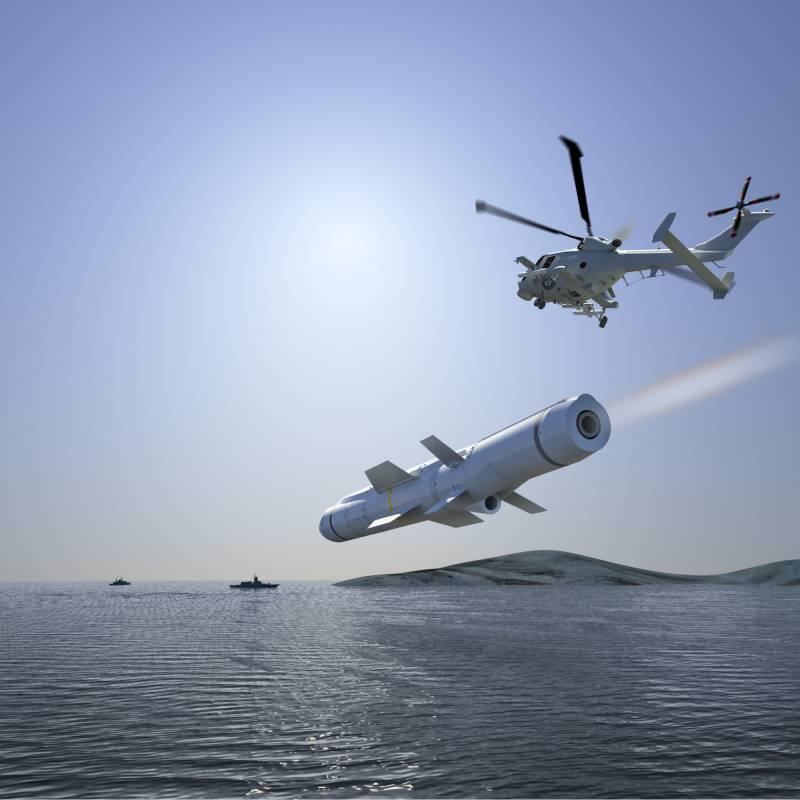 Rocket launch with AW159
The French Navy designates its future weapon as Anti-Navire Léger and plans to replace it with existing AS15TT anti-ship missiles. These products have been in operation for 35 years and no longer meet modern requirements.

In the future, the emergence of new contracts for the supply of modern missiles. The obsolete Sea Scua and AS15TT are in service with several foreign countries, which may show interest in the modern model. British RCCs are used by Brazil, India, Kuwait, Malaysia, Pakistan, Turkey and South Korea. France supplied its RCC to Bahrain, Israel, the UAE, Saudi Arabia and Chile.

Some of these countries are keen to upgrade their arsenals and may therefore be interested in the new Sea Venom / ANL missile. The compatibility of old and new missile systems for a number of components may be an additional argument in favor of the purchase.

The expected completion of the Sea Venom / ANL project in the near future will allow France and the United Kingdom to re-equip naval helicopters. It is planned to keep light short-range anti-ship missiles in the arsenals, but the existing samples are considered obsolete. To replace them, a new sample is created, successfully passing the tests.

The prospects for the Sea Venom / ANL project are broadly understood. In the near future, the KVMF of Great Britain and the French Navy will conclude contracts with MBDA, after which serial production and re-equipment will begin. What will be the export future of the project will become known later if foreign orders appear.

We are in Yandex Zen
Air fighters over the ocean waves. On the role of helicopters in the war at sea
Western development of anti-ship missiles. Part of 2
17 comments
Information
Dear reader, to leave comments on the publication, you must to register.