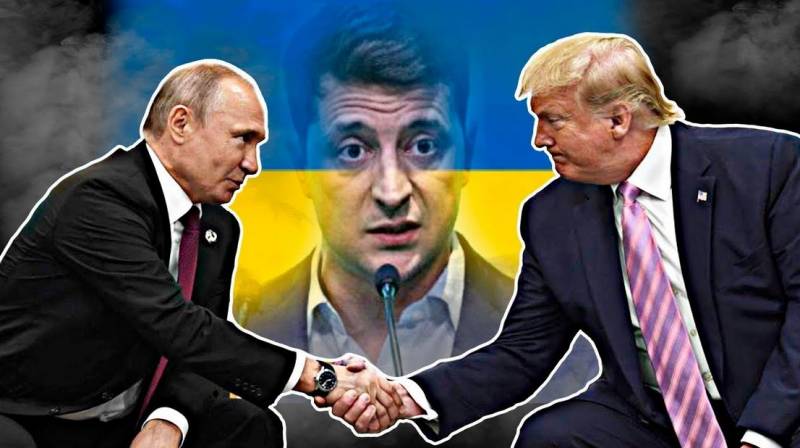 Recent events in Ukraine related to rearrangements in the highest structures of power are quite consistent with the logic of actions of a state that is completely controlled from outside and does not have the opportunity to independently choose its development path. Zelensky, who accidentally became president, far from politics and without his own managerial team, was doomed to the formation of power structures by outsiders.

Power in Ukraine was formed by American Democrats

And so it happened. The team of Zelensky was formed by curators from the United States, and Kolomoisky also somehow participated, putting his man at the head of the president’s office. Trump's team was busy with internal issues and basically did not interfere in the affairs of Ukraine. The formation of power structures under the new president involved the irreconcilable opponents of Trump, the Democrats and his enemy in the economic field, Soros, who controls the IMF. Together, they placed their henchmen in key posts. The state was completely subordinated to the “suckers” working not for Ukraine, but in the interests of the Democrats and Soros. One of their main tasks was preparing the introduction of the land market and selling the remaining assets of Ukraine to the hands of international corporations behind Soros.

The fierce confrontation in the United States since 2016 between the elites represented by financial capital and Soros and industrial capital, which brought Trump to power, provoked a conflict in the American ruling class, which has been expanding over the years. Ukraine unexpectedly became involved in this conflict, because of the fact that it had compromising evidence on Trump’s main rival from the Biden Democrats.

When Biden was vice president, he appeared in Ukraine in a number of major corruption scandals. Biden and a number of major functionaries of the Democratic Party and the Obama administration through the Ukrainian company Burisma, where Biden placed his son, laundered and appropriated money allocated from the American budget to Ukraine, without paying any taxes, which is a very serious crime under American law. In Ukraine there is enough documentary evidence of the corrupt activities of the Democrats, and Biden, trying to hide these crimes, put pressure on Poroshenko to terminate the investigation in these cases, he even secured the dismissal of ex-prosecutor Shokin, who opened a case against Burisma.

To all the requests of Trump representatives to Zelensky to complete the investigation of the Burisma case, he evaded a concrete answer and took no action, taking a neutral position with respect to Trump and the Democrats. In addition, the proteges of the Democrats and Soros in the Ukrainian government under the leadership of Goncharuk, Attorney General Ryaboshapka and the head of the Sytnik anti-corruption bureau did everything possible to slow down this matter.

Trump's proposal, which Zelensky could not refuse

The sensational resignation of the government and the Prosecutor General of Ukraine occurred not only because of their complete incompetence and unpopularity in Ukrainian society, there were much more significant reasons associated with events in the United States, to which Zelensky could not help but respond.

The Democrats’ attempt to impeach Trump for allegedly putting pressure on the Ukrainian leadership in January of this year failed. Trump has a real chance of winning the second presidential term, and Biden, the leader in the Democratic Party’s primaries, has become Trump’s most real opponent. In this regard, the dirt on Biden is more than ever necessary for Trump.

It should also be noted that Trump made a hint to Zelensky in a very original way. Under the guidance of personal lawyer Trump Giuliani, a documentary was produced in January this year and launched on American television, which details the corrupt activities of Democrats and Soros in Ukraine. However, Zelensky did not understand the hint and continued to take a neutral position.

Knowing Trump’s vindictiveness, one could have no doubt about his future reprisal against Ukrainian “native” leaders and their president, who did not support him in such a situation. Zelensky, apparently, explained all this, he made the appropriate conclusions and decided to meet Trump and provide him with a murderous compromising evidence against the Democrats. Zelensky decided to become a puppet in the hands of a stronger puppeteer and unquestioningly carry out his will.

Under the pretext of the collapse of the state economy and the lack of anti-corruption results, the incompetent government “sucked” and the prosecutor general were dismissed with a scandal. The procedure for the resignation of the head of the anti-corruption bureau has begun.

That is, Zelensky, confirming his vassal dependence on Trump, began preparations for bringing the Burisma case to its logical conclusion and cleans its surroundings from the proteges and accomplices of its overlord’s enemies.

Zelensky also supported the adoption of the law on the land market, which Soros lobbied for in the interests of international corporations behind him and the adoption of which was conditional on the issuance to Ukraine of the next 5,5-billion tranche of the IMF, which now froze for an indefinite time.

Zelensky's problems on the American and domestic front

The cleaning man is “sucked up” by Zelensky who has no one to select people for vacant posts; he has no bench. He has to rely only on the old oligarchic cadres, who also do not shine with skills in public administration. In place of the prime minister, he considered the possibility of putting people from the old cage - Tigipko or Khoroshkovsky, but apparently did not dare to put strong personalities next to him, and the gray and unremarkable pupil of the Galician nomenclature school of Shmygal became the prime minister. For some reason, they began to consider him Akhmetov’s protege only because he worked for a short time in one of Akhmetov’s structures located in Galicia, and, by his own admission, he saw Akhmetov only on television.

With the permission of the trampists, Kolomoisky and Akhmetov will try to get the maximum benefit for themselves from the tidbits of the Ukrainian economy that the “pigs” planned to give to the Democrats. Any government in Ukraine cannot change anything already, the country's development strategy and priority areas of domestic and foreign policy have long been identified by American curators with the participation of the Ukrainian oligarchy, and they are not going to change it to a different course, contrary to their interests.

As a result of the removal of the “suckers” from power, Zelensky’s relations with the IMF controlled by Soros were seriously complicated, which already doubted that Ukraine could in the near future receive the next IMF tranche, which the economy of Ukraine essentially depends on.

Zelensky will have to solve the problem with OGVZ bonds, the pyramid of which was organized by his people, who were attached by Soros to the National Bank and the Government of Ukraine, who profit from robbing the country at fabulous interest on these securities. Leading international financial institutions have already made recommendations to foreign investors so far to refrain from investing in Ukrainian government bonds as insufficiently reliable in the financial market. In any case, the collapse of this pyramid threatens a catastrophic devaluation of the hryvnia and the collapse of the country's financial and economic system. That is, from the United States and international financial organizations Zelensky expects a lot of unexpected actions with unpredictable results.

Deadlock in relations with Russia

On the other hand, Zelensky’s relations with the Russian leadership, who consider Ukraine a zone of their interests, are also not developing in the best way. Zelensky’s policy towards Russia, as under Poroshenko, remains Russophobic, he continues to make harsh statements against Russia and accuses her of aggression.

In fact, ignoring the decisions of the Paris summit, he continues to insist on the revision of the Minsk agreements and tries to accuse Moscow of frustrating them, since it does not want to establish peace in the Donbas on Ukrainian conditions. His last extravagant statement that he gives Putin a year to fulfill his conditions can only cause a smile, he just can’t imagine who Putin is and who Zelensky is in comparison with him in order to set any conditions for Moscow. Putin’s stance towards Zelensky is becoming increasingly harsh. He already hardly sees in his person the side of the negotiations with which it is possible to negotiate.

Zelensky was under pressure from the United States and Russia, while the pressure from the United States is multidimensional and requires diametrically opposed solutions. Two world powers defend their interests in Ukraine. The interests of the latter do not touch them at all. Kolomoisky and Akhmetov, as it were, lend a shoulder to the president, pursuing their mercantile goals, and at any moment will be ready to surrender it to a stronger competitor.

At the same time, one should not forget that Kolomoisky is a large and prudent player and calculates his moves well. He is trying to blackmail the West with a default of Ukraine if the IMF does not provide loans. This blackmail can have both success and the collapse of Kolomoisky and his entourage with the loss of all their assets abroad if he plays with the Americans.

It should also be borne in mind that in connection with the approaching world crisis and the inevitable division of spheres of influence in the world between the three centers of power - the USA, Russia and China, the Ukrainian card can be played and probably in Russia's favor. Which of the world centers of power will win in Ukraine is still unclear, in any case, Ukraine does not have an independent place there.

We are in Yandex Zen
Ukrainian contradictions under the new president
Situational analysis of the death of the MH17 flight (Malaysian Boeing 777), made on the basis of engineering analysis from 15.08.2014
29 comments
Information
Dear reader, to leave comments on the publication, you must to register.