“If you need Russian, get into your Russia!”

July 26 2012
125
The desire to present their thoughts on language policy in Ukraine and in general the whole situation that has developed over the past 20 years around this issue appeared a few months ago, during the hot battles in our Council. Then I, like any Russian identity person, could not be aloof from the ongoing processes around this particular subject, entered into heated discussions. The fact that the Russian language is in fact being ousted from all spheres of life in public life in Ukraine is not a secret to anyone. Here are instructions for drugs, and the number of Russian schools in cities such as Kiev and my native Chernigov, where there is only one Russian school from 35. 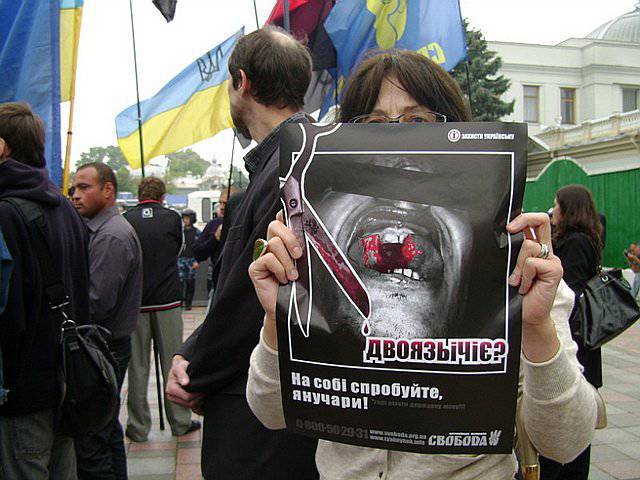 Sometimes repression takes place by far not the most gentle methods, often by forcibly imposing Ukrainian, even, it would seem, the holy of holies for any Russian person — Sevastopol. . It all started when I saw the phrase “Eurovision”: “Guys, did you see what was going on in our parliament this week?”. To be honest, I was in full confidence that, at least in my company regarding myself, I would not hear: “SUITCASE-STATION-RUSSIA”. Oh, how deep I was wrong. Immediately, I would like to make a reservation that all the “discussions” (I put quotes, because it can even be called a dialogue with great exaggeration) were held exclusively in Russian and in many cases with people wearing ethnically Russian surnames. Everything developed around the draft law adopted by Kolesnichenko-Kivalov in the first reading, two “fighters” for the rights of the humiliated. From experience, I will say that any such conversation boils down to any selfish interest - either I’m a German-certified translator, I’ll take some of my work, or that the documentation will be in two languages, which will increase the cost of the budget, ect. However, at the same time, exactly how the work will be taken away remains a mystery to me. About budget money in general, Hochma is the whole country with crosses and monuments to the victims of the famine 1932-33. forced and wondered no one, that this lot of money goes. But in the Russian language - no, no.

This time something happened that I could not have expected. The best friend's girlfriend, who largely identifies herself with the Russian, but at the same time is to a certain extent a patriot of the Ukraine, ended her speech with the phrase “If you need Russian, put it in your Russia!” You understand how schizophrenia has reached the people ? People sit with Russian surnames, communicate in Russian, and one says “Suitcase-Station-Russia” to another. I have a brain discord at such moments! There are still interesting options, in principle, too, in my opinion, easily diagnosed. Communicating with people, one can hear phrases in the spirit: “I grew up in a Russian-speaking family, I studied in a Russian-language school, and in general I have Russian roots, but I believe that in the state of Ukraine there should be one state language - UKRAINIAN”. In general, as for me, the clinic is full, which smacks of fascism. Based on this logic, Australia should have Australian language, Zimbabwe language Zimbabwe, Monaco Monaco, etc.

But what is most interesting in this situation is that the adopted bill lowers the status of Russian from the language of international communication, equating it to regional, and at the same time either 15 or other regional languages ​​that Ukraine uses from the strength of 16% of the population . Can you imagine to what extent the hypocrisy reached both the power and the so-called opposition, when some, actually lowering the status of the language, report on the protection of the rights of Russian speakers, others instead of celebrating victory yell about the danger to the “socialist fatherland”. Truly speak about our state as a state of absurdity!

Author:
Maxim Lipatnikov, Born in 1983 in the glorious city of Chernigov, Ukrainian SSR. In 2005, I graduated from university. By education an accountant, I work as a clerk in Sberbank of Russia. On weekdays I work and live in the hero-city of Kiev.
Originator:
http://www.odnako.org/blogs/show_19897/