Amendments to the Constitution: for which all this was conceived 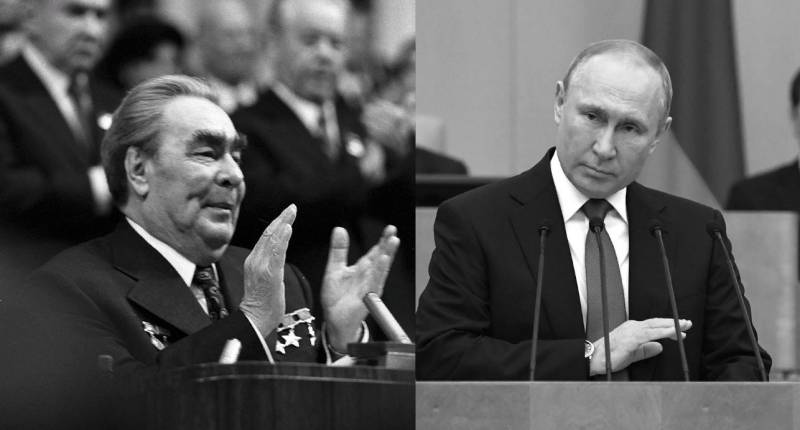 The State Duma today in the third (final) reading adopted the proposed amendments to the Constitution. We are talking about the same set of amendments and additions to the Basic Law of the country, which will be submitted to a universal vote on April 22.


Voting in the lower house turned out to be memorable: not to say that it was completely “in one fit”, but - judge for yourself: 383 lawmakers - “for”, “against” - nobody. 43 “thinkers” decided to abstain - they have such a “tough” position.

Meanwhile, in Runet mention of the word "Brezhnev" has become more frequent. Citizens felt some kind of frank feeling of deja vu - as if just recently, relatively recently, something similar to what was happening was already experienced, seen, already embodied - with known consequences. "Stay, dear father." "Who, if not you." "The people have the right to decide for themselves, but the people ask." If directed, so indefinitely. If there are conditions for a referendum, then it’s conditionally indefinite.

On the podium - an honored man, in a strict suit, in his years, with a gold star of the Hero of the Soviet Union, the space explorer. Well, does anyone argue with a statement and a rational proposal printed on paper and made by such a person? .. Well, does anyone dare to go against the idea of ​​a man who, in 1977, thanked the party, the Central Committee and personally Leonid Ilyich for the new Constitution , which "reflects concern for Soviet toilers."

On the eve of the 60th anniversary of the Great October Revolution, referring to the draft Constitution, we, Soviet women, not only recognize our rights, but also clearly see our responsibilities as full members of socialist society. With new enthusiasm, we will work in the name of the prosperity of our great Motherland, actively participate in the implementation of the magnificent plans for building a communist society in our country.
On TV screens - no less wonderful and respected people. Conductors, directors, heads of Duma factions and others, others, others.

And everything, as in the recent recent reports about “zinger” pensioners (about 75-year-old grandfathers - fitness trainers, about 80 grandmothers, diving under water and / or parachuting), just as convincingly, they also clearly state ... We have, they say, stability now, but the enemy ... ENEMY! .. He does not sleep. We are supposedly at a difficult point in our stories, and all the other difficult points of this very story can not be compared with the current one - just what the coronavirus is ... Imperialists and exploiters are forcing to increase oil production and drop the ruble exchange rate. They strangle workers, peasants, pensioners and the intelligentsia with their vile sanctions. And there is only one way to counter this. Of course, the presidential terms are canceled, because the political and legal norm is as follows: amendments to the Constitution can and, of course, need to be interpreted solely as a new milestone, beyond which Russia and the entire Russian people will expect prosperity. Zeroing the presidential term - this is the number one amendment, something for which all this was conceived.

Until that moment, the Russian people were seriously discussing the proposed amendments to the Constitution, naively believing that all this was undertaken with the aim of improving the Basic Law: the ban on the rejection of territories, the emergence of the status of the Russian people as a state-forming one, family, children, motherhood, and the protection of pensioners. But from the transcendental heights, all the naive were quickly lowered to the sinful earth: all this is, is, is present, but is not at all a goal. The goal was set the day before - in the format of a meeting within the walls of the State Duma, where President Vladimir Putin personally arrived.

Vladimir Vladimirovich himself told those present that he personally, of course, was for developed democracy, for the succession of power. And then he reminded of the deservedness of Valentina Tereshkova ... And then - the main thing. From the series: we ourselves are, as it were, against, but if the Constitutional Court so decides, we will only have to submit.

And so that the picture was in full accordance with 1977, all had to get up and stormy, incessant applause, passing, of course, into a standing ovation, to meet this statement. But here the picture turned out to be somewhat crumpled, as stormy applause was not organized. The Presidium "slammed", part of the hall - too. Well, okay. The main thing is that the message has been sent: the guarantor of our Constitution as a whole agrees with the proposed amendments ... Well, how could one go against the Hero of the Soviet Union, the glorified first woman in space. So the president could not. - Everything is in the hands of the Constitutional Court, everything is in the hands of the people.

And if all this moves to what Valentina Vladimirovna insists on, having recently celebrated her 83rd birthday, then the question arises: are they familiar with the history of the Fatherland in the power structures? Well, not with the one that has been since 1999, but at least a year since 1981. Leapfrog, political crises, squabbles for power, undercover games, open intrigues that followed after March 1953 and after November 1982 - forgot? Have you forgotten what ultimately happened after 1985, when as a result of leapfrog and “premature” deaths Mikhail Sergeyevich Gorbachev came to the post? The same one, because of which millions of people were divided by borders, and millions completely disappeared in the depths of perestroika and post-perestroika chaos.

Well, if you forgot, then it turns out that the country and people are once again preparing for transfer to a field with a rake for intense dancing in history.

Although on the other hand, there can be no fears for supreme power and stability in the country. Why? Yes, because everything is constitutional here ... and political elites may well make an additional amendment to the Constitution - for example, about the eternity of the head of state. And that is because on the eve of the Duma they already said that if the amendments are adopted, it "will allow Vladimir Putin to work quietly these 4 years, not thinking that there after 2024." Well, if the matter is trite in the peace of an individual person, then an amendment about eternity would raise the level of this peace to the beyond ... But this is the problem: human nature is not determined by the Constitution. It is not determined even by the most deserved of honored people - laureates, professors, heroes and drummers of labor.

If in such an amount of time the government was unable to build a system of changeability, if for all that the number of contests "Leader of the Year", "Presidential Reserve" is not at least any worthy person, in order not to transfer all the fullness of power at once, then at least to ask him a development vector, then just remember right again about the need to change something at the conservatory.

I frankly do not want to believe that the power system is going to go over to the well-known thesis that “there is at least a flood after us”. Just based on the fact that the ark being built may not be for everyone ... Bothov representatives of the truly correct electorate, and they won’t be taken, so don’t be zealous ... Although they may hope that by 2036 there will be a successor. Well, at worst, it will be possible to amend accordingly ...

We are in Yandex Zen
What you didn't want to know about England
Functional stupidity and national stupidity
403 comments
Information
Dear reader, to leave comments on the publication, you must to register.