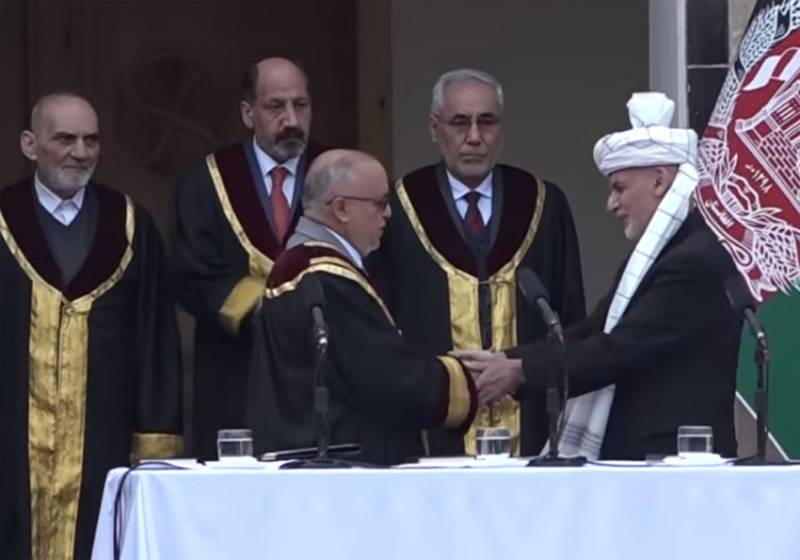 Ashraf Ghani, acting head of Afghanistan, was sworn in for Kabul on Monday for a second presidential term. Parallel to this event, Afghanistan's Prime Minister Abdullah Abdullah held his own inauguration as President of the country.

This is the second time that the main candidates for the presidency of Afghanistan have not been able to agree on the results of the elections. Six years ago, the Americans reconciled them. Under pressure from Washington, Ghani and Abdullah then agreed to form a government of national unity together.

The signing ceremony between the politicians was broadcast live on Afghan state television. According to that agreement, Ashraf Ghani took over as president of the country, Abdullah Abdullah - head of government.

Abdullah again did not recognize the results of last year’s elections, accusing Ghani’s team of fraud. The tabulation process dragged on for a good five months. In mid-February, it ended. Ashraf Ghani, who won 50,64 percent of the vote, was officially declared the winner of the election. Prime Minister Abdullah was counted by 39,52 percent of the vote.

This time, the Americans failed to reconcile Afghan politicians. US Special Representative for Afghanistan Zalmay Khalilzad spent Sunday and Monday night in talks with the teams of Ghani and Abdullah. He even achieved a personal meeting of both politicians, but failed to compromise.

In the end, the Americans made their choice in favor of Ghani. Zalmay Khalilzad, NATO forces commander Scott Miller, foreign ambassadors, representatives of international organizations took part in his inauguration ceremony. In total - four thousand guests, including an impressive delegation from neighboring Pakistan, which included 17 leading politicians of the country.

All of them had to endure unpleasant moments when two rockets exploded near the presidential palace of Arg in Kabul. One of them damaged the car of Vice President Donis Sarvar. Ghani was even forced to interrupt his inaugural speech for a while.

This peculiar “salute” to the new president showed: Afghanistan has not come out of the political crisis caused by last year’s elections. Moreover, Abdullah also did not spend his inauguration in an empty hall. Several thousand of his supporters came to the alternative inauguration of Abdullah Abdullah to the Sapedor Palace. Among them are the leader of the influential party “Islamic Society of Afghanistan” Salahuddin Rabbani, the leader of the Islamic Party of Afghanistan Karim Khalili, members of parliament and representatives of the clergy.

The United States stated that they strongly opposed the parallel government in Afghanistan. This sounded loud, solid, but in Washington they were embarrassed to say that the current American administration also contributed to the Afghan tear.

It says: the United States and the Taliban (banned in the Russian Federation) are striving for "positive relations with each other." Secretary of State Mike Pompeo, who was present at the signing ceremony, urged the Taliban to “break ties with al-Qaeda and support the fight against the Islamic State” (both organizations are banned in Russia.).

According to Reuters, the United States and its allies pledged to withdraw troops from 135 military bases in Afghanistan within 5 days. Completely foreign troops will leave the country within 14 months. In addition, the parties agreed to exchange held persons and lift US sanctions from members of the Taliban by August this year.

In response, the Taliban gave the Americans guarantees that Afghanistan "would not become a haven for terrorists," and the radical movement itself would "begin peace negotiations with the government in Kabul." Experts were skeptical of these guarantees, remembering that the Taliban controlled the whole country from 1996 to 2001 and did not abandon their plans to return to power in Kabul.

Moreover, the Taliban leaders did not recognize Ashraf Ghani as the country's president. They consider Ghani to be an “American puppet” and did not accept his inauguration, as well as claims to Abdullah Abdullah’s power.

Given the fact that the peace agreement between the US and the Taliban was signed without the participation of official Kabul, the Taliban, in fact, have their hands untied with respect to government forces. Indeed, for Washington, the main thing is that the radicals do not interfere with the withdrawal of his troops and do not attack the American military, who already lost more than 1900 people killed and more than 20 thousand wounded during the war in Afghanistan.

Official Kabul, weakened by public dual power, is now unlikely to be able to restore order in the country. We know that the Afghan government has always been extremely fragmented according to national, clan, tribal and even religious grounds.

All this was fully manifested in the confrontation between the Pashtun Gani and the Tajik Abdullah. In addition to them, there are other clans in Kabul with their economic and political international ties. They split up the interests of the elites before the monolith of the radical Taliban. It is possible that he can again get the main prize of Afghanistan - power in Kabul. At the very least, dual power will contribute to this.

So the "boiling Afghan boiler", as experts like to say, again raises the degree of its temperature. This process carries risks for other countries in the region.

We are in Yandex Zen
"IG" in Afghanistan. Will the war come to Central Asia?
John Kerry ordered Afghans to recount votes in elections
30 comments
Information
Dear reader, to leave comments on the publication, you must to register.