An attempt to "rehabilitate" the 90s - who needs it and why 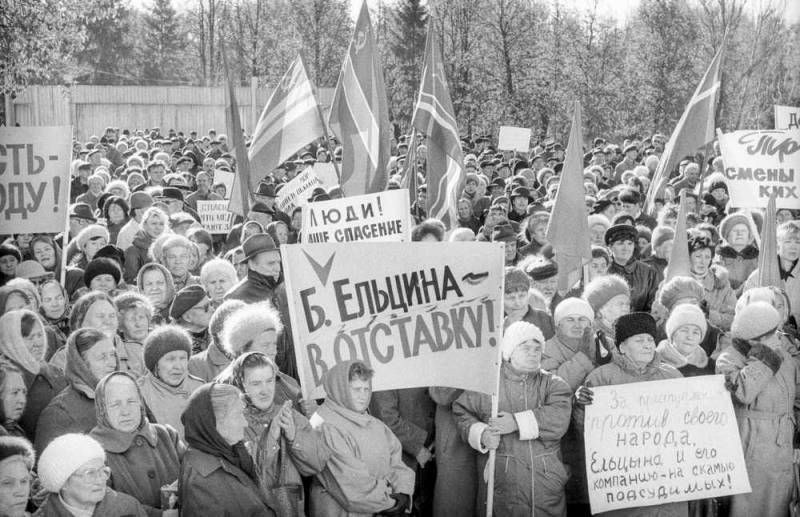 It is amazing how sometimes human memory is short. Including - and with respect to things and events, it would seem, not so long ago, at the same time absolutely not allowing double interpretation. The reason for once again thinking about this paradox may well be the ongoing attempts of certain individuals to "rehabilitate" the "saints of the 90s" in the eyes of Russian society, which the vast majority of our compatriots recall with pain and anger.


Especially “touches” by the fact that with such things (as well as the sweeping blackening of the Soviet period stories of our country) sometimes people who are engaged in those times which they take with a huge aplomb to judge and disguise either have not yet been born, or were at an age that can hardly be considered mature and giving the right to categorical assessments. Take, for example, the next representative of the domestic “creative intelligentsia,” naturally referring to its liberal-democratic “wing” - Oleg Kozyrev. This gentleman, positioned as a film director, video blogger and even a writer, recently noted a speech in social networks, which immediately caused a real storm of emotions. For the most part - purely negative.

Kozyrev, born in 1972, on Twitter deigns to say that the 90s, it turns out, were the “peak of power” in Russia. According to him, they were marked not only by the "economic upsurge", but also by the "development" of art, moreover - "science, education and business." Our country was in the “Big Eight” and “headed the CIS”, “political stability” reigned in it, there were no wars (!!!) and in general there was complete grace complete with the accompanying air-conditioning. It turns out that Boris Yeltsin “handed over” to the current president just earthly paradise, and not a country, all of whose achievements over the past two decades have been mediocre “profane”. It’s clear whose fault it’s ...

Modern innovative achievements are a wonderful thing. They allow the authors of such "revelations" to carry out their "stuffing", while avoiding significant damage to their own health. To say that people were shocked, indignant, and seething with indignation - to say nothing. In the end, Kozyrev had to convince the enraged users that it was nothing more than a joke. Or, as it is fashionable to say now, “trolling”.

What kind of jokes are there? For a very specific group of people, “perestroika” and the subsequent dark and terrible period of plunder and destruction of the country is the standard of the “triumph of freedom and democracy”. The fact that the "triumph" was imaginary, and even more so, the price paid by Russia for all this, they do not care. On the contrary, they really want to repeat all this! Beggarly salaries, total unemployment, rampant crime, which readers remind Kozyrev, like "fair-faced" gentlemen, "take out the brackets", not stooping to such "plebeian" trifles. Shooting from tanks they see the White House in the center of Moscow as the “inevitable cost of democratizing society,” and the hardest and bloody campaign in Chechnya is something like an exciting military-sports game “Zarnitsa”. They definitely did not participate in it ...

Kozyrev enjoys the resulting effect, which he calls the "Putinists brain explosion." Well, this proves that they at least have something to explode. However, those who today so diligently produce false stories about “free and wonderful” life in that period of our history, which can be equated with the other most difficult and tragic trials that befell Russia and its people, are also not so brainless as it may seem at first glance. They are trying to conduct their subversive work quite consciously, not without a clear intent and selfish interest.

But they definitely don’t have a heart. And it is precisely because of their own cold and calculated heartlessness that such an audience is eager to plunge Russia into the new 90s, with all their “charms”. Then they lie ...

We are in Yandex Zen
About Stalin and Khrushchev
What you didn't want to know about England
511 comments
Information
Dear reader, to leave comments on the publication, you must to register.