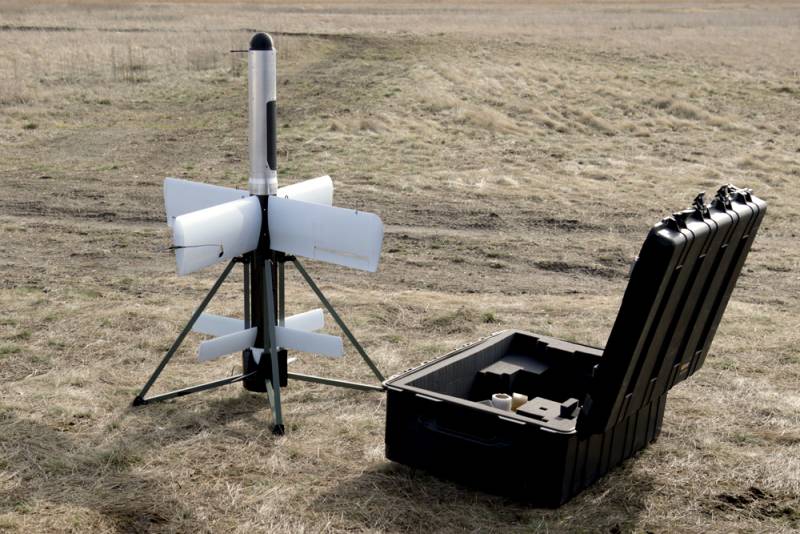 Barrage ammunition is gradually conquering the arms market around the world and becoming more widespread and effective. weapons. Work on the creation of kamikaze drones that hit targets with an air attack is underway in many countries around the world. A modern kamikaze drone is a small-sized aircraft equipped with some explosives. When a target is detected, such a device automatically becomes a homing projectile and hits a ground target.

In Russia, the Kalashnikov concern is actively working in this direction, having presented its barrage ammunition last year KUB-UAV. Great successes in this direction were previously achieved by Turkey, which most recently massively and efficiently used new weapons against various military equipment of the Syrian army. Ukrainian companies are not lagging behind the development of such devices. So, in early March 2020, the Ukrainian media reported on the next tests of the Grom barrage ammunition, for the development of which the specialists of the Atlon Avia research and production enterprise are responsible.

The features of all modern ammunition barrage is the ease of production and relatively low cost. The small size of the vehicles allows drones to remain very difficult targets for radar air defense systems, and their massive use poses a great threat to both the ground forces and the air defense systems themselves. The main purpose of the barrage of ammunition is the defeat of manpower, land and surface military equipment, as well as engineering fortifications and individual enemy targets.

The private manufacturer of the Atlon Aviation Scientific Production Enterprise is one of the main suppliers of unmanned vehicles for the Ukrainian army. Over the past few years, the company handed over to the Ukrainian military about 300 unmanned aerial vehicles of its own production. One example of a successful development, which is adopted and actively operated, is a multifunctional unmanned aviation complex A1-SM "Fury", which is mainly used for reconnaissance and adjustment of artillery fire. It is known that the company is trying to enter the international market. Atlon Avia has already participated in a tender in Pakistan and is negotiating possible supplies of products to Indonesia. 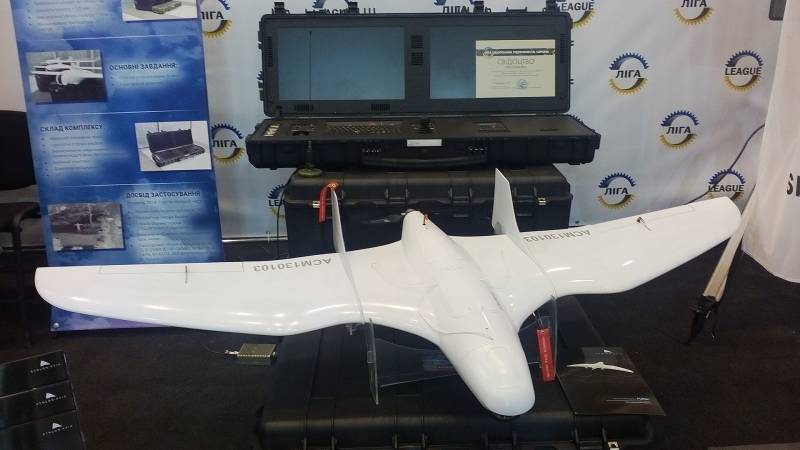 UAV A1-SM "Fury"
In early March 2020, the company conducted another test of its new development - the Thunder barrage. This kamikaze drone is also known under the designation ST-35 (Silent Thunder, "Silent Thunder"). The name of the ammunition for potential foreign buyers is fully consistent with the capabilities and characteristics of such devices. According to representatives of the Atlon Avia company, the new ammunition is quiet, inconspicuous, but at the same time formidable. The flight of the barrage of ammunition occurs in silent mode at an altitude of more than 500 meters. Visually detecting a small fast-moving target from the ground is very difficult.

Recently conducted tests of the Thunder were completed normally. The developers managed to establish the work of automation, so the launch was fully automatic without intervention in the human process. Also during the tests, the ammunition confirmed its estimated flight speed. As noted by Atlon Avia, the launch was the second using a multicopter.

During the tests, the barrage of the ammunition produced the planned ascent into the air. At a given height, the regular separation of the ammunition from the multicopter took place, the flight itself on the given route also passed in the normal mode. During the tests, the process of automatic tracking of the target and imitation of a dive on a detected ground target were worked out. After completing the tests, the Thunder ammunition returned to the launch pad, landing with a parachute. Such a landing solution is implemented only at this stage, the combat version of the device will not be equipped with a parachute. 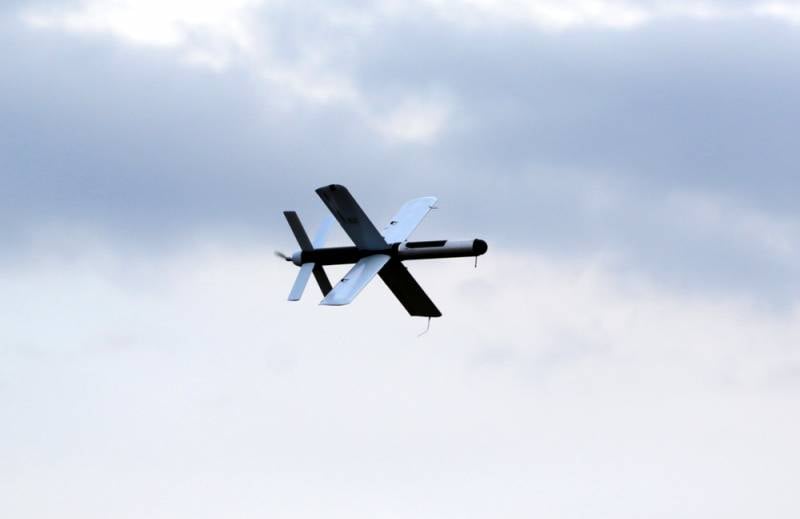 Characteristics of the “Thunder” ammunition

According to the assurances of the developers, “Thunder” is a very competitive kamikaze drone with good flight performance. The cruising speed of the drone is 120 km / h. It is noted that this speed should provide the device with an approach to the target area at a distance of 30 kilometers in about 15 minutes (data are given for normal meteorological conditions). The total time spent by the barrage of ammunition in the air is not more than 60 minutes. These results were confirmed during the Thunder flight test.

As noted by Atlon Avia, the Grom barrage ammunition spends about 15-20 minutes on approach to the target, after which it can be in the target area for as many minutes. And even with a strong headwind and adverse weather conditions, spending 40 minutes on a flight to the target, the device will still have enough time in reserve to complete its mission.

The declared take-off weight of the barrage of ammunition is 10 kg, of which a little more than a third - 3,5 kg fall on the warhead. The manufacturer has already said that the Thunder will be equipped with three different types of warheads: thermobaric (the weight of the warhead is indicated for it), high-explosive fragmentation and cumulative. In the future, the developer expects to realize the possibility of directional detonation of the warhead for his kamikaze drone. 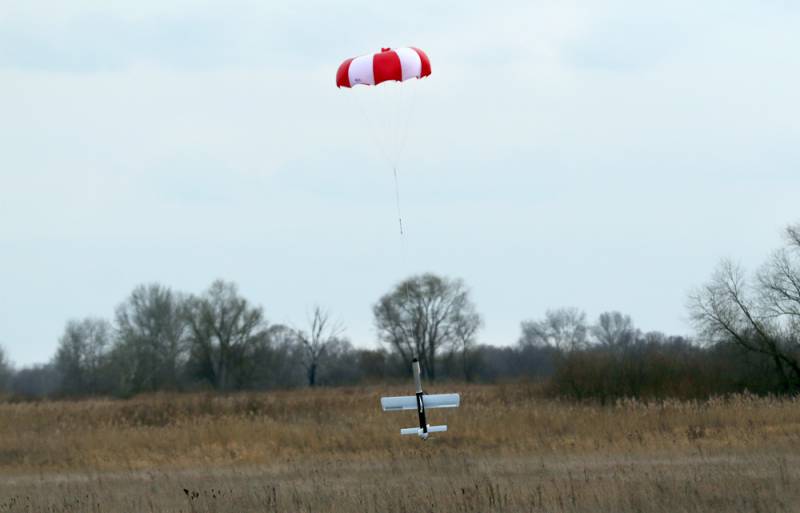 Barrage ammunition "Thunder" on the tests, photo: ArmіyaInform
The effective operating altitude of the Thunder is from 800 to 1200 meters. The stated probability of hitting a target is 0,95. The declared circular deviation is not more than three meters. The calculation of the complex is three people. The complex includes three barrage of ammunition that can be carried in conventional tactical backpacks. The deployment time of the entire complex on the ground is no more than 15-20 minutes. Due to its low weight, the complex is characterized by good mobility, while the calculation may not even use vehicles, moving around the battlefield for two. At the same time, there is the option of placing the complex on the basis of a car chassis, the choice of execution options remains with the military.

For their ammunition, Ukrainian designers chose the standard scheme for many modern missiles with an X-shaped arrangement of the wing and rudders. The wing is located approximately in the middle part of the ammunition fuselage, and in the bow there is an optoelectronic target guidance unit. There, in the bow, there is a warhead. The total length of the ammunition is approximately 300 mm, the width is 90-100 mm. The kamikaze drone body is made of modern composite materials (glass and carbon fiber), which provides the product with low weight and good strength characteristics. At the rear of the apparatus is a piston engine with a pushing screw.

The aerodynamic scheme chosen by the developers is a compromise and meets the solution of two main tasks of the ammunition - it provides high aerodynamic qualities in horizontal flight and good controllability during the hover and dive phases. According to the experts of Atlon Avia, the chosen scheme is almost the only possible one, which is why it is also used today by other developers of ammunition around the world. According to the company's engineers, it is not possible to achieve a target with a circular probable deviation of 2-3 meters with a classic aerodynamic design when diving.

A distinctive feature of the “Thunder” ammunition is its launch model. Initially, Ukrainian designers considered options using a pneumatic or flexible catapult, but quickly realized that this solution complicates the operation process, increases the complexity of the launch and the cost of the device itself. Currently, the launch of the barrage of ammunition is carried out using a multicopter (which then also serves as a repeater). The implemented Thunder launch system is a comprehensive solution that effectively solves several tasks at once. Firstly, the complex can be launched from any site, even of very limited sizes, even from the courtyard of a residential building. Secondly, the weight of the complex is minimized, ammunition and launch vehicles are able to carry one fighter. Thirdly, the reliability and ease of use of the complex is growing. 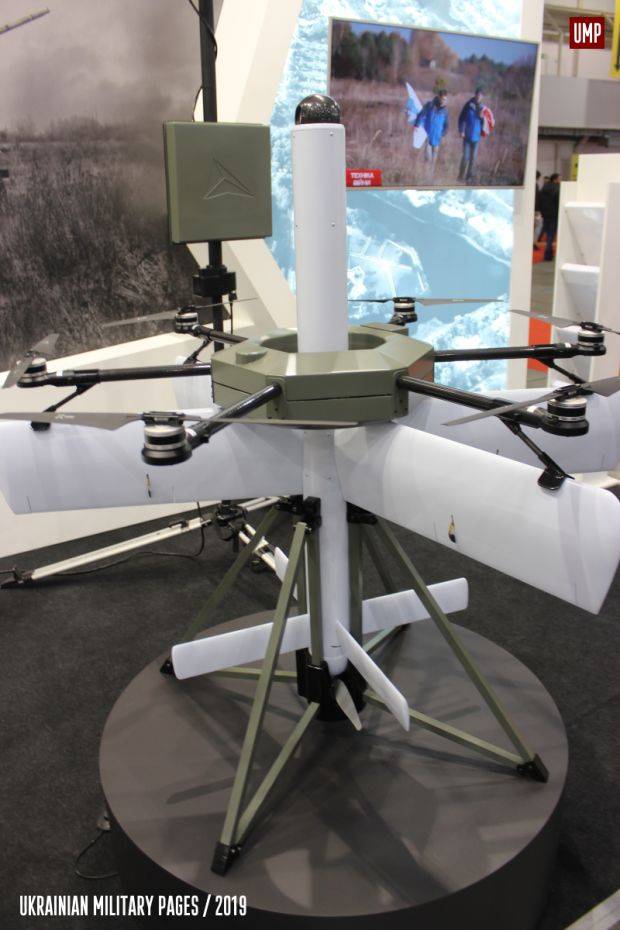 Thunder Barrage Ammunition
During launch, the multicopter raises the barrage of ammunition to a height of approximately 500 meters, after which the projectile is disconnected from the copter and continues to fly independently to the designated area. At the same time, the multicopter itself rises to a height of about one kilometer and remains in the sky, starting to play the role of a repeater. The climb is enough to maintain a stable connection with the barrage of ammunition at a distance of 30-40 kilometers. At this range, a stable video signal is supported, which allows you to control the process of hitting detected targets.

According to the developers from Atlon Avia, the automatic targeting system on the ST-35 Silent Thunder is implemented through an infrared or thermal imaging channel. It is noted that the homing target is variable, depending on the meteorological conditions, the operator of the complex will decide on which guidance system is best to use at a given time. It is noted that the operator takes part in the destruction of ground or surface objects until the moment the target is identified and confirmed - after the barrage, the ammunition begins to work offline and hits the target in a dive.

Another distinctive feature of the complex is the fact that it was originally created taking into account the fact that navigation using GPS or GLONASS systems in the combat area is often ineffective. Therefore, the barrage of ammunition is as independent as possible from GPS positioning. This is especially true when combat tasks have to be solved in the face of active opposition from enemy electronic warfare equipment.

We are in Yandex Zen
UAV "Demon". Statements are loud, and prospects are dubious
FireScout UAV (VTUAV) Tactical Unmanned Aerial Vehicle - MQ-8B
53 comments
Information
Dear reader, to leave comments on the publication, you must to register.