Dresden bombardment: how the British and Americans annihilated the capital of Saxony 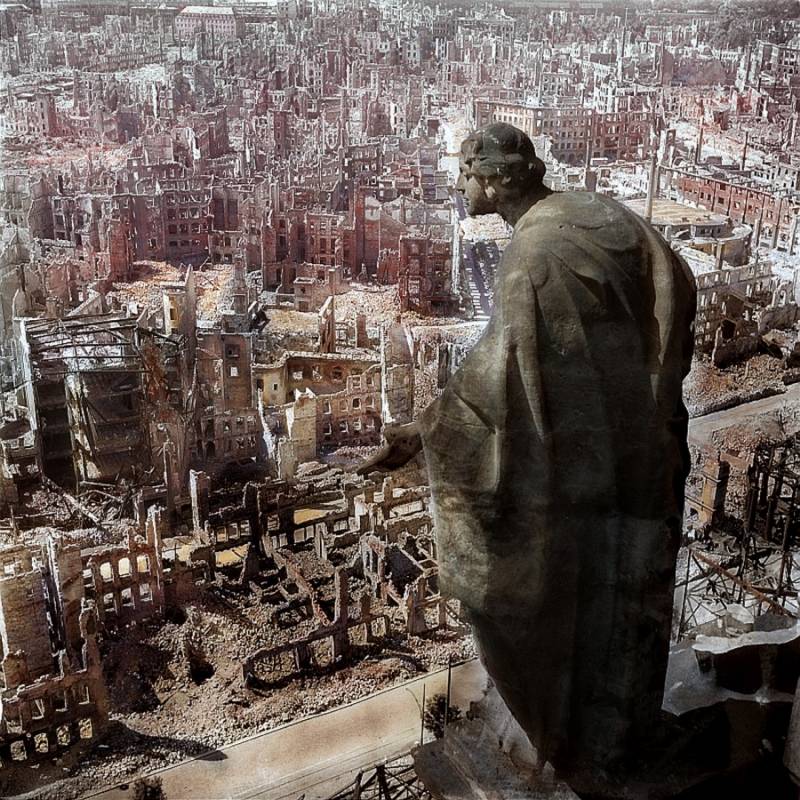 For most of the war, the city of Dresden existed quite calmly. We can say in "resort" conditions - while aviation Hamburg devastated the allies and bombed Berlin, the capital of Saxony lived peacefully.

Dresden, of course, was bombed several times, but as if resembling it and not very seriously. The attitude to the bombing in the city was so frivolous, and the losses were so moderate that in Dresden there was an active trade in fragments of bombs - they say, there will be a souvenir, as well as what to tell grandchildren. The city "hurt" so easily that entertaining excursions were arranged on the bombing sites.

The reason for this was geography. Dresden is located in the depths of German territory - it is difficult to reach from both England and the Mediterranean Sea. No, it’s possible, of course, to fly, but it’s not easy, especially with a large group. Fuel for long navigational thoughts is not enough, and there are many large cities with impressive air defense along the way - no, no, but someone will be brought down along the way. Well, on the way back, too. 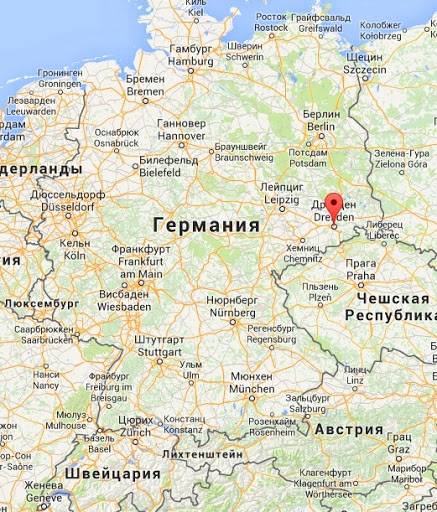 As you can see, reaching Dresden is not so easy
But by the beginning of 1945 the situation had changed. The bombers received an order - in anticipation of demonstrating support for the Eastern Front. Sending hefty “Lancaster” and “Flying Fortresses” to bomb accumulations of equipment and individual objects was stupid. And then they decided to work on something large - for example, a transport hub. And while not yet seriously attacked, Dresden was a pretty obvious choice.

Hands from the right place


Fortunately, the order coincided with the growth of the capabilities of the bombers. At the very beginning of the war, the same British in the bombing business reigned complete confusion and vacillation. The situation when each crew was given a separate task, and he independently chose the route, was normal. In such circumstances, it was not easy to simply hit a target like a “big city” with a bomb - after all, the British, unlike the Americans, flew at night, when there was less chance of being shot down.

In the arrows, they generally recruited anybody — any airport personnel, and almost civilians among the acquaintances of the latter.

After some time, the command grabbed his head and streamlined the bombing process. They began to select the best crews that most accurately reached the target, leading the rest out there. To increase the effect, they threw incendiary "bomb markers" indicating the area to be bombed. 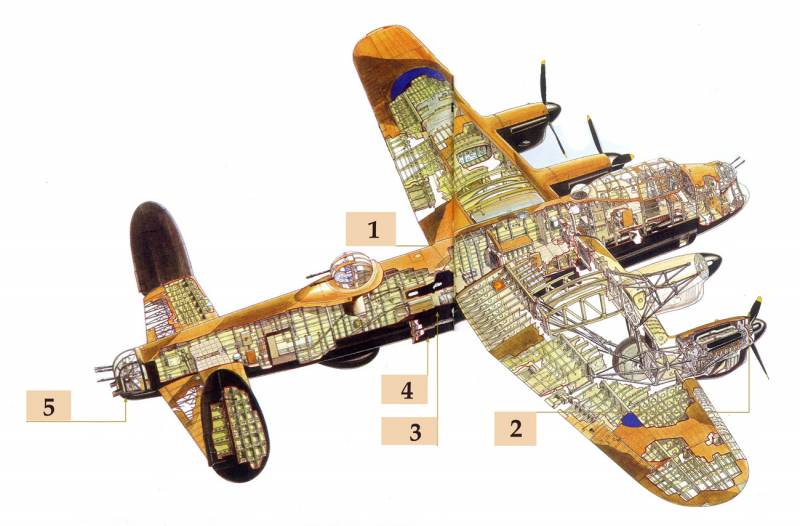 Lancaster Bomber
The Germans, however, quickly found themselves, lighting their markers somewhere outside the city in order to confuse the bombers. But this was answered by a whole system of signals - “pathfinders” (“pioneers”), dropping “markers”, carefully monitored the enemy’s activities and marked false targets, firing rockets of different colors.

By the beginning of 1945, British aviation was at the peak of its form — it had the necessary material parts — that is, a lot of four-engined Lancaster cars. And experience - the organization of raids over the years of the war did not even take a step, but just soared above itself.

And the Germans, who had already managed to get a lot of clutches firmly, looked unimportant. The exploded industry could no longer produce everything necessary, observation posts for raid alerts in some Northern France were lost along with the latter. From a distant complex goal, Dresden turned into a very promising point of application of efforts.

The incendiary bombs widely used in raids were scary weapons. Of course, they worked best in Japan, where the cities were a mishmash of wood and paper — the streets were narrow and the fires spread well.

But in "stone" Germany, lighters had something to hit. If you throw them a lot and tightly in many places at once, you could cause a real fiery tornado. Many neighboring areas where cold and heated air collided caused a series of fiery vortices.

Sometimes people who carelessly went out into the open space, for example, the center of a wide street, were simply picked up by the air stream and thrown into the fire. As if with a powerful invisible hand - witnesses of this kind were hardly destined to forget this. In all this raging horror, it was absolutely impossible to save someone - all that was left was to hide in the basements and pray that you were somewhere near the edge of the raging fire zone, and not in its center. 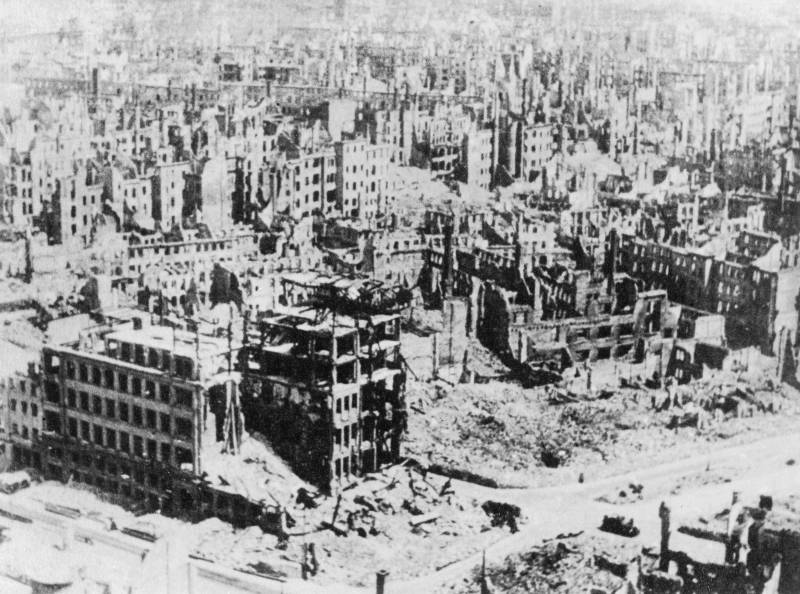 Dresden after a triple raid in February 1945
True, sometimes it was possible to save. There was one dangerous, but effective way - the “water alley”. Firefighters pulled up many, many sleeves, and literally made their way through the fire. So it was possible to advance along some wide street for kilometers. It all depended on the uninterrupted supply of water - if something went wrong, firemen moving through the fire hell would fall into the trap and inevitably die.

Risk was not just. Fire tornadoes did not occur so often (it was necessary to bomb very well and harmoniously), but when they happened, it was a huge problem. First of all, for people gathered in bomb shelters - they slowly died from suffocation. And they could be saved only by punching the road with "water alleys."


Dresden did not manage to smash apart the Yalta Conference - the weather prevented. But this did not save the city - the goal was really interesting, and the preparations for the operation consumed resources, not to cancel after all.

The first wave of British "Lancaster" appeared over the city at 22 hours on February 13, 1945. The stars in the sky of the pilots converged perfectly, so most of the bombs hit the target - that is, it fell within the city. Multiple fires spread across Dresden.

Hearing on the air cries of “help, kill”, firemen rushed into the city from almost all of Saxony. The roads in the Reich were not bad, the area is not so big, and they managed to arrive quickly. Just to get hit by the second wave of “Lancaster” and exit the game. Further, the city burned on its own, without serious attempts to extinguish it, especially since the very fiery tornado began there, putting an end to any attempts to do at least something with limited forces.

And so as not to seem small, at noon, ten hours later, the Americans arrived. "Flying Fortresses" congratulated the population of Dresden on Valentine's Day, dumping bombs on the city. True, they were far from British successes - in the daytime there was disgusting foggy weather, and the lion's share of bombs hit anywhere. For all 3 waves, more than a thousand bombers took part in the case.

The year 1945 was in the yard, and there was no reason to expect serious opposition from the German air defense - the British and Americans lost only 20 aircraft, 16 heavy bombers and 4 fighters.

The burning and littered city for several weeks lost value as a transport hub - the supply of the Eastern Front, of course, did not stop, but became more complicated.

On the German side, many people died in Dresden. The bill goes at least tens of thousands. Most likely, it will never be possible to accurately calculate: in the capital of Saxony, by the time the bombing began, a horde of German refugees from the eastern lands of the Reich managed to accumulate. Estimates of losses among modern researchers fluctuate somewhere at the level of 25-35 thousand, although revisionist-minded publicists can talk about several thousand. 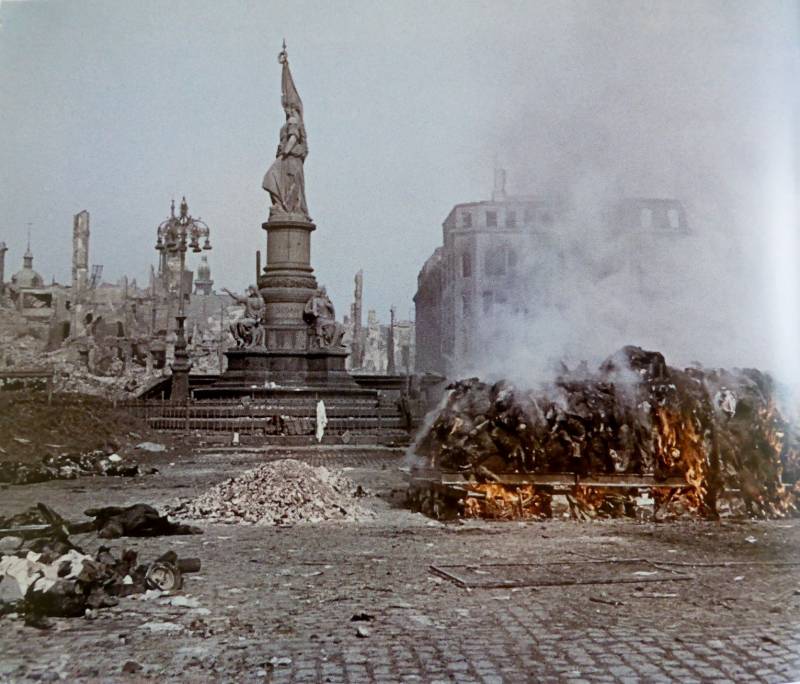 Bombing behind, Germans burn the bodies of the dead to prevent an epidemic
The civilian population of the city, of course, can and should be pitied. But it’s worthwhile to understand that the Germans themselves started this war, and were not distinguished by special humanism. The bombing of Stalingrad in August 1942 was no less terrible - and it is unlikely that any of the population of Dresden particularly lamented it.

After sowing a storm, the Germans reaped a fiery tornado. And paid for it in numerous stories like the Dresden bombing ...

We are in Yandex Zen
Chernobyl notebook. Part of 3
Father told
115 comments
Information
Dear reader, to leave comments on the publication, you must to register.