Zelensky vs. Poroshenko. The political struggle of antagonists in Ukraine 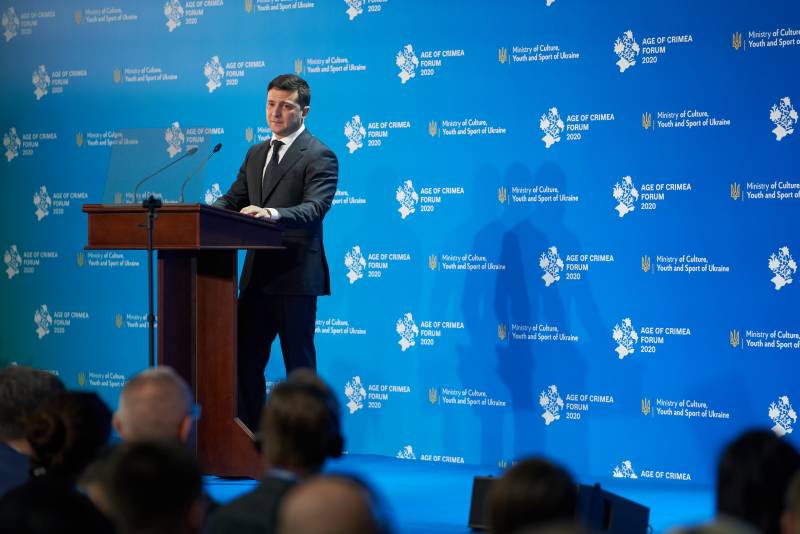 Other experts compare the dismissal of Prosecutor General Ruslan Ryaboshapka, initiated and suppressed by President Zelensky in the Rada, with the turn of the plane of Russian Prime Minister Primakov over the Atlantic, when the West launched aggression against Yugoslavia, the bombing of Belgrade. In general, there are some reasons for this: the seven ambassadors of the West stood up for Ryaboshapka, the whole "big seven", but Zelensky refused them ...

Why was Ryaboshapka given a hat?

President Yanukovych’s decision to postpone the signing of the Euroassociation for six months, in order to take into account Ukraine’s interests more, ended with Euromaidan and the coup d'état in 2014, analogies really come to mind ... And Ryaboshapka himself hinted at this, leaving the rostrum of the Rada: “I am leaving to return”, defiantly refusing to answer questions from deputies.

Ukrainian political scientists believe that Zelensky in this demarche relies on oligarch Igor Kolomoisky, a friend of his Interior Minister and the chief of the Nazi “Azov” Arsen Avakov and the oligarch Rinat Akhmetov who joined them. Ukrainian oligarchs allegedly resist the already declared defeat on the part of transnational corporations in the West. That is, the oligarchy is resisting closer association with the West, its complete digestion, and this puts him, along with President Zelensky, in the position of Yanukovych. And therefore, it resembles the turn of Primakov’s plane over the Atlantic.

"Servants of the people" in the Parliament on Ryaboshapka split, but Oppoblok Medvedchuk - Rabinovich - Boyko helped Zelensky to dismiss him. In Rada, they are opposed, in general, by the camp of ex-president Poroshenko, his party “European Solidarity”. Yulia Tymoshenko's "Fatherland" and the "Voice" of deputy singer Vakarchuk also voted against Ryaboshapka’s resignation in parliament. The power support of Poroshenko are the militants of the “avant-garde of the revolution of hydrology” Dmitro Yarosh, one might say, the new SS division “Galicia”.

Ryaboshapka’s resignation is complemented by the dismissal of the Cabinet of “suckers” led by Prime Minister Goncharuk, the new Prime Minister Denis Shmygal, even from Lviv, but as if from “strong business executives” and worked with Rinat Akhmetov, and not with the structures of George Soros.

Retired ex-head of the presidential administration Andrei Bogdan, who is considered to be Kolomoisky’s man, and in recent events has been seen in defamatory ties with Ryaboshapka, a clear ex-prosecutor general from the “suckers” and ex-president Poroshenko. The commander of the "Azov" Andrei Biletsky is considered Avakov’s man, but now he openly calls for a new coup against Zelensky and, it turns out, Avakov. Again, a series of betrayals, betrayals, defectors began as a foresight of new "events"?

It’s not worth reducing everything to the economy; political ambitions always play a big role. We see a clash of two camps: Zelensky and Poroshenko. Ryaboshapka did not initiate proceedings against Poroshenko, and this was the main reason for his resignation. Zelensky needs to somehow resolve the issue with Poroshenko, at least remove him from the country for a long rest. In the Rada, they shook hands, but Poroshenko called Ryaboshapka’s resignation "pro-Russian revenge."

Obviously, everyone in Kiev is thinking of playing in their favor on the big American split: the confrontation between the leading US presidential candidates Trump and Biden. Behind Ryaboshapki’s resignation, the next blow to Poroshenko is seen, so the latter declares him to be “pro-Russian revenge.”

The development of this topic will lead to the disclosure of corruption cases of Joe Biden in Ukraine under Poroshenko, which is the famous dream of President Trump. Therefore, Joe Biden with his Democratic Party through the “suckers” in Ukraine prevents the fall of Poroshenko in order to put an end to the investigation of his ties. Irreconcilable, antagonistic, one might say, contradictions that should somehow be resolved in the near future.

It seems that Zelensky missed the time when he could relatively easily send Poroshenko “to the bunk”, as he promised. Perhaps in this he was "thrown" by the prosecutor general from the "suckers" Ryaboshapka. Over the past time, the situation has changed: Zelensky’s position has weakened, the situation in the country is deteriorating, the Armed Forces in the Donbas are not very subordinate to Zelensky and his Minister of Defense. It is hard to say how and how their clash will end today.

Biden-Soros’s position in Ukraine remains very strong, the current President Trump, of course, will help Zelensky against Poroshenko for Biden’s neck, but how effective will this support be and will he be able to block the “suckers” in Ukraine? And there is also Yarosh with the "brothers in law" and the Nazi patriots Avakov on the other hand, who have become proficient in the "bloody local history".

... Russia, it is better to stay away from this swarm of Zelensky and Poroshenko: radish horseradish is not sweeter. Not both of them brothers to us ...

We are in Yandex Zen
A great interview with Sergey Lavrov: about Ukraine, Obama and Iran
What you didn't want to know about England
25 comments
Information
Dear reader, to leave comments on the publication, you must to register.