Hide behind the smoke. New technologies for the RKhBZ troops 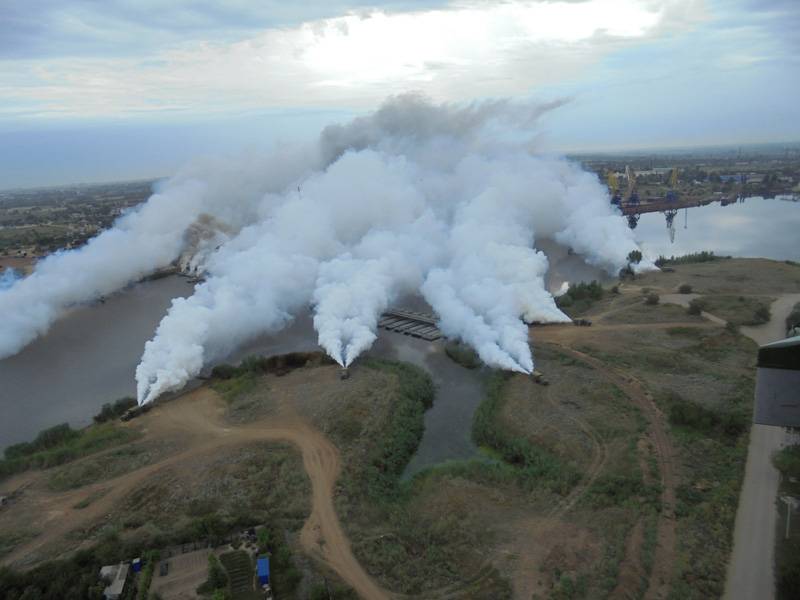 Combined company AEP 27 arr RKhBZ ZVO provides a smokescreen of the floating bridge across the river. Volga in the region of Yaroslavl, August 2017. This episode of the exercises is included in the Book of Records of the Armed Forces of the Russian Federation

One of the tasks of the troops of radiation, chemical and biological defense (RKhBZ) is the disguise of forces and means using a variety of systems and models of equipment. Due to the rapid development of surveillance and detection tools, increased demands are made on camouflage, and therefore new methods and means of protecting troops appear. Some promising developments are already being implemented in the armies of the Russian Chemical Forces and are being tested under the conditions of full-scale exercises.

Not so long ago, at the beginning of February, the press service of the Eastern Military District announced the conduct of exercises of the RHBZ compound stationed in Buryatia. During these events, pilot training sessions were held on setting up “innovative aerosol curtains”. With their help, camouflage of mobile control points was carried out.

A few days later, new reports appeared on the progress of these exercises. With the help of “unique remote-control radio equipment”, the RHB protection compound disguised a large area of ​​troop deployment. The personnel, equipment and various objects were protected from detection by a ground, air and space reconnaissance of a conditional enemy. In addition, the troops were protected by the same measures from precision and laser weapons.

Approximately approx. 100 troops and 30 units of special equipment and weapons were used. All tasks were successfully solved, and promising masking tools fully confirmed their capabilities. It is to be expected that in the near future they will find application in the new exercises of the RKhBZ troops.

The reports of the Ministry of Defense provided some interesting information about the applied models of equipment and other systems. On March 10, Izvestia published new data on the course of the February exercises, in which no less interesting details were present. All this allows us to imagine what masking methods are proposed to be used in the future, and what results they will provide. 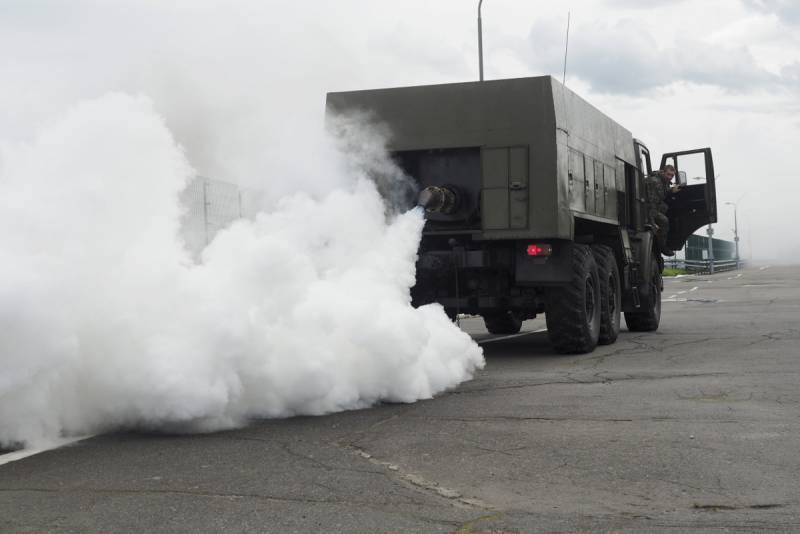 Machine TDA-3 at work
It is reported that at a recent exercise, a full-fledged automated control system (ACS) for the troops of the RCB protection was tested. It includes various means of intelligence and data processing, as well as communication systems for the direct issuance of commands. Such a complex system provides the setting of the most effective curtain in this situation.

Reconnaissance assets associated with ACS are responsible for identifying enemy surveillance systems and determining their type. It is alleged that the detection of ground, air or space reconnaissance is possible. Meteorological data is also collected in the area of ​​work. Using all available information, an action plan is developed. This is followed by a command for curtain systems, taking into account the specifics of the current situation. After that, smoke is directly fired.

RKhBZ troops have a wide range of special equipment and systems for setting curtains. One of the main examples of this kind is the TDA-3 car on a truck chassis. Also used are the so-called aerosol countermeasures placed in a given area. These stationary systems are controlled by the RPZ-8XM electronic control complex.

According to the Ministry of Defense, in February, new types of aerosol-forming compounds were used in the exercises. Composite and polymer liquid mixtures based on petroleum products were applied and tested. Mobile thermo-smoke equipment, such as the TDA-3 machine, using such compositions, can maintain an airtight curtain for 4-8 hours. 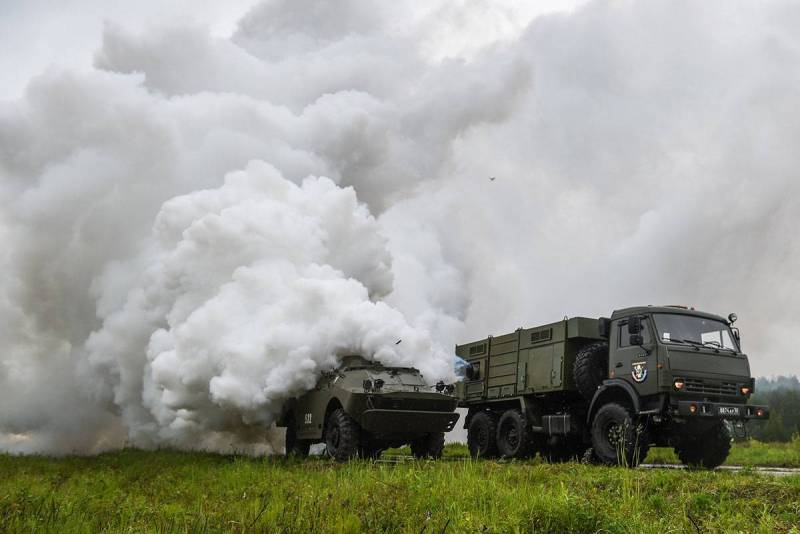 Izvestia clarifies that the RKhBZ troops have at their disposal a wide range of aerosols and additives that provide effective camouflage from various means of observation. So, simple opaque fumes are used to counteract optical reconnaissance from the ground or from the air. Special chemical fillers are added to the flue mixture, blocking the observation using thermal imaging equipment. Radars are prevented from working with finely dispersed metal particles that reflect radiation. It is possible to create combined curtains combining several additives.

Against detection and attack

In recent exercises, new models and systems have been tested and demonstrated their benefits. The positive qualities of the updated masking tools are obvious. Such measures make it possible to promptly identify a threat and disguise troops or another object. Due to this, the enemy will not be able to obtain accurate reconnaissance data and organize an attack. Also, camouflage means can disrupt an already begun blow.

Existing means of setting curtains allow you to cover large areas. In combination with the new ACS and other systems, their quantitative characteristics are complemented by the quality of work. Now camouflage units can identify the enemy and use the most effective means of counteraction.

In fact, regardless of reconnaissance methods, the enemy in all spectra will see only a cloud of smoke - it will not be possible to distinguish individual objects below him. Due to this, the organization of false goals is also possible. The enemy will not be able to determine under what cloud the troops are located, which will seriously complicate his actions.

Smoke screens with different functions are also a convenient means of counteracting modern high-precision weapons. Guided missiles and bombs of ground or aircraft systems use radar, infrared, optical or laser guidance. In all cases, aerosols are able to reliably block the protected object and thwart the attack. 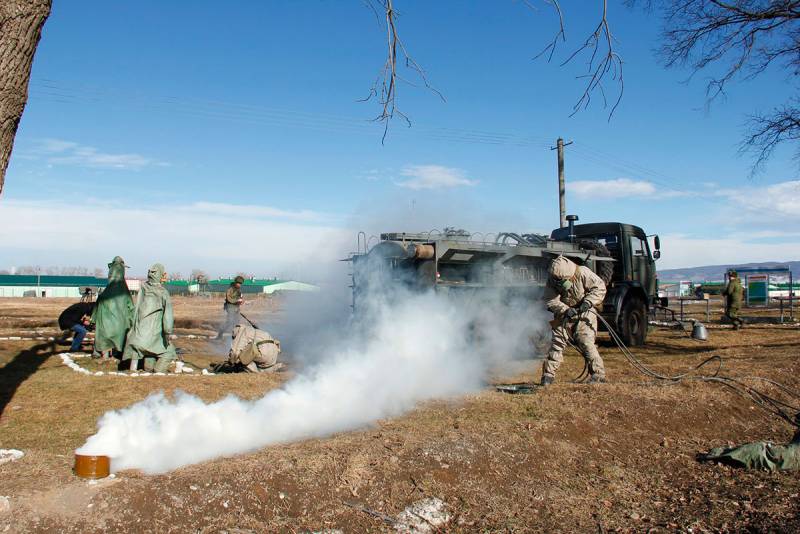 Smoke bomb application
Recent reports of the Ministry of Defense and the press did not reflect the issue of interaction between the automated control systems of the RKhBZ troops and other control systems of the armed forces. The ability to exchange data between different branches of the armed forces can increase the efficiency of all forces as a whole. So, parts of the RBF defense will be able to receive data on enemy reconnaissance assets not only from their sources, and the information from them will be used in planning attacks on enemy systems.

The need to camouflage troops and targets by all available means is obvious. The RKhBZ troops have a wide range of necessary systems and models of equipment that make it difficult to observe the area to be covered or to exclude it altogether. Moreover, such technologies do not stand still and are constantly evolving.

As follows from the latter NewsThe development of camouflage means in the context of setting curtains alone goes in several ways. New aerosol-forming compounds are being created that counteract various reconnaissance means, and in parallel, promising command and control systems for troops, units and subunits are being formed. All these innovations are tested in the conditions of landfills and confirm their wide capabilities.

Thus, old and well-known methods and tools are being developed through new technologies and solutions. This combination of old and new allows you to get all the desired results, which is confirmed by practice.

We are in Yandex Zen
Overview of combat night vision systems from Western manufacturers
Border and perimeters of the base. Do not cross!
31 comment
Information
Dear reader, to leave comments on the publication, you must to register.