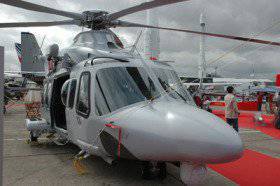 The first Italian helicopters of the Agusta brand will be assembled at a plant in the Moscow region in November of this year. This was announced today at a press conference by Russian President Vladimir Putin following talks with Italian Prime Minister Mario Monti.

According to the head of the Russian state, "in the Moscow region a plant was built for the assembly of Italian helicopters Agusta, the first vehicles will be assembled as early as November 2012 of the year."

Putin also recalled that a joint project is successfully being implemented between Russia and Italy to create a regional Sukhoi Superjet 100 aircraft. He stressed that at the moment the order book for this aircraft exceeds 170 units.

As previously reported, the holding company "Helicopters of Russia" and the Anglo-Italian company Agusta Westland (AgustaWestland) created a joint venture "Helivert" (HeliVert) in Tomilino near Moscow, which will produce AW139 helicopters.

Information about the first AW139 customers of the Russian assembly was not disclosed, however, sources close to the joint venture claim that today there are more than 5 customers for these helicopters. One of them, in particular, plans to transfer 10 of its AW139 to the operation of UTair.