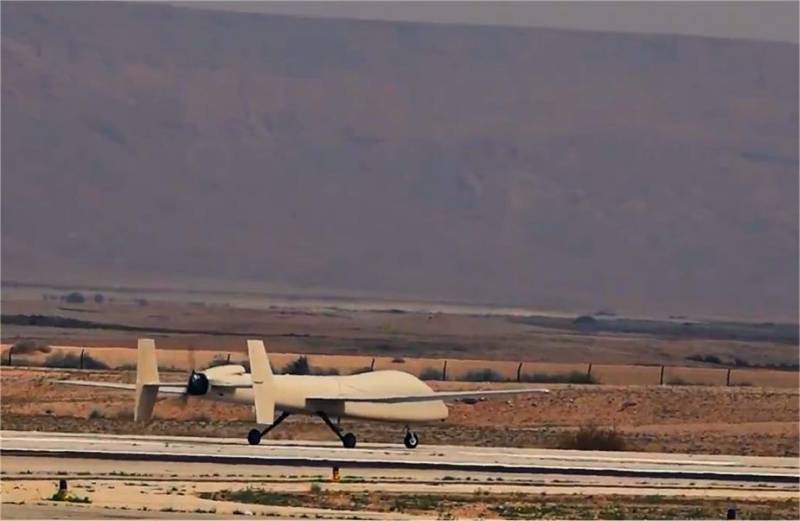 The fighting that took place in Syrian Idlib again attracted the increased attention of representatives of almost all armies of the world to the use of unmanned aerial vehicles capable of performing a variety of combat missions. The military of Saudi Arabia, who recently announced the adoption of a new UAV, were not an exception. What is interesting about this winged car?


This is a medium-altitude reconnaissance drone with an increased flight duration of the Saker-1B. According to available information, the development of this new product for a decade has been jointly carried out by representatives of the American company UAVOS and experts from the Saudi King Abdel Aziz Science and Technology Center (KACST). The “bird” turned out not to be shallow - the UAV has a maximum take-off mass of 1,1 tons and the corresponding wing span is 16 meters. Such parameters are due to the fact that Saker-1B was originally “sharpened” specifically for long patrols in, let's say, not too gentle climate of the Middle East, high temperatures and exposure to sand and dust storms characteristic of deserts.

According to the declared performance characteristics, the UAV can fly at an altitude of up to 5 kilometers, while without interruption being in the air for up to a day. Today, however, the maximum flight duration recorded during the tests is 19 hours, but the developers swear that 24 hours for the Saker-1B is not a problem. The drone has a good range of more than 2 and a half thousand kilometers. However, its main “highlight” is the possibility of completely autonomous actions that do not require constant monitoring and operator participation. The existing control systems allow him to take off completely independently, followed by following the laid route, fixing on the photo and video equipment allotted to him for patrolling sections of the terrain and automatically landing.

To support all these functions, the Desert Scout Saker-1B is equipped with a very advanced satellite communications system, to which the device switches automatically again, it should go beyond the direct line of sight of the ground station from which direct control is carried out. In connection with all of the above, the most probable scope of the new UAV is the protection of oil fields, as well as the transportation routes of "black gold", which constitute the main national treasure of Saudi Arabia. As we recall, last year it was these objects that several times became targets for a variety of attacks, the success of which clearly revealed serious problems with their technical security. Also, according to KACST representatives, the drone can be used for reconnaissance purposes and during search and rescue operations both in deserts and on the sea coast.

Whether this project will be developed, for example, in the direction of creating, based on a sufficiently powerful Saker-1B shock UAV, is still unknown. In any case, after long and picky trials (only flight time of which was one and a half thousand hours), representatives of the armed forces of Saudi Arabia stated that they were completely satisfied with the results and were determined to take this drone into service.

We are in Yandex Zen
Saudi Arabia will open on its territory the production of Chinese UAVs
Yuri Drozdov: Russia prepared the role of the sacrificial calf
35 comments
Information
Dear reader, to leave comments on the publication, you must to register.