Ural-4320: The Difficult Way to Diesel 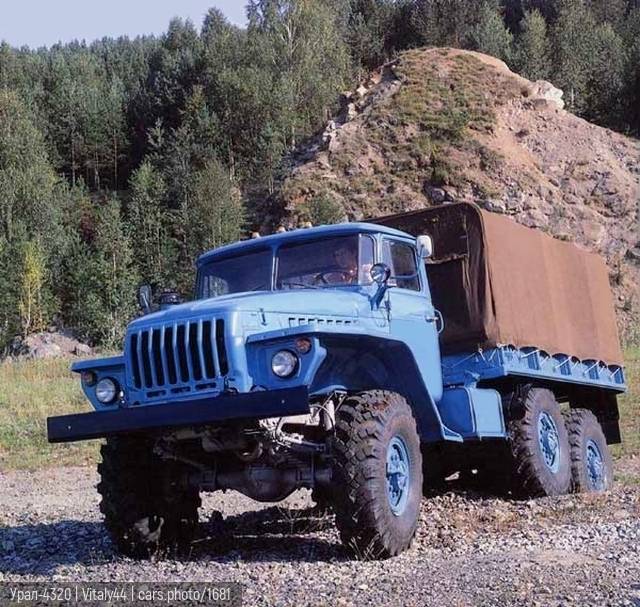 At the time of acceptance of the Ural-375N carburetor, the state commission pointed to the main drawback of the truck - the lack of a diesel engine. From their very birth, the older KrAZs had a YaMZ-238 diesel engine, although still a low-speed, but still, and the Miass all-wheel drive remained gasoline. Meanwhile, theoretical calculations showed that a diesel engine with a capacity of 200 liters. from. It will be more economical than carburetor by 37-50%, increase the average speed by 10-17% and provide an annual operational savings of 500 rubles. All this at a higher cost of diesel engine production - an average of 18-20%. In 1965, in Miass, they tried to install the latest Yaroslavl YaMZ-375 engine with a capacity of 236 liters on the Ural-180D. s., but the entire circulation of these diesels went to the Minsk Automobile Plant. It was not necessary to hope for the expansion of the engine production of this particular power unit in Yaroslavl, and they decided to adapt the promising YaMZ-641 diesel engine for Ural. It was an eight-cylinder V-shaped 160-horsepower engine, which was not distinguished by reliability and a long resource. And most importantly, its power did not provide the necessary supply of energy for the truck, which was required by military customers. As a result, Miass began to develop its own 210-horsepower diesel engine “Ural-640” (V-8) with a working volume of 9,14 liters. 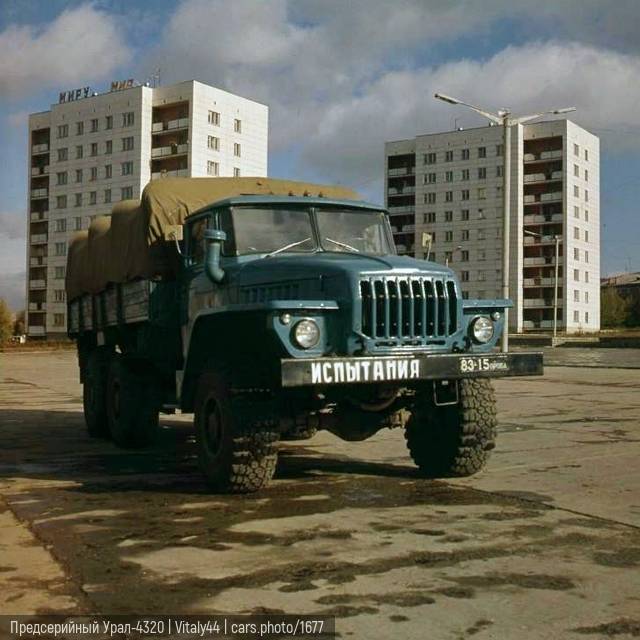 The pre-production car is obviously in civilian performance. Source: ru.cars.photo
All work on the power unit was closed in connection with the construction of the plant in Naberezhnye Chelny for the production of the famous KamAZ-740 engines (250 thousand a year), which are no different in layout solutions from the Miass diesel prototype, only the working volume of the power unit was increased to 10,85 liter. If you try on a new engine on the Ural, it turns out that the diesel engine is 19% less revving than the ZIL-375 carburetor, but 30 l. from. more powerful and its torque is 14% higher. The motor turned out to be immediately 240 kilograms heavier than its predecessor, which changed the weight distribution of the army truck. The motor was developed in Yaroslavl, the first prototypes were called YaMZ-740 and they developed power within 180-210 liters. from. Due to the complexity of the project, at the Yaroslavl Motor Plant, the development of engines for future triaxial KamAZs and Urals was carried out with the support of diesel specialists from NAMI. 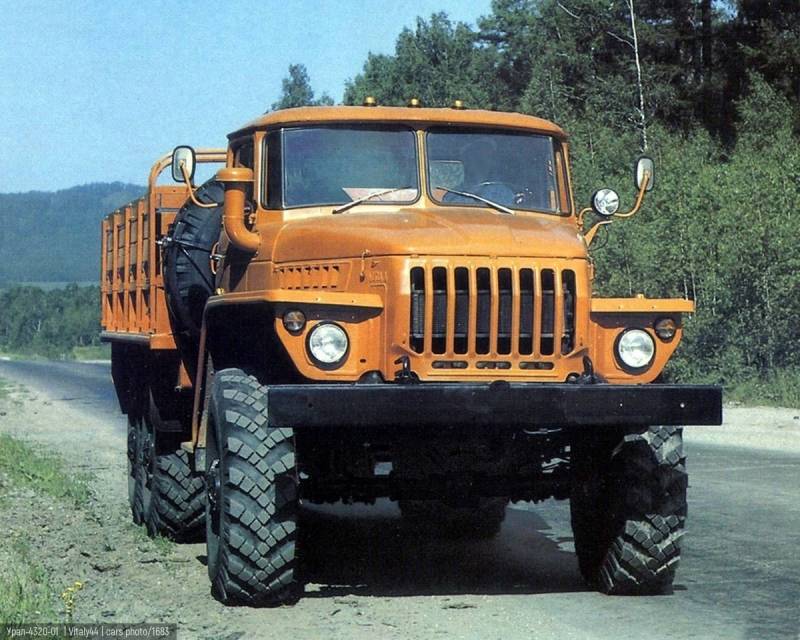 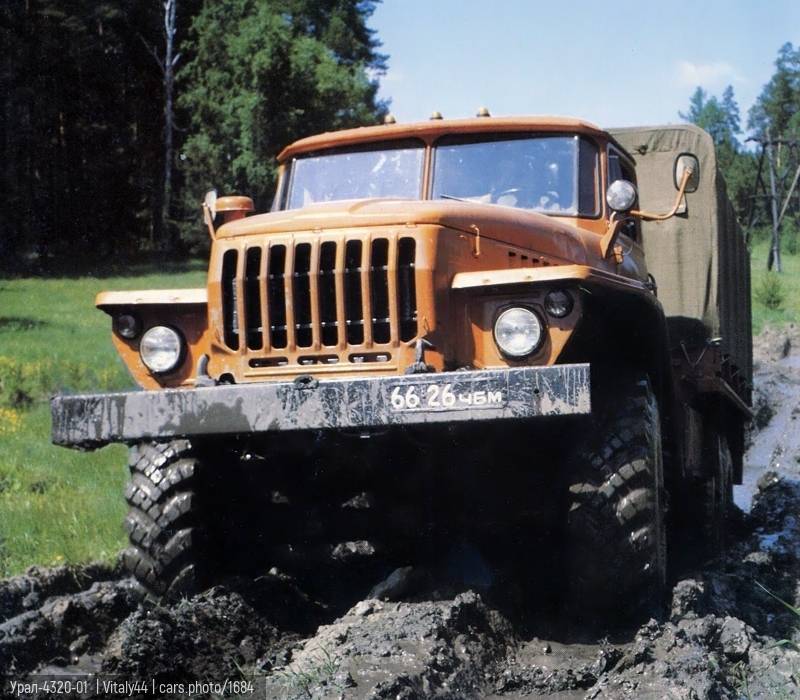 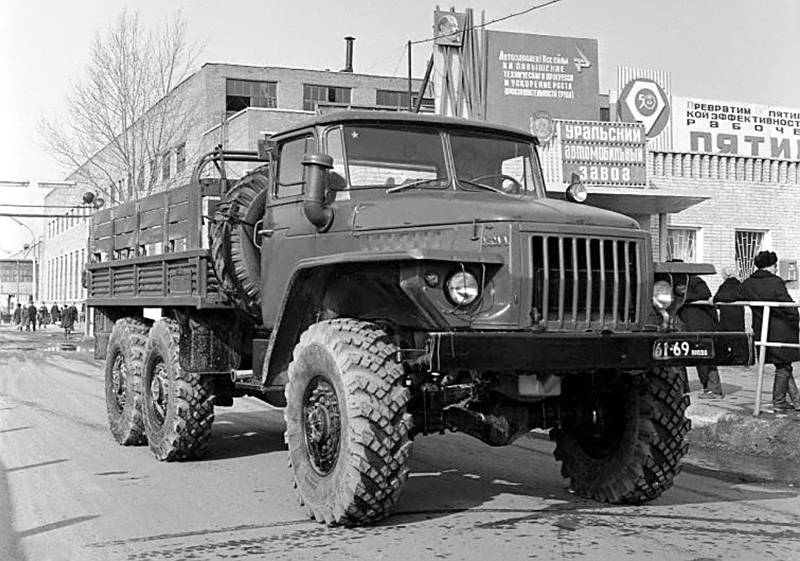 One of the first serial diesel "Urals". Source: autowp.ru 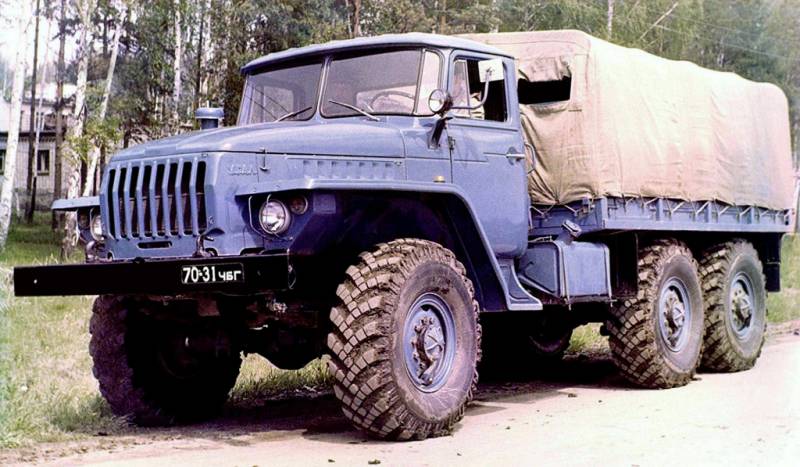 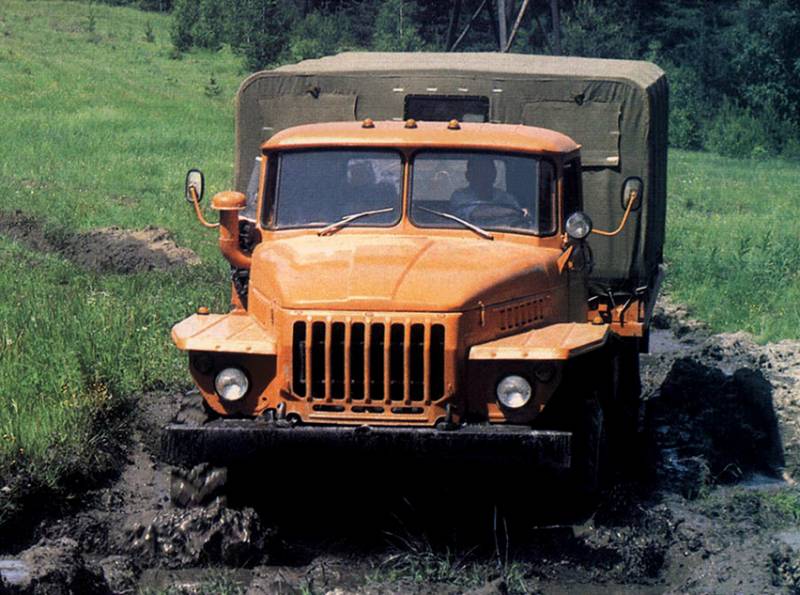 Ural-4320 Source: autowp.ru
In 1972, several trucks with promising engines were built: Ural-4320 (on-board with a carrying capacity of 5,5 tons), Ural-43201 (lightweight on-board with a platform without wheel arches with a carrying capacity of 5 tons), as well as two truck tractor "Ural-4420" and "Ural-44201". Some sources indicate that the first "Urals" with diesel engines from Yaroslavl received the index 34320. Such "Urals" passed during test runs of 60-100 thousand kilometers in the South Urals and the north of the Tyumen region. At the same time, airborne vehicles dragged behind them the massive 7-ton MAZ-5243 trailers, which were not intended for Miass trucks. Tests have shown the reliability and high resource of Yaroslavl engines, but at the same time, the need for modernization of part of the Ural units and assemblies has emerged. 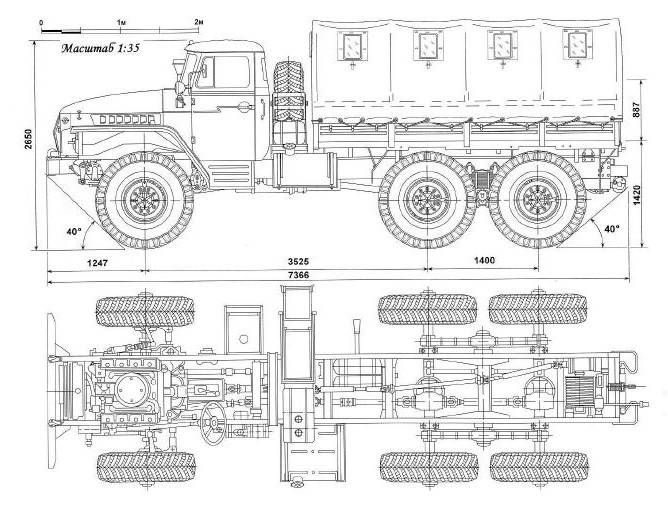 Source: Military Vehicles
Compared to the carburetor, the motor became less revving, but more powerful, and this required a change in the final drive ratio from 8,90 to 7,32. In another case, she could not withstand increased loads. The heavy weight of the motor required the restructuring of the frame (a cross member appeared in front), the front suspension and the installation of new 254G-508 wheels with toroidal landing shelves. Also, according to the test results, they strengthened the clutch and finalized the transfer case. The new engine was not only heavier, but also larger than the carburetor predecessor, which required a change in the design of the radiator lining. As mentioned above, the heavy motor changed the weight distribution of the car - now the front axle accounted for 32,5%, and the rear bogie 67,5%. Ural-375D had an underloaded front axle, which accounted for only 29,3%. All this, coupled with increased power, improved the patency of the diesel Urals in soft soils.

According to the western patterns

The new YaMZ-KAMAZ-740 diesel engine was good for everyone: powerful, economical, its resource exceeded 170 thousand kilometers, but it was chronically lacking for Miass trucks. Since 1977, the Ural plant was on the sidelines before the main consumer of engines KamAZ, which is gaining strength. It is at this moment in stories diesel "Urals" could happen a radical change, consisting in the transition to air-cooled engines. In many respects this was facilitated by the country's leadership, fascinated by the Bamov Magirus-Deutz engines with Klockner-Humbold-Deutz AG (KHD) motors. The operating results of Czech Tatra trucks, also equipped with diesel engines, were also positively assessed. In the most severe frosts after the change, Magirus and Tatra did not require tedious draining of water from the cooling system, and they were also easier due to the lack of a radiator, pump, thermostat, pipelines and hoses. It is worth making a historic retreat and returning to 1970, when the test run of several Ural-375s with German Deutz F8L413 diesel engines with a capacity of 210 liters was organized in the Soviet Union. from. 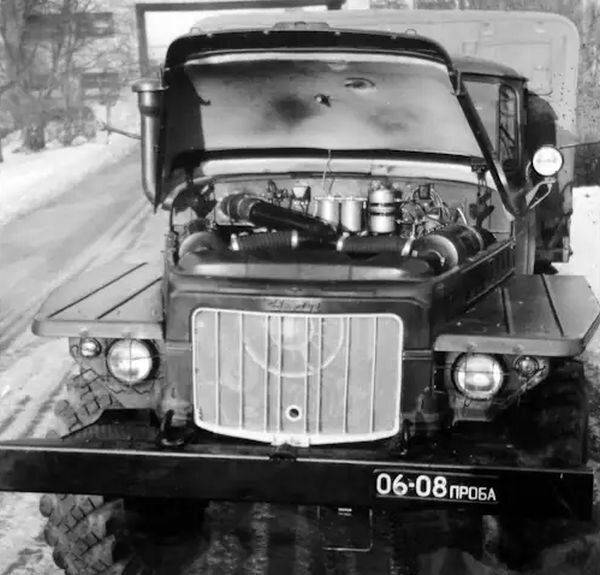 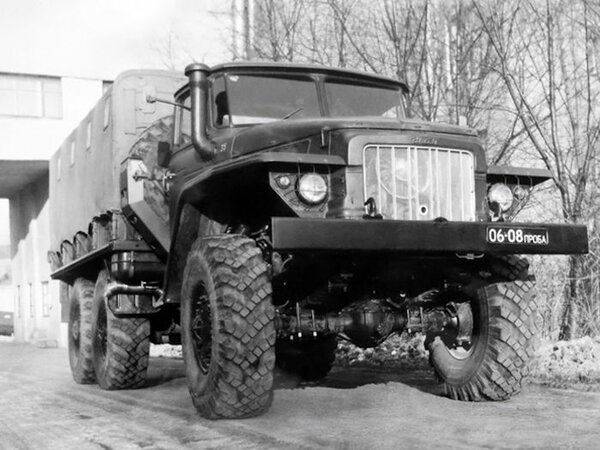 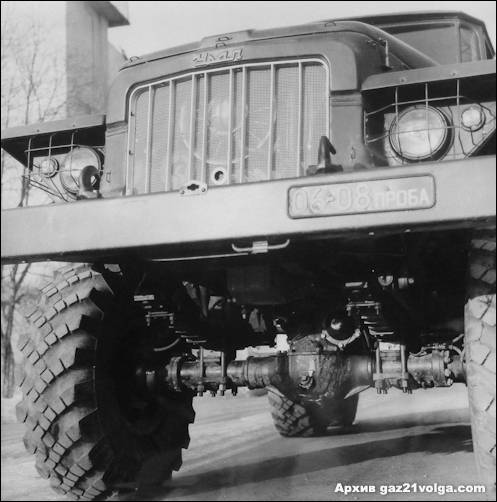 Ural-375D with Deutz F8L413 air-cooled diesels. 1970 year. Source: gaz21volga.com
In addition to the Urals, air-cooled diesels were mounted on the GAZ-66, ZIL-130 and 131, MAZ-500 and GAZ-53. Light trucks were powered by Deutz F6L912 engines. After analyzing the situation, it was decided to develop, together with West German experts, two lines of diesel air-cooled engines - work on the younger family was assigned to the Gorky Automobile, and the older to the Ural Automobile Plant. In the first case, the diesel engines were supposed to be installed on the GAZ-66, and in the second - on the family of modernized Urals under the code “Susha”, which will be discussed in the following materials of the cycle. Miass's problem was that the plant located in the city was not very large and was not ready to host the motor production. Therefore, it was decided to build in Kazakhstan an enterprise specializing exclusively in F8L413 diesel engines under the brand name “Ural-744” - the Kustanai diesel plant (KDZ). This plant was built for a very long time and only in 1992 released the first engines, and two years later went bankrupt, having managed to collect only 405 engines. So “Ural” lost forever air-cooled diesels, which, however, should not be upset - this technical area of ​​development is currently more marginal than common. And the Ural-744 engines were already technically and morally obsolete models by the mid-80s.

With all the external similarities, the diesel Ural has a lot of differences from the carburetor 375th model. A new “KAMAZ” gearbox appeared on the car, the 12-volt electrical equipment was replaced by a 24-volt, and the interior of the cab was largely unified with the KAMAZ-4310 family. Due to the increase in traction capabilities, the Ural-4320 could now tow a trailer weighing 11,5 tons, and the maximum speed increased to 85 km / h. The first modification was 4320-01, equipped with reinforced cardan shafts, steering and a 120 mm raised loading platform. Also in the factory production line was present “Ural-43203” - a special chassis for mounting add-ons for various purposes and, of course, weapons. It was on this base that the Grad multiple launch rocket system was built, which became one of the symbols of the Ural trucks. 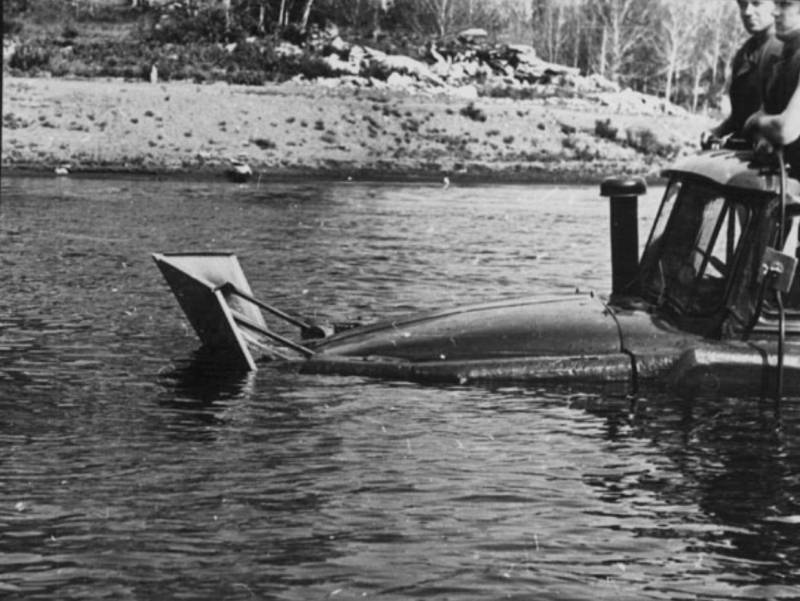 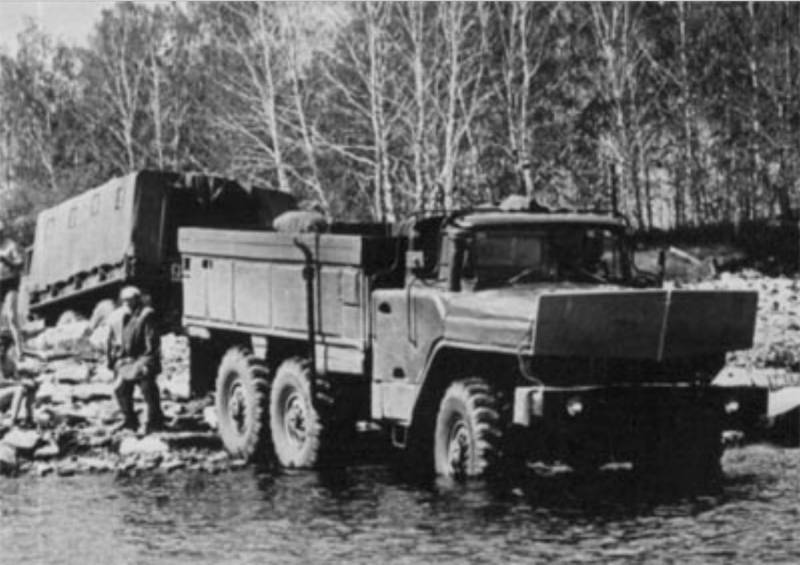 Ural-4320P is another absurd attempt to make an amphibian out of a truck. Source: ru.cars.photo
I must say that in the 70-80s, up to 60% of all products of the car factory in Miass was taken by the Ministry of Defense. At the same time, not only the classic Ural-4320 airborne and chassis based on it, but also vehicles for the national economy, joined the army. So, the 7-ton national economic “Ural-43202” with a wooden platform with tilting sides on three sides and devoid of a pumping system for wheels was also purchased by the army for work on public roads. 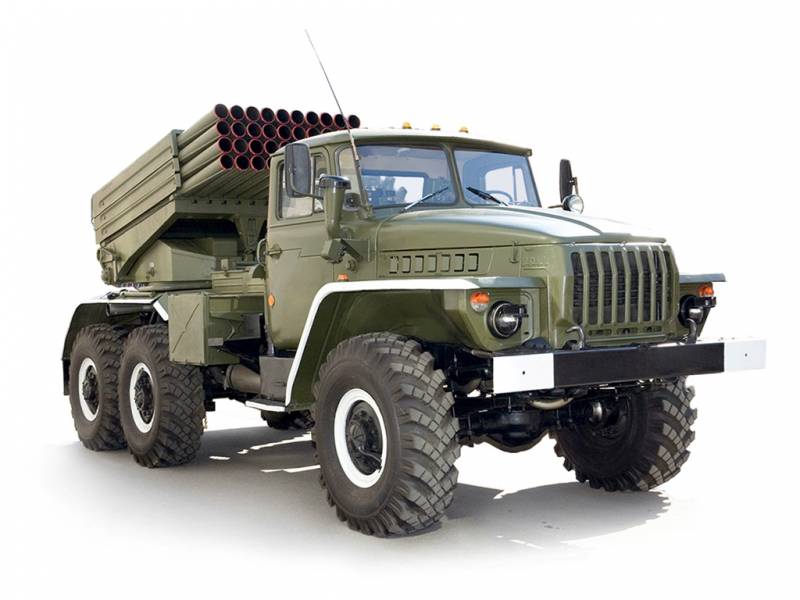 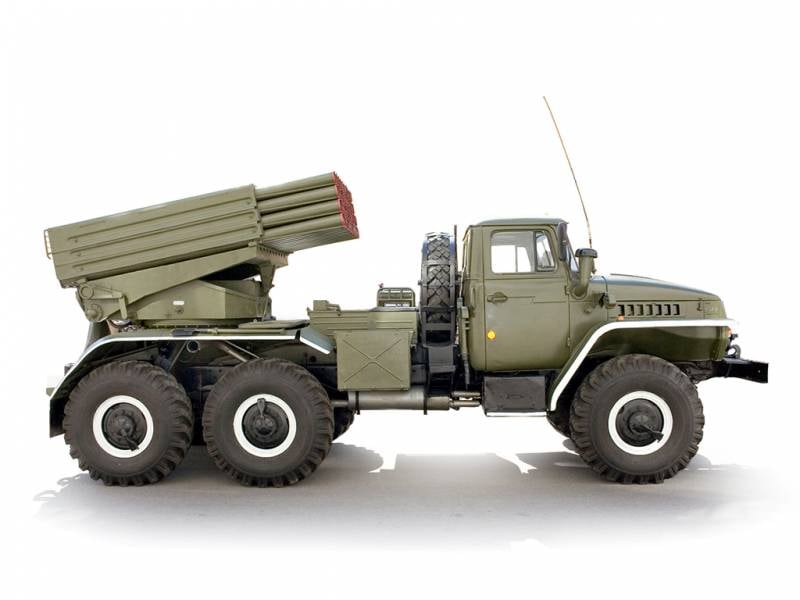 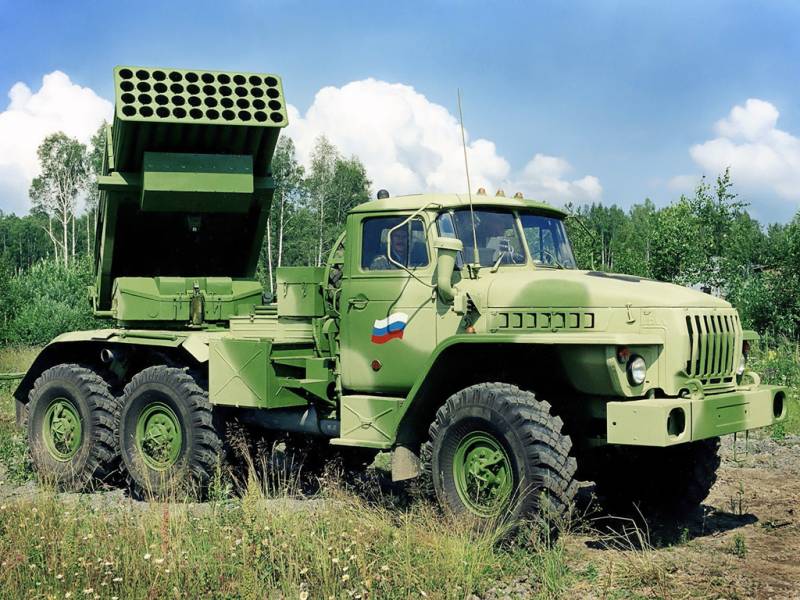 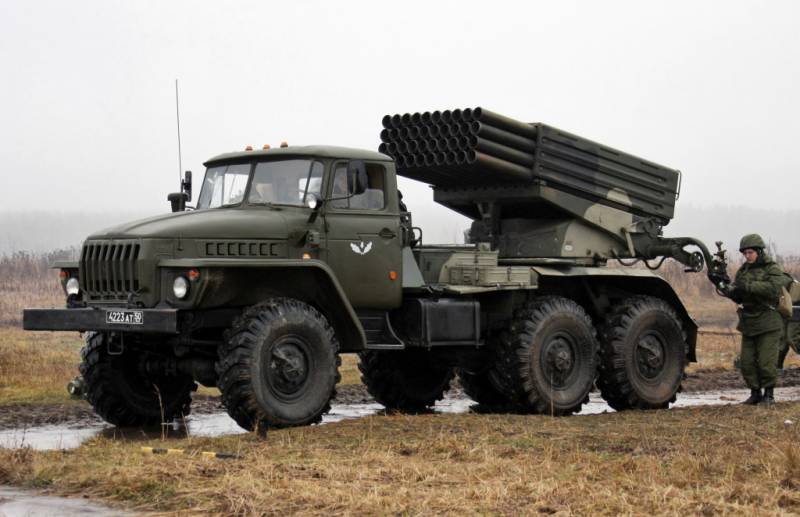 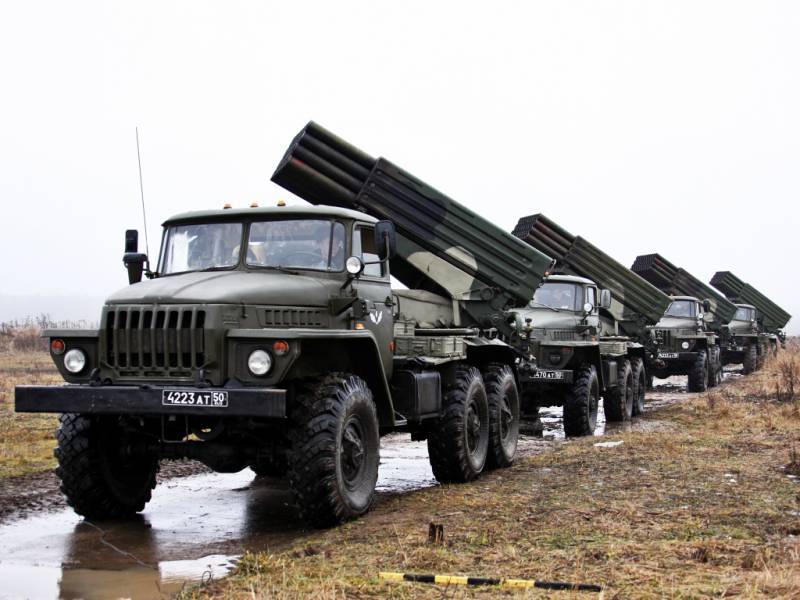 The BM-21-1 combat vehicle MLRS 9K51 on the Ural-4320 chassis is probably the most famous Ural with weapons. Source: autowp.ru
The Ural-4420 civilian tractor unit was also in demand, which was adapted for towing 15-ton army semi-trailers. Broad unification with the previous carburetor model allowed the army to simply rearrange equipment on the new diesel Urals. Among other things, the trucks from Miass received sets of special railway tracks that allow the car to move along the railway track. Such "Urals", developing 6,5 tons of tractive effort on iron wheels, are used in shunting work, for feeding track links under tracklayers, as well as in transporting personnel and cargo. Also in the long list of options you can highlight the car with the index 432001-01, designed for the northern regions of the country. 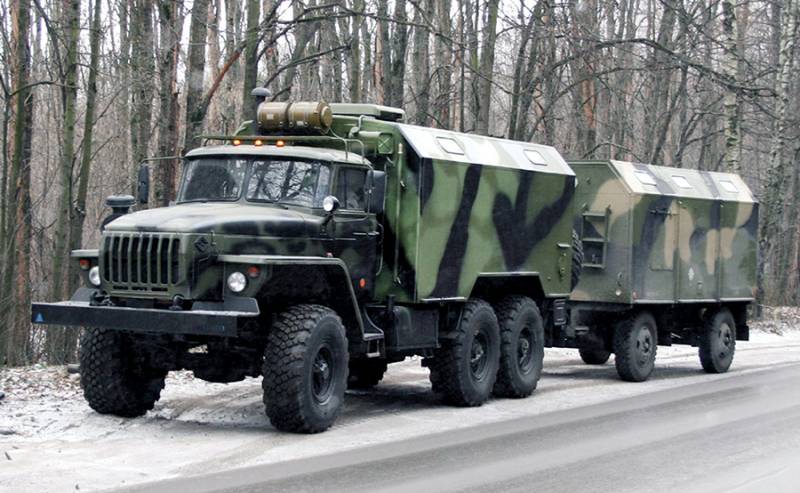 Self-printing marching BPK-63MKL, is designed to provide prompt publication in the field of multicolor printing products in A3 format. This is one of the modern modifications of the machines of the 4320 family and, obviously, one of the most exotic. Source: autowp.ru
Six years after the start of production, in 1983, Ural-4320 received the state Quality Mark. And until 1985, the plant could not bring the production of diesel trucks on a par with gasoline cars of the 375th series - the latter invariably produced in large quantities. The reason for this was the chronic shortage of power units from Naberezhnye Chelny. In this situation, the Urals could not dictate its own conditions - there was no own motor production, and the construction of the enterprise in Kustanai was delayed. When the KamAZ-740 engines began to be missed at all, the army even came up with the idea to re-equip all carburettor Urals with diesel engines. They even came up with a name for the new hybrid - Ural-375DD. But in 1993, a major fire occurred at the engine factory in Naberezhnye Chelny, the supply of motors to Miass was interrupted, and a new chapter opened in the history of Ural.

We are in Yandex Zen
Truck I-3. The first of Yaroslavl
Multi-axle rocket carriers
20 comments
Information
Dear reader, to leave comments on the publication, you must to register.