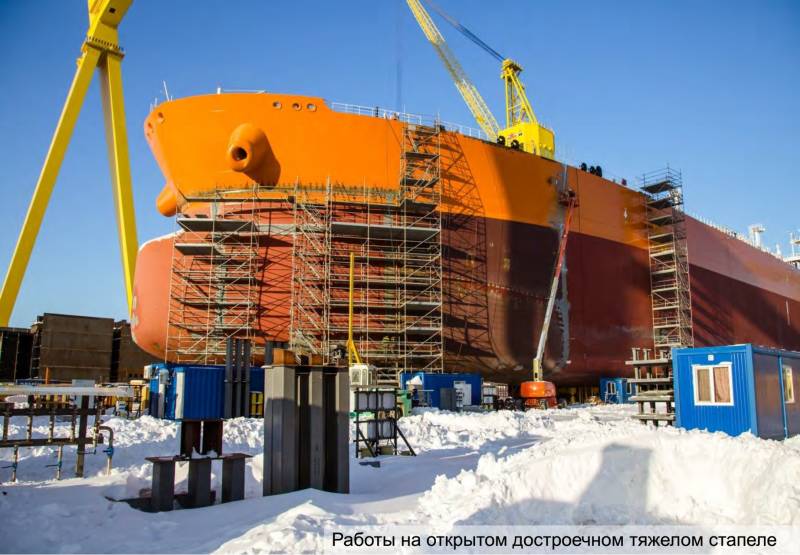 By order of the Government of the Russian Federation of October 28.10.2019, 2553 No. 2035-r, a strategy for the development of the shipbuilding industry for the period until 170 was approved. According to the approved strategy, in the shipbuilding industry, the main problem is the shortage of construction and launching facilities for the mass production of large-tonnage ships and vessels, which has a significant impact on the timing of their construction. Only a few domestic shipyards are capable of building civilian vessels longer than XNUMX meters.


On the basis of the enterprises of JSC Far East Center for Shipbuilding and Ship Repair, PJSC NK Rosneft together with JSC Gazprombank and JSC Rosneftegaz in the city of Bolshoi Kamen, a unique shipbuilding complex Zvezda is being created and a program for creating a shipbuilding cluster in the Russian Far East is being actively implemented .

The costs of building a shipyard designed to produce large-capacity vessels, ice-class vessels with a displacement of up to 350 thousand tons, special vessels and other types of marine equipment are estimated at 202 billion rubles.

An industrial group of enterprises is being formed next to the new shipyard for the production of ship components. Joint ventures were created with foreign companies in order to acquire competencies and subsequent localization of production in Russia. Currently, the first phase of the shipyard is commissioned and operating: an open heavy outfit slipway, a hull production block, a block assembly workshop, a saturation and modular assembly workshop, a pipe-processing and mechanical assembly workshop, paint booths, and a helical-steering column plant. A 110-meter Goliath gantry crane with a lifting capacity of 1200 tons, built in China, is installed on an open heavy outfitting slipway, which is capable of moving ready-made blocks to the ship's hull, and its two smaller brothers - gantry cranes with a lifting capacity of 320 tons. It should be noted that no domestic shipyard has gantry cranes with a lifting capacity of over 500 tons. 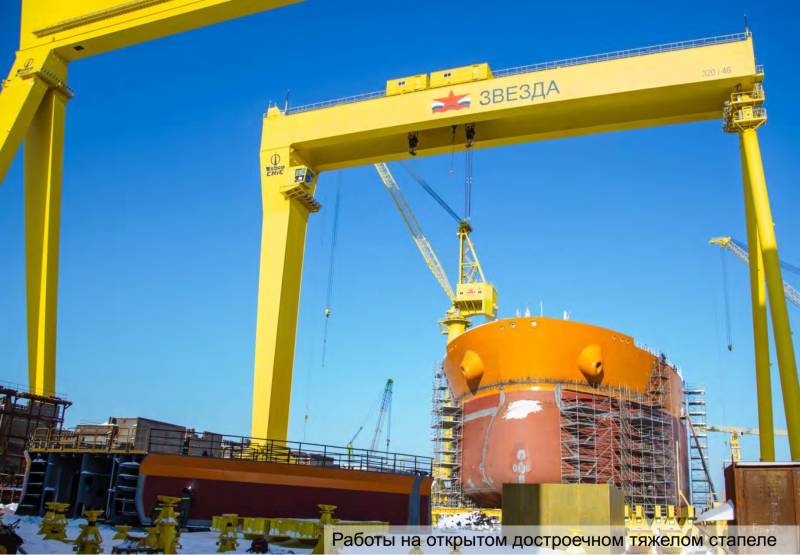 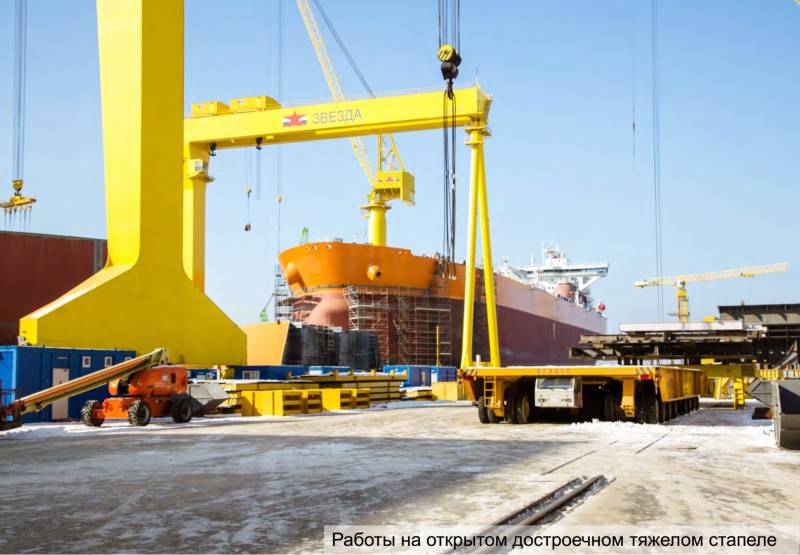 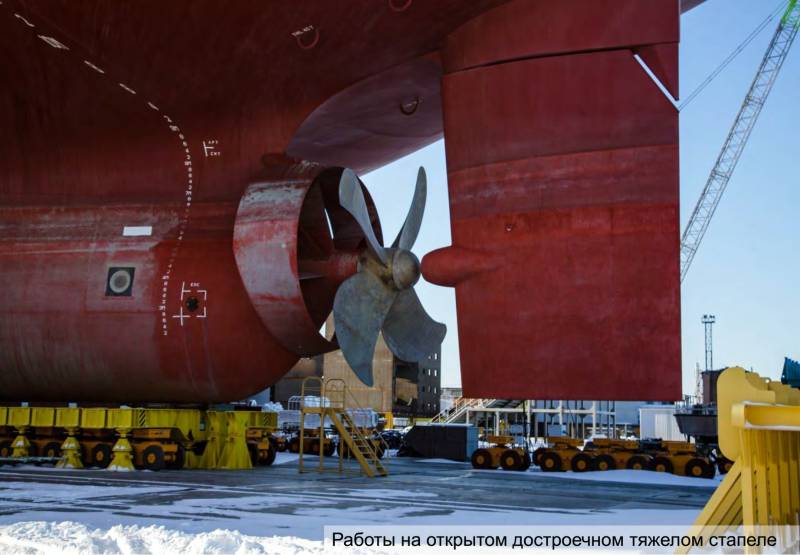 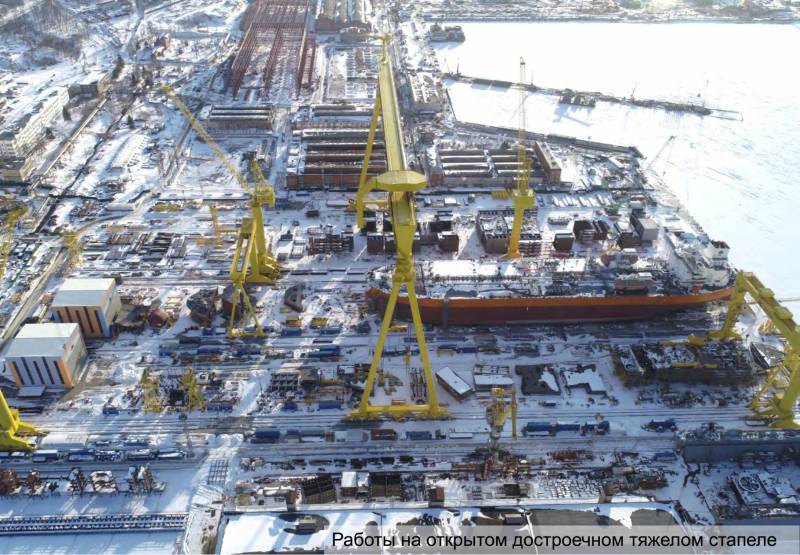 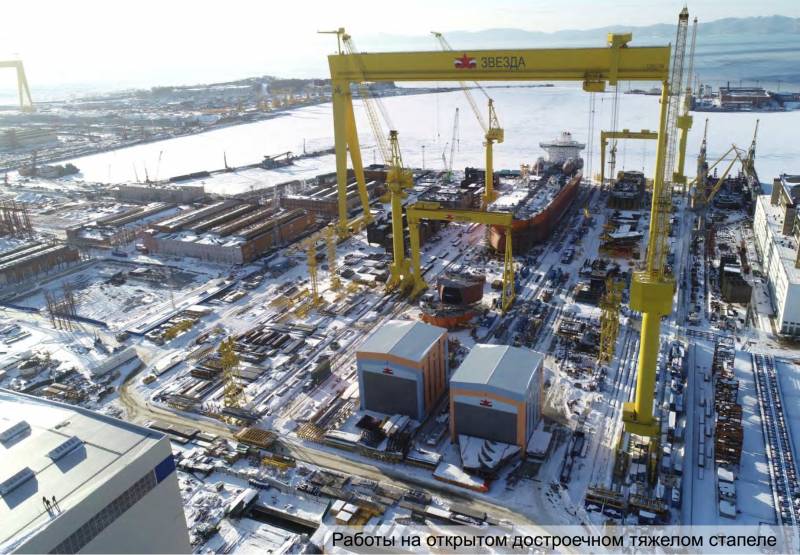 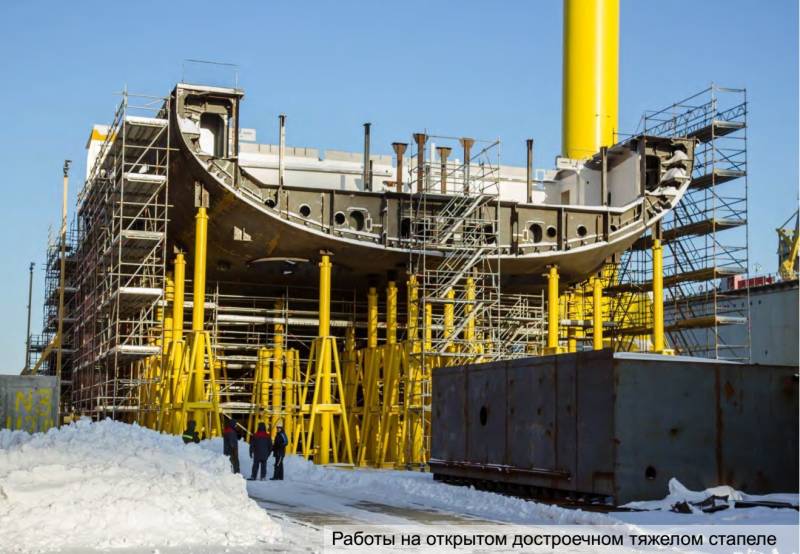 Among the facilities under construction in the second stage, a special place is occupied by the dry dock. Its dimensions: 485 × 114 × 15. There is no similar dry dock in the Russian Federation. The general contractor for the construction of the dry dock is the Chinese construction corporation China Communications Construction Company Limited. A second Goliath gantry crane, already two-girder, is installed on the pre-dock site, on which commissioning is being completed. 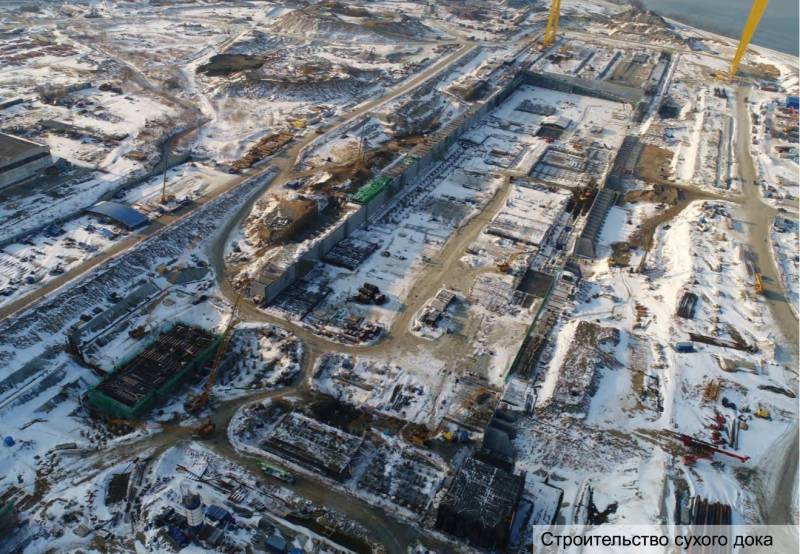 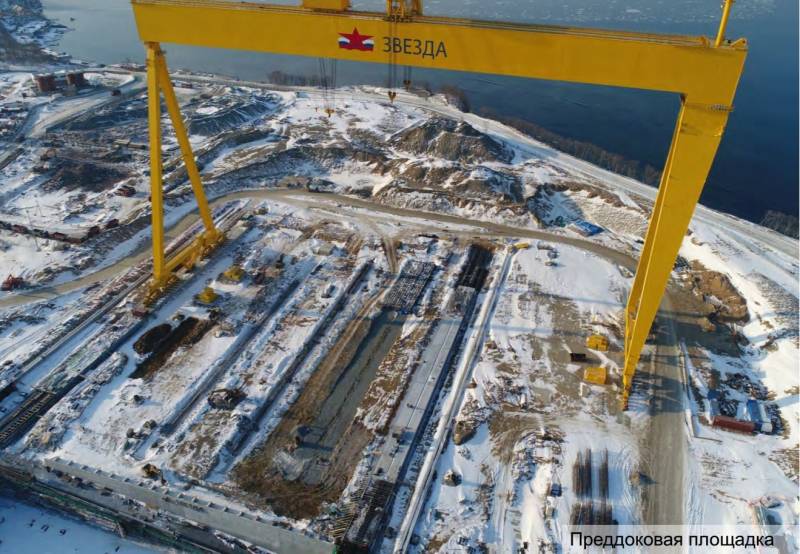 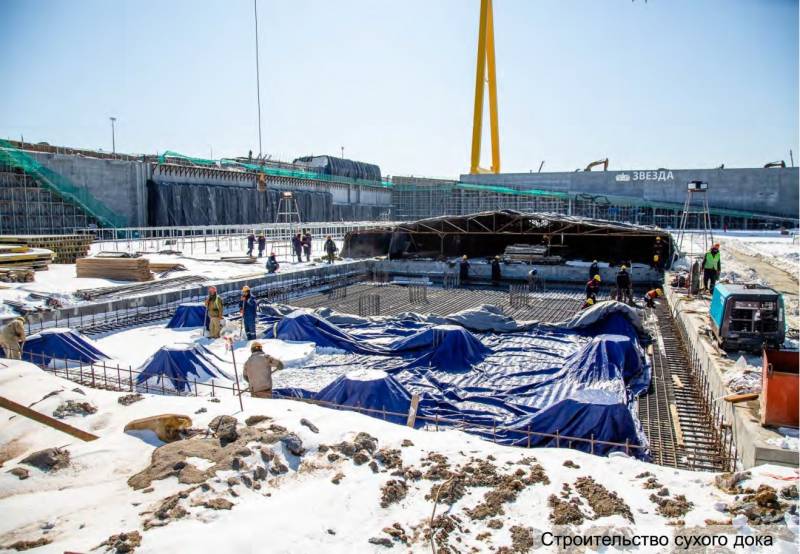 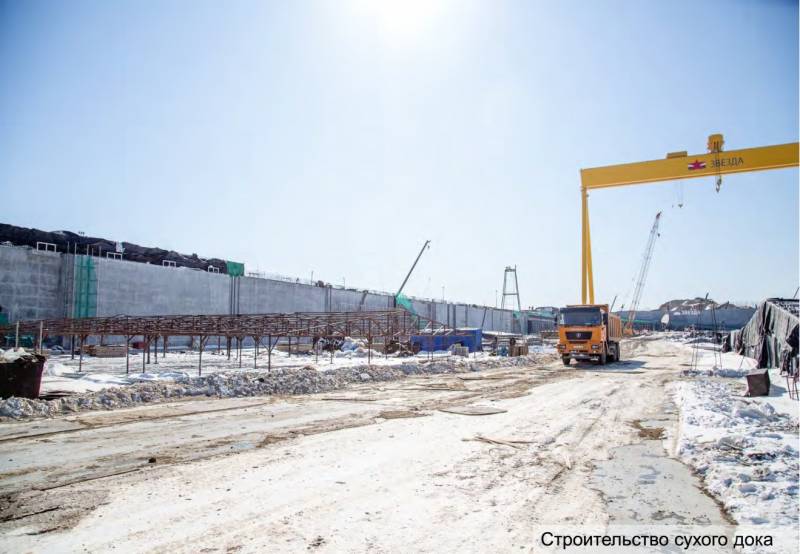 Currently, the shipyard is working on concreting walls and service galleries of the dry dock, dumping artificial land, construction of freight and outfitting embankments, as well as warehouses for outfitting and auxiliary workshops. A batoport is under construction - a special shutter installed to isolate the inside of the dry dock from sea water.

The production program of the Zvezda shipbuilding complex was developed until 2035 and has 178 units of ships and marine equipment of various types. 39 ships ordered to date. At the same time, the main load of the shipyard is provided by Rosneft PJSC, which placed an order for 28 vessels.

In February 2020, the Zvezda shipbuilding complex began cutting metal for the fifth large-capacity tanker of the Aframax type (Average Freight Rate Assessment) with a deadweight of 114 thousand tons. The tanker will be 250 meters long and 44 meters wide. The tanker will operate on fuel oil, diesel fuel and liquefied gas. The creation of such high-tech vessels at a domestic shipyard is necessary for the revival of the industrial and transport potential of Russia.

The tanker St. Petersburg (the first of the Aframax series) is scheduled to be launched in 2020. Since the construction at the shipyard has not been completed and the full production cycle has not been worked out, competencies have not been fully acquired, the St. Petersburg tanker was built almost completely (with the exception of the small bow block of the hull) in South Korea by Hyundai Heavy Industries and with the help of the China, a floating transport and transfer dock with a lifting capacity of 40000 tons has been lifted to an open shipyard slipway. The bow block was assembled at the Zvezda shipbuilding complex from separate sections, which were also made in South Korea and subsequently delivered to Big Stone. After docking the bow block with the rest of the vessel, the tanker will be launched.

As new workshops are opened, localization will increase and competence will be developed, new personnel will be trained and trained at the shipyards of South Korea, the proportion of independently performed work will be increased, production chains will be debugged.

We are in Yandex Zen
Shipbuilding: inefficient and unprofitable
List of destroyed the largest and most high-tech enterprises
156 comments
Information
Dear reader, to leave comments on the publication, you must to register.