Dead on Tierra del Fuego. In memory of the Hero of the Soviet Union Galina Petrova 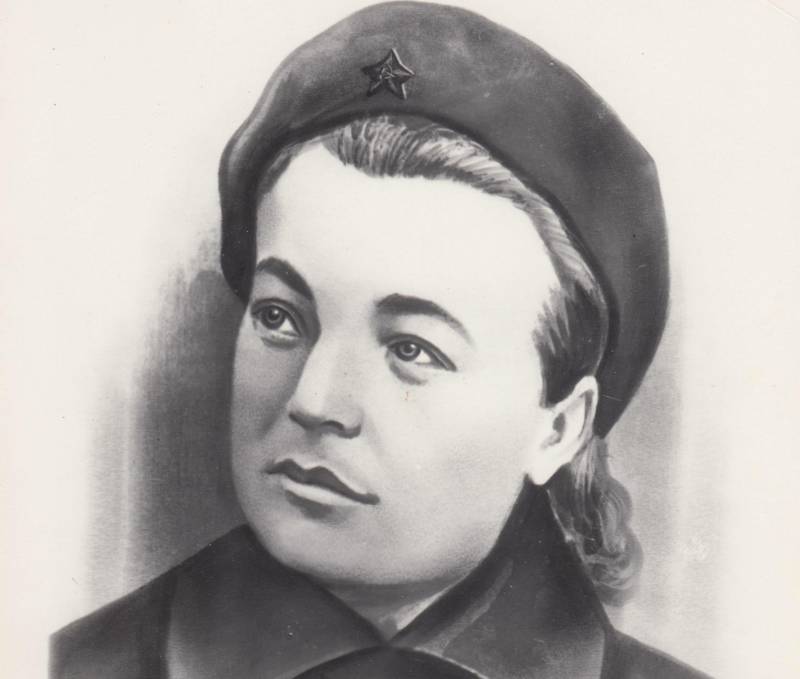 On International Women's Day, I would like to congratulate those women to whom we owe our lives, but on earth they cannot be given flowers. You can only bring the bouquets to the monument. One of these women is the Hero of the Soviet Union Galina Konstantinovna Petrova. In September of this year, she would have turned 100 years old, but fate measured her only 23 years old.


Her short but vibrant life is closely connected with the sea. Galya was born on September 9, 1920 in the family of a sailor. A significant part of her childhood was spent in Novorossiysk, where in 1937 she graduated with honors from school No. 1. Then the girl married Anatoly Zheleznov, who was soon called up for the Soviet-Finnish war, and after that he took part in the defense of Leningrad ...

Of course, then the young family did not yet know about the upcoming trials. There was a hopeful youth, birth of a son, dreams of the future ... In 1940, Galina went to study in Novocherkassk, where she entered the Engineering and Land Reclamation Institute at the Forestry Department. Little son Kostya remained with his grandmother, Antonina Nikitichnaya, in Novorossiysk.

The future heroine managed to graduate at the institute only one year - the Great Patriotic War broke out. In July 1941, Galina went to Novorossiysk to her mother and son. Like millions of Soviet girls, she wanted to get to the front, she draped on the thresholds of the military enlistment office. They did not want to send the young mother to the war, citing the fact that she did not have skills useful for the front. Then G. Petrova went to study at the feldsher school in Krasnodar.

After completing the courses, Galina was sent to the hospital of Novorossiysk (according to other sources, to the 43rd naval hospital in Gelendzhik). The hard, tense, almost round-the-clock work of the young woman was not enough - she wholeheartedly strove for the front line. Especially after in 1942 she received the tragic news of the death of her husband Anatoly. Yes, and the enemy was eager for Novorossiysk.

Then she was transferred to the Marine Corps battalion. Galina showed herself to be a selfless nurse and a reliable companion. When the fall of 1943 began to prepare for the landing on the Kerch Peninsula, she was honored to be elected to the number of participants in the upcoming operation, important and dangerous.

The training took place on the Taman Peninsula near the Fanagoria fortress. They made a mock-up on which the soldiers worked out the assault on enemy positions in the village of Eltigen.

The participant of the Kerch-Eltigen landing operation V.F. Gladkov wrote in his book of memoirs:

“The chief medical officer of the medical examiner Galina Petrova had golden hair, knocking out from under her battered earflaps, and wonderful blue eyes. She was of medium height, in the full bloom of her sweet youth - a little over twenty years old. Even a hungry rations could not extinguish the young blush. She stayed in a sailor environment, as between brothers, with the simplicity and dignity of her beloved sister. ”
Gladkov told how the commander of the front, Army General I.E. Petrov met with his namesake during the exercises and asked if they were relatives. The following dialogue took place between them:

- I like history and navy.
“What did the fleet seduce you with?”
- People at sea are brave, fearless. My dream is to get to the marines ... True, comrade commander, this is my biggest dream now.
- Fighting girl, as I look.
- No, I want to be fighting, if you knew how I want this!

Eltigen at that time was a small fishing village near Kerch. Later it was renamed to Heroevskoye, the people called the village Heroyevka, but the previous name was still heard.

The places where Galina Petrova had a chance to fight were created by nature for human joys, healing, and enjoyment of beauty, but in those years shells burst there, blood poured and enormous human grief reigned.

As the poetess Julia Drunina, a participant in the Great Patriotic War, writes later:

Pulling their Texans to their knees
On the edge of the beach, girls laugh.
But I see a spa tonight
Here "Tierra del Fuego" is Eltigen.
This poem is dedicated to a frontline nurse. And although there is no exact information, it is possible that it is for her - Galina Petrova.

... Of the compasses of dead boats
The girl drains alcohol from the sanbat,
Though he’s now useless for the wounded,
Although at this hour they do not need anything.
In captivity of bandages, in earthly darkness
They look with a wary look ...
On the night of November 1, 1943, people were definitely not up to admiring the beauties of this wonderful land. The sea was desperately storming, enemy fire was fired from the Kerch coast. Marines marched on ships to the landing site. The positions of the Nazis were very well strengthened.

The first to land on Tierra del Fuego was a battalion of Major Belyakov, which included Galina. An obstacle arose in the way of the landing: barbed wire, and behind it - a minefield. Someone shouted: “Minesmen here!”, But the delay threatened to disrupt the operation. And then the medical officer Petrova decided. Overcoming the wire fence, she shouted: “Follow me! There are no mines! ”

Whether it was a false minefield or the soldiers were lucky, but the obstacle was overcome. Truly, what was left for the men to do when the woman called them forward?

In all subsequent battles, Galina showed unprecedented courage, saving the wounded, helping them under heavy fire of the enemy. She was called Comrade Life, considered the pride of the battalion. In the first battle in Eltigen, she saved more than twenty soldiers.

Petrova was introduced to the title of Hero of the Soviet Union. November 17, 1943 she was awarded it. Did she find out about the well-deserved reward? It is unknown ... Data on the date of the death of the heroine vary - some sources say that she died on November 8, in others - December 8.

The most common version is this: Galina received shrapnel wounds on November 2, when she ran from one wounded soldier to another. Both legs were seriously damaged. The wounded was sent to the hospital, under which they adapted the school of the village.

To encourage a comrade, comrades said that she was presented for the award and she would soon go to Moscow. But Galina dreamed of seeing her son and mother. By the way, until the last day she had with her a small particle of her home - a toy of her child carried through all the fights.

On November 8, a fascist shell hit the school building. Patients in an impromptu hospital, including Galina Petrova, died. Wikipedia, however, has a different death date - December 8th.

One way or another, but the brave nurse who gave her life for the liberation of the Motherland was buried there, near Kerch, in a village called “Tierra del Fuego”.

Streets in Nikolaev, Sevastopol, Tuapse, Novocherkassk, Novorossiysk and, of course, in Kerch are named after her. She erected monuments in southern cities. Books about her were written - “The Girl from Tierra del Fuego” (Y. Evdokimov, 1958) and “Galina Petrova - Pride of the Black Sea fleet"(A.N. Zadyrko and GG Zadyrko, published in Nikolaev in 2010). Unfortunately, these books are not publicly available.

In addition, the heroic nurse was forever listed on the 386th Separate Marine Battalion of the Red Banner Black Sea Fleet. She became the first woman in the fleet to be awarded the Golden Star of the Hero.

... Galina Petrova Street in the center of Tuapse is one of the busiest. Now showcases of expensive shops shine on it, brisk trade is underway, grandmothers sell bouquets of mimosas and tulips for the holiday. And on one of the houses there is a barely noticeable plaque with a portrait of the one in whose honor the street is named. On a gray stone it is written that Galina Petrova was a participant in the defense of this southern city (no details could be found about this). 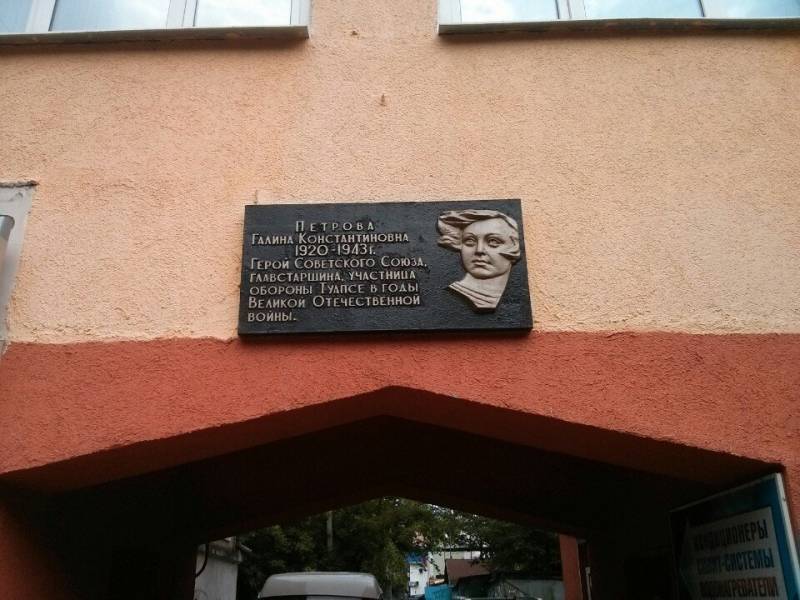 We are in Yandex Zen
Women who defeated fascism
Icy embrace of the North. Soviet submariners is dedicated
19 comments
Information
Dear reader, to leave comments on the publication, you must to register.