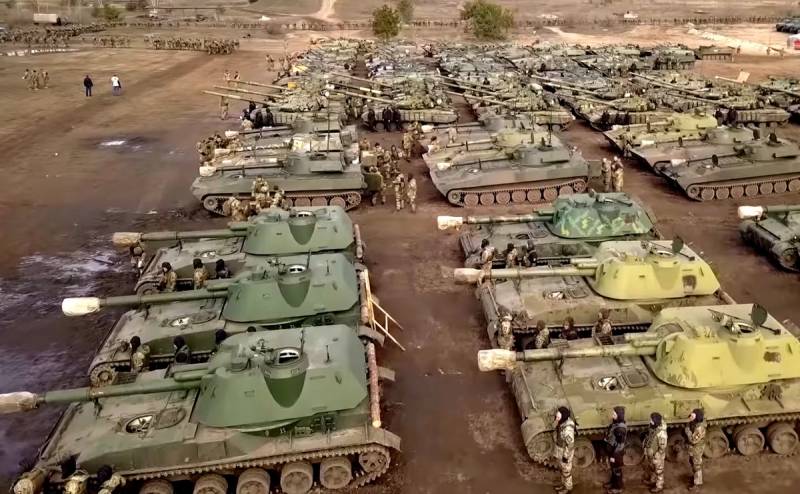 A video of the control practical training of the 54th mechanized brigade of the Armed Forces of Ukraine appeared on the Web. The creators of the video tried to show the "combat power" of the modern Ukrainian army, striving for NATO standards.


The video says that the Ground Forces of the Armed Forces of Ukraine abandoned the Soviet system of testing readiness for hostilities, in which the main element was combat drill, and not control practical exercises, during which soldiers, weapons, equipment and interaction of the units were checked.

In Soviet times, it was the combat drill that was the tip of the “army window dressing,” because during it, first of all, the appearance of the fighters and the dexterity of marching with a solemn march to combat songs were assessed
- said the creators of the video from Defense Express, posting the video on their own channel on YouTube.


However, netizens who watched the video noticed that Ukraine still had nothing to be proud of in terms of armaments, despite loud statements about the transition to NATO standards and the rejection of the "Soviet legacy".

Here are some of the comments for this video:

They departed from the Soviet, but the old Soviet equipment is operated
The average age of technology is 50 years or more?
Soviet scrap metal showed
Are these NATO standards?
As one commenter noted, the Armed Forces of Ukraine once again removed the "window dressing", designed for an inexperienced civilian audience, signing it all as a "departure from Soviet standards." According to him, in the Soviet army combat capabilities have never been evaluated by combat drill. The combat readiness of the units of the Soviet army has always been evaluated in practice, for the conduct of which the command spared neither ammunition nor equipment.
Ctrl Enter

We are in Yandex Zen
Summary of the week from voenkor Mag about events in the DNI and LC 21.04.18 - 27.04.18
Reports from the militia of New Russia for 27-28 September 2014 of the year
121 comment
Information
Dear reader, to leave comments on the publication, you must to register.