Victory has a female face 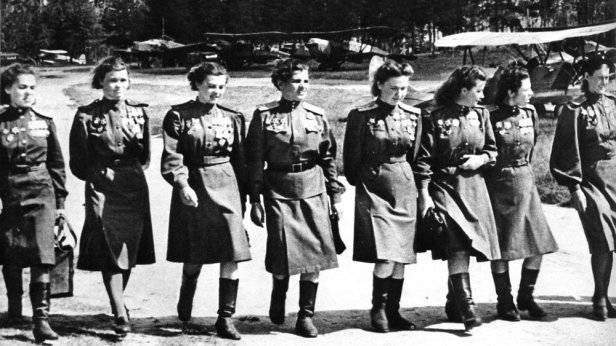 In the huge, boundless topic of the Great Patriotic War there are aspects that must be approached with the utmost delicacy and deliberation, so as not to turn them into occasions for further speculation and attempts to denigrate the sacred. One of such moments is the question of the participation in the events of those years of Soviet girls and women, their unparalleled heroism, the greatest military feat. It is necessary to talk about this so that the memory of our compatriots who have made an invaluable contribution to the Victory never fades.


Women officially awarded the high title of Hero of the Soviet Union officially number 95. Add to this four more who have become full holders of the Order of Glory. However, can only those representatives of the female half of the Soviet people who have been awarded high honors and titles be considered heroines? Any real man will agree that even one day of stay of those who are created for love, peace and the birth of children in the war zone, saturated with death and suffering, or even in the immediate vicinity of it, is already a feat.

The exact number of women who fought to this day remains the subject of controversy and, alas, speculation. Incidentally, the statement so beloved by Russian liberals that “the Germans did not throw their Frau under bullets” does not correspond to the truth in the least. The most plausible data seems to be about half a million women and girls who participated in the Great Patriotic War as part of the regular units and formations of the Red Army. At the same time, a huge number of those who fought with the enemy in the occupied territory in the ranks of the underground and partisan detachments are not even subject to approximate accounting.

Before the war, the fair sex, except for a few physicians and employees of household services, was not in the Red Army as such. And even after an enemy invasion fell on our Motherland, they were guarded from the front as much as possible. In 1941, military commissariats and district committees of the All-Union Communist Party of Bolsheviks and the Komsomol literally besieged tens of thousands of communists and Komsomol members, who demanded that they be sent immediately to fight the enemy. The military commanders who stood before this frantic pressure had to poke almost at the windows in some cases. Several thousand especially persistent, besides who had civilian specialties urgently needed in the troops (pilots, signalmen, doctors), nevertheless achieved their goal and went to war already in the first year of the Great Patriotic War.

The full-scale appeal of women in the Red Army began only in 1942. Fierce battles bleed the army so much that every soldier, and even more so an officer, was counted. Initially, the idea was to fill those regular positions with a weak sex that did not involve significant physical exertion, high risk, and increased training requirements. In the end, it turned out that women beat the Nazis almost on a par with men. Well, perhaps there were fewer of them in artillery or, say, armored forces. Though история remembers Maria Oktyabrskaya, driver tank "Fighting girlfriend." The list of Heroes of the Soviet Union is most likely to be pilots. What did the “Night Witches” alone cost, led by the creator of this legendary regiment, Marina Raskova, of the “Aryan supermen” to persistent insomnia and shameful drape. There were, however, female fighters, who were in no way inferior to the Asam men.

Snipers, gunners, air defense fighters, machine gunners and signalmen ... Nurses and medical officers who dragged fighters who weighed three times against them, and even with weapons. And sometimes they put aside the sanitary bag and grabbed the machine gun to save the wounded, whom the "European civilizers" with swastikas killed without the slightest hesitation. To prevent this, the medical instructor Valeria Gnarovskaya threw herself with grenades under the Nazi tank, trying to crush the tent with a red cross. Underground workers and partisans, liaisons, saboteurs, scouts ... How many of them remained completely unknown ?! Alas, far from all the names of those who, having gone through inhuman torture and bullying, in the instant of execution threw the executioners in the face: “Victory will be ours!”

We remember the names of Zoe Kosmodemyanskaya, Zina Portnova, Manshuk Mametova, Nina Onilova, Lyudmila Pavlichenko. We also remember hundreds of thousands of others whose names have not turned into symbols, but whose deeds have given us all the opportunity to live today. Their feat cannot be measured either by days spent on the front lines or by the number of enemies destroyed. It is impossible to measure it at all - for it is huge and eternal.

We are in Yandex Zen
Situational analysis of the death of the MH17 flight (Malaysian Boeing 777), made on the basis of engineering analysis from 15.08.2014
Results of the week. "God forbid to see Russian revolt, senseless and merciless!"
254 comments
Information
Dear reader, to leave comments on the publication, you must to register.