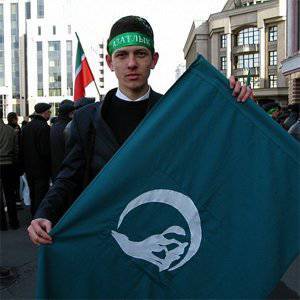 24 June, the first meeting of the leaders and activists of the Bashkir human rights movement Kuk Bure and the Union of Tatar Youth Azatlyk was held in the capital of Bashkortostan.

Following the meeting, a statement was prepared in which the participants expressed their determination to establish effective cooperation between the two organizations for an effective struggle for the legitimate rights and interests of the Tatars and Bashkirs. There were also criticisms of the Russian authorities, accusations of ethnocide of non-Russian peoples, the Kremlin’s reluctance to promote the opening of national kindergartens, schools, universities and libraries.

Both organizations also stated that they intend to create a common Turkic organization to conduct an organized struggle for the rights and legitimate interests of the Turkic and other non-Russian peoples: "We are open for dialogue and invite all concerned to join us." Kүk böré "and" Azatlyk "recognize international law of nations on self determination and will strive to promote its implementation. "

After the murder of Valiulla Yakupov and the attempt on the life of the mufti of Tatarstan Ildus Fayzov, we finally came to the realization that the situation in the Volga region was far from stability.

Organizational weakness and corruption of law enforcement agencies does not allow for effective work to counter terrorist threats in the region. But explosions and shooting are “hot dishes”. Opponents of Russian-Turkic unity prepared to destabilize the situation and “cold dishes”. This is exactly how the statement “Cook storm” and “Azatlyk” should be interpreted.

There is a clear intention behind the democratic verbal tinsel to create a separatist platform in the Volga region, attracting Tatar and Bashkir to its construction.

Tatarstan has always been "senior" in the Tatar-Bashkir dialogue. Compared with Bashkiria, separatist sentiments were always more pronounced in Tatarstan. Only Kazan can withdraw Bashkiria to the separatist "voyage", provided that the authorities in Kazan take the course to build their own state, mixed with Russophobic rhetoric.

The official Kazan does not do this, but all sorts of spiteful critics, disguised as defenders of the rights of peoples, etc., strive for it.

Take a look at Azatlyk. This organization is the best ally in protecting the rights of the Tatars ... NATO!

“We see NATO as a potential ally in the struggle for our democratic and national rights. In conditions when the Russian government does not consider our interests, when national schools are closed, when there is no national university and a federal TV channel in the Tatar language - and we are the second largest nation in Russia - in conditions when persecution of national activists occurs, we We see no other way out than to turn to democratic countries, NATO members, to put pressure on Russia, which is not fulfilling international obligations to protect the rights and interests of national minorities, "just so yrazilsya chairman "Azatlyk" Nail Nabiullin in an interview with "Novaya Gazeta". He added that the organization supports the opening of the NATO base in Ulyanovsk.

What is it like blatant collaborationism? Today, Nabiullin and his comrades will run to kiss the NATO boot, grinning in a devoted smile, and tomorrow, decide the NATO members that in order to bring democracy to Russia in it, you need to drop a couple of bombs, run with a gun in the forests of the Anglo-Saxons. And those in return, you see, will grant him the post of the head of some, and even higher!

The stamps used by Cook Tempest and Azatlyk are utterly beaten, and resemble the “democratic” howls of the Ukrainian, Estonian, Georgian nationalists of the 1990 era.

Having achieved their purpose, these guardians for the rights of nations immediately rushed to express loyal feelings to Western masters (and where did their angry tirades go that the people's honor for them was paramount?), And to stifle anyone who does not agree with their policies.

Georgia suffered so far that it invited Israeli and American instructors, who taught Georgian warriors to bombard sleeping peaceful cities and Russian peacekeepers.

By the way, the former commander of the mixed peacekeeping forces in the zone of the Georgian-Ossetian conflict during the August 2008 war, General Marat Kulakhmetov, is a Tatar. But the “Azatlykovtsy” do not call to be equal to people like him, but they slip the young people of their rotten “heroes”.

Behind the initiative “Azatlyk” and “Kuk Bure” - a project to create a powerful and united Turkic opposition, which embraced Tatarstan and Bashkiria, republics that have enormous strategic importance for Russia. If separatism of the suburbs, as in Chechnya and Dagestan, is part of a danger, then separatism almost in the center is all danger.

Understand this in the United States, so Hillary Clinton and Tatar nationalists so quickly found a common language during her visit to Kazan. And work for Americans promises dollar grants and business trips abroad to increase espionage skills. Here are some trying to ruin their country from the inside. Work is well paid!

And, fortunately, not all Tatars and Bashkirs are led by pro-Western Jews. “We are against the deployment in Russia of any military bases of foreign states. True, now I speak only as a citizen, and not on behalf of the organization. But for us this question is so clear that we will not even discuss it, ”said Ruslan Aisin, chairman of the World Forum for Tatar Youth.

Largely due to the bureaucratic slowness of Moscow, its political blindness and the internal Russian social problems, the West managed to create a hotbed of permanent tension in the Caucasus.

Now we are witnessing the second stage: attempts to create the same focus in the Volga region. And, if it does not work out quietly and without shots, do not doubt that the West will go to a bloody scenario. And from the rear they will be helped by nabiullins and their ilk. And it is good that in the Tatar and Bashkir national environment this is understood.