The results of the meeting between Putin and Erdogan. Idlib knot weakened yet 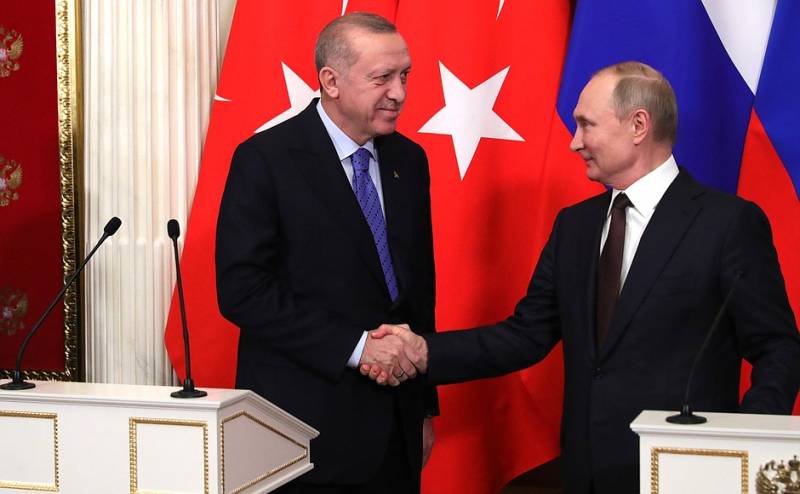 On March 5, a meeting between the presidents of Russia and Turkey took place in Moscow, the goals of which were de-escalation, and ideally, a complete resolution of the conflict situation in Syria that had escalated to the limit. Judging by the statements made at the end of the summit, it was not fruitless and the parties nevertheless managed to come to certain agreements. However, the question of what Idlib expects (a lasting peace or a shaky truce) as a result remains open.


According to official information, following a six-hour (three in private “tête-à-tête” mode and exactly the same with participation of members of government delegations) meeting between Vladimir Putin and Recep Erdogan, a joint communiqué was signed, identifying the main clauses of arrangements. These are: a complete ceasefire on the currently registered contact line of the warring parties from March 6 this year; the creation of a six-kilometer safety corridor covering the M-4 strategic highway both from the south and from the north; starting on March 15, joint patrolling of this freeway with the participation of Russian and Turkish military personnel.

The statements made at the end of the talks by the leaders of Russia and Turkey, let’s say, are somewhat different. Recep Erdogan, in his usual rather emotional manner, continued to talk about the need to give the new status quo “the Idlib de-escalation zone” and the stories about “Ankara’s great determination to implement the Sochi accords”. And in the end, I couldn’t resist frowning, warning that “reserves the right to answer in case of new Syrian attacks”. By the way, he placed them (but not on Russia) “responsibility for exacerbating the situation”.

All this would have sounded quite serious and weighty if it were not for the subsequent words of Vladimir Putin, who said with emphasized calmness that Moscow’s “assessments of what is happening in Syria” do not always coincide with the “Turkish partners”, but in this case, an acceptable solution is all -so achieved.

The reality is that during the six-hour “battle”, clearly not Turkey got the upper hand. This is perfectly clear if only from the fact that before Erdogan’s trip to Moscow in Ankara, the voices of politicians were heard in full force, urging him to “put pressure on” Putin, demanding from him “apologies” and even some “compensation” for the death of the Turkish military near Idlib. The Turkish president received condolences on this occasion, but no more. It is very significant that the arrogant and warlike rhetoric of Erdogan, who had recently demanded that Russia "get out of his way in Syria" and promised a "terrible revenge" for air strikes in Idlib, in Moscow was somehow instantly replaced by assurances that the relations between the two countries now “Are at their peak” and the Turkish president sees his main task exclusively as their further development.

Perhaps the reason here lies in the fact that both states have come to the start of negotiations with slightly different positions. Russia, according to military analysts, on the eve of significantly increased its presence in Syria - both the transfer of warships, and with the help of the "air bridge". In addition, the SAR forces just before the meeting kicked the pro-Turkish militants out of a couple of other settlements, and the Russian military police were introduced into the fierce confrontation of Sarakib. Ankara at that very time was engaged in the fact that it enthusiastically “nightmares” the European Union, opening the borders for new numerous groups of refugees seeking to go there. And what did you get? Reproaches from Brussels, Paris and Berlin and vague promises of "support" from Washington, which had previously made it clear that there would be no military assistance. Some unequal successes in the preparation, do not you find?

Hence the results. There is clearly no question of any withdrawal of the Russian troops or the "retreat of Damascus forces to the position of 2018". As well as the requirements to establish a no-fly zone over Idlib for all but Turkish UAVs. Anyway, apparently, Ankara’s attempts to bargain for itself any other concessions using the eastern bazaar methods, other than those previously agreed in the same Sochi, were stopped quite decisively during the conversation. I had to agree on the conditions of Moscow.

Be that as it may, the first steps to resolving a conflict that has almost gone out of control have been taken. Now it remains to hope that the fate of those declarations that were adopted on the same occasion in Sochi and even earlier in Astana will not expect Moscow agreements between Russia and Turkey on Idlib. It is good that the good intentions voiced in the Kremlin are paved for the road to peace in Syria, and not to the next circle lasting in this country for which year of military hell.

Author:
Alexander Kharaluzhny
Photos used:
website of the President of the Russian Federation

We are in Yandex Zen
The attack on the Russian aircraft and the political situation in Turkey
Results of the week "I do not need a Turkish coast"
42 comments
Information
Dear reader, to leave comments on the publication, you must to register.