Learning is light. But not for Ukraine 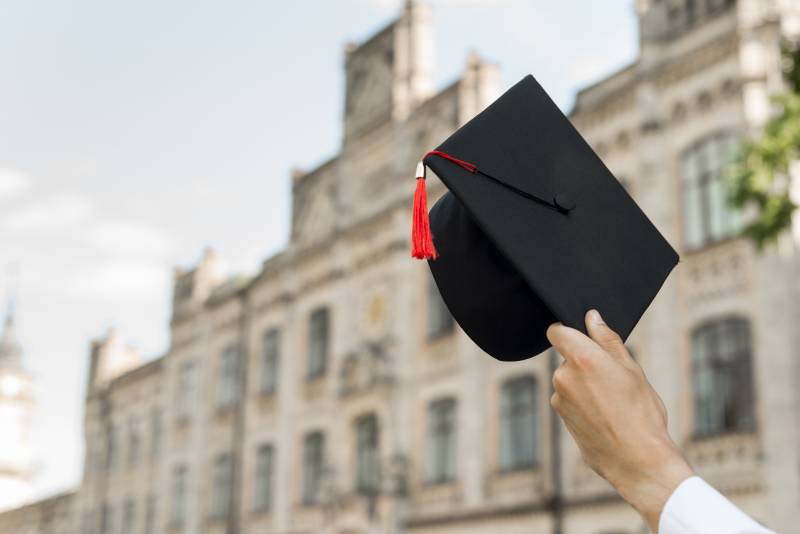 This year in Ukraine, the cost of tuition for students will increase sharply and everywhere. Moreover, it is planned to close as many universities as possible, to “reform”, “optimize” them, and the like, which in the Ukrainian version for those who become their object never ends with anything good. It seems that on the higher education system they finally decided to put an end to it.


The country of the victorious Euromaidan continues to move more and more intensively along the path of turning into an agrarian and raw materials appendage of developed countries, in addition supplying cheap and low-skilled labor there. The devastating reform of higher education actually started with the adoption by the Verkhovna Rada at the end of last year of a special law "On improving the educational activities of universities." Soon after, the Minister of Education of Ukraine (now former) Anna Novosad announced that the number of universities in the country alone should be reduced by three times, since now the state will finance them “based on performance indicators”. Who and by what criterion should determine those, was not specified.

So far, the main highlight of the planned innovations is clearly a significant increase in the cost of training for those who pass it on a paid (contract) basis. The Ministry of Education accuses university representatives of dumping, and the Ukrainians themselves of reluctance to spend money on a quality education. At the same time, according to officials, the quality of training is limping and “specialists” leave the walls of alma mater with diplomas, but without knowledge and necessary skills. On the one hand, there is some truth to this. On the other hand, given the real standard of living of the vast majority of Ukrainians, who in recent years have come to almost complete impoverishment, higher education costs will simply cut off hundreds of thousands of young people whose families will be physically unable to pay for it.

All this is all the more true that being a student in Ukraine right now is not a cheap pleasure. The number of seats for those who cook at public expense shrinks every year, like shagreen leather. In addition, in order to be awarded such an honor, an applicant needs not only to show excellent knowledge, but to break through the dense ranks of beneficiaries, today consisting primarily of the heroes of Euromaidan and participants of the ATO, as well as their offspring. All roads are open to those in the country ... The rest can only pay.

In the leading universities, “underestimated” for the year of study, before, it was necessary to spread from 30 to 70 thousand hryvnias (about 120-280 thousand rubles) per year. At the same time, in some institutes and even universities, a diploma could be obtained for a fee half or three times lower (12-20 thousand hryvnias per year). According to the new rules, not a single university will be able to take a student less than the amount of 30 thousand for an annual course of study. Moreover, every year this figure will steadily increase by another 10%. Depending on the specific educational institution and specialty, the price increase will be from 10-20% to 100%. On average, tuition prices will skyrocket by at least a third.

It’s easy to guess where this will lead. The same Novosad admitted last year: over the past decade, the number of students in Ukraine has already halved! In addition to the material side, there is one more point - often obtaining a diploma does not open any real prospects for a university graduate. Who, for example, needs “techies” in a country with completely destroyed industry? The conversations of Zelensky and the company about the upcoming "innovative breakthroughs" of Ukraine so far remain an empty air shake, in reality, the knowledge-intensive and technological sectors of the economy have almost completely degraded. Future "earners" higher education is not required, especially given the fact that they are increasingly mistrusted of Ukrainian diplomas in the world. And abroad, as a rule, those who are ready for the minimum fee to do the most difficult work, and not smart people with diplomas, are needed.

However, in the same Poland immigrants from Ukraine already account for more than half of foreign students. The tuition prices there were quite comparable with the Ukrainian ones before the “epochal” reform, and now they will even be lower. The prospect of employment after graduation from higher schools is much higher. Well, most likely, the data voiced by the Ukrainian Ministry of Finance in the middle of last year that at least one fifth of the country's able-bodied population (more than 3 million people) work today outside its borders will seriously change in the near future. Naturally, in the direction of increase.

Author:
Alexander Kharaluzhny
Photos used:
website of the Ministry of Education of Ukraine

We are in Yandex Zen
What you didn't want to know about England
List of destroyed the largest and most high-tech enterprises
75 comments
Information
Dear reader, to leave comments on the publication, you must to register.