The unique MiG-23-98 is able to replace the Turkish Air Force. The tool that was forgotten in the Ministry of Defense of the Russian Federation 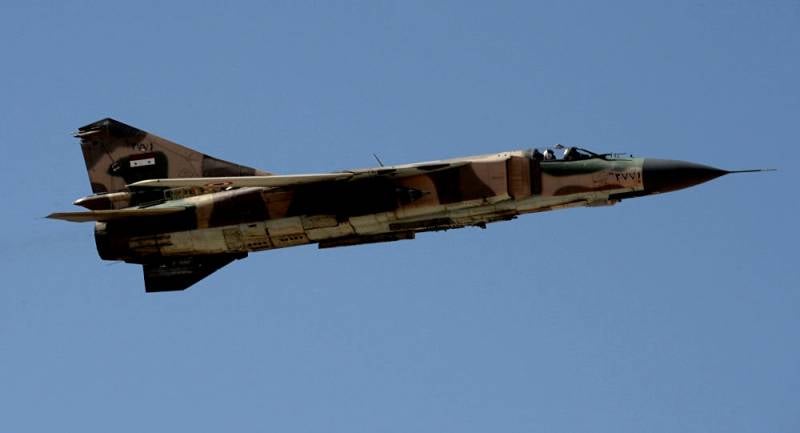 Having bet on the complete removal of the tactical air wing mixed aviation Russian Aerospace Forces special forces from tasks to form a no-fly zone in Syrian airspace above the Idlib theater of war, as well as to the technically justified impossibility of using Syrian air defense systems S-300PMU-2 “Favorit” against Turkish air attack means skillfully hiding behind the Nur mountain range in the Khatai silt (due to the use of 48N6E2 anti-aircraft missiles, which need to be illuminated with semi-active radar seekers), the Turkish F-16C / D Block 50/50 + multi-role fighter squadron in the first days of the Spring Shield operation was able to achieve total air superiority over the obsolete strike aircraft of the Syrian Air Force.


There is nothing extraordinary in this scenario, because they are characterized by low maneuverability, an impressive effective scattering surface (of the order of 15-17 square meters), the presence of an outdated Orion-A radar with a parabolic antenna array and an extremely low level of noise immunity, as well as the lack of appropriate software and hardware reserve for the integration of modern medium-range air combat missiles and electronic warfare systems, front-line bombers of the Su-24 Syrian Air Force were intercepted by more or less modern cancers s "air-to-air" with active radar seeker AIM-120C-5/7 at ranges from 70 to 100 km (without penetration into Syrian airspace). Against this background, the Syrian air defense forces were able to oppose the Turks with only the Pantsir-C1 anti-aircraft missile and artillery systems and the Buk-M2E air defense systems, which provided cover exclusively for the eastern and southern areas of Big Idlib.

Unique MiG-23-98: modernization reserve, which was not embodied in hardware

Meanwhile, one and a half to two dozen front-line fighters of the MiG-23MF / ML family are in service with the Syrian Air Force combat units, which can be upgraded to the multi-functional versions of the MiG-23-98-1 / 2/3, announced by OKB . Mikoyan, OJSC "Fazotron-NIIR", as well as GosNIIAS back in 1999. Despite the fact that the program to upgrade the “Floggers” to the MiG-23-98 level was frozen back in the early 2000s, its renewal as part of the “package” of military-technical support to the Syrian Arab army is a matter of short time.

As for the optional filling of this modernization program, it provided for the re-equipment of the standard MiG-23ML / MF with perspective on-board Moskit-23 radars based on waveguide-slot antenna arrays (instead of the early Sapphire-23ML / RP-23ML, presented by the Cassegrain antenna ) with increased energy potential of the transmission path, as well as hardware and software adaptation of the weapons control systems (SUV) of the MiG-23ML family of fighters to the use of modern medium-range guided air combat missiles RVV-AE ( P-77), equipped with active radar homing type 9B-1348E. The range of "capture" targets with an effective reflective surface (EPR / EOP) of the order of 1,5-2 square meters. m (the F-16C multipurpose fighter with weapons at the nodes of the suspension) for this radar is about 70-75 km in an interference-free environment and 50-55 km in a more difficult jamming environment (when Turkish F-16C crews use EW AN / ALQ containers -131/165).

Nevertheless, the modernization “package” of the MiG-23-98 also boasts the ability to integrate into the avionics of a multi-range individual countermeasure fighter capable of reducing the range of its “capture” via the “falkonovskoy” airborne radar AN / APG-68 (V) 9 from 95 up to 50-60 km, respectively. As a result, when using the more maneuverable (in comparison with the AMRAAM family) guided air combat missiles RVV-AE, equipped with lattice aerodynamic rudders (provide maneuvering with 30-35G overloads), the MiG-23-98 could give a serious rebuff to the Turkish F-16C Block 50+ heading for the interception of the Syrian Su-24M.

No less significant advantage can be considered the possibility of integration into the electronic base of avionics of MiG-23-98-3 fighters of terminals of a two-way asynchronous data exchange line via a secure radio channel providing radio correction of R-77 missiles (and their more advanced version RVV-SD / “Product 170 -1 ”) on all parts of the flight path, which, together with on-board terminals of the K-DlAE type, would provide the possibility of intercepting Turkish F-16Cs by target designation from Russian long-range radar aircraft barrage over Latakia and Idlib the full detection and control of the A-50U, as well as multi-purpose fighters Su-35S with "farsighted" radar N035 "Irbis-E". At the same time, this SUV operation mode would provide the Syrian MiG-23-98-3 pilots with the opportunity to “land” by far more than one link of the Turkish F-16C without the need to activate their own airborne radars and subsequent rendezvous (for more stable tracking of Turkish fighters using electronic warfare systems), which would ultimately minimize Turkish AMRAAM retaliation.

Unfortunately, neither from the expert circles at the Russian defense ministry, nor from senior representatives of MiG RSK JSC and Fazotron-NIIR Corporation, there were no initiatives to provide the Syrian Air Force with such a “package” of military-technical support, and our a key Middle Eastern ally can use MiG-23ML fighters with huge modernization potential only as carriers of high-explosive fragmentation blanks for delivering attacks on Islamist formations in Bolshoi Idlib.

We are in Yandex Zen
Critical alignment in the sky of Idlib. Are Russian aerospace forces ready to compensate for the “lameness” of Syrian air defense?
There is no right to error. Will the C-300 be saved from the new IDF tactics?
185 comments
Information
Dear reader, to leave comments on the publication, you must to register.