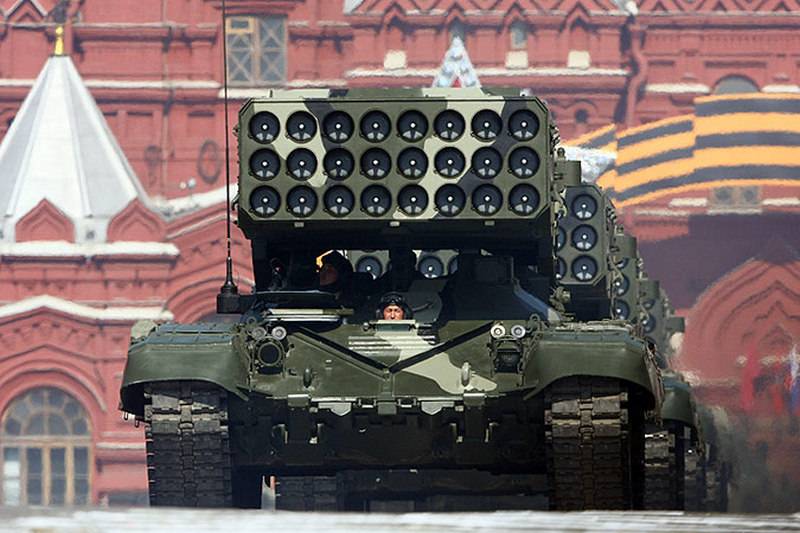 The latest TOS-2 Tosochka heavy flamethrower system will be shown for the first time at the Victory Parade on May 9, 2020 on Moscow Red Square. This was reported by the press service of the Ministry of Defense.


According to the military department, nine TOS-1A Solntsepek combat vehicles and four TOS-2 Tosochka combat vehicles will take part in the parade. All equipment has already arrived in Alabino, where it is preparing for training.

Earlier it was reported that the first batch of the latest TOS-2 heavy flamethrower systems will go into trial operation on Victory Day in the Great Patriotic War.

According to Igor Kirillov, the head of the radiation, chemical, and biological defense forces, the development of the promising heavy TOS-2 flamethrower system, previously called the Tosochka, should be completed by the spring of this year, and by May these machines should already be in trial operation of the flamethrower units RKhBZ troops. It was reported that new flamethrower vehicles will take part in the Victory Parade on Red Square on May 9, 2020.

The TOS-2 heavy flamethrower system was created on the basis of the TOS-1 "Pinocchio" and the TOS-1 "Solntsepek", but unlike them it has a wheelbase and improved tactical and technical characteristics. Earlier it was reported about the possibility of creating new ammunition for TOS-2. The machine was created taking into account the experience of using such weapons in the course of hostilities in the Middle East.